Trauma, Memories, Love: An Interview with Emma Vieceli and Claudia Leonardi on ‘Life is Strange – Partners In Time: Tracks’

on April 24, 2021
The fourth volume of the comic series based on the critically-acclaimed, BAFTA-winning video game Life is Strange brings together writer Emma Vieceli (BREAKS, Olivia Twist, Young Avengers, Doctor Who) with artist Claudia Leonardi and colorist Andrea Izzo to follow up the weird and wonderful tales of time traveller Max Caulfield, as she embarks on a road trip across America that gets mirrored by Chloe (her love) and Tristan (her newly found and lost friend) in the parallel universe she’s trying to reach.
To get further into the story and the creative process behind it, our own journalist Duna was able to interview both Emma Vieceli and Claudia Leonardi about the inspirations and nuances of this emotional tale, and you can read the result below. 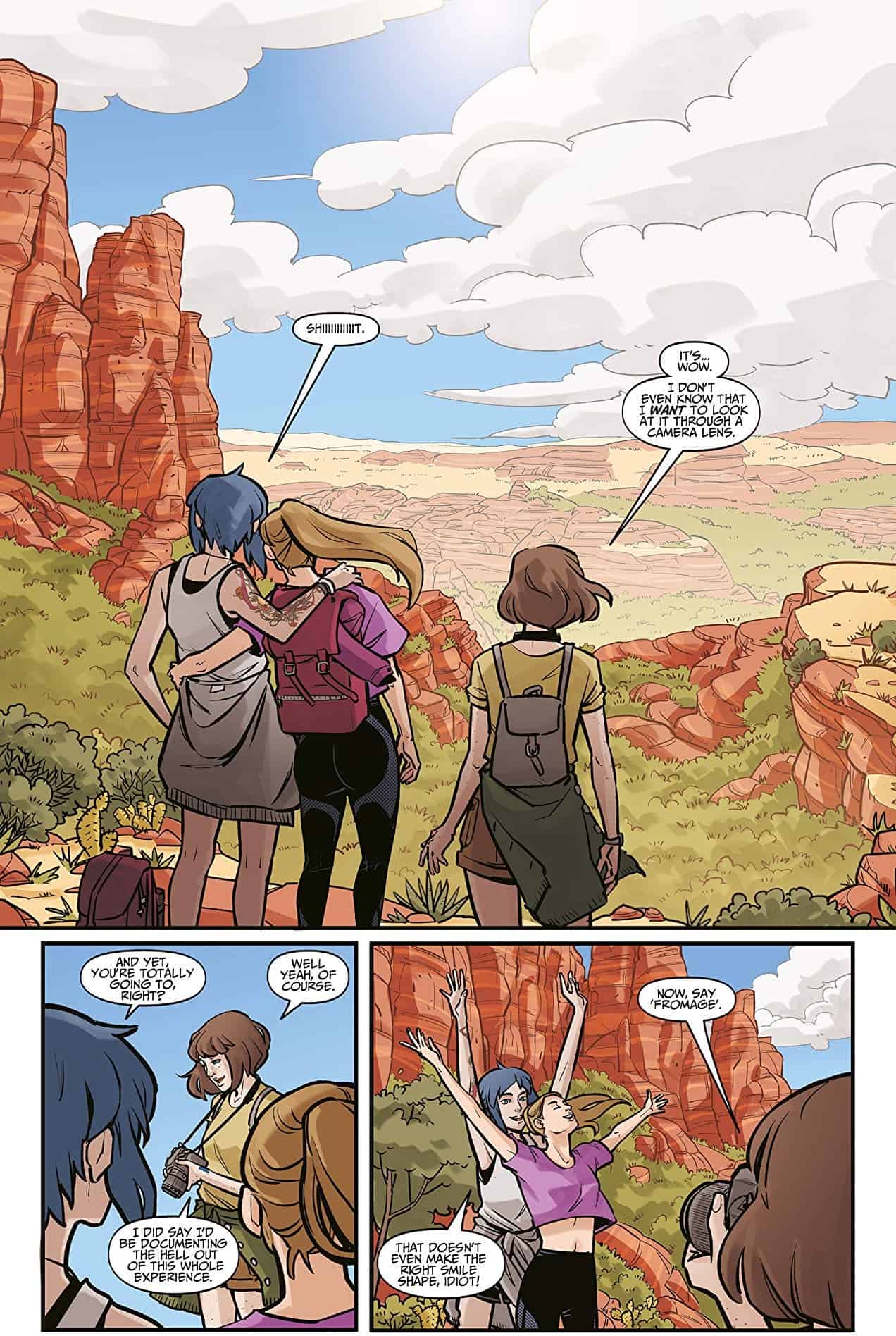 Comic Watch: First of all, thank you both so much for talking with us at Comic Watch! ‘Partners in Time – Tracks’, the fourth volume of this Life is Strange ongoing, is visually placed within nature, open scenarios, camping… What was the inspiration for the art background that came out of it?

Claudia Leonardi: The main inspiration I think were the actual places: I spent hours searching for tour videos and photos, to find the best views that would complement the story.  Google maps was my main guide!

Emma Vieceli: Honestly, a road trip is tricky. If characters are going to be on the move a lot, you want to make it worth their (and our) while. As a result, we did a whole ton of research into the journey the girls would take, and – well – we weren’t going to throw that away! So obviously if the gang are in a great location, we’re going to show that. The camping element also makes Max and the waves Chloe and Rachel’s world feel somehow smaller and just for then. They’re in the wide world, but Gladys is their home. It’s them alone with that world at times. It’s a way of bringing the personal into something vast.

CW: The structure of the story is shaped like a road trip mirrored by the two teams of protagonists in the two ‘universes’, as Max tries to reach for Tristan and her Chloe on the other side. How was the visual and narrative work in putting scenes intertwining with each other, like a dance between the two stories?

EV: There’s a lot of hair wringing and brain thumping in any time travel story, and this is no exception. Writing two universes and the small ways that they can weave and dart, sometimes meeting, sometimes not, was less of a dance and more of a battle with my own mind at times.  As we’ve tried to with the series so far, this arc requires a bit of work on the part of the reader too, which I like. It’s not easy to keep ‘track’ at times. See what I did there? I like seeing how interactive I can make a static comic and, sometimes, that’s about giving us a chance on reading to go back and sift through what we know. We’re building both timelines as we go.

CL: Art-wise I keep people and places similar, but with small differences that an attentive reader can see. I try to make recalls of scenes that happened in one timeline into the other to keep the feeling of “somewhere, this thing happened differently” going. 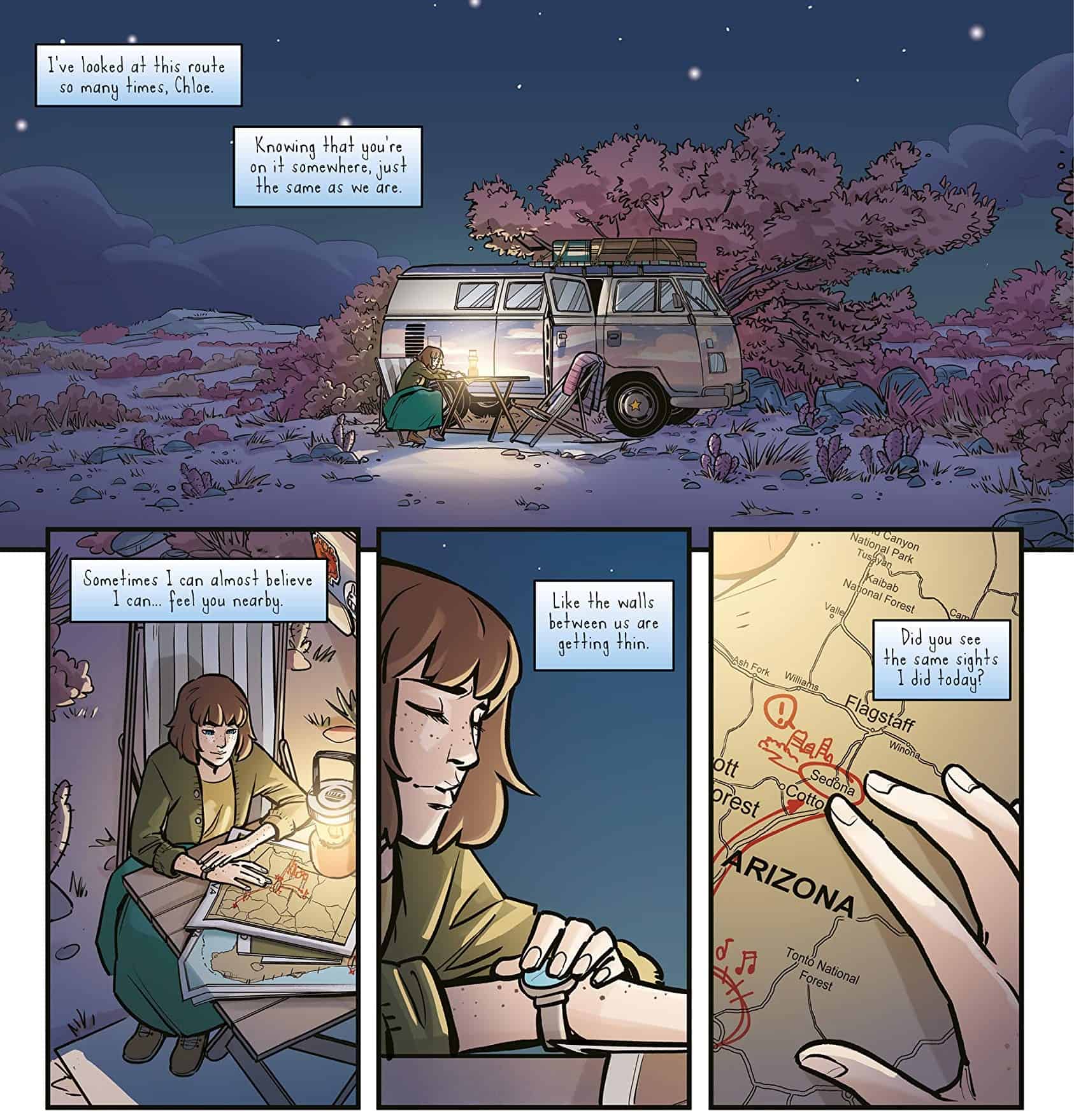 CW: As the volume unfolds, the story references heavily some of the past fear and traumas of some of the characters, especially Max, and it even has a character from the videogame coming back to bring one of the Chloes’ lost memories. How is it for you as creatives working on some themes that touch on trauma, memories, how we interpret and process them? How much of yourselves do you put in the storyline?

EV: It’s a precious and a heavy thing. A privilege to be able to tell such stories, but also there’s a responsibility there. Everyone is different. Everyone processes trauma differently. What we approach in the comic can’t speak for anything on a wider level, but if it hits any beats that do resonate with readers, that’s good. I do put a bit of myself into Max, if I’m honest. It’s hard to write something and not. I’ve done battle with chronic anxiety and depression (like so many of us) and so it’s hard to entirely separate out parts of Max’s overthinking and self-blaming from myself at times. That said, the original game gave us such rich characters that getting into their heads is always interesting, so my own head is barely needed – thank goodness!

CL: I’m not involved in the writing of the story, so all I can say is that Emma did an amazing job writing Max and the others while they process all that happened and deal with the consequences of their actions. It was one of the things I felt was missing in the game ending that I chose. The conversations (real and dream conversations) between the characters that touch on those subjects, are my favorite part of this comic, and I feel a lot like a fangirl every time I read a script for a new issue!

CW: As an LGBT+ fan of Life is Strange and your work, I love that you brought more LGBT+ romance stories to this fourth volume on top of the two main ones. Is this something on purpose or that comes off naturally for you both?

CL: As part of the LGBT+ community, I guess it comes natural to me. I always searched for this kind of relationships in the media (falling for queerbaiting more times that I’d like) and I’m happy to be working on a project that doesn’t treat this kind of relationships as different, strange or a sort of token to keep the audience engaged. Being “just the artist”, the story part is all up to the writer, and I think Emma’s talent in writing characters and relationships makes them natural and I never get the feeling two characters are forced together.

EV: I’m so glad to hear that you’re enjoying that element, and thank you! I’d say it’s a natural thing for me because I like relationships and connections between human beings, no matter what those people choose to be for themselves or what labels the world chooses to throw at them, you know? If a connection feels right in the story, it’ll come through naturally. I don’t often feel the need to stop and consider ‘but this is an LGBT+ relationship’ because – for me – whatever the relationship is, it will have come through naturally from the story – so it’s right. If that makes sense. I’ve spent nearly ten years now co-creating BREAKS, which is an LGBTQ+ webcomic about two teens growing into themselves, so I guess – yeah – the short answer is that it definitely feels as natural to write those relationships as those relationships are, generally.

Life is Strange Vol. 4: Partners In Time: Tracks is published by Titan Comics and is available in bookstores, comic shops and online via Amazon, Forbidden Planet and digital download.

Trauma, Memories, Love: An Interview with Emma Vieceli and Claudia Leonardi on ‘Life is Strange – Partners In Time: Tracks’