The Signal: Who is the Newest Member of the Batfamily?

As a Gotham native, victim of the Joker, former member of the “We Are Robin” movement, and now a vigilante in the Batfamily, Duke Thomas isn’t just another Robin. He is something new…he is The Signal! 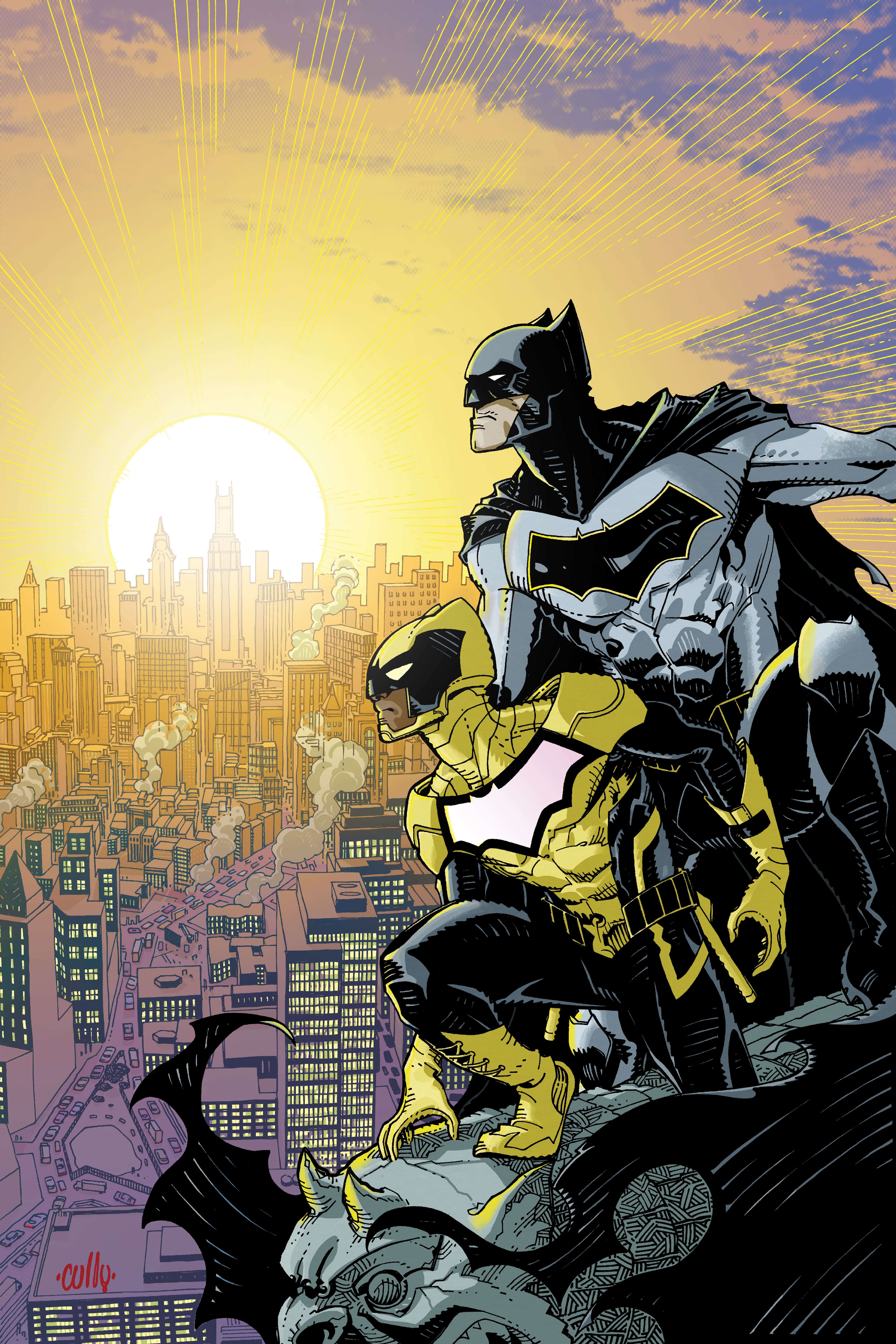 Who is The Signal?
During “Zero Year”, when the Riddler cut the power to Gotham in a challenge to the city, we are first introduced to Duke Thomas as a promising student. After he and his family saved Batman and provided an area of safety while the Riddler overtook Gotham, Duke began working to save the city by creating a riddle that even the Riddler himself couldn’t answer…

It would be years until Batman and Duke met again, this time it would be under much worse circumstances though. As part of his “Endgame” plan, the Joker kidnapped Duke and his parents in an attempt to recreate the trauma of Batman’s childhood and force him to watch. 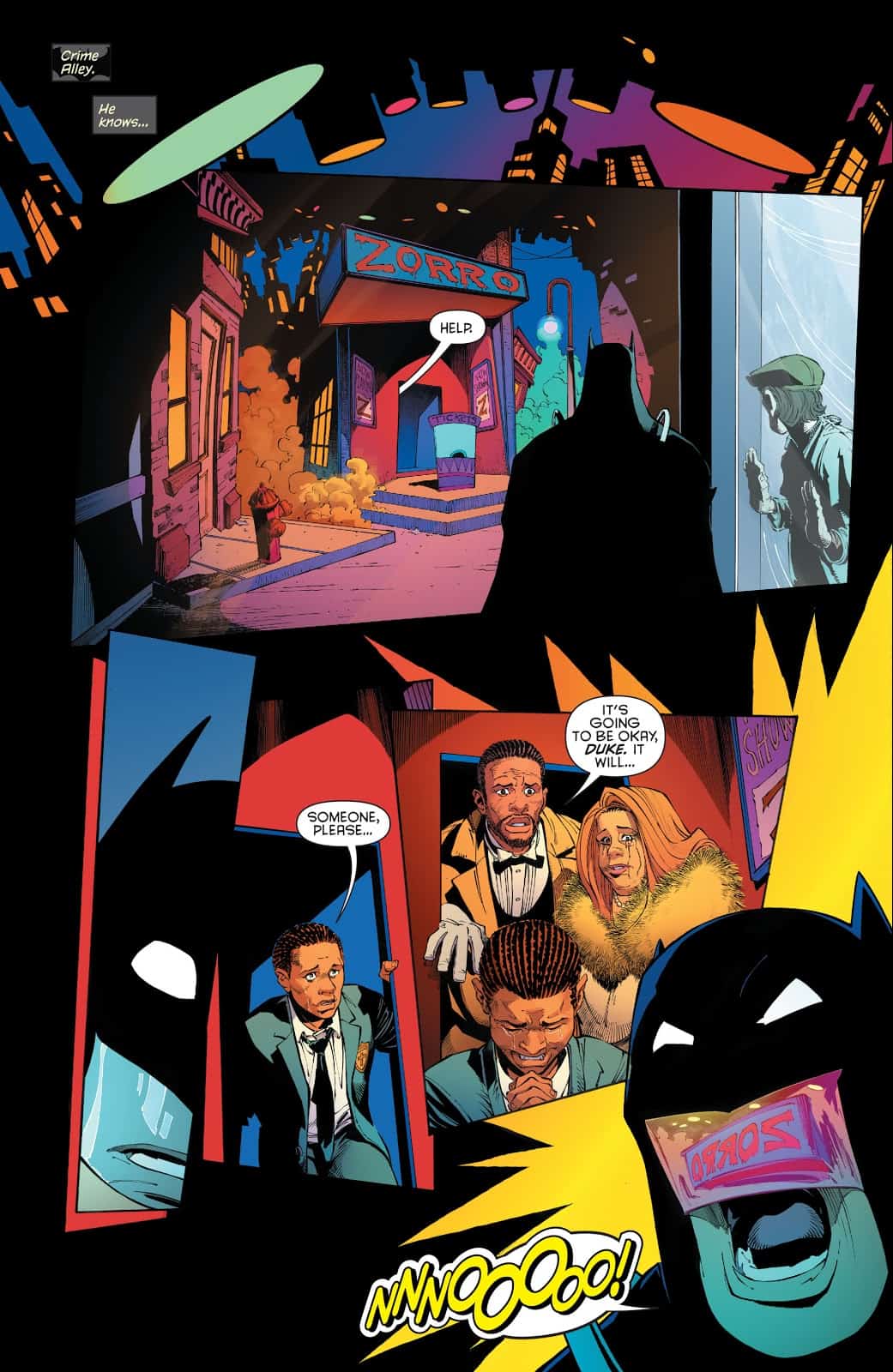 Batman was able to rescue Duke Thomas, but unfortunately, throughout the chaos, his parents succumbed to the Joker’s toxin. This left Duke as an orphan, forced into the foster system where he would bounce from home to home, still feeling the despair of losing his parents, but yearning to find them again. He eventually ventures into the sewers in a desperate search born of guilt where he encounters a makeshift city filled with citizens hellbent on bombing Gotham.

Fighting alongside the Robins of Gotham City, Duke Thomas is able to escape with his life but is immediately knocked out afterward. He awakens in what he thinks is a room in a police station, but through confusion and anger, eventually discovers that it is, in fact, an empty warehouse. Just outside the room that held him captive is a motorcycle with a jacket on top featuring the Robin’s “R” logo and a cell phone.

This cell phone would be his ticket to the “We are Robin” movement, where Duke Thomas takes on the mantle and fights for Gotham City as a Robin vigilante. Eventually, due to the actions of a single member, the movement resulted in a “Robin War” event. This led to consequences so harsh that laws were implemented to both prohibit Robin paraphernalia in Gotham and encourage others to stop potential members.

Even though Bruce Wayne “died” fighting the Joker during the “Endgame“, the mantle of Batman was eventually taken by none other than Jim Gordon when a villain named Mister Bloom began wreaking havoc on Gotham. During this time, Duke would act as a vigilante once more and aid in the fight against Mister Bloom in a way that he felt Batman himself would do. 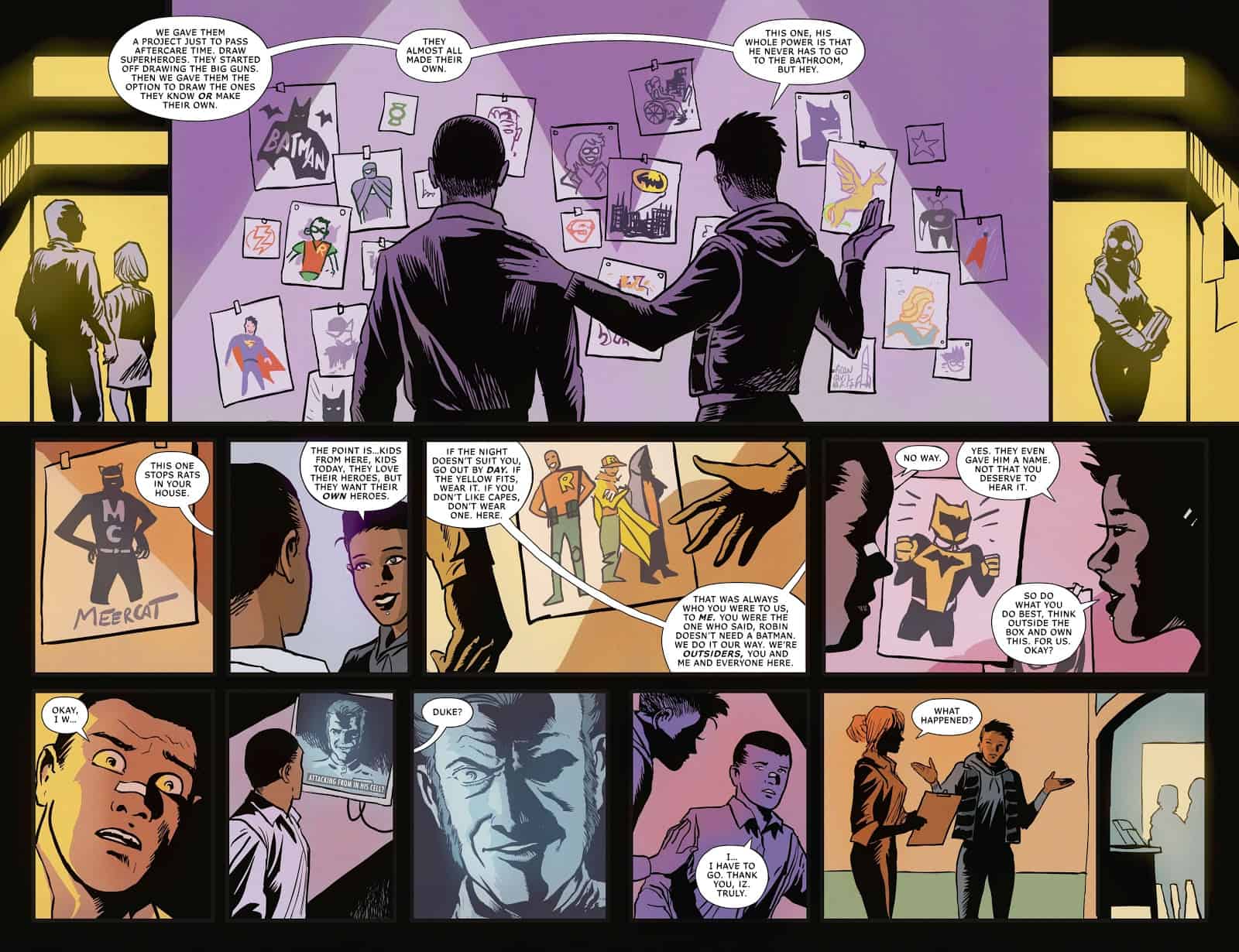 Although he lost most of his memories, Bruce Wayne soon regained the mantle of Batman and offered to properly train Duke Thomas, but this time he wouldn’t take on a new Robin. He told Duke he wanted to try something else, something new. Then he unveiled a suit just for him. 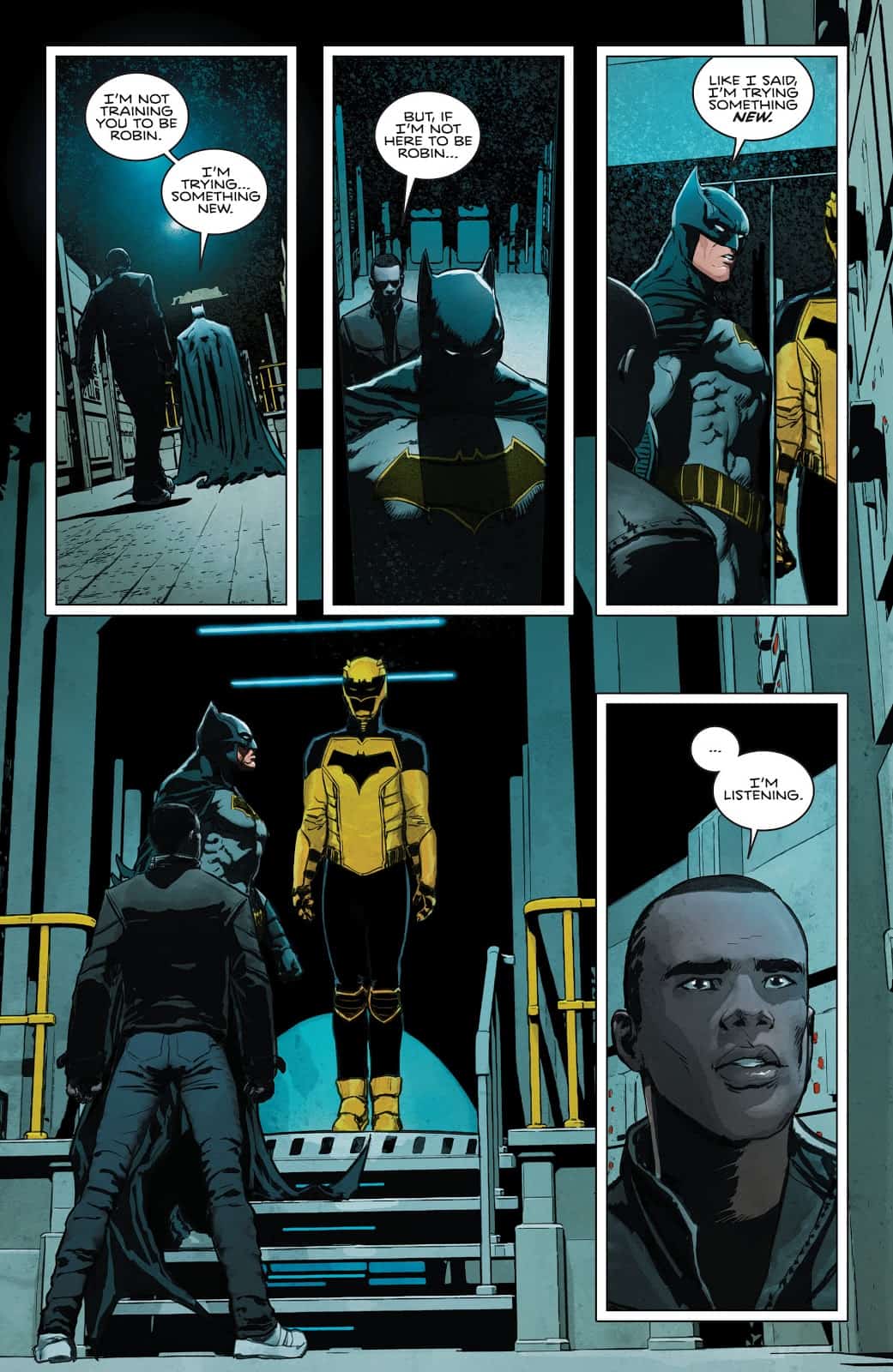 Their teamwork would lead to Batman and Duke stopping villains such as Two-Face, Riddler, and the original Mister Bloom together. His training during that time would also lead to a discovery of special abilities that he never imagined possible for himself… 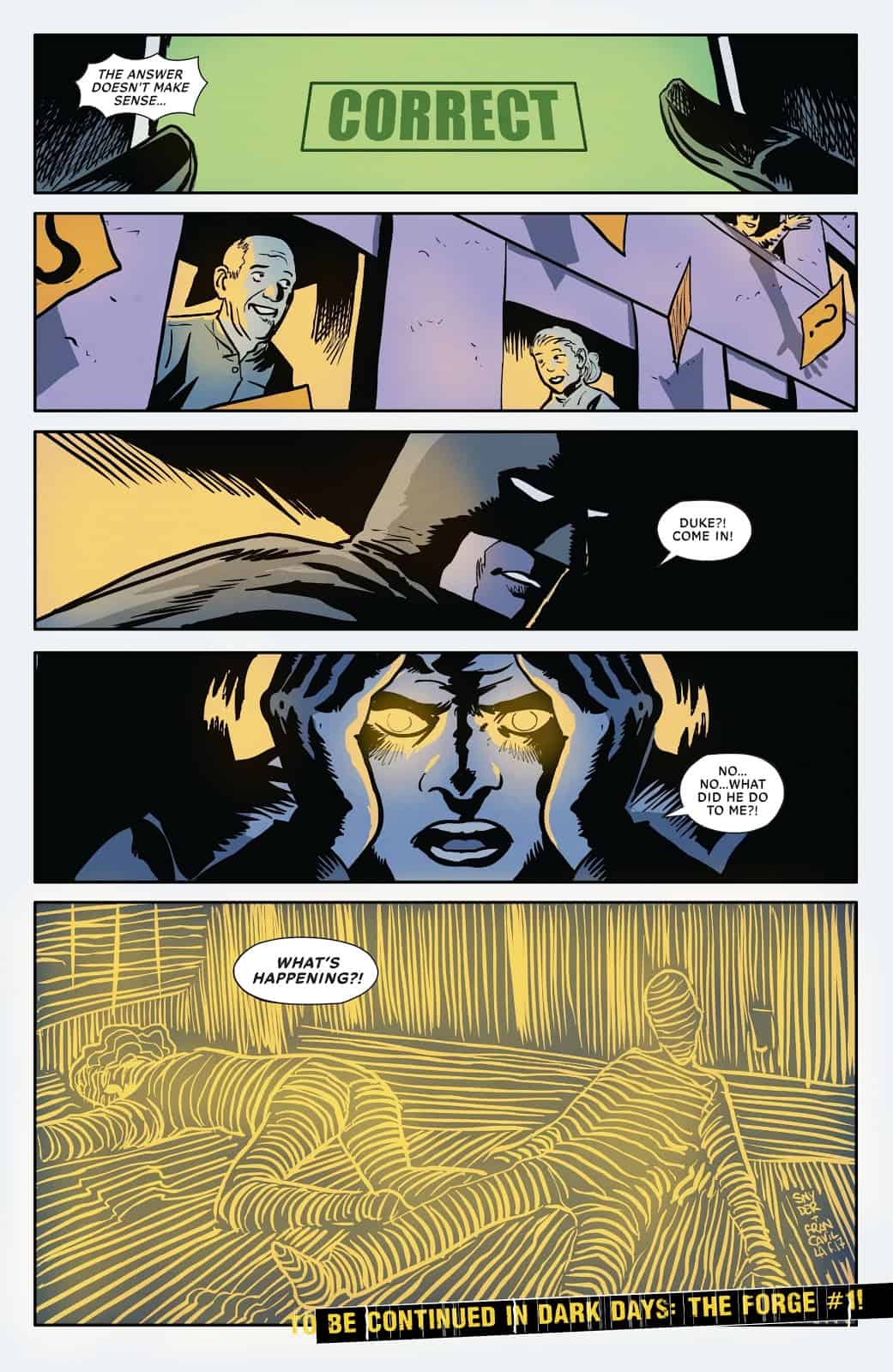 As Batman delved into the mysteries of the Nth metal that resurrected him after “Endgame”, Hal Jordan and Duke Thomas’ attempts to decipher clues left in the Batcave led to the discovery of the Joker himself being held prisoner. After a hasty battle, the Joker manages to disappear entirely, but not before revealing to Duke that he knew who he really was. A meta! Using his photo-kinetic powers, he sees a path forward for Batman… 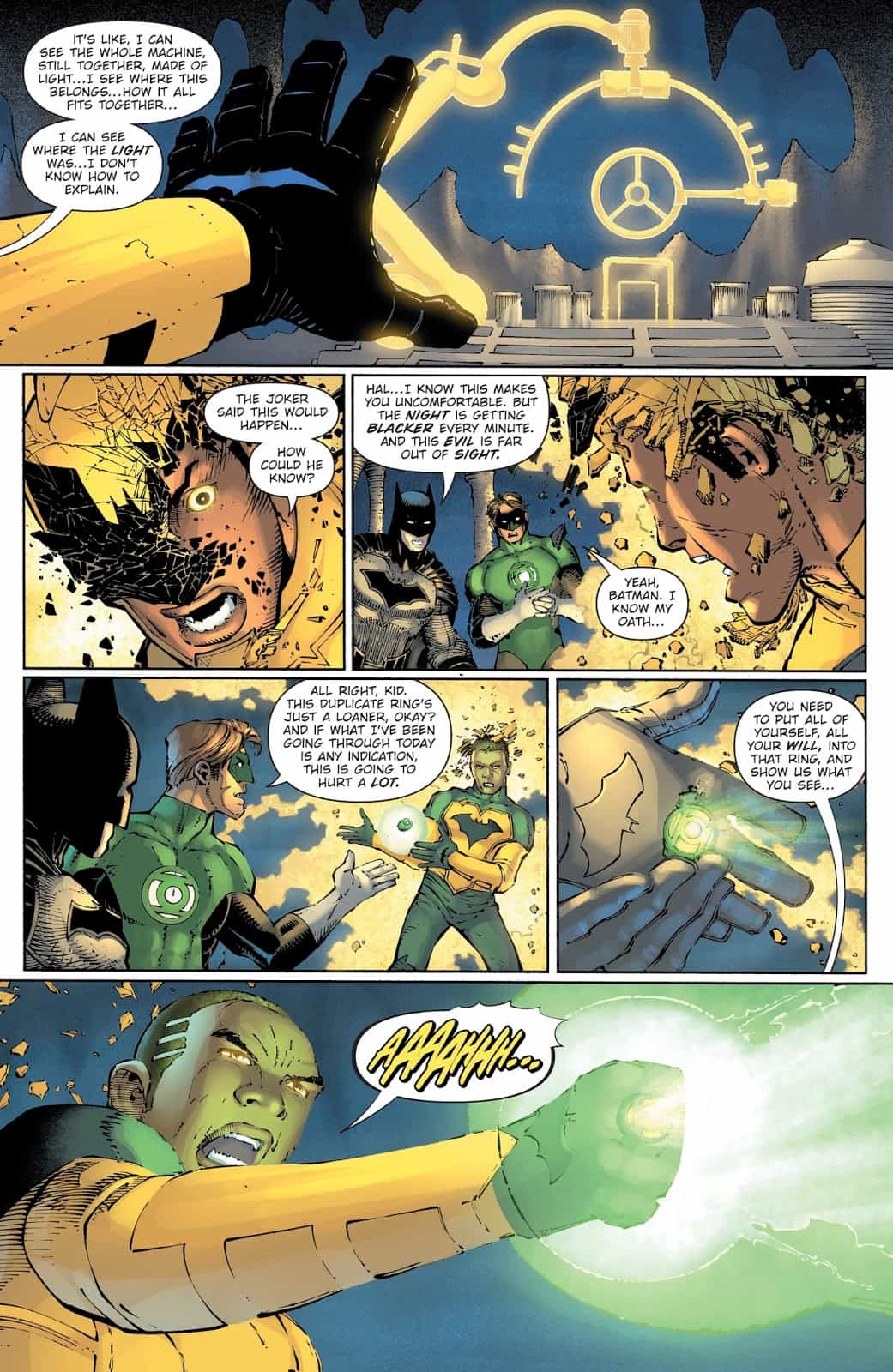 Now Duke Thomas is The Signal, Gotham’s vigilante protector by day. Starring in his own three issue mini-series from the pages of metal “Batman and The Signal“, he is ready to discover more about not just his role in the Batfamily, but also his own approach to taking on crime in the city!

“We wanted his abilities to be powers of detection, not big super powers like being able to fly around or something like that. We just wanted to give him a different way of seeing, because Gotham by day is something that Batman doesn’t see, being a nocturnal hero.

So when Duke goes to a crime scene, he absorbs light faster than we do, and he can manipulate the way that he processes light. He can see 5 to 6 seconds of what happened before, by seeing the ghosts of light that hit the objects in the room. So he can look back at the history of light in a room and see what happened right before.

Imagine a crime scene for him, gives him these powers of detection that are really, really helpful that can open up whole new doors. Especially for a teenager at school, and he goes to the locker and a girl passes by him and he sees 5 to 6 seconds earlier, he sees her saying to her friend what a geek he is, so it’s an emotional power as well. It also plays right into his personality.”
– Scott Snyder

“Batman may own the night, but with new villains emerging during the day, he needs an ally to defend the city when he can’t. Only one teen is up to the challenge; Duke Thomas. After months of training, he’s ready to step out of the shadow of the Bat to become his own kind of hero. Meet Gotham City’s newest protector: the Signal! Spinning out of adventures in ALL-STAR BATMAN and WE ARE ROBIN, comics superstar Scott Snyder and newcomer Tony Patrick take our young hero to new heights in this exciting miniseries with artwork by Cully Hamner.” 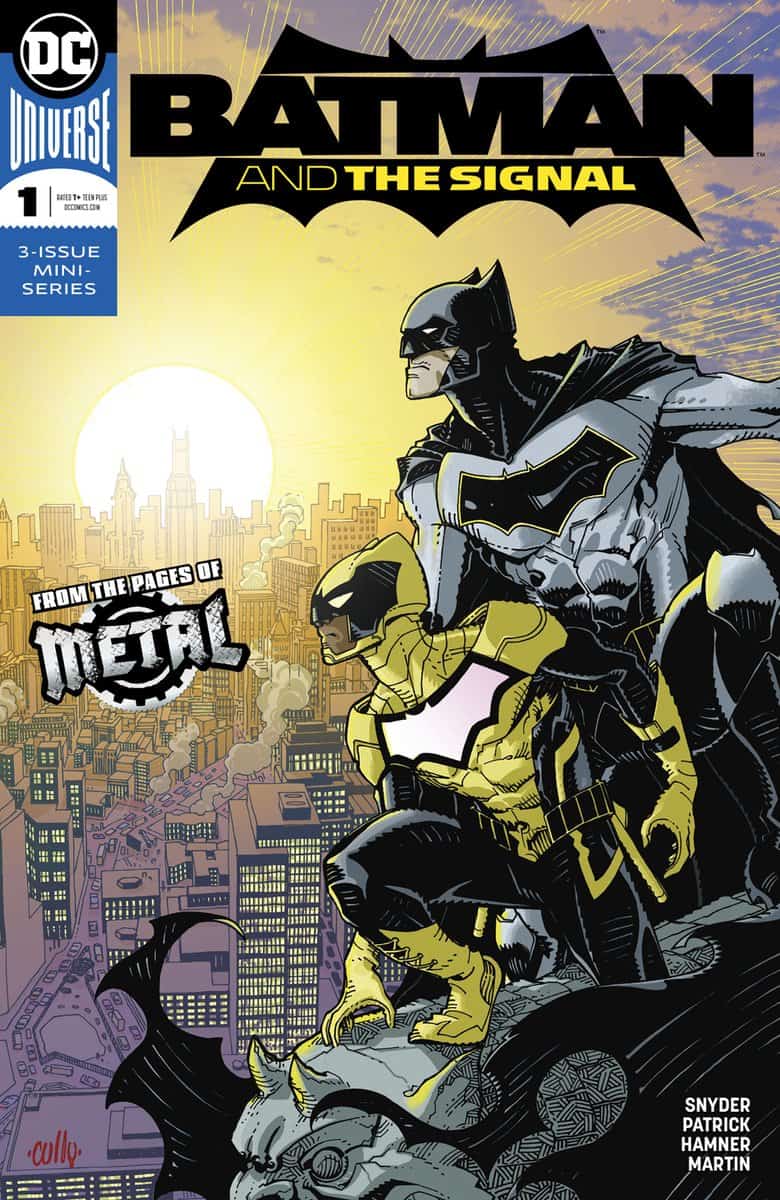