Why I Say Comics Author (And Why That Might Be Wrong) 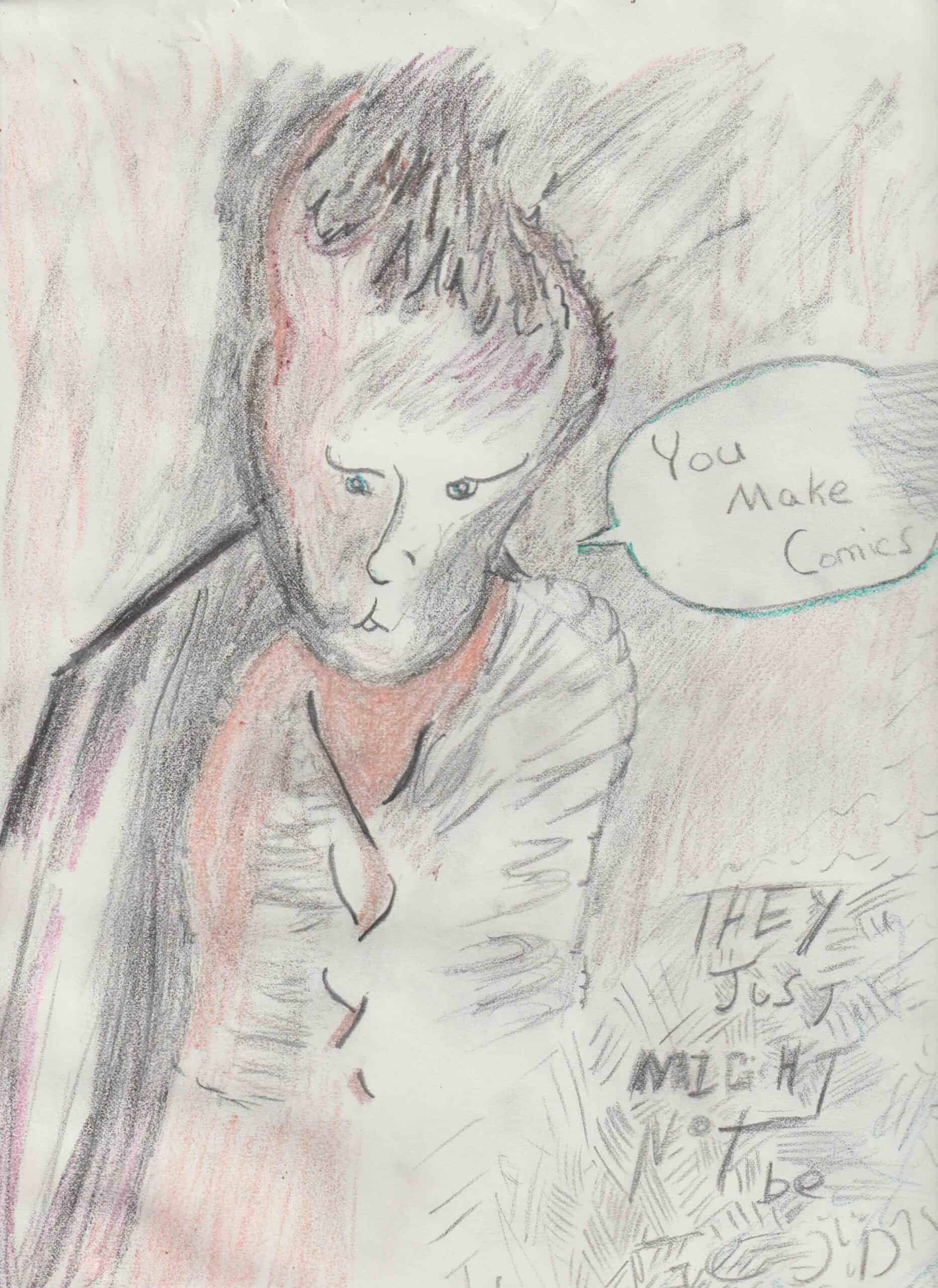 Whether you are a real comics author is not the high bar and it never should be.

Sometimes we are mad because too many people privilege the writer of a comic, the scripture or plotter, and treat them as the only author, the others as accompaniment. Sometimes, we are annoyed because someone has gone penciler-first, who they will call, “the artist,” because we know that the rest of the team also works visually, even the scriptwriter. The current writer on Detective Comics has been called, “not a real comics writer,” recently, and everyone from Olivia Jaimes to Bill Sienkiewicz have been called out as not real comics artists. The current drum to bang is that online comics are not real comics or maybe they are, but the folks who make them are definitely not professionals, no matter how much money they make or how many comics they make; they just are not real. 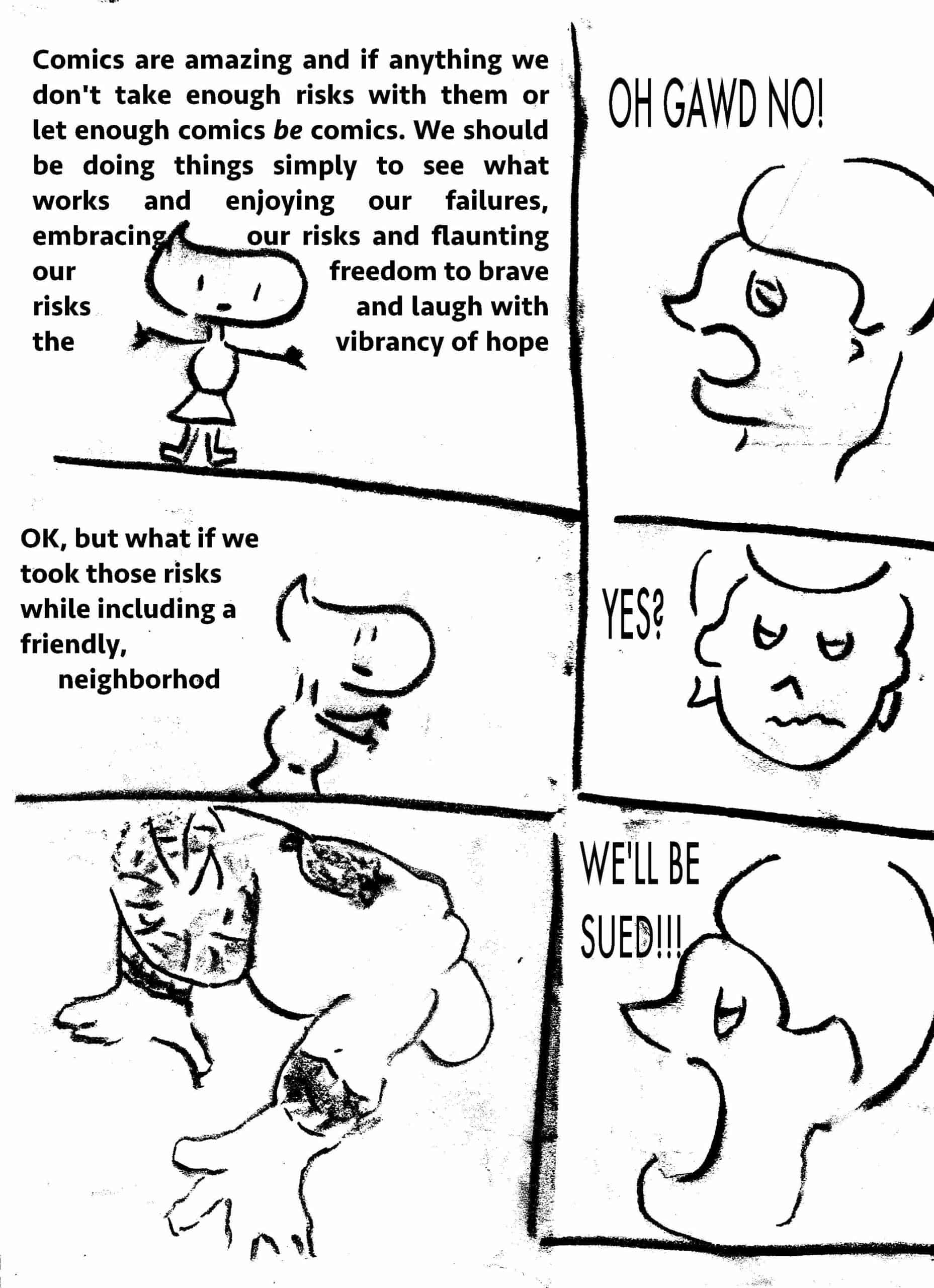 Make your comics! Make comics for whoever! Go wild!

I made comics as a child, through my teens. I have made comics with children, with students, with family. When I was potentially dying, horribly sick, and unable to move under my own power from bed, I made a comic with small squares of paper, a broken pencil, GIMP, and a lot of arbitrary rules as to how many seconds I could spend per panel or whether I was permitted to erase or redraw (I was not), that ended up involving photographs of the wooden nightstand I worked at, because in my feverishness, I believed showing the table somehow added depth to a comic I was not allowed to correct mistakes in.

The Hammer Crumpled When it Hit the Nail and Became a Cloud. Open images for legible size.

Making comics can be your occupation. It might be one of several you have to keep the rent paid and the shoes with soles.

But, you may also make comics that you will not immediately financially profit from. Most people who make comics professionally do that, too, or did. Because nobody in comics is making big bank on comics. Sometimes comics are about money, but often they are about expression, about entertaining, about communicating, educating, about fun and hope and terror and warnings and love, nostalgia and yearning. Sometimes comics are just about keeping yourself alive.

Emphasizing the money, focusing on finance as the delineator of truth or quality will only burn you. The biggest money is never paid for the best things, and the best things for one person are not the best for the next or the next to next.

It is unlikely you have read a comic made by a billionaire except maybe for Pluggers, which began with brainstorming, plots, and characters devised by CEOs and businessmen of rank, processed through a Pulitzer-winning cartoonist for reasons mere mortals may never understand. Now, the plots and gags are largely generated by working class fans, for reasons we may never understand.

Why is it this simple to scam people though? To convince comics fans, comics readers, comics experts that something obviously a comic is not a comic? That someone who obviously makes comics is not a real maker of comics?

Partly, it is because we cannot agree on a term for a person who makes comics. We compartmentalize or prioritize. We call the scriptwriter the writer, as if the letterer is not literally writing down the words or the artists are not narrativizing and adding symbolism, atmosphere, and details. We say artist most often when we mean the penciler; rarely when we mean the inker or finisher or colorist, never when we mean the letterer, though certainly comics letterers are artists and work in art.

Occasionally, someone will borrow from Japanese, and invoke the term, mangaka, which essentially means the maker of a comic, however, many mangaka have assistants, from other artists to writers to specialists in history, firearms, politics, or trans or ethnic issues. A mangaka does not make comics alone, even if we ignore the importance and contributions of editors and publishers. 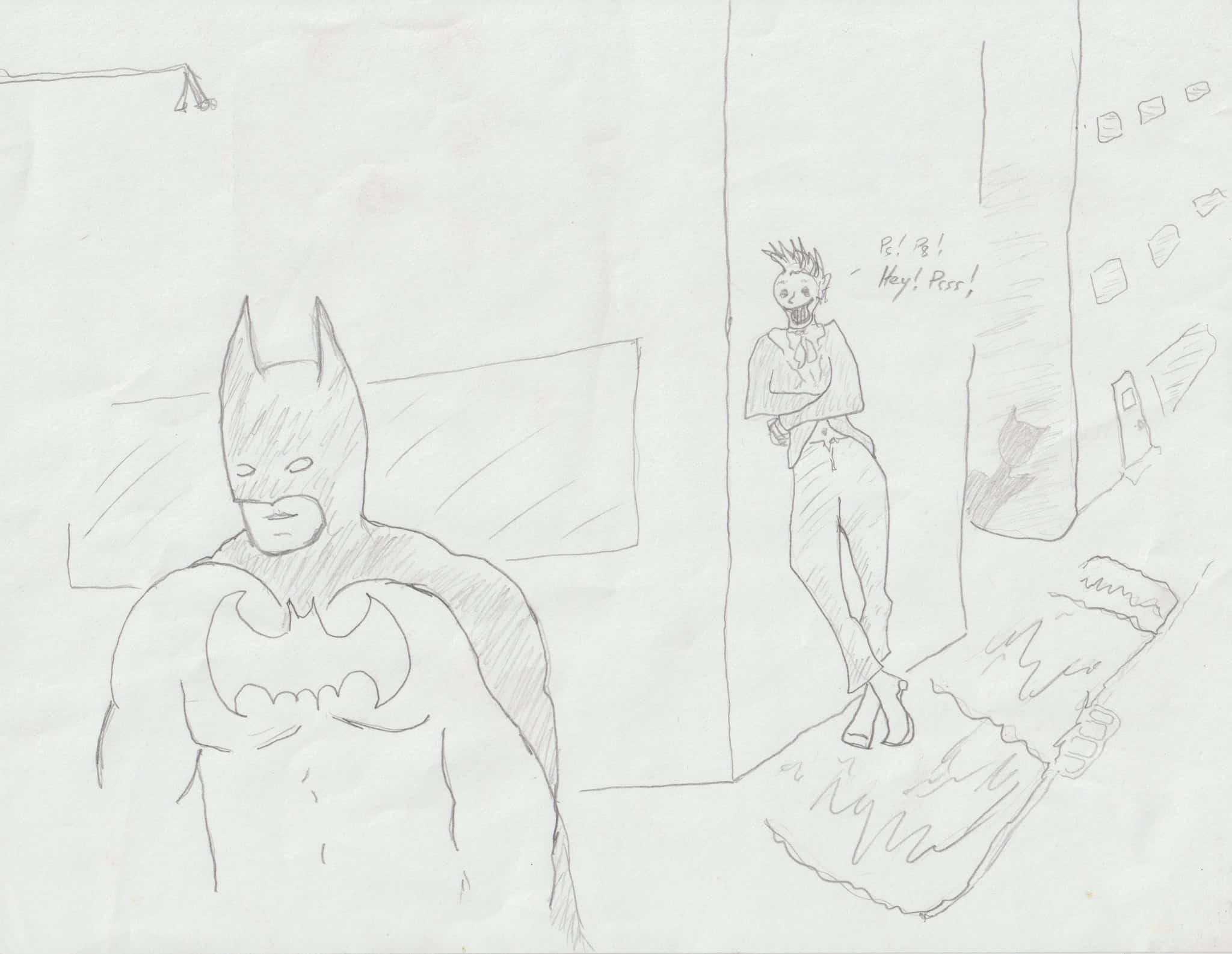 Psst Pssst! These aren’t the characters you think they are. Or, they are, and this is parody.

We can say, maker of comics, and I have. It is accurate while not stepping on anyone’s territory in particular. A maker of comics need not be a penciler, a colorist, a writer, per se.

We can say, works in comics. Which is used frequently, but most often for editors, touch up, and production people, secretaries and legal, et al. Or, for minorities or oppressed classes, because we have all read an article about a woman in comics or seen someone questioned about being a Black man in comics.

Works in comics carries intimations that are not fantastic.

We can ill afford the implication that any social group is less a part of making valid comics than others. Any group traditionally made into an outlier should be centered definitively. And, that is true of audiences as well as authors of comics, for what are audiences but late stage authors? 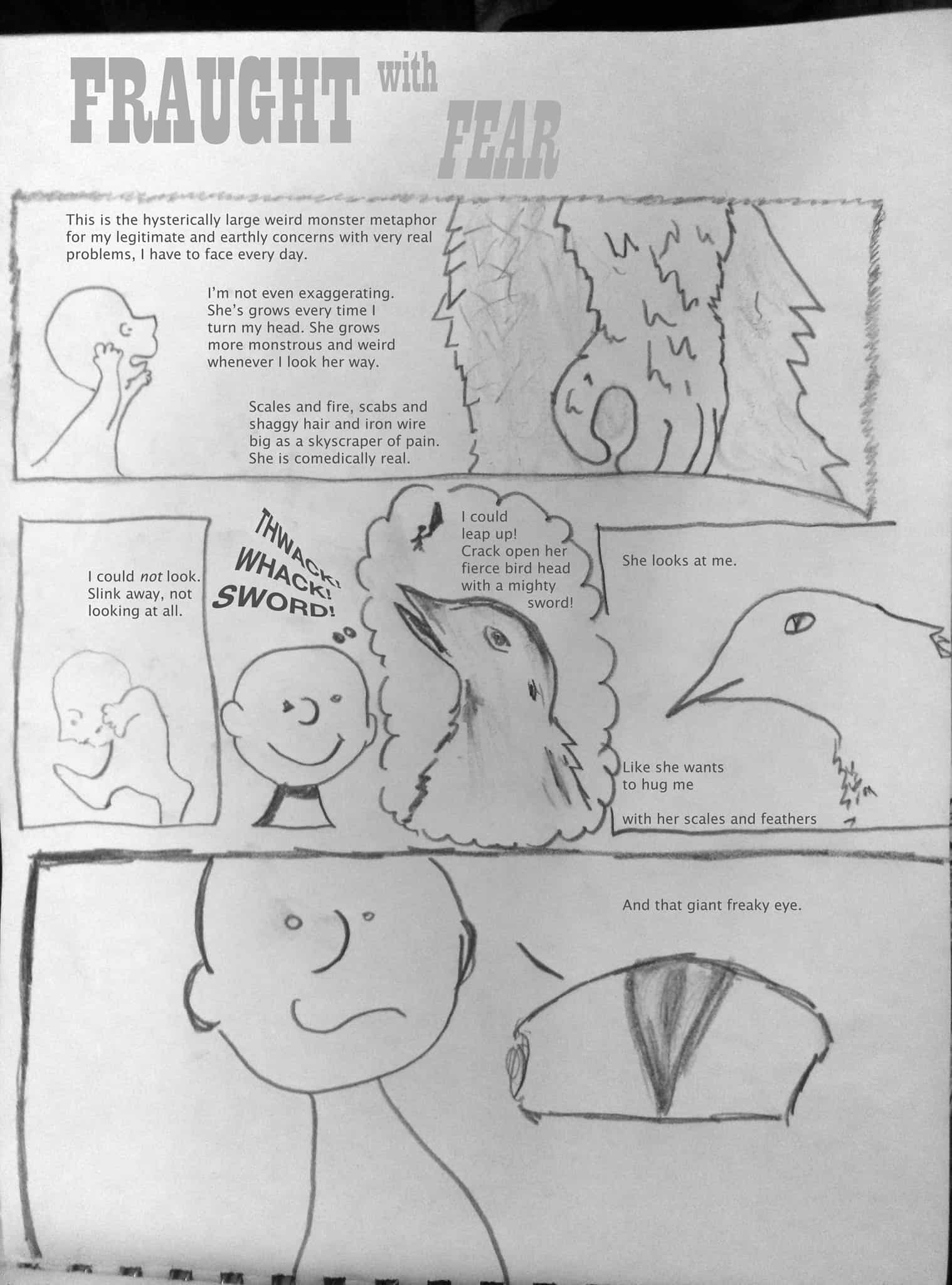 I try to speak, and to write of authors of comics. To allow comics to have multiple authors. To not make unnecessary value judgements on who is more, who is less the author of a comic. That prioritizing can get so weird, anyway. There are comics with men’s names on them who maybe contributed nothing other than being comics-famous in the moment, which is to say not famous at all but in comics we care for a second. Nobody in comics is really famous famous. At best, transitively, comics famous.

There are comics who have men listed as writers or co-writers who wrote nothing. There are comics where a penciler is listed as penciler or artist, but may have only done rough breakdowns or work that was so unusable another artist, an inker or embellisher, has had to do the heavy lifting, but will get the smaller rank.

When you write for the larger publishers of serialized, work for hire comics, Marvel or DC, the editor and even an assistant editor may do a substantial bit of writing on an issue, uncredited for such, or control the nature or details of the art so much they could be listed as co-artist, but are not. It is not uncommon for audiences to praise or loathe something an editor was responsible for, but the editor gets no praise or blame.

So, authors. Multiple and without valorization, valuation, or specificity of role. If we need to specify, we can. If it is unnecessary, and impeding discussion, simply do not. You do not have to valuate the roles, you do not need to rank them, especially if you are not one of the authors of that comic because you do not for sure know.

Author is still an imperfect term. English-language-speaking movie people still say it in French, because it does privilege the art of written letters, of words, over others, and saying it in French dilutes that enough for comfort. The French, I imagine, sort it out in their own ways.

Author is a better term than maker of comics or in the comics business. It is fairer than the writer/artist dichotomies. 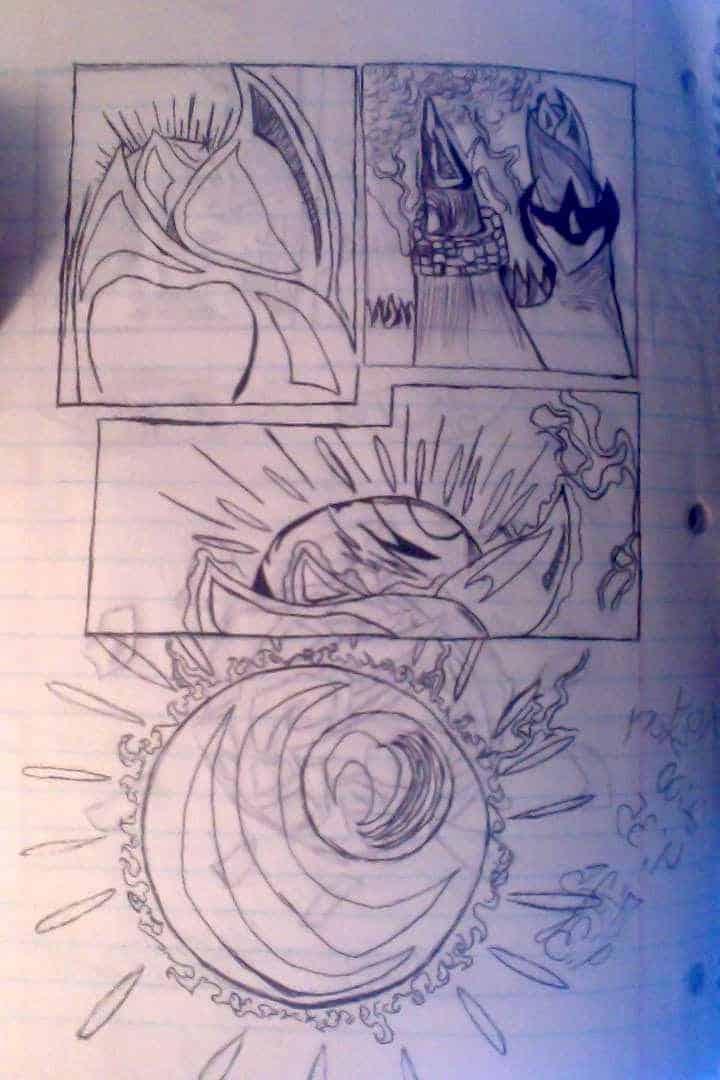 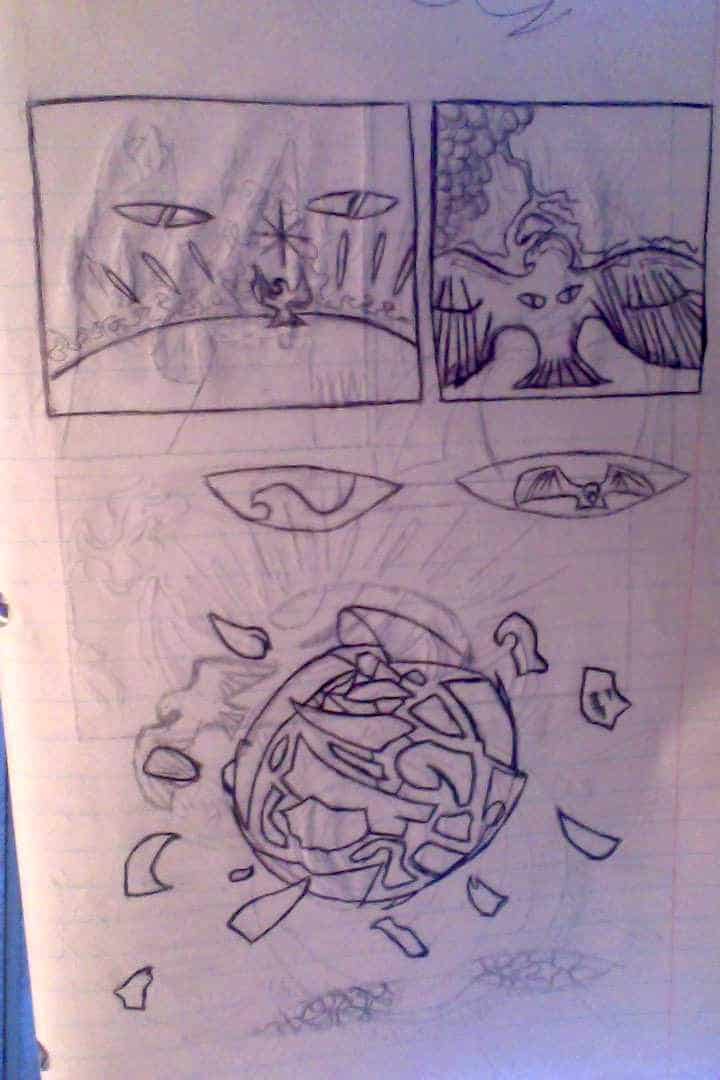 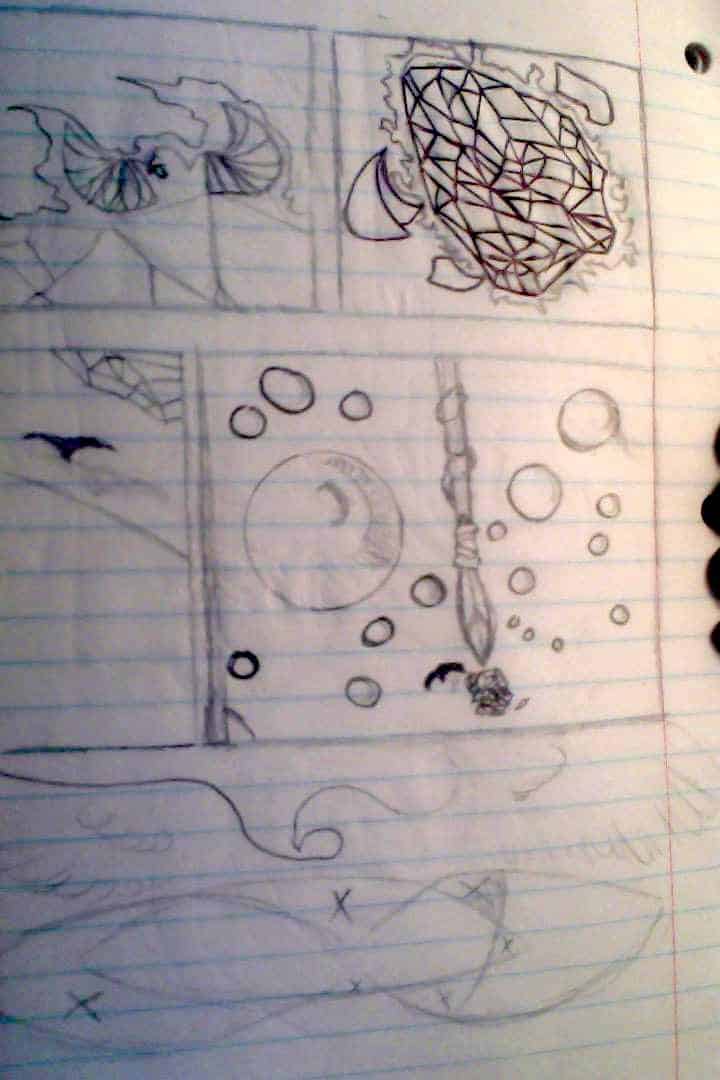 Comic made in high school or jr high in one of the million notebooks I collected.

The gatekeepers and grifters are not concerned with accuracy or honestly or earnestness. They will bully their way through regardless.

But, authors may give us just enough edge, playing off a preexisting privilege and a predetermined terminology, in leveling the field, to address all contributors of comics, of all comics, as people. As people of value and contribution.

Why I Say Comics Author (And Why That Might Be Wrong)