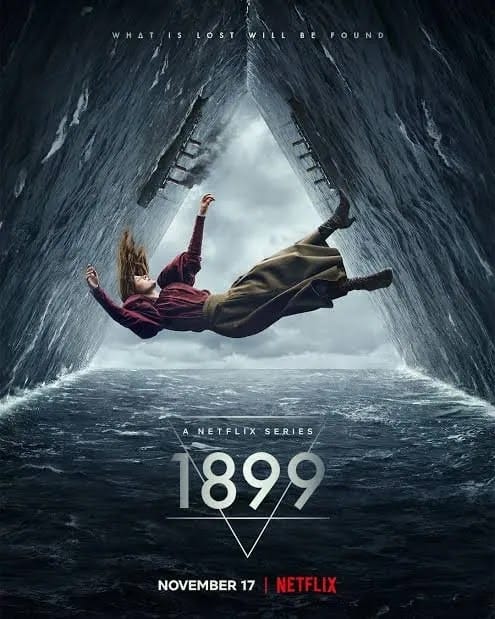 In 1899, a diverse group of migrants travel from London on a steamship named Kerberos to New York City where they plan to create a new life.  An encounter with a different steamship adrift on the open sea turns into a horrifying nightmare.

Sometimes a show comes along that is so good that it takes you by surprise.  If the first episode is any indication 1899 is just such a show.  This German multi-lingual spooky mystery horror thriller is streaming on Netflix starting November 17th.  Set in 1899, a diverse group of migrants are on the steamer ship, Kerberos, traveling from London to New York City.  Their reasons for the journey are almost as diverse as their nationalities, but they all are running away from something, optimistic that life in America will be better than what they left behind. Four months prior, The Prometheus, a steamer ship owned by the same company as the Kerberos, disappeared, and it seems many characters have a relationship in some way to the missing vessel. Although this is an ensemble show, the main protagonist seems to be Maura Franklin/Singleton (Emily Beecham), one of the first female neurologists in the UK.  She was allowed to study medicine, but women are not allowed to practice it in England.  She also harbors some dark mental and physical scars from her past, and she keeps reminding herself of who she is and that she is not crazy.  The sense of touch seems to give her flashes, but it is unknown if these are premonitions or memories, or a combination of the two.  Eyk Larsen (Andreas Pietschmann) is the sea worn captain who diverts the ship’s course when they receive a message from Prometheus.  The passengers and Crew are not happy about this diversion, but the captain persists.

It is hard for me to put into words why the first episode was so good.  First, this show has a large cast and normally that could possibly be an issue, so many back stories to tell and exposition to expose, but the first episode handles it all so expertly.  We don’t see much of many characters, but we are given enough to understand everyone has secrets and most are not what they seem.  There are clever clues in every aspect of the series that give us indication of what station in life each character exists in. Not only done in dialogue, but in how they dress, where they reside on the ship and how they are treated by other characters.  The script is amazingly well written with the dialogue informing the audience of what is going on, but never fully explaining anything.  It never feels forced or unnatural but has its own sense of poetry.  In addition, many characters do not speak English, but with the subtitles, this gives the audience information that some characters are not aware of.  The actors handle the dialogue like seasoned pros with many switching between languages.  Each adds the needed subtext through expression and movement, but even beyond that, they all have a certain charisma that compels the audience to take interest in them, to want to know more.  The themes of classism and sexism are present and not subtle, but you also don’t feel overwhelmed by it.

The atmosphere of this show alone warrants merit.  The use of light and shadow is reminiscent of the old black and white horror movies.  The music adds the appropriate tone for each scene creating an eerie vibe, and yet in its own way, it is quite beautiful.  The costumes are very well done, delineating characters and their station in life.  Several characters have scars that are subtle enough to not distract but pronounced enough to add a sense of danger and mystery to the bearer. Although there is nothing really supernatural until nearly the end of the first episode, there is a feeling of it throughout the program. I was rivetted and fully immersed in this world and felt compelled to watch.  There is not a single thing I would change in the first episode, and this should be a lesson on how to make the pilot of a mystery-horror television series.    I am lucky it is on Netflix and there is a long weekend coming up, I have a feeling I will be binge watching the entirety of the first season.

Nothing I write in this review can do the first episode of this show justice.  It is the best thing I have watched on television in a long time.  I truly hope that the rest of the series lives up to its pilot.