The S.H.I.E.L.D. Agents fight to escape their Kree captors and return home. 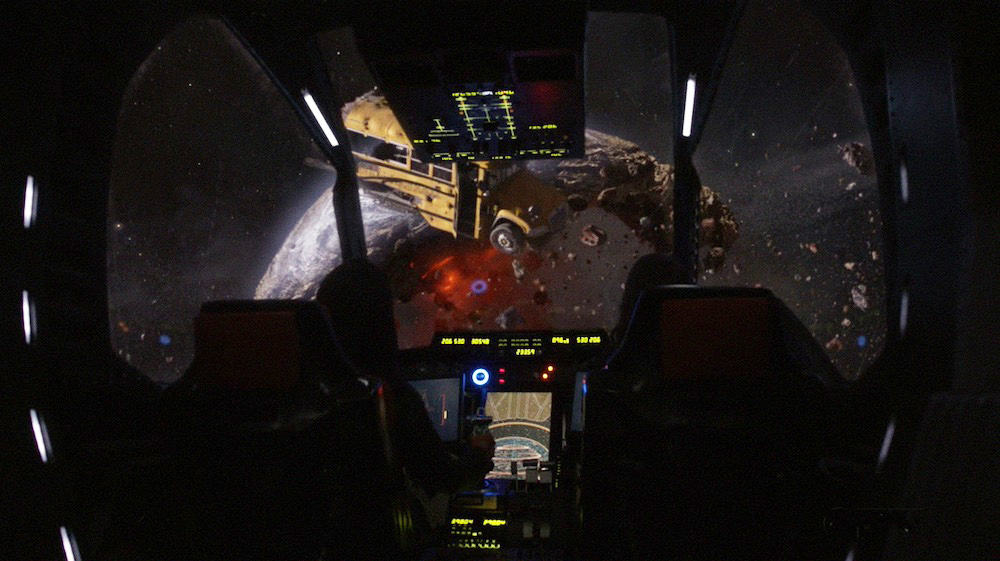 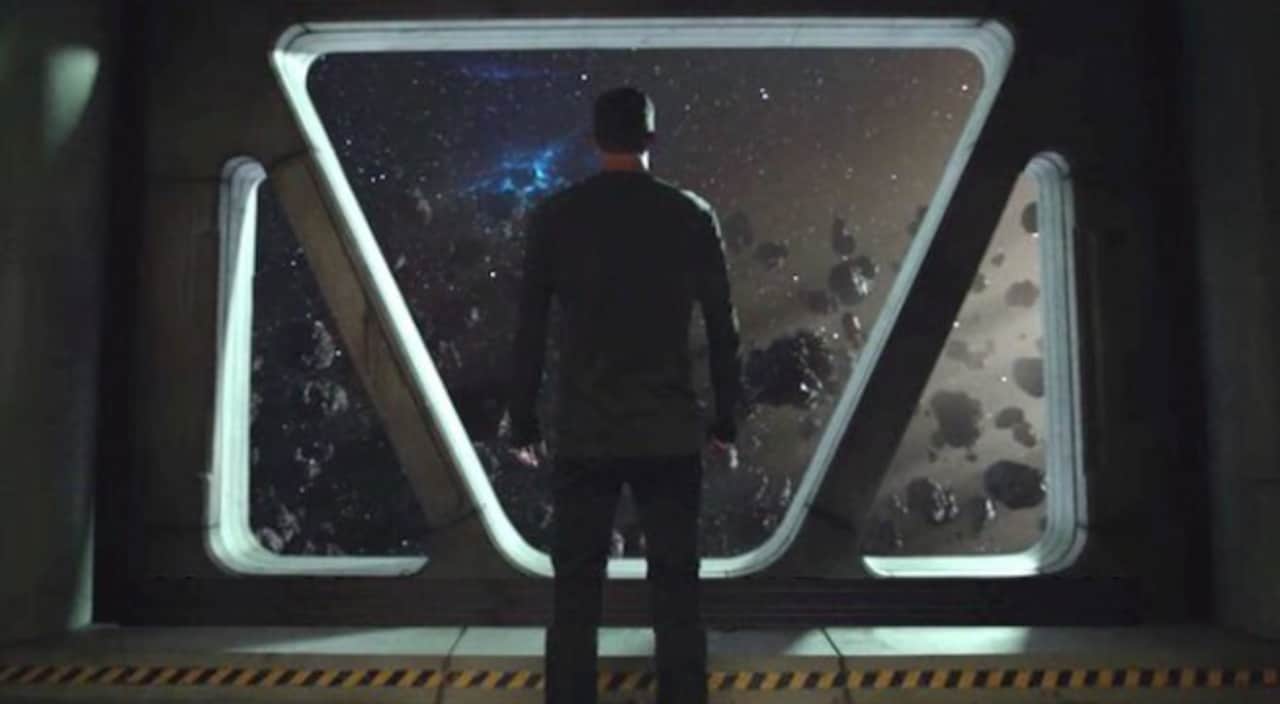 Last time, tired and battle worn, the Agents of S.H.I.E.L.D. were sitting down for a nice slice of pie (perhaps a’la mode) when they were rudely kidnapped and woke up on a spaceship 90 years in the future staring at an Earth cracked open like an egg. The captors were revealed to be the blue-skinned alien Kree whose leader, Kasius (Kuh-sigh-us), has taken Jemma Simmons as his personal servant. Kasius put a silvery mercurial thing in Jemma’s ear which allows Kasius to take away her hearing. Joined by the handsome scoundrel Deke and a feisty young woman named Tess, the Agents must figure out how are they going to get out of this one?! A cryptic note scribbled on a very old postcard from Agent Fitz (who was left behind on Earth) gives them hope but how in the heck is he going to reach them? 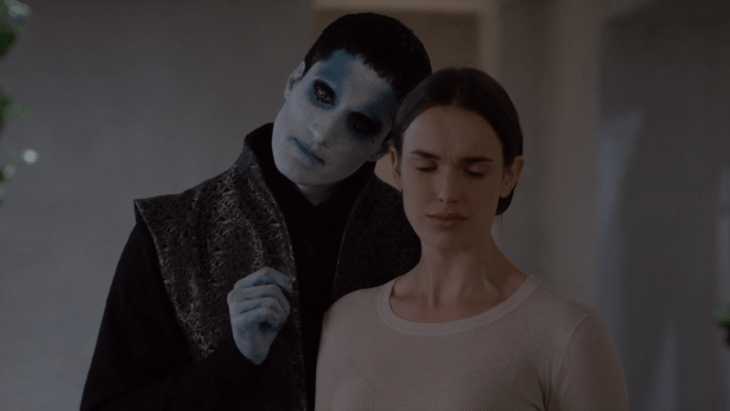 What You’ll Find Out:
(SPOILERS AHEAD!) A long zoom into the cracked remains of the Earth reveals a multi-level facility tucked into a rocky crevice inside the Earth’s interior. The S.H.I.E.L.D. guys aren’t on a spaceship after all but a mining station. Inside the station, taskmasters such as the tough and merciless Grill (Pruitt Taylor-Vince, “Identity”) oversee the daily operations of the handful of human survivors like Deke and Tess. They are descendants of the original survivors of Earth’s destruction (purportedly by Quake). This is the only life they have ever known. 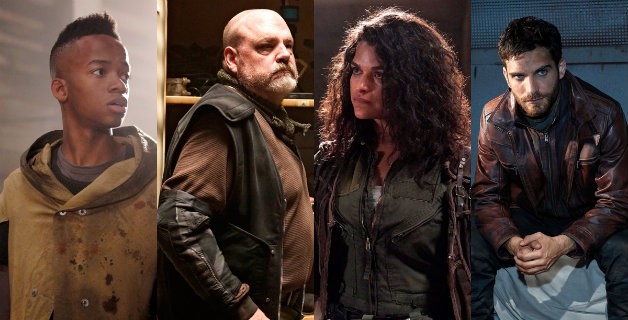 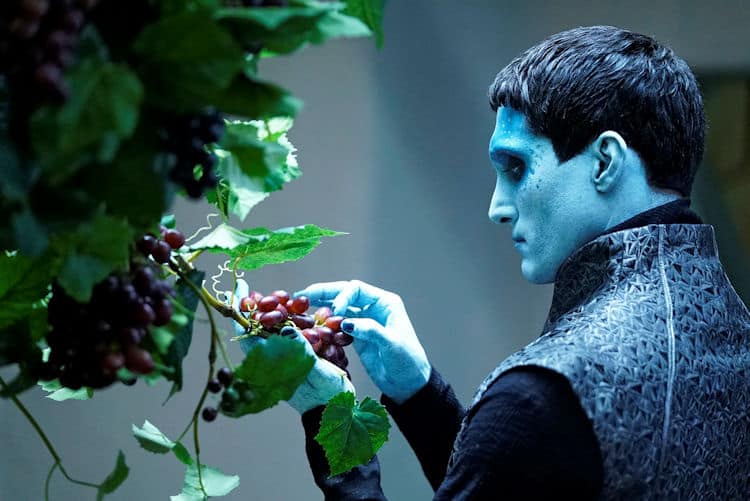 Kasius has prepared a reception for a visiting Ambassador who snubs his invitation to brunch on some Earth cuisine. Why the Kree would want to eat and drink martinis and finger foods is unknown and adds to the question: why is there no evidence of this being a Kree operation outside of the Blue Kree Group walking around in earthy threads? There’s only a small smattering of tech which isn’t so alien that May can’t hack into it and fly their ships. 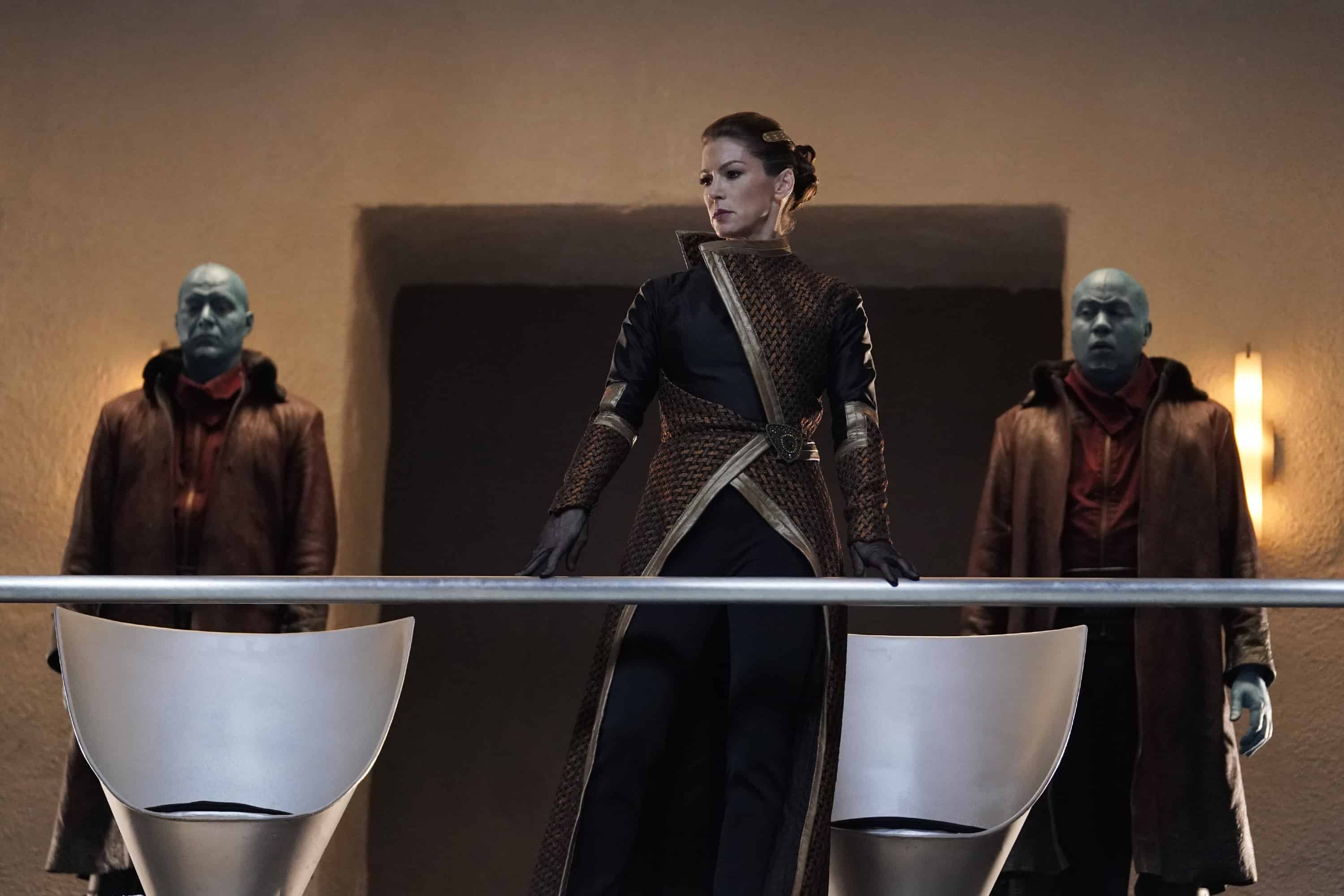 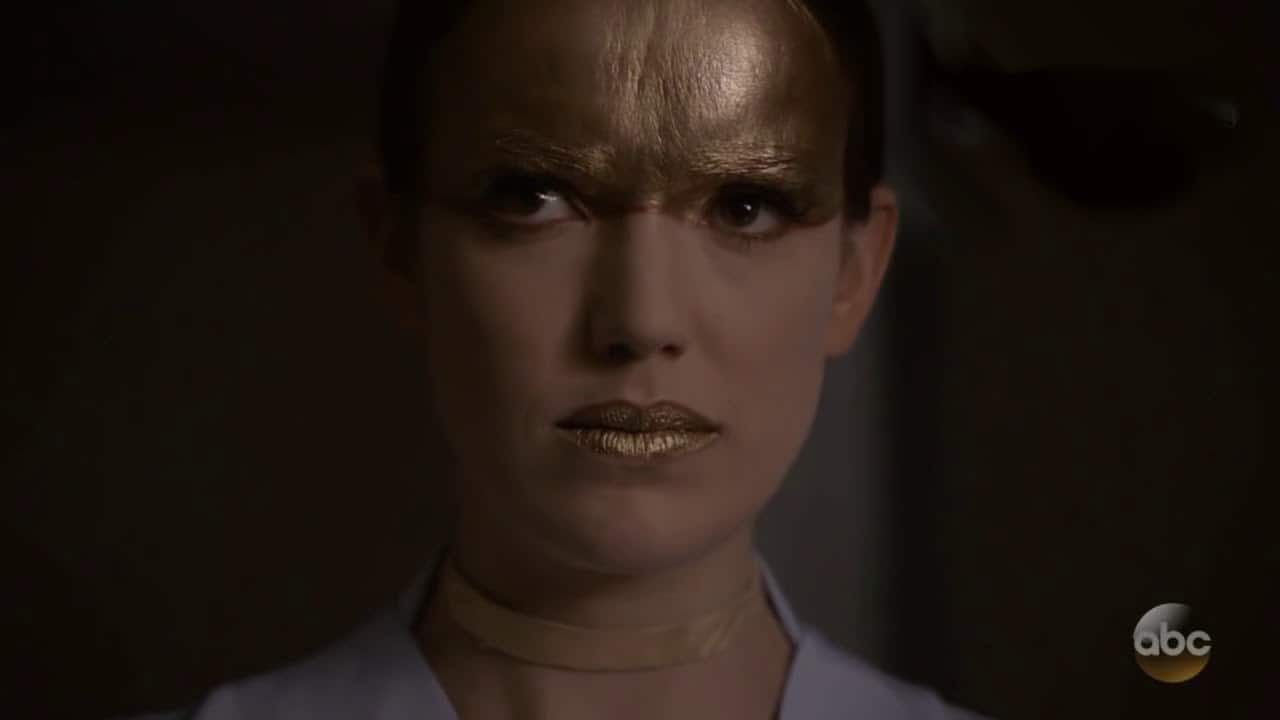 Kasius turns Jemma’s hearing back on and sends her to fix a problem before his ceremony for the visiting Ambassador. The problem is an Inhuman girl who has just come into her powers through Terrigenesis. No explanation is given on how Terrigenesis is still occurring. Originally, it was a very limited ceremony until S.H.I.E.L.D.’s meddling unleashed it all over the Earth. The only plausible reason is the Kree are performing it on the humans themselves for some reason. The girl, Abby, is learning to control her molecular density, a power much like that of the android Avenger, Vision. She can solidify her body hard as lead or become intangible and phase through solid matter. She says all 18-year-olds go through Terrigenesis though we haven’t seen another Inhuman in the installation so far in the story. 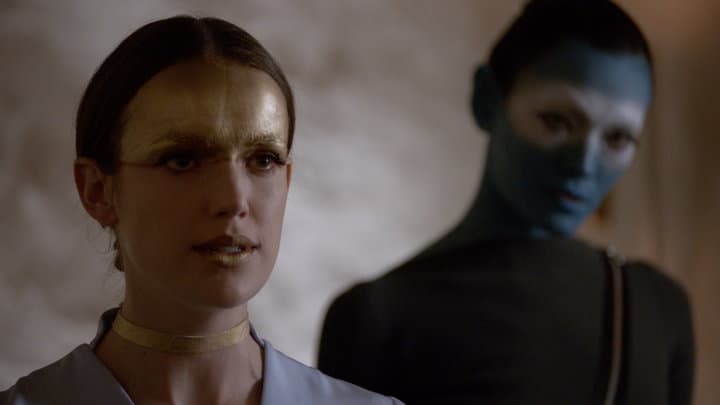 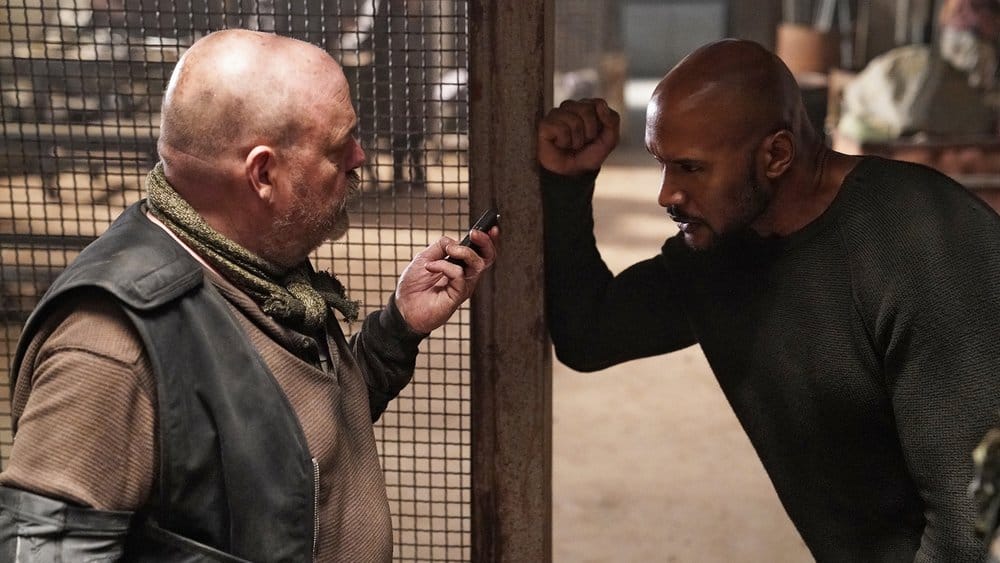 Elsewhere, Mack gets on Taskmaster Grill’s bad side and is shown who’s boss. Deke brings up Sky-Daisy quaking the Earth apart and gets slapped in the face. 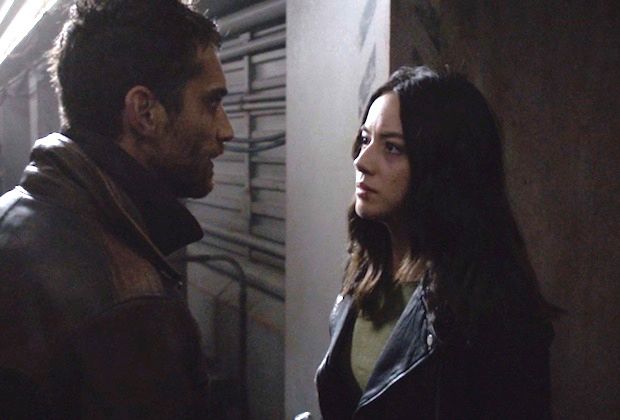 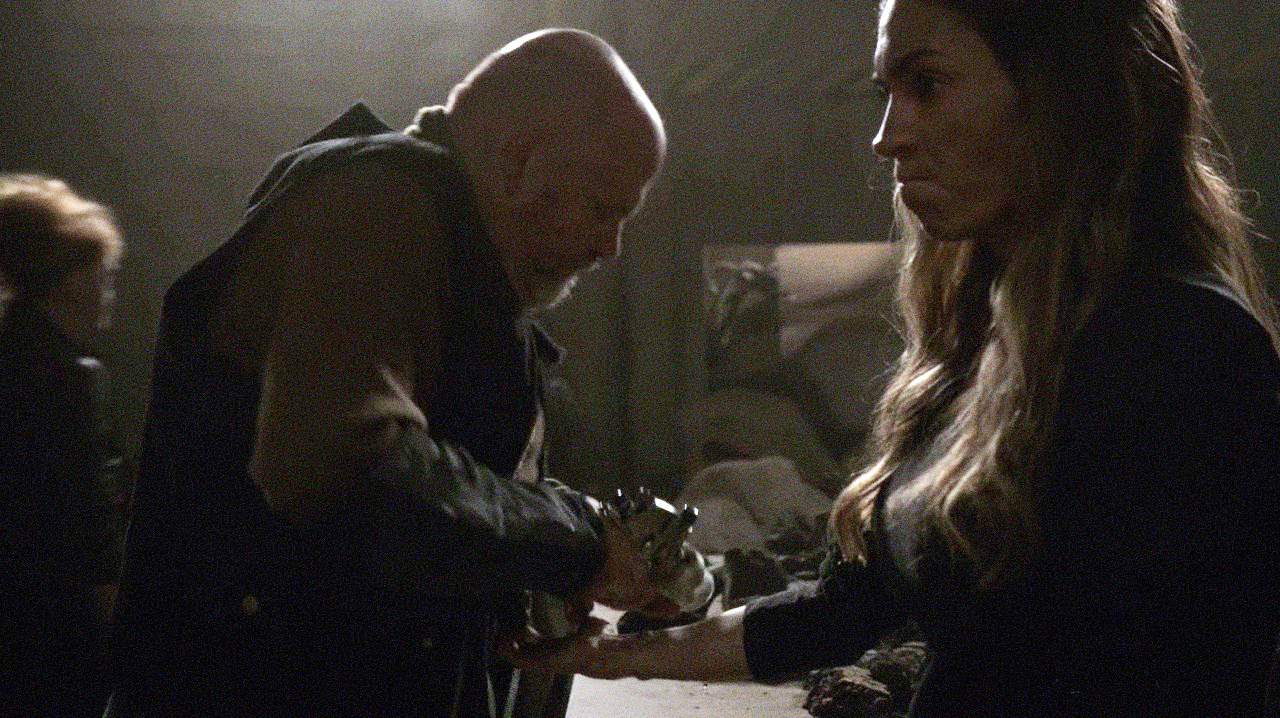 Yo-Yo does some of her fancy footwork to retrieve a scroll she stole from a Kree guard last week. Mack makes another “Alien” joke.

Tess is going out on a trawler haul and May, Coulson, and Mack hitch a ride along with a human troublemaker, Zev. Aboard the trawler, May tells Coulson when everything is over she is hanging it up. Her time in the Framework thinking she was a Hydra Agent has taken a toll. 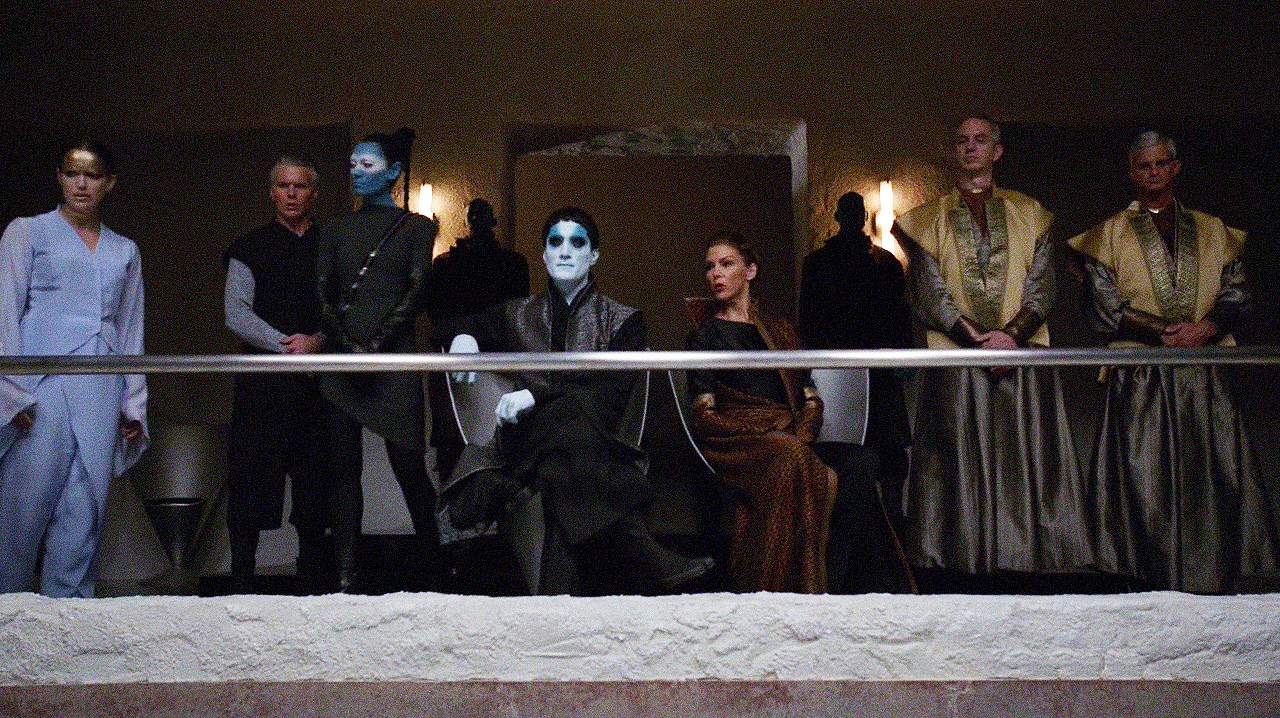 Kasius greets the Ambassador, Lady Basha, who appears to be a human woman.They go to attend the “ceremony” which turns out to be your run of the mill generic gladiator fight. Can’t aliens just play a nice game of chess or listen to a recital? It always has to be a duel to the death gladiator match. Abby must battle a pumped up human muscle machine whose outfit has him looking a little like Batman’s Bane. Poor, frightened Abby is getting her ass kicked until she pulls one of Vision’s tricks and phases her hand into her opponent’s chest then solidifies, killing him instantly. And for all her hard work, Abby is then sold off to Lady Basha.

Coulson asks Tess about some numbers in a book, specifically one that repeats over and an over…the number “616”. Tess says it’s a chunk of rock but it’s bouncing off signals from Earth which is uninhabitable. 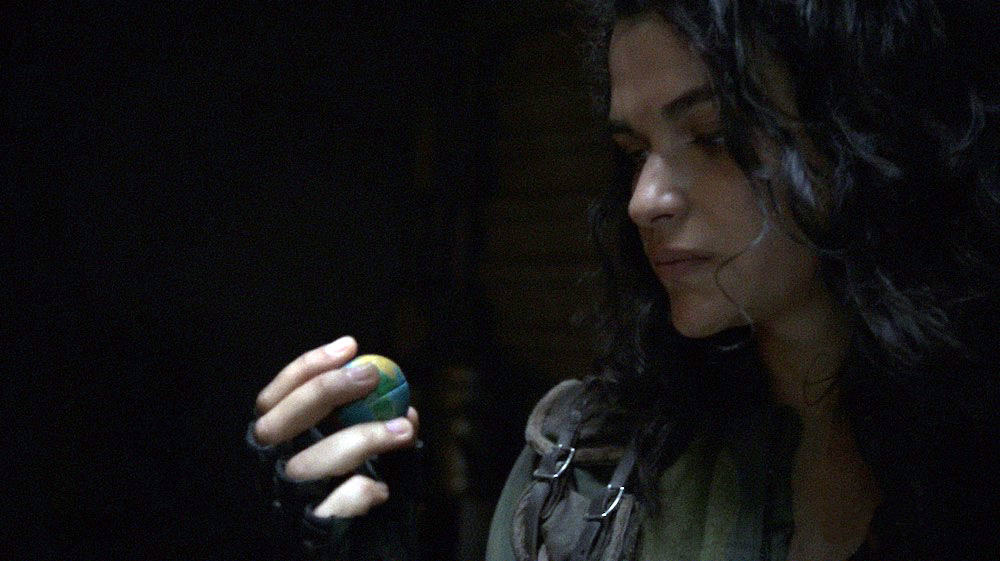 The Agents get together with Tess to try and clear up the signal they picked up. They discover that the people in the transmission are talking about them! Tess says nothing can survive on the surface, that’s where humans are sent to die. Cut to: Zev, on the surface, preparing to run as he hears the Vrelinexians screech.

What This Means For The Future:
Still no Fitz this week. And no pie. Next week: “A Life Earned”. And maybe a new Alien joke from Mack!

Rating: 7/10
Final Thought: I am really trying hard to be into the show, suspend disbelief and all but they make it so hard. How does May effortlessly fly an alien spaceship and not even pay attention? Why does every alien race these days have to stage gladiator games with humans for entertainment? Get these people back to Earth and let’s see them go up against the Zodiac Cartel or something.