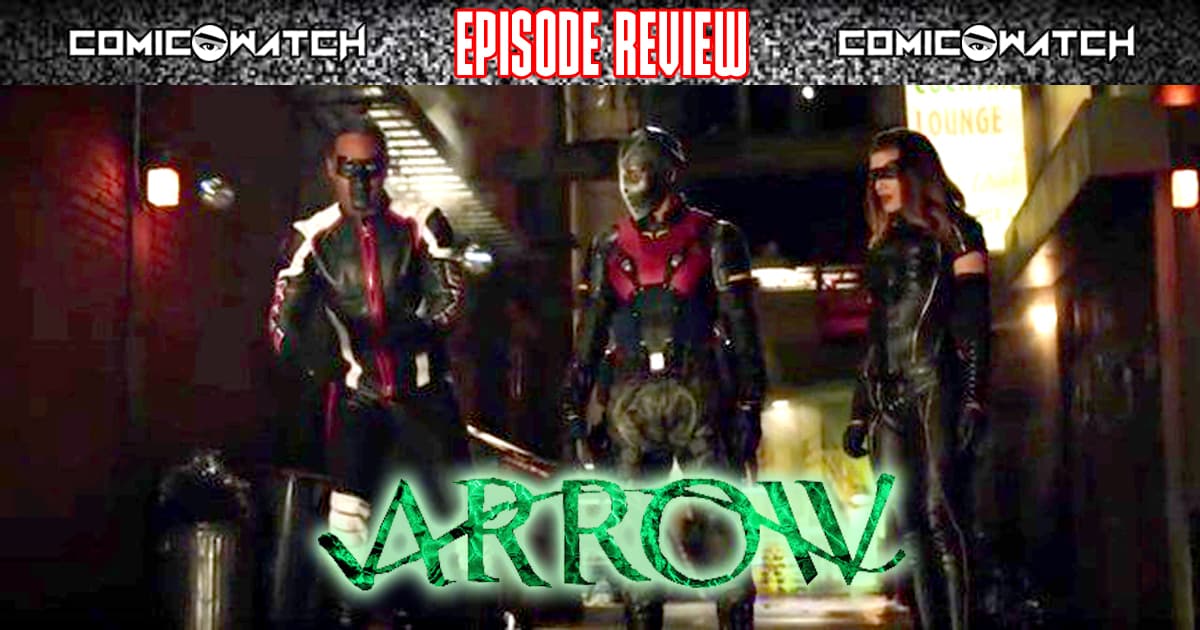 Cayden James has been defeated, but in his place a new threat rises—Dominik Diaz. Can the fractured Arrow Family teams put aside old differences and come together to face this new threat? Will Star City collapse from a government shutdown? Can Quentin save Laurel Lance from a life of villainy?

What You Should Know:
Cayden James has been defeated, only to reveal a potentially bigger villain pulling the strings. Dominik, one of James’ three lieutenants, was shown last week as a much larger player than we had seen up to this point, just before he killed James inside the interrogation room at SCPD and walked away without a second glance. With the city on the brink of economic collapse thanks to the $70 million extorted by James, Oliver and the gang must now try to put the city back together by reclaiming the money, as well as try to put their fractured team back together, as Curtis, Dinah, and Rene continues to operate as a new team. Finally, the last episode we saw Quentin Lance kidnap Black Siren (an evil Earth 2 version of his daughter, Laurel. Yeah. You read that right. Welcome to the Arrow-verse!) in the hopes of rehabilitating her from her life of crime. I’m sure nothing will go wrong there.

This entire episode has the feel of a bridge episode, setting up future stories and complications stemming from the fracturing of the team, the fall of James, and the rise of Dominik. There is a lot going on in the episode, so for sake of clarity and brevity, let’s break it down into the three major threads, shall we?

“Where is the money?”

Mayor Queen assures a boardroom full of angry city officials that, no, the city will be fine because he’ll have all the money back in 48 hours. He promises (note, first promise or threat that he makes that he can’t keep. It’s a bit of a trend in this episode). Naturally, the accountant finally arrives to tell Ollie that the money is missing from the Corto Maltese bank account, having been recently withdrawn, and Corto Maltese is not exactly known for playing well with others or transparency, so finding out who withdrew the money will not be an easy task.

Unless you have a Felicity, that is. In true Felicity fashion, she asks for an hour and delivers not only the bank records and video of the thief, but also makes it look like the evidence came through official channels. It turns out to be Black Siren (using an old comics alias of Black Canary’s from her Gotham City days, Siu Jerk Jai), which mobilizes both teams to move out quickly and try and find Black Siren before the other team can.

“Can’t we all just get along?”

The race for Black Siren is on. Team Arrow (Ollie, Felicity, and Diggle) know that, if they want to find Black Siren alive, they must get to her before The Outsiders (Curtis, Rene, and Dinah).

***Sidenote: Curtis only suggested The Outsiders as a team name in passing one time a few episodes back, but since it’s a real team in the comics and is an appropriate moniker for their situation, I’ll be using it as shorthand until something more permanent comes along***

After viewing the security footage, Dinah and Ollie have a heart-to-heart regarding Laurel. In case you forgot, Laurel killed Dinah’s partner/lover/fellow vigilante, Vigilante, a few episodes back, and Dinah is out for blood. And yet, while this dilemma is usually Ollie’s modus operandi (“I know I don’t have the most credibility when it comes to telling people not to commit murder,” he says), Ollie instead makes a veiled threat to Dinah, assuring her that he will never let her cross that line (note, another promise that Ollie is really in no position to enforce. I mean, he’s good, but Dinah is a meta with quite a bit of training. Stop writing checks you can’t cash, Mr. Queen!).

As both teams commence their searches of the last known whereabouts of Laurel (where she was shot by Dinah and then dragged off to a cabin in the woods by Quentin in last week’s episode), two important things happen. First, Curtis shares more misgivings about Dinah’s personal vendetta, opening space for a second team schism. Second, Ollie, finding Dinah’s footprint at the scene and assuming that means the Outsiders have Laurel in their custody, points directly at the source of all the in-fighting between the two teams: trust, or rather, lack thereof. If the teams were sharing information, they’d probably already have Laurel and the money, but neither team trusts the other, and intra-team trust problems are spreading as well, with Quentin lying to Team Arrow and The Outsiders slowly splintering over Dinah’s quest for vengeance.

That lack of trust leads directly to the most heated confrontation between Team Arrow and The Outsiders to date, as Team Arrow bursts into The Outsiders’ bunker, hacking their equipment and throwing accusations around. Things are said on both sides that can’t be taken back, and the past is drudged up as if all of the characters were running for office. It’s an ugly scene for all involved.

Thanks to a bug planted on Ollie by Rene, when Team Arrow was alerted to Laurel’s whereabouts by Thea (see below for more on Laurel’s time with Quentin), both teams race to the scene for a final heated confrontation. With emotions boiling from the previous encounter, the ugly scene from before can do nothing but produce an even uglier confrontation. Team Arrow violently assaults The Outsiders while Quentin and Laurel attempt to escape, and nobody walks away from this fight unscathed. Dinah finally catches up to Laurel after beating an unarmed Quentin unconscious, but when faced with the opportunity to quench her bloodlust, is talked down by Curtis, allowing Laurel to fire off a sonic cry and escape. As the two teams face off to debate trust and justice, Rene finally catches up only to collapse. The fight is diffused because Rene needs immediate medical attention.

In fact, the need for medical attention is so acute that it appears Rene will be sidelined for a while. When Diggle and Felicity visit the hospital to check on his status, Curtis, in no uncertain terms, informs that they are not welcome and will never be welcome again. The money was never recovered and Laurel is once again in the wind. To make matters worse than they already are, we also find out that DA Armand is also on Dominik Diaz’s payroll, along with the Chief of Police. Oliver has failed this city, but will Diaz be the one to collect on his debts?

“What is the fate of Laurel Lance?”

Quentin has whisked Laurel off to a remote cabin in the woods for a little Dolores Claiborne sequence. Quentin has ultimate faith that given time and affection (and some hot and sour soup), he can draw his daughter to the surface of Black Siren’s personality, once again highlighting the notion of trust in this episode. In a series of sputters and stops, there are moments where it seems like maybe, just maybe, Quentin is getting through to her, and once Team Arrow is brought in, the decision is made to exchange the stolen money for getting Laurel and Quentin out of the country to try and start a new life together, away from Dinah. Unfortunately, Laurel escapes without ever telling anybody where the money is, and both teams lose her trail. The episode’s final scene shows a bloody and battered Laurel approaching a delivery truck driver, talking about a two-year long kidnapping and giving her name. Lies? Amnesia? Another Laurel from somewhere in the multiverse? Time will tell what is happening here.

A right bloody mess, that’s what. Everybody hates everybody else, and with each confrontation, the chance of reconciliation between the two teams gets smaller and smaller. This episode is all about trust, be it Oliver’s base position of distrusting everybody or Quentin’s optimistic trust that there is good in Laurel, and by the end, every character has broken the trust of another. There are no winners today, folks, as everybody deals with some form of bitter defeat.

As I previously stated, this entire episode feels like it is set up for things to come. The looming and ever-growing threat of Diaz may end up serving as the salve that brings Team Arrow and The Outsiders back together, but I can’t foresee a way that a reconciliation could be total and not have a cheesy feel to it. I hope I’m wrong about that. The question of Laurel is tougher to speculate on at the moment, given the brief amount of time we spent with her at the end of the episode. There is a bit of a feeling this season that the writing team regrets disposing of the Earth 1 Laurel and are desperate to find a way to bring her back into the fold as a hero. That sort of desperation has a way of resolving itself poorly, so once again, I hope I am wrong.

As we begin on the back-half of this sixth season of Arrow, I can’t help but feel like there are either great things on the horizon (although the journey to that horizon is beginning to get tedious), or we are once again descending into a lull for the Arrow-verse’s flagship show. Season 5 managed to draw the show out of what looked like a death spiral with the brilliant Prometheus arc, but now, it feels as if that injection has run its course as the series becomes more and more listless.

Rating: 5/10
Final Thought: There is just no reason for the series to struggle like this. The cast is excellent, the characters engaging, and the potential is unlimited. I maintain the hope of a return to greatness soon, but if the writers aren’t careful, they may see a drastic loss in audience soon. The final nine episodes will spell the fate of Arrow. Here’s to hoping they are good.