DC Showcase Animated Shorts: A Blast from the Past, Daddy-O

The DC Showcase category of animated film and shorts gives the audience a chance to see some lesser known comic characters shine in their own story.  Recently released on DVD and Blue-Ray (with Constantine: The House of Mystery reviewed here https://comic-watch.com/movies/constantine-the-house-of-mystery-bloody-hell), three such lesser-known comic titles whose source material is more than fifty years old are given the spotlight treatment and showcased in their own story.  Blue Beetle, Kamandi: The Last Boy on Earth, and The Losers. Each done in a different style. 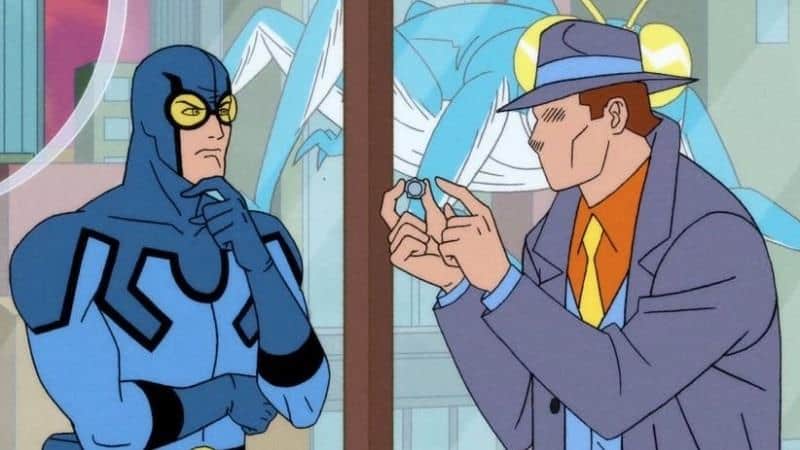 Blue Beettle (Ted Kord): While foiling a diamond heist in progress, the Blue Beetle (Matt Lanter) meets up with the Question (David Kaye), Captain Atom (Jeff Bennett) and Nightshade (Ashly Burch) and together they attempt to stop Dr. Spectro (Tom Kenny) from taking over the world by using fear and depression to enslave the population.

The artwork and direction are reminiscent of the 1960s era cartoons like the Superfriends animated series of my youth. The story was humorous and lighthearted and aimed more at children with characters being a bit campier.  This short celebrates the characters of the Charlton Comics silver era by using heroes all original to that publishing company before DC acquired most of their characters in 1983. 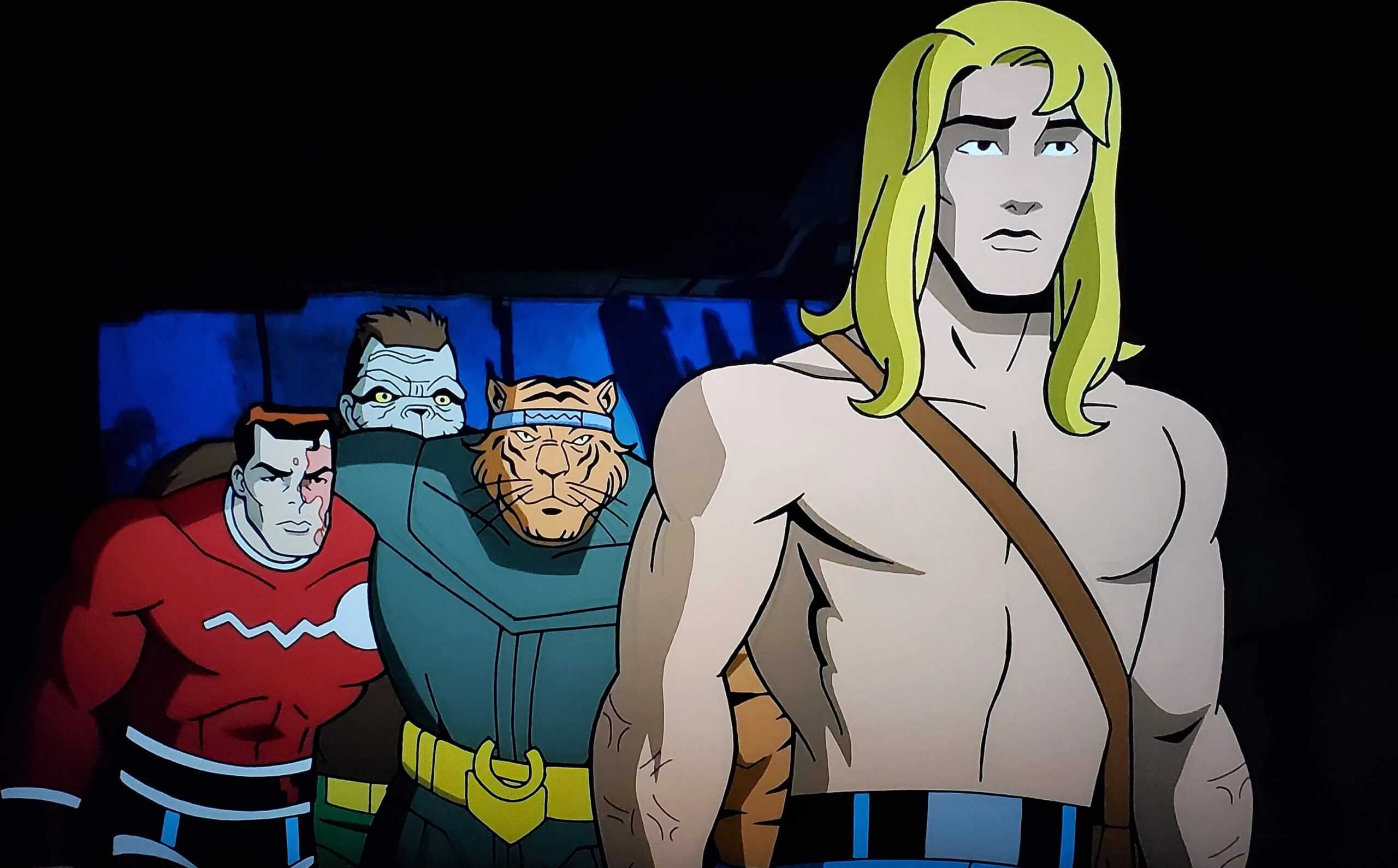 Kamandi – The Last Boy on Earth: In a future where some cataclysmic event has destroyed the earth and what is left seems to be ruled by mutant human-animal hybrids, Kamandi (Cameron Monaghan) rescues his friend, Prince Tuftan (Steve Blum) of the Tiger Kingdom who had been incarcerated by the Rat people, but are recaptured by a gorilla cult.  Joined by Ben Boxer (Armen Taylor) a humanoid mutant, the captors are put through a series of tests to find the reincarnation of their god who they call The Mighty One.

The tone of this short was definitely a bit more serious, and the animation reminded me more of the cartoons of the 1970s and early 80s.  Kamandi was created by Jack Kirby, when DC failed to get the rights to the Planet of the Apes in the late 1960s. DC asked Kirby to create something with a similar plot and tone and you can definitely see some of the elements in the story. 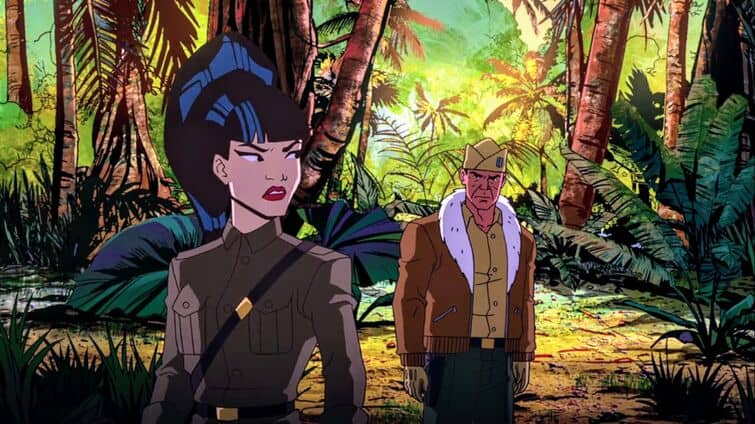 The Losers: During World War II, after being shipwrecked on an uncharted island, a team of rag tag outcasts must fight dinosaurs while attempting to destroy what could be the most powerful weapon on Earth.  The team is led by Johnny Cloud (Martin Sensmeier) and consists of Captain Storm (Dean Winters) ‘Mile a Minute’ Jones (Eugene Byrd), Gunner and Sarge (both voiced by Dave B. Mitchell).  Also on the mission is Chinese agent Fan Long (Ming-Na Wen).

This is the most serious of the short films and the most adult with the use of some strong language, blood and violence.  The artwork matches the tone and was closer in style to the more modern DC animated movies.  The story hints at themes of betrayal, death, and sacrifice in doing what is right, but is only able to touch on these with such a short running time. 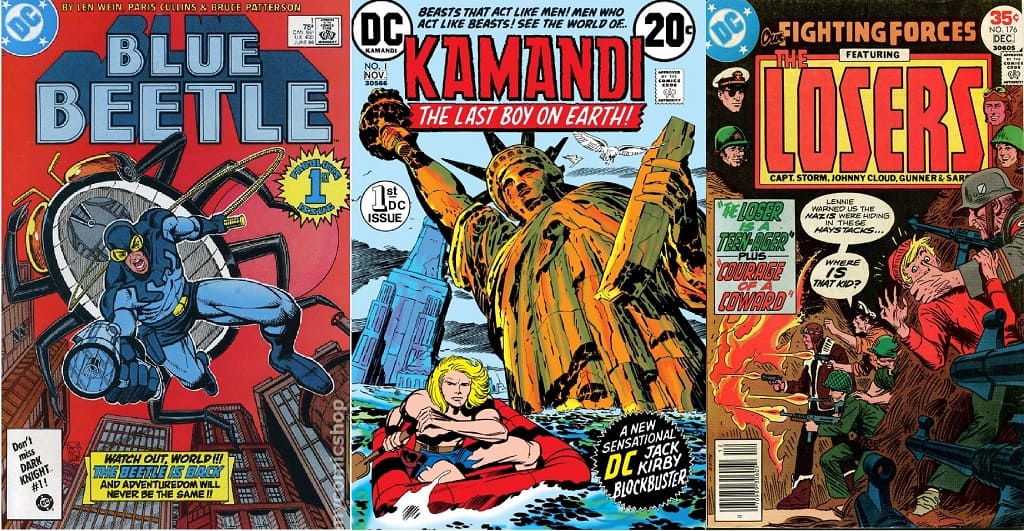 These three stories had their own unique style and merits and each accomplished exactly what was intended.  They all were written very well and had great voice talents. It would be unfair to judge the animation by todays standard as two of the films were purposely imitating a technique of an earlier era, which had simpler and less dynamic styles. Overall these were very well done, but I am not sure all audiences will appreciate them.

DC Showcase Animated Shorts: A Blast from the Past, Daddy-O