Previously on Titans episode 4: "Doom Patrol", we learned that two years prior, Gar was left to die in a tent by humanitarian workers in Africa when a man in a hazmat suit (presumably "The Chief"...more on him later) enters and injects a green liquid into him, causing him to scream and turn green. This appears to be how Gar got his ability to turn into a were-tiger. Back in the present, Gar comes across Rachael (aka Raven) who is on the run after blowing up a church. Gar takes her back to his home where she meets a motley band of misfits...a clunky "Robot Man" who looks like he stepped out of a 1950's movie, Larry, a bandaged guy who looks like the Invisible Man, Rita who can turn into a giant blob, and their caretaker, The Chief. When the Chief tries to restrain Rachael in order to help her, she lashes out, breaking his spine. After the Titans show up and retrieve Rachael, Gar is told to go with them.

(Note: The Chief is now played by Timothy Dalton).

Doom Patrol opens with a devilishly diabolical Alan Tudyk narrating the show as Mr. Morden AKA Mr. Nobody.
The pilot is an origin story for Cliff Steele/Robotman (Brendan Frasier voice) a former race car driver, who, after a catastrophic accident, Dr. Niles Caulder (Chief) transplants what's left of him (his brain) into a clunky robotic body. There are snippets of the origins of Larry Trainor (AKA Negative Man voiced by Matt Bomer) who is a closeted air force pilot in 1961 and Rita Farr (AKA Elasti-Woman played by April Bowlby) a 1950's actress who gets infected with a strange toxin while filming. Mostly the characters are referred to by name so you don't hear Negative Man or Elasti-Girl said in the pilot. The final member of the group is Crazy Jane, a woman who has 64 personalities with a different power for each one.

Against the Chief's explicit instructions, the group heads into town when the Chief sets off to Paraguay for a few days. Naturally, chaos follows the misfits and they wind up trying to get control of Rita after she transforms into a giant blob and terrorizes the town.

Doom Patrol is a breath of freshness in the ever-growing superhero television market. Taking characters that debuted in My Greatest Adventure #80 in 1963 and that never truly saw the kind of success other DC heroes have, Doom Patrol looks to be one wild and weird series. And we can definitely use some more weird and quirky TV. Hopefully, the show can keep a lighter tone than Titans which was just so dark and uneven. I suspect we will see future episodes devoted to the individual members like the pilot’s focus on Robotman and as what was done on Titans. Somewhere along the way Cyborg is set to show up but for how long or if he joins the team I don’t know. The series is expected to run through May and be around 15 episodes. 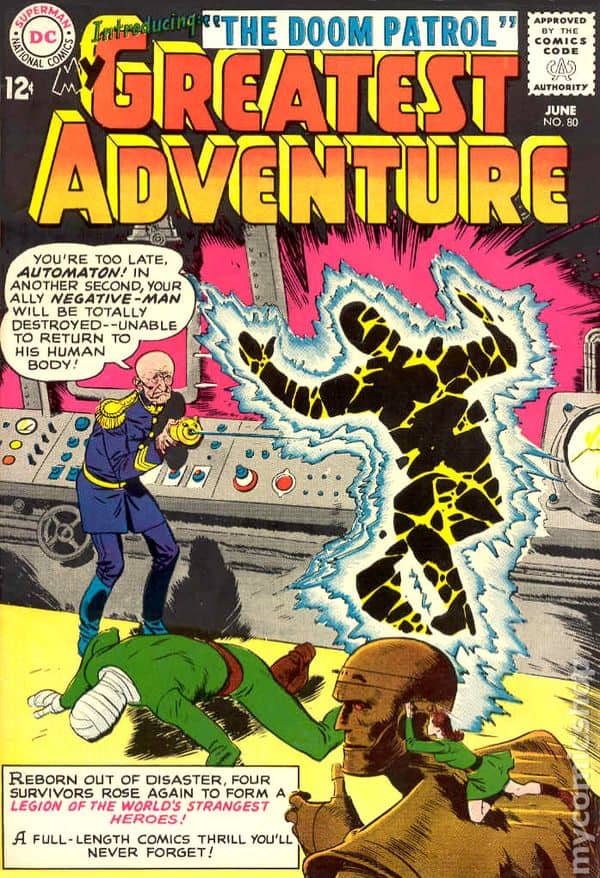 Wonderfully weird, definitely looking forward to the how this series turns out!