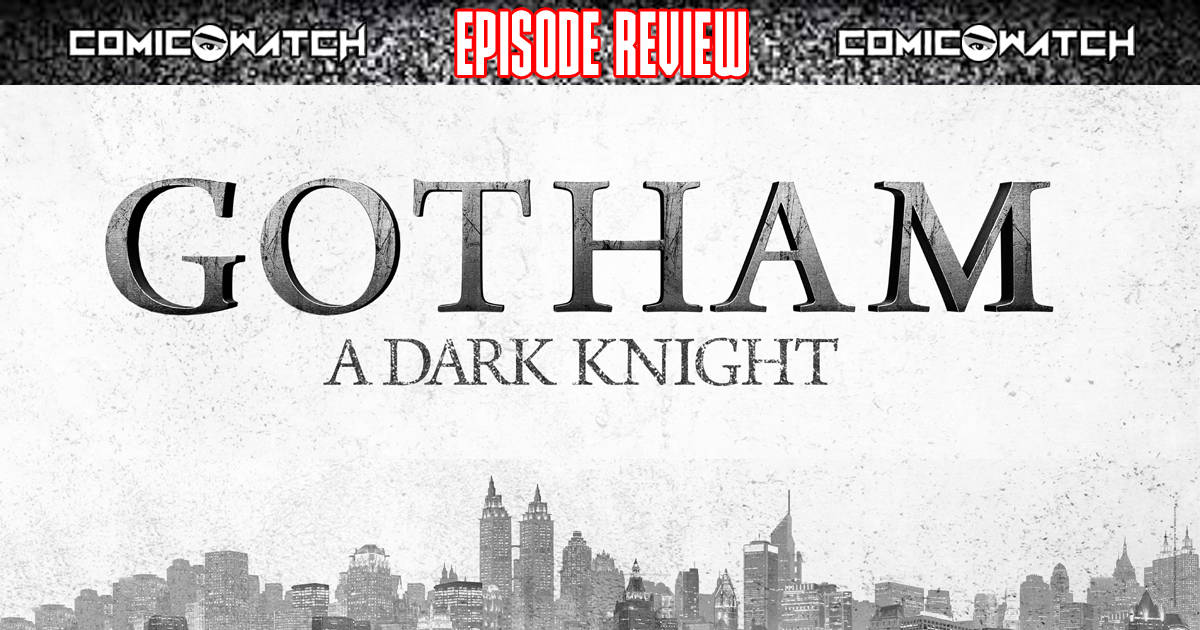 As Lee Thompkins attempts to rally the citizens of the Narrows into one cohesive community and Edward Nygma struggles with his darker self, Jim Gordon attempts to reconnect with Harvey Bullock, while trying to catch the assassin hired to kill Lee. Meanwhile, Alfred tries to clear his name of a crime he didn’t commit, and Ivy is reborn once again.

Right before the winter finale, the show left us with multiple cliffhangers. Edward Nygma started seeing his deranged Riddler persona in the mirror again, much as he used to back in the beginning of the series. Bruce Wayne fired Alfred Pennyworth and seems to have given up wanting to be a vigilante who protects Gotham City, preferring to party, instead. Ivy Pepper raided a Chinese herbalist’s shop and ingested a great many potions, which started to transform her once again. Solomon Grundy started getting memories of his pre-resurrection life back, including the memory of who killed him in the first place. Harvey Bullock had quit the GCPD, and James Gordon was made Captain. Barbara Kean, Tabitha Galavan, and Selina Kyle had gotten control of their nightclub back. Last, but definitely not the least, Dr. Leslie Thompkins had just been made the new leader of the Narrows and the people living within it.

What You Will Find Out:
The episode starts out with a large chunk of the episode’s major players within the same city block. Jim Gordon is seeking out Harvey Bullock in a very colorful bordello, but unable to find Bullock there (though he gets confirmation on Harvey having frequented the place) continues his search. Across the street, Ivy Pepper is still in a transformative cocoon inside the herbalist’s shop but is woken up by a bunch of teenagers in search of drugs. Lee Thompkins is attempting to rally the people of the Narrows together in a different part of the same building, and though she’s winning some of them over, someone seems intent on taking her out with a dangerous toy plane. Nearby, Alfred Pennyworth is having lunch at a diner, sticking out like a sore thumb, and some of the regular patrons don’t seem to be very welcoming of his presence.

Alfred’s main storyline this week deals with his life away from Wayne Manor, and away from Bruce Wayne, who he’s spent the last so many years raising and caring for. He’s a little adrift, finding himself in a diner in the bad part of town, sticking out like a sore thumb. He’s clearly from a different world than the people who frequent the bar, and they want him to know it. Though they at first try to rough him up and mug him – an impossible task, given what we know about Alfred’s fighting prowess – he eventually wins them over when he, along with Jim Gordon, selflessly charges into a burning building to help save innocent lives. (More on the burning building later.) He even makes friends with a pretty waitress named Tiffany, who is the first person to show him any kindness or warmth since Bruce fired him. Clearly, this is something that Alfred is drawn to – along with the fact that she’s got some bruises that hint at abuse. As ever, he’s ready to play the shining knight, and when he walks her home later, he confronts her fake nice guy boyfriend by roughing him up and losing his ring. Not that this goes in his favor. He’s later framed for Tiffany’s mother. Alfred professes his innocence, but the evidence isn’t on his side, given that the boyfriend wore Alfred’s ring and used it to mark Tiffany’s body when he killed her. Luckily for Alfred, he’s eventually able to prove his innocence while inadvertently finding Harvey Bullock, who is working as a bartender once again. Though this reunites Gordon and Bullock, it’s only briefly. Gordon misses Bullock and wants him to come back to the GCPD, but Bullock may be happy simply tending bar.

Lee, finding herself the new leader of the Narrows, and now having earned the nickname “the Doc,” finds herself fighting to bring the people of the Narrows together into one cohesive unit. The only problem is, someone seems to be out to get her. Just as she’s winning over people to her vision of what the Narrows should be like, she’s attacked by a toy plane. Though saved by Solomon Grundy, the plane still causes a fire in the building, causing everyone to flee. Though becoming the new leader of the Narrows was easy enough, staying the new leader and creating change is clearly going to be a difficult challenge – though one that she’s up for. This new iteration of Lee seems to be something of a bigger badass, ready to claim her ground and make things happen instead of trying to run away from Gotham City. Eventually, it’s discovered that a local toymaker-slash-assassin named Griffin Krank is trying to kill her, though she isn’t clear on why yet. Nor is Gordon, who was led to her by a drama-stirring Barbara Kean. The only people who know why the toy maker was trying to off Lee are Krank himself and, well, the Riddler. Sure, Edward Nygma might be in love with the Doc, but his darker half had been taking over when Nygma was unaware and had ordered a hit on his lady love. That’s sure to play out well.

Meanwhile, under everyone’s noses, Ivy Pepper has been reborn. This latest makeover has turned her into a bonafide botanical beauty, and she’s quick to discover that the potions she ingested before slipping into a cocoon have given her deadly new powers. Her touch is now poison, and when she scratches someone, their insides become an instant poison ivy farm. She reconnects with Selina, after leaving a few bodies in her wake, and immediately poisons her too, to show her how powerful she is now. She gives Selina an antidote and offers to be there for Selina just the way that Selina had been there for her for so many years.

Before reconnecting with Ivy, though, Selina reconnected with Bruce at the Sirens Club, and it wasn’t a happy reunion. Bruce, no longer intent on being Gotham’s savior, is instead hanging with a rowdy group, drinking, and being an overall smarmy jerk with a woman on either arm. Though Selina calls Bruce out on his crap, he’s not really ready to hear any of it and brushes her off. Though he’s obviously going to sober up at some juncture, it’s not going to be tonight.

In the smallest of the episode’s arcs, Solomon Grundy is starting to remember his past – the fact that he was a criminal going by the name Butch Gilzean, and that it was Barbara Kean who killed him. He approaches Tabitha Galavan and tells her that he remembers, but when he makes a romantic overture towards her, she steps away. Sure, she cares about him, but it’s heavily implied that she isn’t in love with him the way that he was with her, and boy does that hurt him.

What Just Happened?:
For the longest time, Gotham was a show that struggled to find itself. Was it a prequel police procedural set in one of the world’s most famous fictional cities? Was it a soapy, somewhat over the top drama? Or was it something else? Tonally, the show shifted, but it never managed to feel very cohesive. Not until tonight’s episode, at least, when the show seemed to finally emerge into a cohesive, confident thing. One of the smartest decisions was to have all of the beginning action happen on one city block – it made the setting feel more like one singular city, and all of the characters more interconnected than they ever have before.

There were some great developments in tonight’s episode, too. While some trodden familiar ground – Nygma struggling with his darker half, Grundy pining for Tabitha, Bruce being a smarmy jerk – others took familiar ground and twisted it into a new direction. One of the series’ biggest missteps so far had been its treatment of the Poison Ivy character, who in this episode emerged as something far closer to her comic counterpart, though there were certainly shades of her character from Batman & Robin present. Presented in a far less campy light, though, she feels delightfully dangerous, and it’ll be fun to see where she goes from here, as she’s clearly being set up to be a thorn in the side for Selina and the Sirens.

It’s also nice to see Lee Thompkins move into some stronger, meatier territory that doesn’t have her trying to escape Gotham City, and has her doing more than merely being the damsel in distress for Gordon to either save or push away. Giving her some agency was a good step, and it’ll be worth seeing if she can ultimately take the power given to her and mold it in such a way so as to do some good with it. Much like Ivy and the Sirens, it’s clear that Lee is being set up to eventually be a foil for Sofia Falcone.

It seems to be the male relationships in this show that seem to be suffering from the most pain, though. Gordon dearly misses Bullock just as Alfred dearly misses Bruce, and while it seems as though a reconciliation could be on the horizon for Bullock and Gordon, it’s going to take a while longer for the other two, though I think we all know that their status quo will be reinstated once we get to the final three or four episodes of the season.

Final Thoughts: This truly is a welcome return for Gotham, and it’s exciting to see that the show seems to have found a confidence in itself that it previously lacked. The first half of this season was certainly a lot of fun, but the second half seems to be heading in an even more satisfying direction.

Gotham airs on Fox on Thursday nights. Check your local listings for times.

An avid superhero fan ever since I first watched Batman '66 and Wonder Woman as a kid, I grew up taking in as much superhero media I could, developing a special love for characters like Black Canary, Flamebird, Supergirl, the Wasp, Mockingbird, and Emma Frost, to name a few. I've been reading comics since I was nine, and when I'm not reading them, or watching television shows or movies based off of them, I'm usually found discussing them on my Twitter account, @LicenceToMock.