Hawkeye 106: A Great Finale With A Couple Weird Flexes (But Sure) 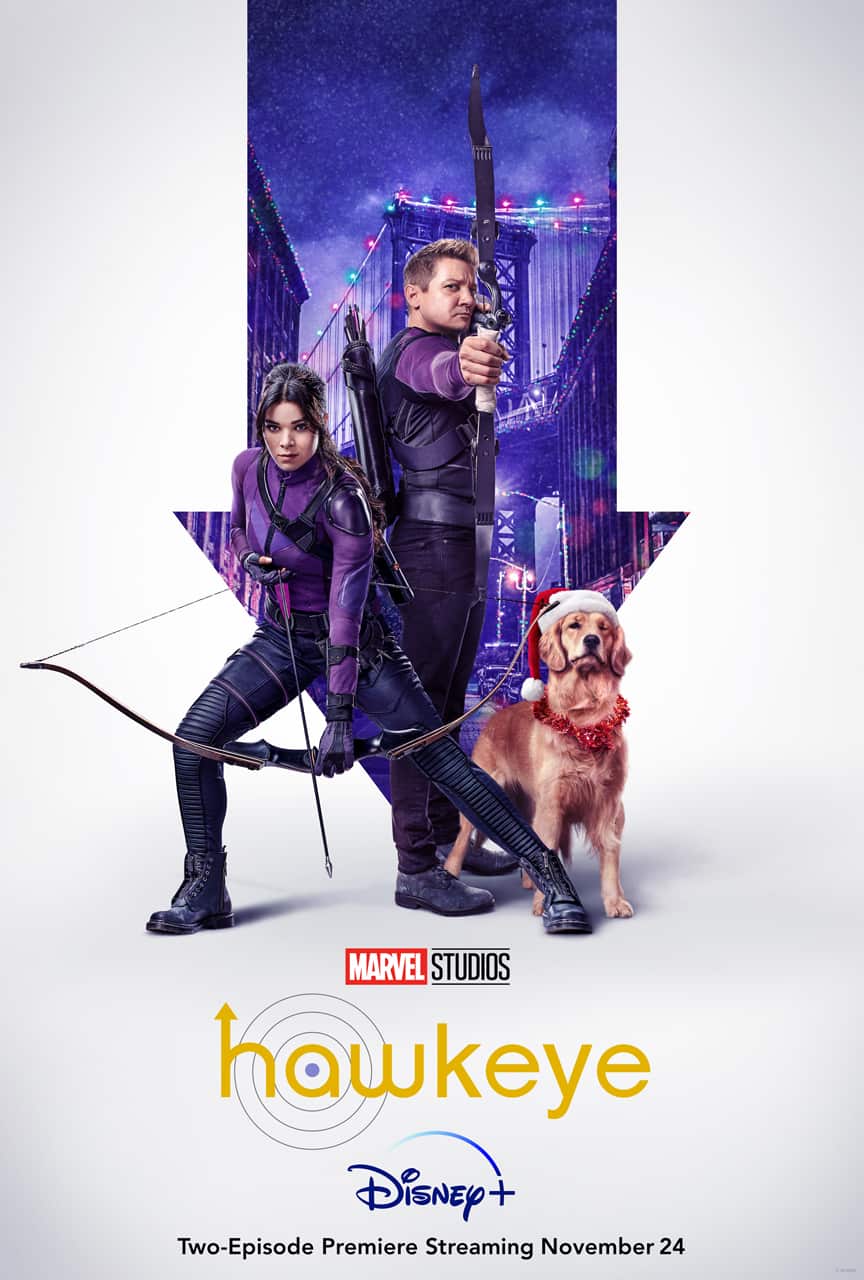 Episode Title: So This Is Christmas?

Clint and Kate’s partnership is put to the test as they face the devastating consequences of exposing the conspiracy.

It’s really weird to be writing this review because it felt like the series didn’t start that long ago, but the Hawkeye finale is here just in time for the holidays. Although I doubt that this episode/series will be the reason why families will fight with each other when they gather this holiday season, there will still be some great moments that everyone will share as well as some weird, even controversial moments.

Episode five had set us up for this finale: the backstory and motivation of Yelena, Kate’s revelation about her mother’s not-so-squeaky reputation, and finally the big reveal that has been rumored for a long time – the return of Kingpin. This episode resolves a lot of questions and fan wishes that we’ve had since the series started, such as who killed Armand III (although no one seemed to be curious about how weird that he was a great-great-grandfather), the significance of the watch that was found at the black market auction, the name that is given to Pizza Dog, more trick arrows and outfit reveals, how is everyone involved with the Kingpin, and will Clint make it to his family in time for Christmas.

However, there are still questions that remain after the season finale, such as why did Maya and Kingpin want the watch that was being sold at the black market? Why did Eleanor order the hit on Clint? Although you can argue that she did this to get rid of him investigating Armand’s death, the timeline with her phone call and how quickly Yelena showed up in New York is still a little suspect. And finally, what is the fate of a particular character? The finale implies that this particular character is dead, but we actually do not see this happen on screen so this will be a subject of debate, almost at the same level as “Is Tony Soprano dead at the end of the series?”

There’s also been a rumor or statement circulating on social media that this episode will also answer the hotly debated question, “Are the other Marvel properties, such as the Netflix series, Agents of SHIELD, etc. a part of the MCU canon?” While at first glance it doesn’t appear that this episode answers the question explicitly, it does seem to answer it (or at least imply). I won’t say what that answer appears to be, but I’ll share that the clues lie within two places in the episode: First is the way that Wilson talks about his relationship with Maya (and you will need to be familiar with Kingpin’s origins from the Daredevil Netflix series), and second is the revelation of who the mysterious watch belongs to (and you may need to do some digging on the internet about what we found out about it as well).

Although there are a lot of things I love about this episode, there is one thing I want to point out that I haven’t mentioned in my other reviews of this series, and that is the LARPers. I read the Fraction/Aja/Hollingsworth series that this show is based on, and I know how these characters show up in the show. Although they are very different from the series (in the comic run, they are all tenants of the building that Clint owns, which is how they know him), they all end up helping Clint in the climax of the story by taking on Tracksuit Mafia. So seeing how they updated the story to be LARPers and first responders makes a lot of sense here and I was happy to see that they continued this part of the story into the series as well.

Lastly, there is a mid-credits scene, and I’ll spoil it for you here because there isn’t anything to spoil. All it is is the full number of “Save The City” from the “Rogers: The Musical” show that we saw in the first episode. Although amusing, this was hardly the mid-credits scene that I (nor most people) wanted and would have rather had a different kind of scene (such as a future plot hint or a “Hawkeye will return in…” title screen) and left the number as an extra that people could watch if they wanted to. This was a big miss for me and I’m sure a lot of people will feel the same.

With that said, this episode is fantastic with a few weird flexes. Overall, it had some great resolution stories to the characters we’ve come to love. We know the fate that Maya Lopez accepts about her past and we will see her future in her own series, entitled Echo, we see a great resolution arc for Yelena that started for her from the Black Widow movie, Kingpin’s future as the head of organized crime in New York City, Kate’s relationship with her mother after it is revealed that she is part of a crime organization, and Clint and Kate’s future as partners. Even though it still has a few flaws and will probably have some fans still upset about some of the results of this episode, it was done very well that ties everything together with minimal holes in the story.

Since this is the season finale, I do want to mention some of my own personal highlights of the season, issues I still have, and what I hope to see in the future.

For me, the best episode of the entire series was Episode 3 “Echoes”. This was one of the best episodes written for any of the Marvel series projects, and Katie Mathewson and Tanner Bean deserve an award for their writing on this episode. It had a lot of action, comedy, heart, emotions, everything that made this 40-minute episode feel so cinematic, and I would be surprised if Disney didn’t put this episode up for any award nominations. The acting was superb, the cinematography was amazing, and there was hardly anything negative I can say about this episode if any!

Another highlight for me is the fact that we got to see more of the story of Clint Barton. The only Avenger to not have his own movie, the series made a lot of sense, and the perception of Hawkeye has changed significantly since his introduction in Thor. From being the butt of a joke to being a beloved character, Jeremy Renner’s Clint Barton has become a highlight of the series and of the MCU.

Lastly, the interactions between Kate Bishop and Yelena Belova are automatic fan favorites. Just as Florence Pugh stole the show in Black Widow, so did Hailee Steinfeld for Hawkeye. And after seeing these two interact with each other, it has left ALL of us wanting more of them on the screen, either in their own series/movie or a future team-up. Kate Bishop and Yelena Belova is part of the future of the MCU. It will not be the same without them.

As much as I loved the series and it’ll always be my favorite series to date, there are a few writing issues I have here. First, they need to fix how they capture texting on screen. Every time you saw someone texting, their thumbs did not match what was being typed into the screen at all, and it was so noticeable that it became distracting (which is why I’m writing about it). Although I don’t think we will have this issue moving forward because of Kate’s development, I was not a fan of Kate’s immaturity at times. Yes, she’s young and yes this show was only over a span of a week, but a feature that started out as charming quickly became annoying by the fourth episode. Lastly, the meaning of the watch and who it belongs to does not add up. I won’t reveal who it belongs to, but I’ll say this: The fact that Clint thought it was destroyed and it was somehow found at the Avengers Compound, doesn’t make sense why this watch belongs to this person.

Now that season 1 is over, here are things I hope we will see in a future season of Hawkeye (if they do another one; although all of their promos said “Season Finale”, there was no confirmation of a second season at the time of this writing). I hope that we get to see Kate move out to LA and start a practice as a private investigator. The show has definitely dropped hints of this and I think that is where they will go for the second season (and maybe we will even get an appearance from Jessica Jones). I also hope that we will still see Kate team up with Yelena and Clint and that maybe we will get introduced to Clint’s brother, Barney (and he may even become a villain for the second season). Finally, I hope that by the time the second season starts, we will see David Aja (and all artists that influence the storyline and artwork of the Hawkeye series) will be fairly compensated for their work that inspired the show.

Overall, this episode (and series) was fantastic. Yes, it had its flaws and there are a few things that fans may not be happy with, but those issues are minuscule compared to what Hawkeye gave us: Great story, great characters, and great hope for the hero in us all.

Hawkeye 106: A Great Finale With A Couple Weird Flexes (But Sure)