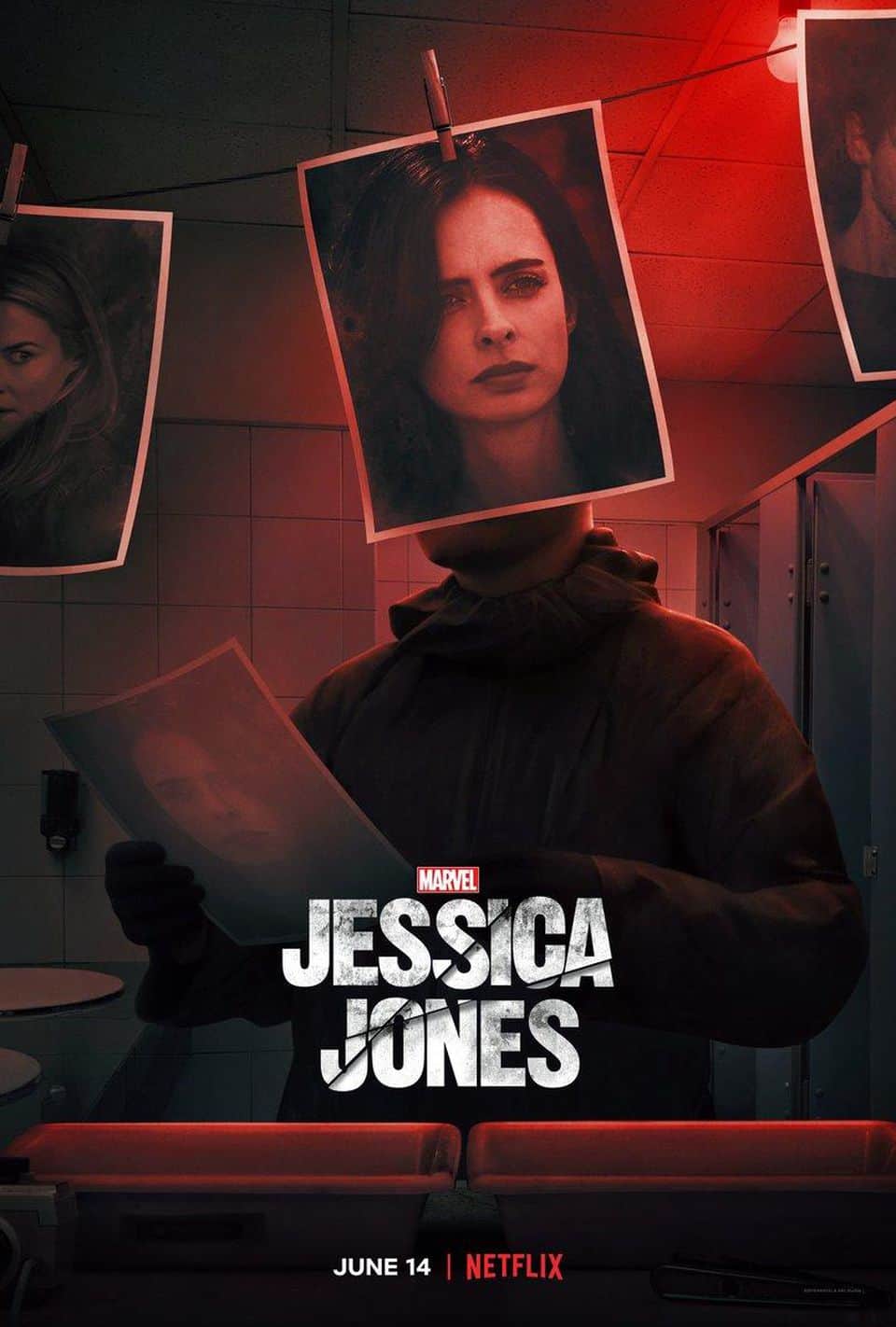 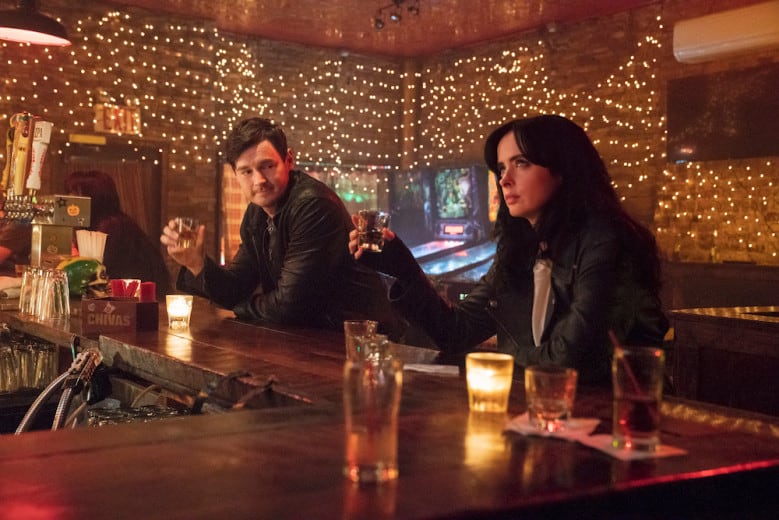 E1: JJ is teaming up with a detective Costa and taking pro bono cases. Malcolm is doing "the lords work" for Hogarth as her chief investigator and is leaning into his own confidence and strengths. Hogarth invites Jessica to her home and wants her to help her kill herself when her ALS kicks in full. Trish is missing and her mother hires Jones to find her. They clash after Jessica jumps in to save Trish from being shot by a criminal she's been tracking. Trish claims to be super-powered (with undisclosed limitations/capacities) and is now trying to be the hero NYC needs. Jessica is later stabbed by a masked assailant while hooking up with a roguish, niceish guy (Erik) she met at the bar.

E2: a few moments of seemingly above average physical abilities causes Trish to believe she has superpowers, and she fully throws herself into the role of the lone vigilante superhero. Trish hires Hogarth to legally watch her back when one of her targets recognizes her and tries to sue. Malcolm shows that he's come into his own with his pragmatic, morally questionable methods, but Trish frowns upon them. 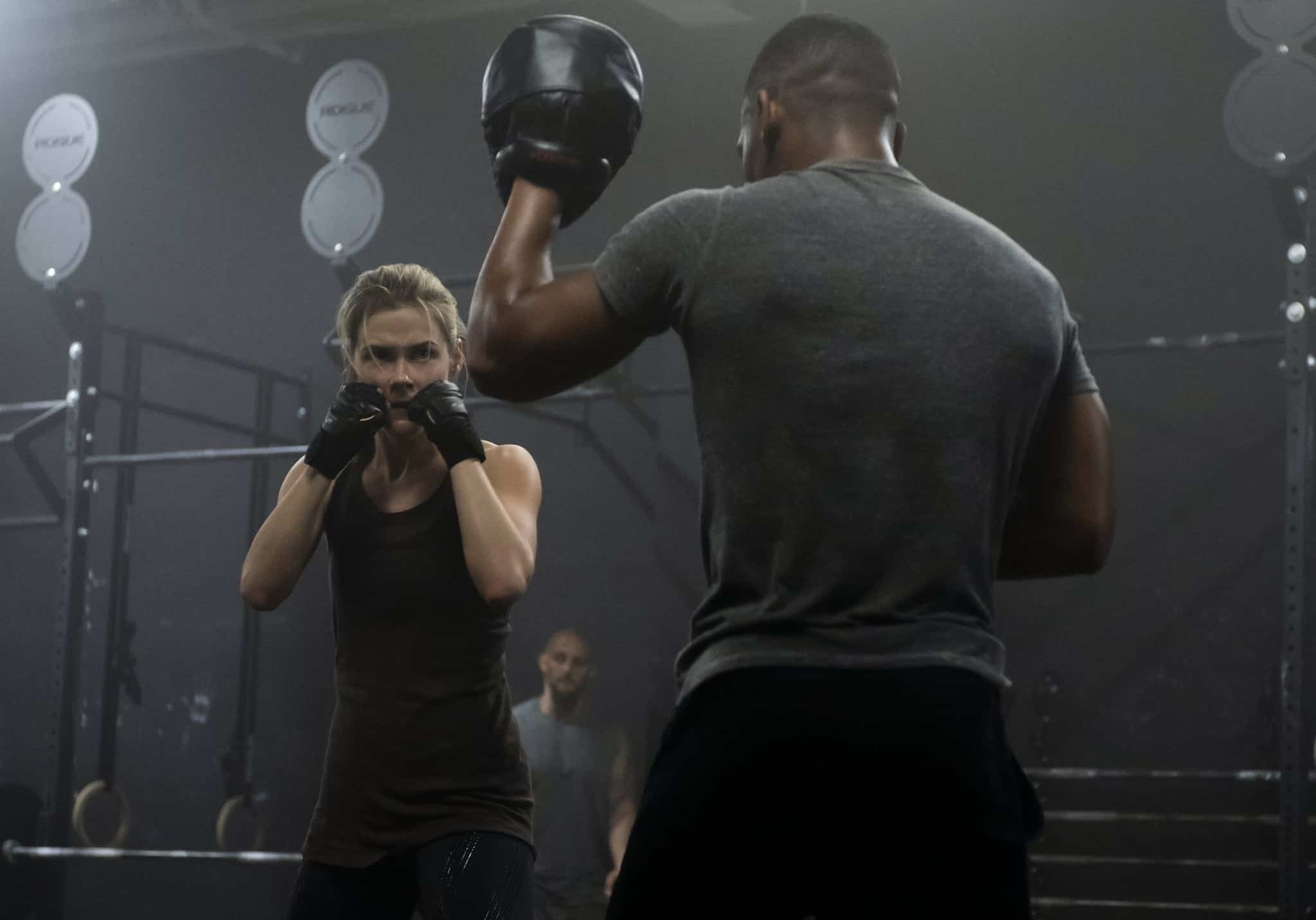 E3: After finding out she lost her spleen from the stabbing, Jessica releases herself from the hospital against doctor's orders. She then begins her investigation into Brant (the guy Trish was tracking and the one they suspect is behind the attack). Hogarth reconnects with an old flame (Kith) then sends Malcolm to investigate her husband.

E4: Jones deduces that new guy/Erik was her assailant’s actual target, but she got improvisationally stabbed to cover the attackers escape. Turns out Erik is not only a gambler/blackmailer but also has the latent super-power to sense when someone devoid of conscience is near. Trish continues to investigate, despite Jones warning her off, and is confronted by Malcolm when she's caught using his workstation at Hogarth's (he lets her go). Meanwhile, Jessica and Erik track down the people he's blackmailed. Fully self-interested, Erik leaves to pay his bookie after the first two pay up, but the third ends up confronting Jones after she breaks into his apartment. Ready for her, he (Gregory Salinger) has rigged his apartment with cameras, chasing her off with a call to 911. A freshly-saved (by Trish) Erik waits for Jones at her place, but again, he's off when she tells him blackmailee number three is a serial killer. Jones contacts Trish live on her TV show and covertly tells her she wants to team up. 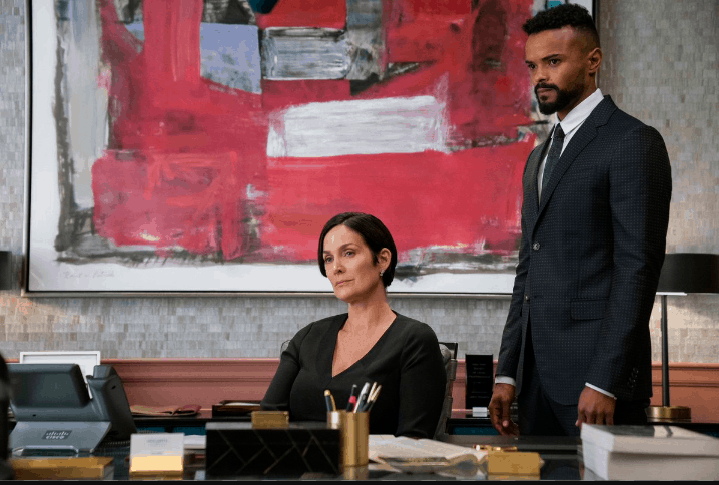 E5: Jess and Trish stake out Greg's apartment. Hogarth indirectly exposes Kith's husband as an embezzler in order to get him out of the picture. During their surveillance, Jones witnesses Erik and Greg have an amicable encounter, after which Erik crosses the street and picks up a hooker, then takes her into a building on Jessica's side of the street. Jones follows Erik. Apparently, the hooker is Erik's sister, and Greg was only there to meet him to threaten them. Jones pays Malcolm to babysit sis and they continue their investigation of Greg. Kith's husband kills himself live online, publicly blaming Hogarth and her firm for it, after which Kith tells her to leave her alone. Through some subterfuge, Trish and Jones track Greg to where he may be hiding his trophies (Trish's powers seem to be enhanced reflexes/agility and night vision). Greg lures Jones into a tanker with his trophies, trying to kill her with acidic fumes; Trish saves Jones instead of pursuing Greg, then apologizes for killing her mom. Erik's sister calls her pimp over and he sucker punches Malcolm, then takes her away. Later, Greg ambushes Erik in his apartment, KO-ing him with a chokehold.

E6: the PD extracts Greg's trophies from the tanker and Jess gives his info to detective Costa. Greg has Erik and intends to make him his next victim. Hogarth holds a team meeting which Malcolm misses so that he can go beat the crap out of Erik's sister's pimp. Greg calls Jones and lets her know he has Erik. Costa gives Jones Greg's victim list, but one is missing from the photos Greg took of them. Team Jones figures out which photo, after which Jones throws Trish out a window in front of her mother, exposing her as a super. Greg exposes Erik as a super and Team Jones tracks down the eighth surviving "victim". He leads them to Greg, just in time to stop him from killing Erik. Hogarth's firm loses the Rand Corporation as clients (2/3 of their business). The evidence that Greg is the serial killer is circumstantial at best, so Team Jones needs to find another way to put away Greg, but that means Erik would have to testify and to go to prison for at least a year (and suffer the accompanying, death-inducing migraine). 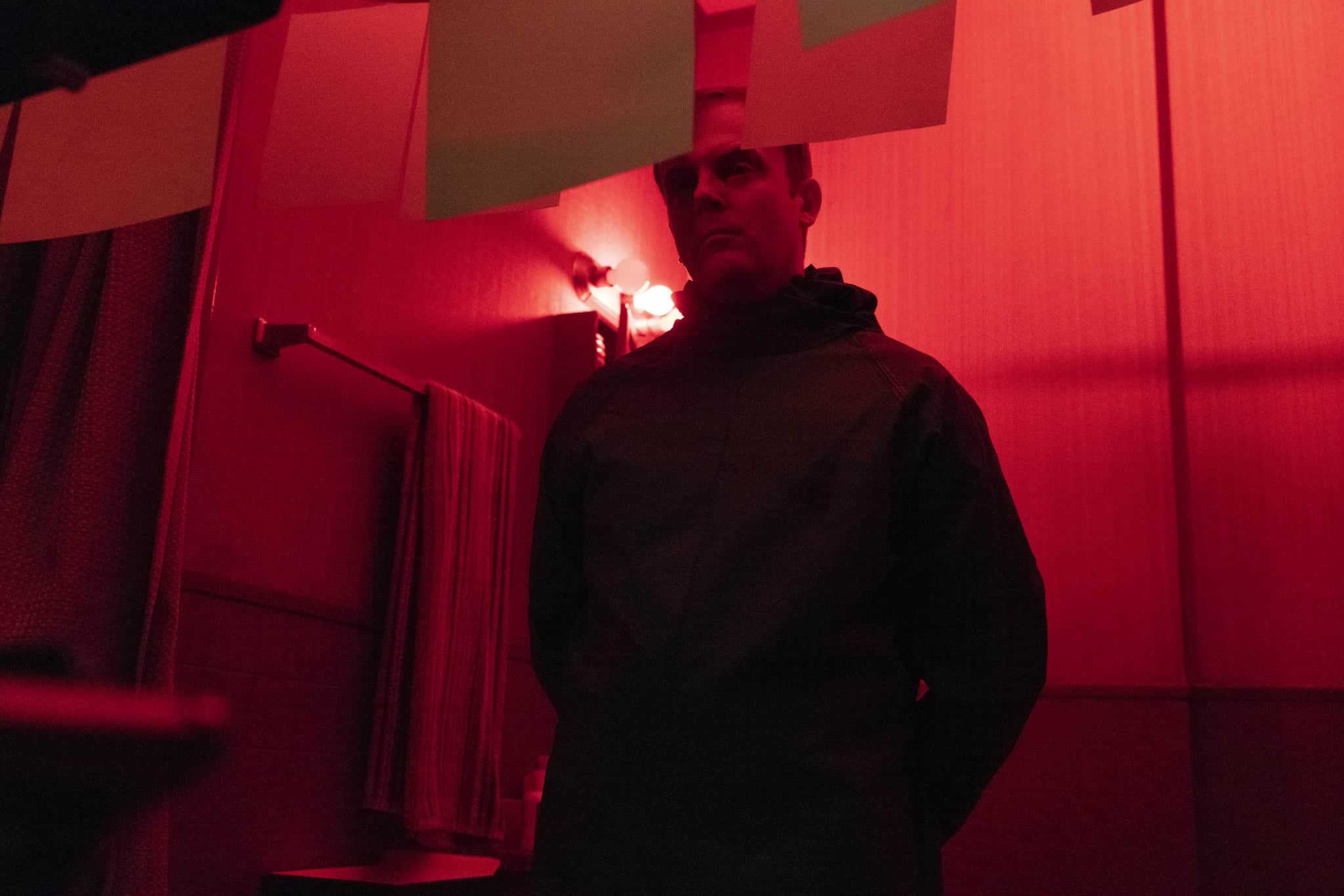 E7: Hogarth takes Greg as a client and Malcolm regrets cheating on Zaya with Erik's sister. Team Jones researches Greg's first kill (his own brother), only to find out he had an alibi, so they try to figure out who his first kill might've been. Hogarth and Zaya figure out that of the 5 criminals that claim to have been attacked by a masked woman, three are clients of theirs. Team Jones goes to Greg's home town and uncovers an old classmate's body. Zaya finds out Malcolm let the masked woman go after she looked at Hogarth's files. Jones and Malcolm stalk Greg to where he coaches kids wrestling. Jones accepts his wrestling challenge and humiliates him in front of his students and the internet.

Despite total cancellation of the Defenders-hero series on Netflix, season three of Jessica Jones is back and true to the quality formula we’ve become accustomed to. The pacing is a bit better this time around and has a much more interesting antagonist than last season’s miscast role of Jones’ mother. Much like I said in my review for season two of Iron Fist, you may only enjoy this season of JJ if you like the characters.

With regard to character development, all members of the main cast are in interesting places. Jones and Trish have fallen out, but Trish may now have powers which enables her to step out of Jessica’s super-shadow. With detective Costa’s help, Jones is in a better position than ever to be an effective hero-type, but the pressure and her self-loathing continues to drag her away. Hogarth continues to struggle with onset ALS and the rigors of her fledgling law practice, the stress of which pushes her to rekindle a relationship with “the one that got away”. Malcolm is finding his conscience an inconvenient barrier that will keep him from reaching his full potential. The supporting cast is wonderful as well, and the additions of Gillian, Erik and Gregory to the mix are welcome and very well cast. 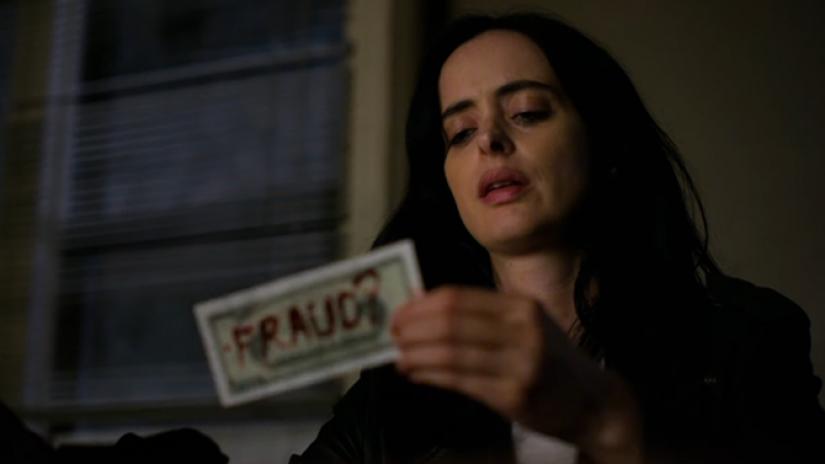 This season of JJ is leaning hard into heroic and ethical themes, with Trish taking the position of the optimistic altruist and Jones as her usual conflicted, pragmatic self. Erik is pragmatic as well, but is far more into the realist-fueled, self-interested side of the spectrum. Malcolm has had enough of the world beating him down, so he’s decided to become the hammer instead of the nail. Hogarth is having an end-of-life crisis and is trying to ruthlessly strangle every last drop from the remaining time she has left. Season three is traversing the many layers of gray-area ethics and morals, all the way down to the way Greg justifies the killing of his victims. These themes include ambiguity of legal justice and personal vengeance, as well as the exploration of the consequences of jealousy, avarice, covetousness, self-delusion, hubris and other similar problems. Fortunately, season three investigates these superhero tropes in an entertaining and satisfying fashion.

I’ve personally found it enjoyable to witness Jessica’s successes and failures. Trish’s “masked woman” journey has also been fun to see, with episode two following her exclusively as she traversed the path to becoming a competent vigilante solo-act. Malcolm’s life has been particularly hard and though it’s been satisfying to witness him come into his own, I cringe every time he messes things up with Zaya, but cheer as he pulls away from Hogarth’s amoral practices. Gregory is an insidious, menacing, infuriating figure and has been perfectly performed and written as the antagonist of Team Jones.

One-half happily binged, one more to go. Thus far, Season 3 of JJ is superior to other Netflix Defender's outings; it's a shame to see it end.