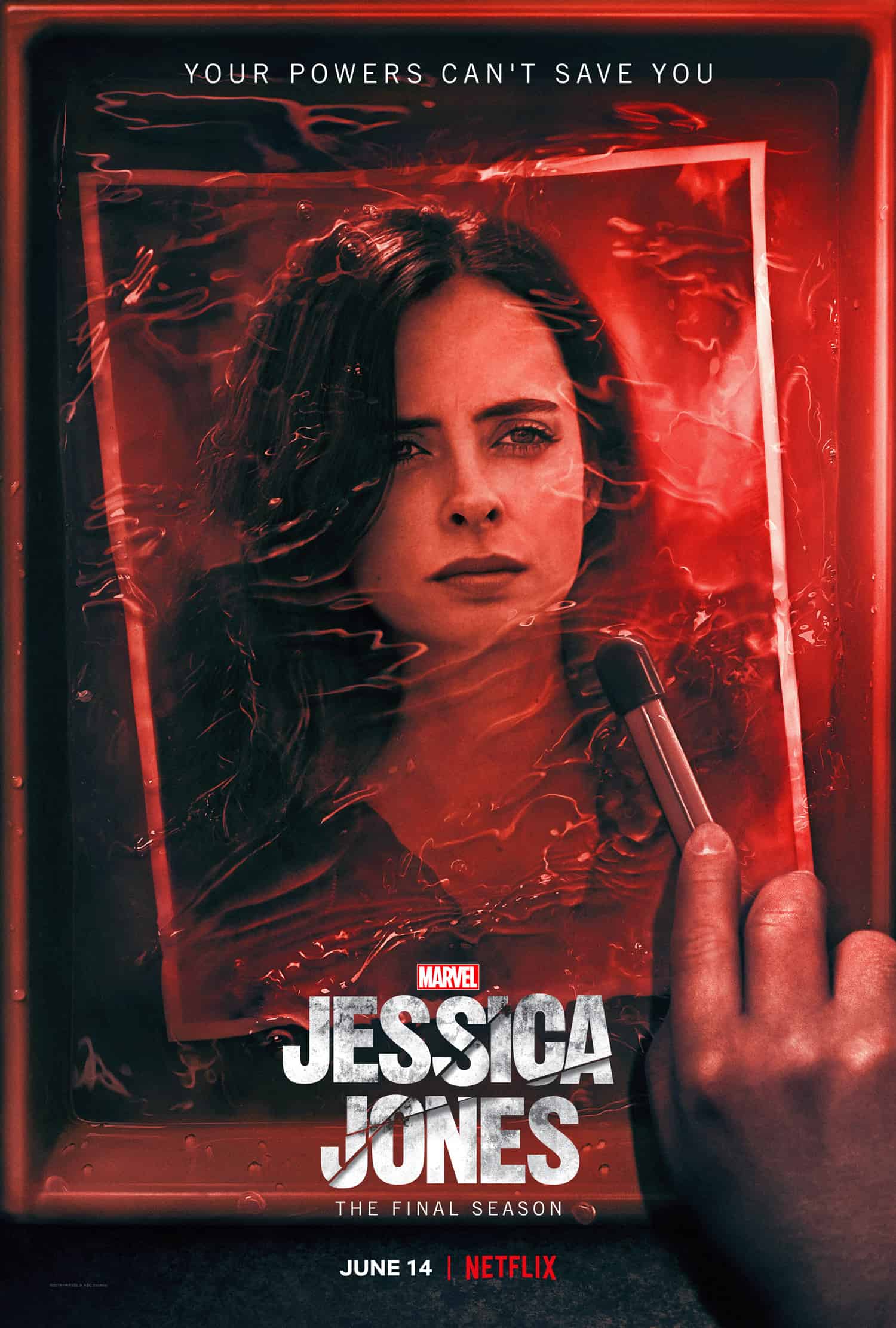 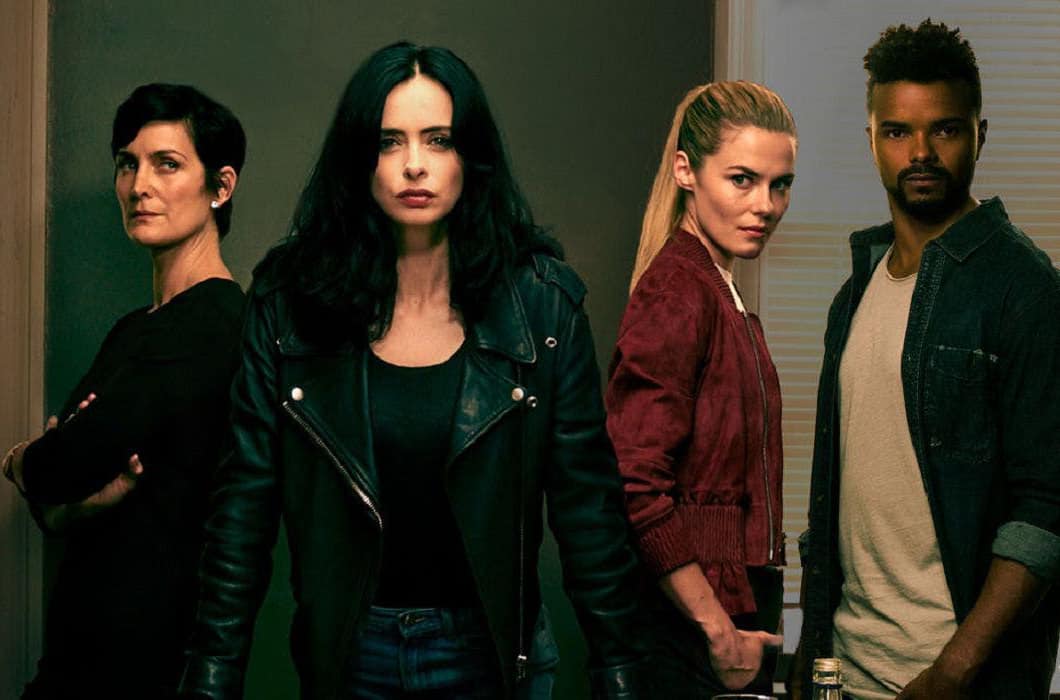 E8) Greg sends Jones a self-deleting video message stating he's going to stalk and kill someone shown leaving a restaurant. Jones and Costa arrive at Greg's apartment to find him missing, so to force more communication, Jones enrages Greg by sending him a video of her smashing all of his accolades. He sends her more stalking footage, but it's all a misdirection as Trish later returns to her flat to find Dorothy brutally murdered. Jessica speeds over to Greg's where the scene ends with her trying to stop Trish from killing him.

E9) Jessica keeps Trish from killing a brutally beaten Gregory, who also identified Trish. However, he is keeping her identity secret in order to blackmail Jones into keeping him (and Trish) out of prison. Erik turns up again volunteering to help. Hogarth puts out a 250k bounty on the unmasking of Trish's vigilante persona. Kith's son hires Hogarth to help defend her through the fallout of her husband's death. Erik and Jones find a cop he blackmailed so they can get into the evidence lab. Kith rejects Hogarth. Jones destroys the evidence that implicates Gregory, and though Trish is upset, she gets over it. Malcolm quits his job but Hogarth realizes he knows who the masked woman is (and she subsequently finds out it's Trish). Costa is put on leave for allying with Jones, and she is put under suspicion for the murder of the cop (Nussbaumer) that helped her get into the lab.

E10) Jones is harried by detectives while she and Trish plan Dorothy's funeral. Kith accepts Hogarth's help. Erik denies killing Nussbaumer and Malcolm gets hired by Jones to investigate, he also breaks up with Zaya. Nussbaumer's killer took his badge, which is the evidence everyone is looking for. Jess sleeps with Erik then searches his apartment while he's asleep. Hogarth terminates her employment with Gregory and Kith accepts her help; Hogarth intends to blackmail Trish into investigating for her. Brianna (Erik's sister) moves in with Malcolm. Dorothy's funeral is sweet and the police are on their way to arrest Jess, but she sees bruises on Trish's arms during her eulogy and bails. She is then caught by the police while tailing Trish. Later, Erik can be seen waiting outside an office trailer while Trish is beating someone to death. 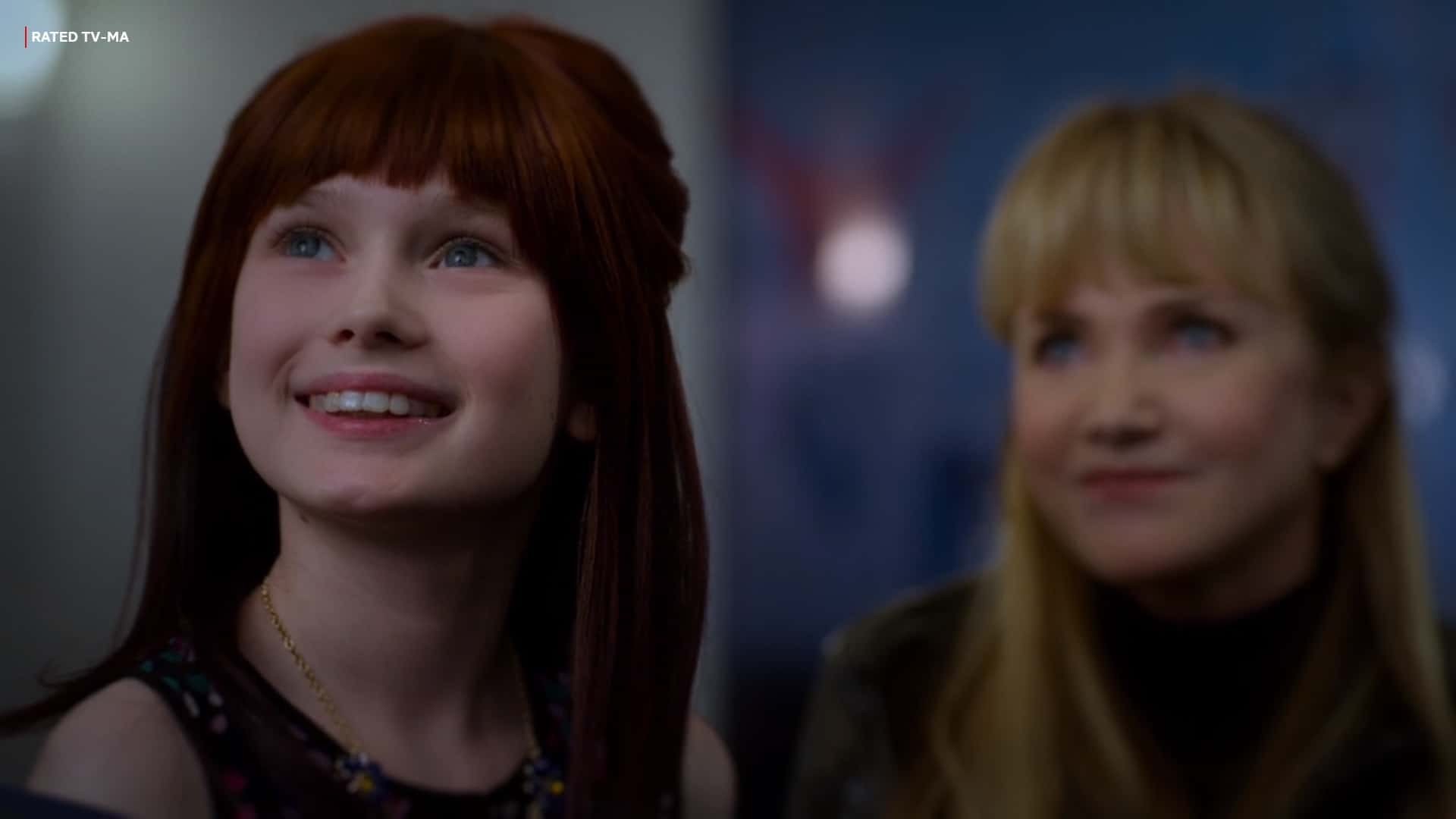 E11) Events after Dorothy's death unfold from Trish's point of view, including flashback memories from her childhood of Dorothy grooming her to be Patsy. Trish actually beat up the guy beating his wife next door, she also visited Gregory in the hospital. She follows his clue back to Dorothy's home where she finds a photograph Greg took before killing her. Trish meets Erik and talks him into tracking "soulless" people for her vigilante justice, starting with Nussbaumer. They lured him into a warehouse and Trish accidentally killed him. When Jones became a suspect, Trish and Erik planned to get her an alibi by assaulting someone after she's arrested. Before the funeral, Hogarth blackmailed Trish into helping her. Team Trish traps Jessica, getting her arrested, but Trish ends up killing their target later that night. Erik freaks out and Trish strikes out on her own.

E12) Jones is released from police custody and gets to Gregory just in time to keep Trish from killing him. While staking Gregory out, Trish is ambushed by Malcolm and Erik and is imprisoned in her own loft apartment. After drinking with Erik at the bar, Jessica goes home and drinks whiskey drugged by Gregory. Malcolm and Trish discuss morality while Jones and Gregory verbally spar. Jessica then reveals that she never drank the drugged stuff and she and Erik recorded all of the interrogation (and his confession of Dorothy's murder). Trish ambushes Gregory while in police custody and stomps him to death.

E13) Jones is devastated by Trish's actions. Hogarth looks shaken and asks Jones to tell Trish that she won't tell her secret and that she's nothing like Greg. Luke Cage shows up at Jones' door, wondering how she's doing and to give her moral support to help her bring down this super friend of hers. Jones finds Trish sitting alone at her apartment and asks her to turn herself in. Erik arrives and forces himself close to Trish, showing the pain she's causing him. Jones stupidly lets Trish take a shower and she escapes. Hogarth tells Kith about her ALS and Trish tells Hogarth she wants to stop the "monster" (Dimitri) that's trying to sue Kith. Trish beats him up but his daughter intervenes (after calling the cops) which chases Trish away. Hogarth and Jones set up a trap for Trish, but she takes Kith hostage. Hogarth shoots Jones in the leg to keep her from interfering and trades herself for Kith as hostage. While Hogarth helps Trish find transport out of the U.S., Jones goes viral with a video outing Trish as the masked vigilante. Hogarth pays for her passage abroad, but Jones tracks her down and they fight it out. Jones wins and Trish goes to prison. Kith leaves Hogarth for good. Jones is declared a hero in the papers, and she tells Erik she doesn't trust him, which he takes in stride. Jessica retires from Alias Investigations, passing it to Malcolm. Costa meets with Erik at Jones' request, hoping their partnership cleans up his act. Jessica watches Trish board the plane to The Raft, then goes and buys a ticket to El Paso, Texas. Suddenly her Killgrave “conscience” from season 2 kicks in and guilts her into staying and being a hero in New York. 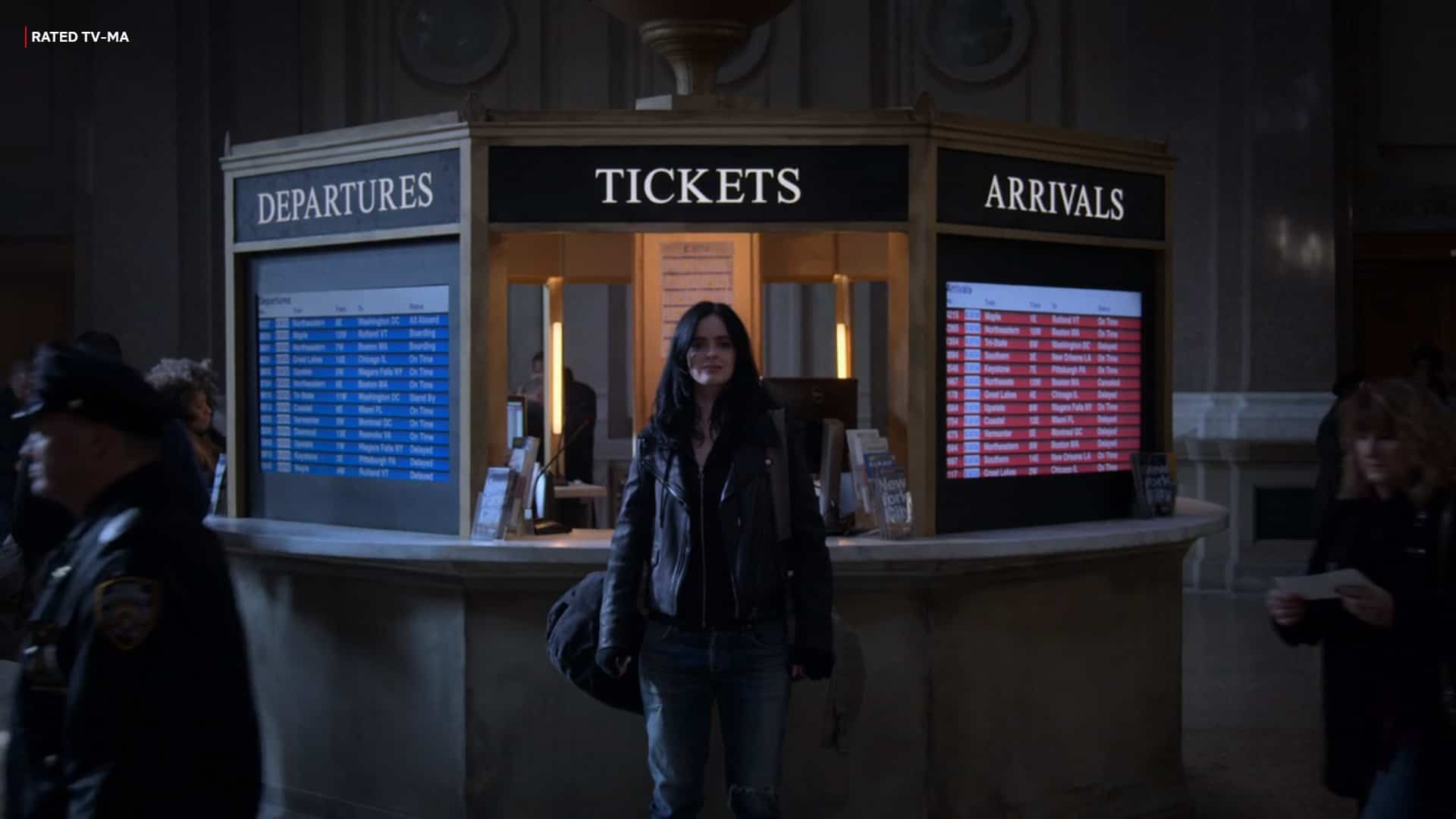 Once again I reiterate, this season is quite good IF you like the characters. Though Trish was heading down the path of ethical decay in the first half of the season, she ends up bounding down the spiral staircase of it in the second. It turns out her jealousy of Jess is truly fueled by her mother’s dysfunctional, desperate, self-absorbed obsession with success; and the resulting Patsy persona turns out to be the true face of Trish Walker. Though her character becomes quite unlikeable, I think you have to be somewhat dead inside to not empathize with Trish and the premature death of her childhood. I am somewhat disappointed with how quickly Trish is taken down after going full “Hellcat”, but what are you gonna do; overall, I think Trish makes a great supervillain.

Dorothy’s death is shocking and her funeral somewhat touching; she was indeed a formidable, infuriating, cringe-worthy woman; but I also think she was a monster. She was definitely a character I loved to hate and this season really did her justice.

Speaking of love-to-hate characters, Jeri Hogarth was (once again) wonderfully portrayed by Carrie Ann Moss, with every choice she made being “very Jeri”. I quite love that her writers kept her character true-to-form, notwithstanding her stint with brushing elbows with “true heroes” in the past. The rest of the supporting cast consisting of Gregory, Malcolm, Kith, Brianna and Erik were also portrayed extraordinarily well, helping to make the season kinetic and vibrant.

I think the show successfully portrays Jessica Jones as a true reluctant hero, with her internal struggle with restraint ever-present on screen, but never letting it feel contrived or forced. The way she ends things with Erik was well thought out and I found how she later connects him with Costa quite touching. I never once felt Jessica’s moments of vulnerability made her appear weak in any way, which is quite a feat in its own right. 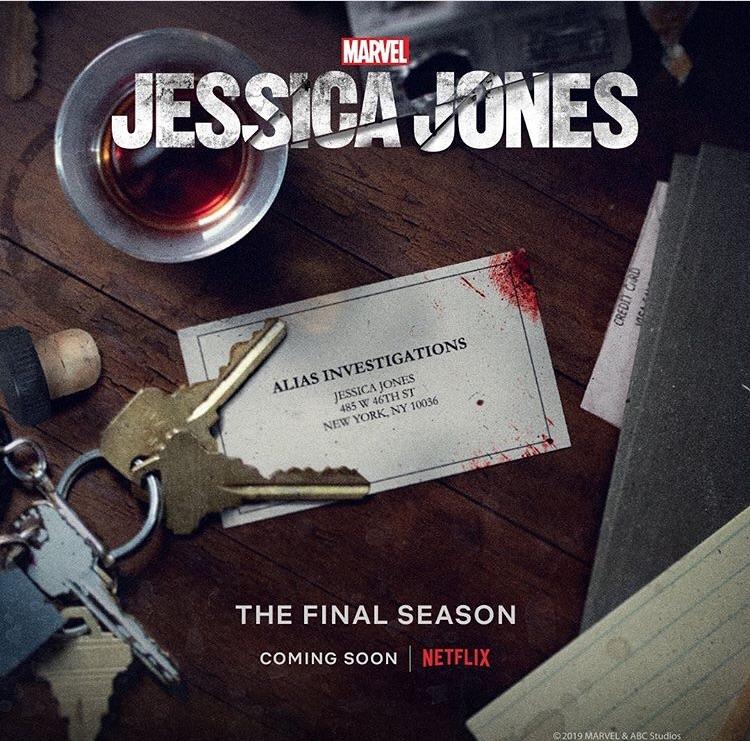 I’m going to sincerely miss this show and all (yes, ALL) the other Netflix outings by Marvel Studios.

Falcon and the Winter Soldier: How the World Turns
April 17, 2021