Our Memories of Nichelle Nichols First Lady Of Space 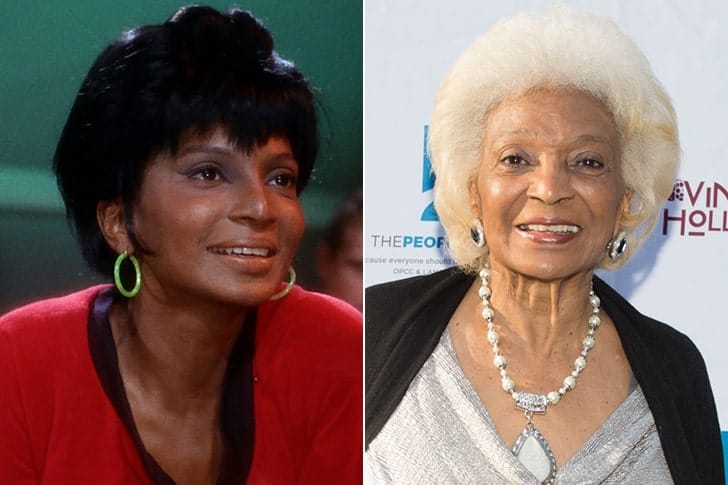 My Memory Of Nichelle Nichols
By J.A. Fludd
Let me offer you my own personal story about the one time that I saw Nichelle Nichols in person and some of the things that stand out for me about the creation of the character.
It was October 1987, one of the most eventful months of my life, other parts of which I’ve laid upon you elsewhere. But it so happened that in that month, which saw the dazzling and dauntless debut of Star Trek – The Next Generation, I was invited to a high-school friend’s wedding. And I really, honestly did want to go because I always liked this guy. However, there were going to be some other people present who were close to the groom, whom I really did not want to see for reasons we do not want to talk about here. I did not trust what ungodly things I might say or do to these two people in a church at someone’s wedding. So I really needed a way to get out of it.
To my rescue came a Star Trek convention—and my first-ever (and sadly, only) opportunity to see Nichelle Nichols. Nichelle is one of those women, like Diahann Carroll and Mary Tyler Moore, with whom I have always been chastely in love. You must understand, it was a combination of things that made me love her. When Star Trek was first on, I used to watch it—on NBC when it was brand new, if you please—with my family, and it was the height of the Civil Rights movement. At the time I didn’t understand what was going on with that; I only knew that Star Trek was cool in a way that nothing else on TV was. It was science fiction. It was space and aliens and monsters. It was exploring the galaxy every week. And there was this woman on it who made people sit up and take notice. At first I used to pronounce her name “Ura-hura.” I didn’t get the hang of that for a while. But I knew she was special and important. And beautiful—“Diahann Carroll” beautiful. (In fact Star Trek predated Julia by a couple of years, so I “met” Uhura before I “met” Diahann. They were both on NBC, a couple of historical landmarks to the credit of that network!) So while I didn’t get her significance at first, I got the significance of everything that she was a part of, and that and her beauty were enough.
With regrets, I nixed my old classmate’s wedding with the explanation that I should have cancelled my OWN wedding for a chance to see Nichelle. And off I went to the convention while my old classmate was getting married just a few blocks away, if I recall correctly.
When Nichelle spoke, the place was packed and I got to see her only from a distance, but even from a distance she was everything you’d expect her to be: lovely, elegant, graceful, well-spoken, and stunning. And she had some interesting things to say. She talked about how they hadn’t really created Uhura yet when she went in to audition; she was just an idea, so when she auditioned she read lines written for Spock. And her first question to the producers was something to the effect of, “Tell me about Spock. What does she do? Who is she?” Nichelle won the role, reading the lines of a character who was male and extraterrestrial, and she was on her way.

She spoke further about how she worked with Gene Roddenberry in developing Uhura. Fascinatingly, Nichelle talked about how the character most critical to the development of Uhura was, in fact, Spock. She told us how Spock was Uhura’s Starfleet mentor and role model, who had set for her the example of the kind of officer she wanted to be, which was very illuminating because of the few glimpses that the show gave us of the relationship between the two. If you look at “The Man Trap” and “Charlie X” in particular, you notice that Uhura was the only character except for Kirk and Bones who could speak her mind to Spock and stand up to him, even tease and taunt him, and get away with it. And Spock, in his emotionally sparing Vulcan way, liked and respected Uhura, even thought of her as a peer. One of the really unfortunate things about TV in the 1960s was that there were such limits on what could be done with Uhura. In that same show, done today, Uhura would be even more of a standout than she was then. I’ve noticed that on the all-new Strange New Worlds show, Uhura as a Cadet seems to be developing something of that relationship with Spock that Nichelle talked about, and I hope they have continued to pursue that.
You know, of course, that very famous story about Nichelle not leaving the show because Martin Luther King Jr. himself talked her out of it. But there is another story about the other part of her career—her act as a nightclub singer—that I personally love just as much. She told that story at the convention when I saw her. It seems that Nichelle’s favorite songs to sing were the slow, romantic ballads (with which she must have been brilliant, with that voice.) Well, it seems there was one club where they wanted to cut those numbers from her act because they so mesmerized the audience that no one ordered drinks during them. Nichelle couldn’t bear losing her favorite part of the show, so she came up with an ingenious solution. At the opportune moment of her performance, the club would announce that Miss Nichols would be going into the “romantic ballads” part of her act—during which no drinks would be served. Her bit of psychology worked beautifully. Before she did those numbers, drink orders sharply ticked up! The club made out like a bandit, Nichelle got to keep her favorite songs, and everyone was happy. You see how smart and shrewd she was, figuring out how to make art and commerce work together. It’s one more reason to love her. 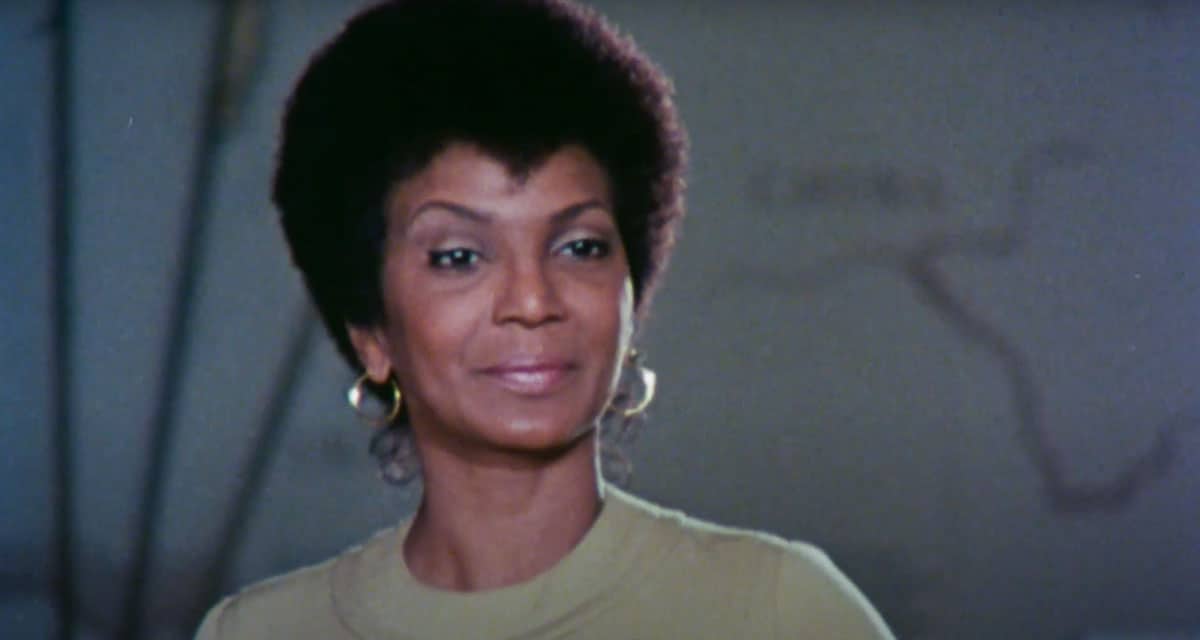 My Memory Of Nichelle Nichols
By Rickey Price
I have seen celebrities on stage at conventions. I have stood next to some big names for 5 seconds for a photo-op. I have gotten autographs and told stars I love their work. I’ve even met some celebrities and engaged in conversations with them.  But the first time I met Nichelle Nichols was an experience like no other.
I was a Junior in High School at the time, just a couple of months before Star Wars would be released and change science fiction forever. There was a Star Trek Convention held in Oakland, California, that I attended as a video journalist for my school’s Television Broadcasting class which was the only such class in a high school in the Bay Area at that time. This was back when groups of people or fan clubs would put on conventions before they were totally taken over by professional convention organizers.  I was escorted by one of the convention people to 3 of the actors from Star Trek to ask for permission to videotape them for my class. The first, William Shatner standing about a foot in front of me spoke to his agent who told me that only a local news station had arranged to tape Shatner. It was a very intimidating experience for me and I thought of just leaving right there. But then I was taken to see George Takei and I was almost too nervous to speak with him after my experience with Shatner. To my surprise, Mr Takei beamed with a smile and shook my hand and told me I could record all I wanted of him.  Finally, I went to see Nichelle Nichols. She was so warm, so friendly and elegant and she took me to a room where she was about to give a presentation to a group of journalists seated around a table and she had me sit at that table with all these professionals and she even had me sit up front next to her.  I set my equipment up off to the side out of the way. When she began speaking she told us of how she had decided to leave Star Trek at the end of the first season.  A fateful encounter at an NAACP event with Dr Martin Luther King Jr changed Nichelle Nichol’s life forever. 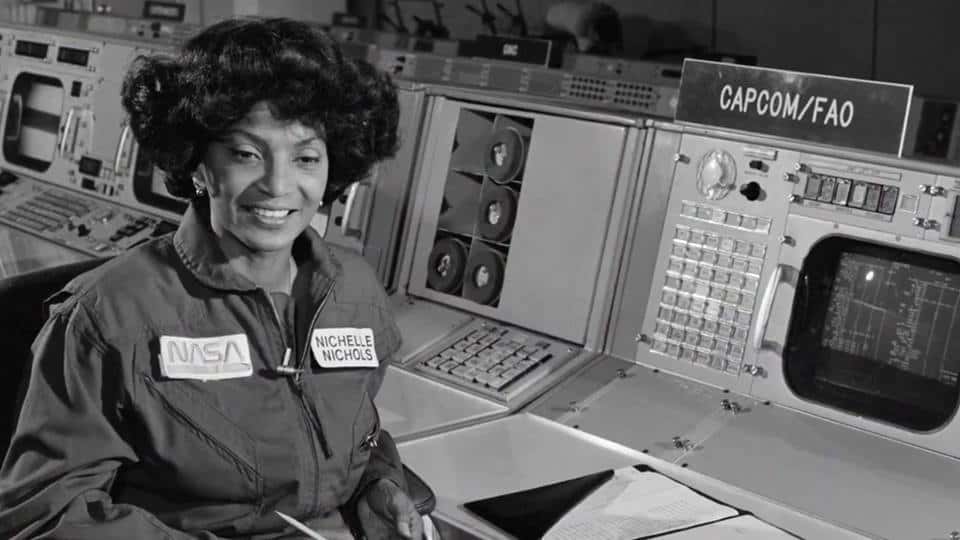 “He was a big fan of our show” she told us. “I told him I wanted to pursue a different direction with my career and that I would not be returning for season 2 of Star Trek. ‘No. You cannot. You must stay on that show’ he told me”.  Dr King told Nichelle that her role on Star Trek as an officer on the bridge of the U.S.S. Enterprise was the most important role an African-American woman had ever played on television. He told her that millions of television viewers were seeing [African Americans] being portrayed as equals for the first time. She was quite humbled she told us. When Dr Martin Luther King Jr spoke you listened. And she continued playing Lt Uhura for the remainder of Star Trek’s  run and into six feature films that came ten years later.  After telling us about her experience with the civil rights leader she went into the real subject of her talk…how she began working with NASA in 1970 to recruit women and minorities into the astronaut and space industry.
Nichelle Nichols believed that young people were the future and she certainly showed me that by inviting me to the table with the adults. I was a big science fiction nerd back then, decades before nerds became cool. I had no interest in politics but when Nichelle spoke I was mesmerized and listened intently to her speak with candor and empathy and the elegance that was Nichelle Nichols. And while the rest of that convention has faded in time (well, everything except turning down a free copy of a mylar poster with the lettering “A long time ago in a galaxy far, far away” which quickly shot up in value to a small fortune!) I still carry that memory of Nichelle Nichols  who spoke to me and treated me with dignity as did her co-star George even as the “star” of their show looked down on me.
I saw Ms Nichols a couple of years ago and got my picture taken with her. She looked tired but never stopped smiling for her fans.  And now our great First Lady of Space is gone and I am deeply saddened by the loss of a truly beautiful human being who has given so much to the world and will shine her star in the memories of the millions of people she has touched for many years to come.
Hailing frequencies out.

Our Memories of Nichelle Nichols First Lady Of Space