Peacemaker S1: Cena & Gunn Are Grittier Than Ever 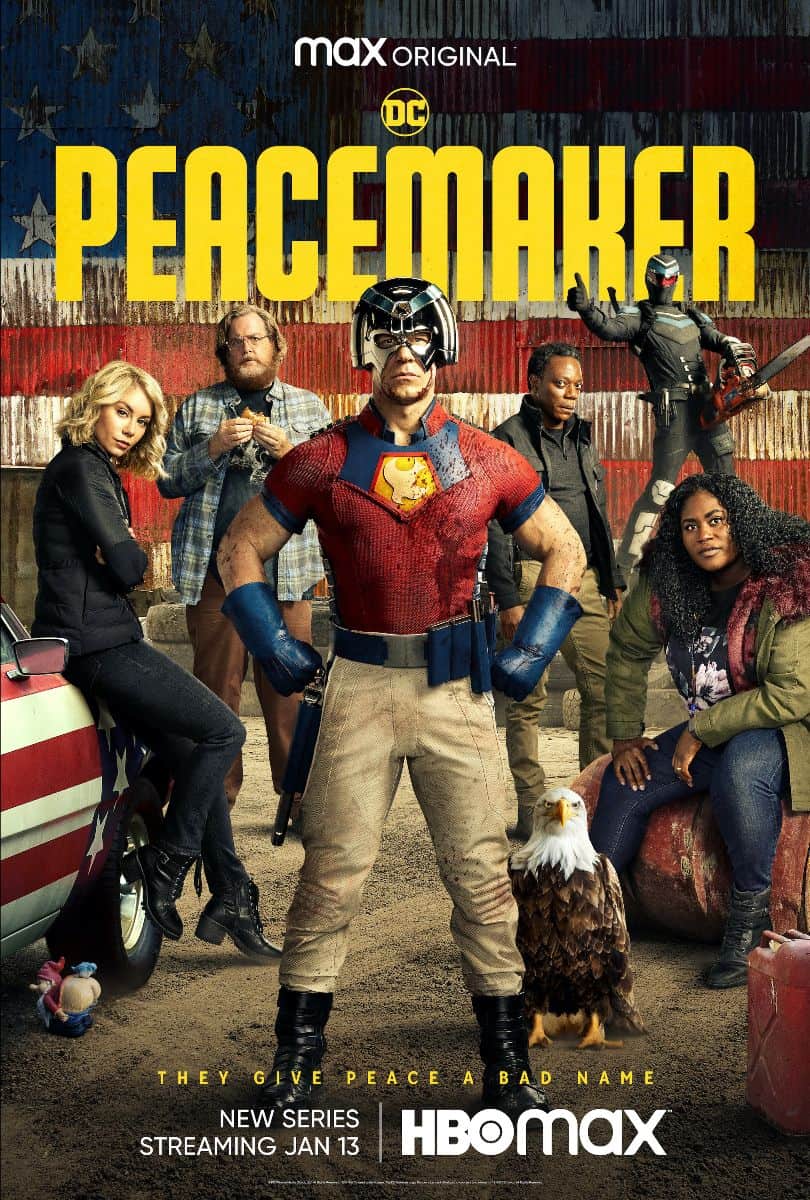 Picking up where 2021's The Suicide Squad left off, this action-packed series finds Peacemaker returning home after a miraculous recovery from his encounter with Bloodsport - only to discover that his freedom comes at a price.

Since November of 2019 when The Mandalorian was released, Disney has commanded the streaming programming market. On the heels of its success has been the Marvel shows such as WandaVision, The Falcon and the Winter Soldier, Loki, and Hawkeye. It appeared that Disney was untouchable and that DC and HBO wasn’t going to make a dent in the superhero programming wars.

Peacemaker has changed all that.

It’s undeniable that director James Gunn and actor John Cena are extremely hot and successful in Hollywood. Gunn has been successful with his superhero films Guardians Of The Galaxy and The Suicide Squad. Cena has always been a popular actor and quickly became a beloved actor with his portrayal of Christopher “Peacemaker” Smith in The Suicide Squad. Peacemaker has been able to replicate the success of its cinematic predecessor by being able to continue to tell those emotional stories, engaging action scenes, its character development and relationships, and ensuing hilarity. This is also one of the first times we’re able to get confirmation about other pockets of the DCE Universe that hasn’t been explored before (e.g Bat-Mite definitely exists!).

Gunn is best known for his selection of classic banger music in his work, and Peacemaker was no exception. In fact, one of the most discussed pieces of the show is how many people talked about the dance sequence that opens every episode and for the first time, people are complaining about the skip intro button in the show, which is something I’ve never heard of. Another almost unnoticed feature of the dance sequence, however, is the fact that it is literally a metaphorical depiction of the show. Peacemaker, being the star of the show, is front and center of the scene. Although the timing of his dance moves are in sync with his other characters, he is definitely doing his own thing and is convinced that he is cool doing it. The other characters in the dance sequence are awkwardly dancing along and it somehow works for the sequence, much like how they are also supporting him on his mission throughout the series.

The acting, writing, and production of the show is on the same level of what you expect from a high-budget film. The chemistry among all the characters are done very well. Not only do the characters develop individually, but their relationships develop over the course of the series as well. The action scenes have a great mix of hand-to-hand combat as well as guns/weapons fight scenes, which gives you a little bit of everything. The gore in the show is definitely more exuberant than what many shows may have, but it is definitely done at a level that is manageable as a viewer and is not gratuitous like what you see in a Tarantino film.

I personally struggled with episode 3 specifically because of the killing of children that was involved. Although you do not see this on screen, this is implied and confirmed in the show that Vigilante assassinated children for Peacemaker by sniper. Even though the children were taken over by the butterfly-like alien species, it doesn’t make it easier to have to watch.

That said, I do appreciate what they were trying to do with this scene as Peacemaker had a crisis of conscience, questioning if killing women and children in the name of peace, especially after finding out that people don’t think of him as a hero like he thought. However, as much as I love this show, one of the biggest issues I had was how they introduced this crisis and then never resolved it by the end of the season. This seemed like it was a large piece of his development that was either forgotten on the cutting room floor or they intentionally left it because it was used as a plot device. It could also be that they are planning to explore that more in season 2, but it could be said that they could have at least brought this up before ending the season to hint that it would be explored next season (one could argue that Smith seeing the ghost of his father was this confirmation, but it’s shaky at best).

Overall, this show has been a huge success for HBO, Warner Brothers, and DC. If they continue to produce high quality content like this on the big screen and for streaming, they can find themselves quickly on par with Marvel's own entertainment properties.

Peacemaker S1: Cena & Gunn Are Grittier Than Ever