Please Stand By: The Evolution of TV Super Heroes 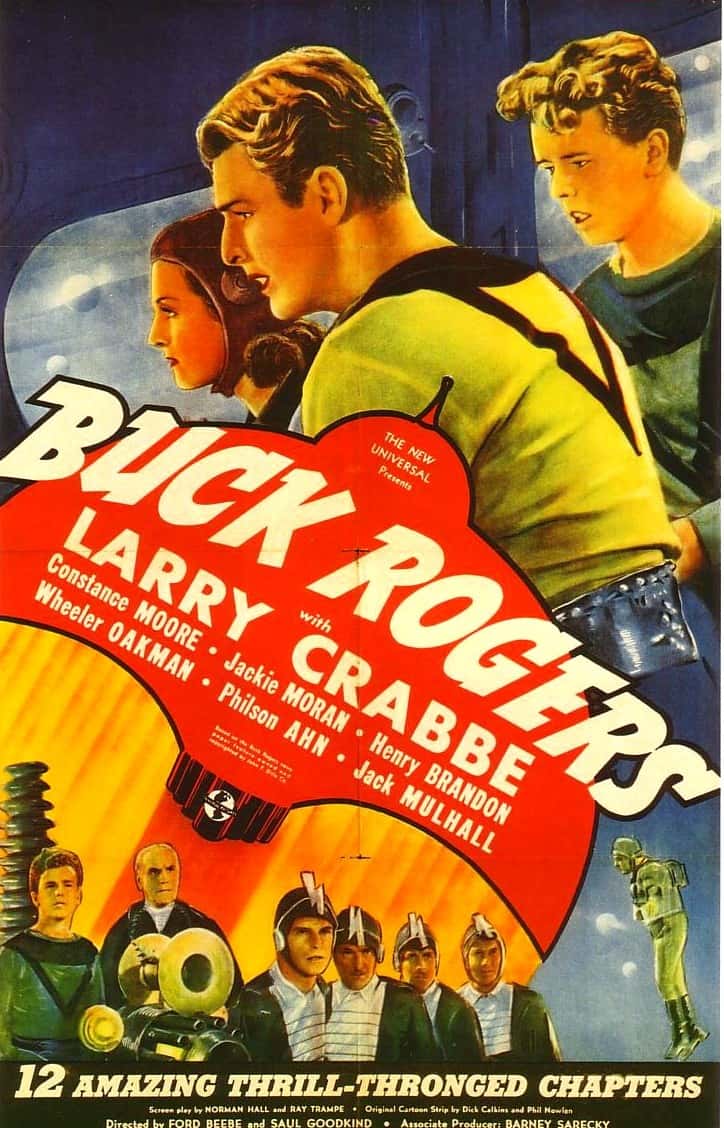 The 1980's came rocketing in with the second season of one of the oldest heroes from the comic strips, Buck Rogers in the 25th Century. Premiering in the fall of 1979, Buck Rogers in the 25th Century was NBC's try at developing a Star Wars type of TV series following ABC's Battlestar Galactica, both produced by Glen Larson. Battlestar Galactica, the better of the 2 shows, unfortunately came and went the previous 1978-79 season but would return in a darker, grittier remake in 2004. Buck Rogers was created by Philip Francis Nowlan in 1928. Buck has been featured in comic strips, novellas, a serial and television. 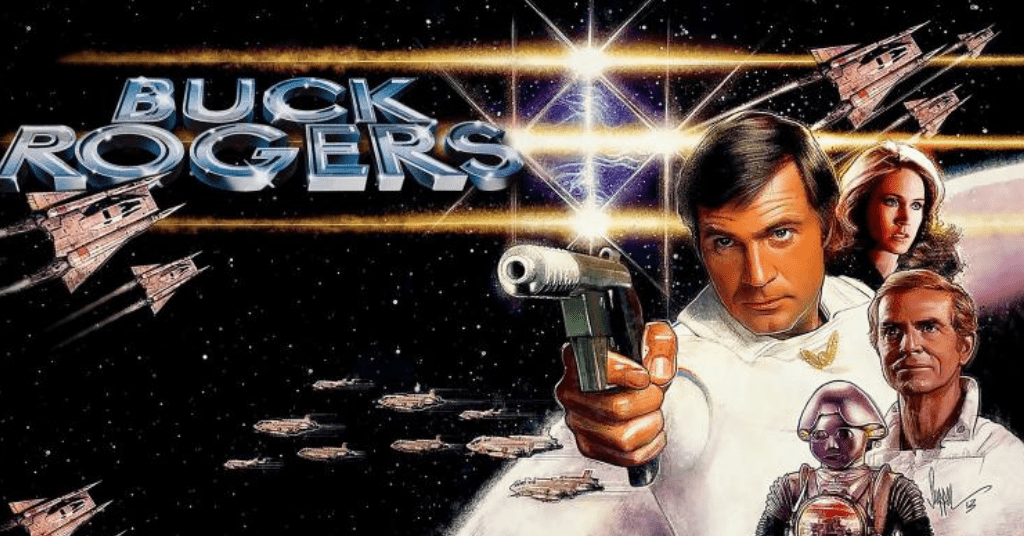 Buck Rogers in the 25th Century starred Gil Gerard as Captain William Anthony “Buck” Rogers whose ship, the Ranger 3, encounters a life support malfunction in May of 1987 and Rogers is accidentally put into a type of cryogenic suspension for 500 years. When Ranger 3 returns to Earth orbit it is in the year 2491 AD and the world Captain Rogers knew is gone, destroyed in a nuclear war that happened in November of 1987…just 6 months after Buck left. After being thawed out he learns the world has been rebuilt and is under the protection of the Earth Defense Directorate. Due to his piloting skills, Buck is accepted into the Directorate and he, along with sometimes romantic interest Colonel Wilma Deering, goes on outrageous missions against an assortment of aliens while the show played up his “fish out of water” predicament. Buck’s back up on Earth consisted of Dr. Elias Huer head of the Defense Directorate and played by veteran actor Tim O’Connor, Dr. Theopolis who looked like a big clock and was usually carried around by the final member of Buck’s entourage Twiki (played by Felix Silla) who was hands down the most annoying robot on TV or film ever with his ridiculous “biddi-biddi-biddi-biddi” voice (supplied by Mel Blanc). 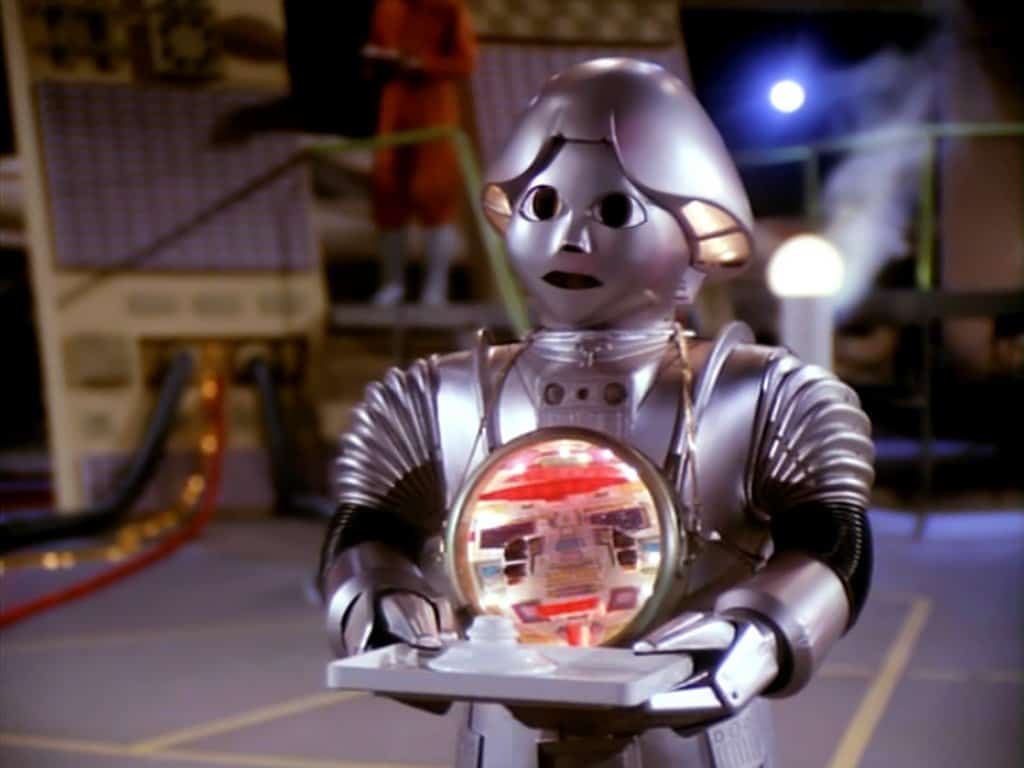 NBC took an unusual step and released the two part pilot into theaters about six months prior to its television premier. The biggest difference between the TV series and the theatrical version was the main title sequence. The titles immediately invoke a sense of “James Bond in the 25th Century” as it had “Buck’s Girls” (Erin Grey and Pamela Hemsley) rolling and frolicking around on the floor in feline movements…so it wouldn’t be wrong to call them “sex kittens”! Not wrong maybe but definitely quite sexist by today’s standards. And a little too “adult” for the television standards of 1979 so the series changed the title to more generic space scenes and clips. There was also a song called “Suspension” by Kip Lennon in the theatrical version…a more fan fare-ish version minus the vocals was used for the series. You can see the too sexy for TV version in the video below.

Feeling that Battlestar Galactica was too dire and grim, NBC sought to sex things up (by 1979 standards) and bring a lighter tone to Buck Rogers. To that end, they hired Pamela Hemsley to play Buck’s arch nemesis, Princess Ardala of the Draconian Empire. In truth, she was a spoiled alien brat who just want to possess the Earth and Buck to add to her collection. The costuming department must have had a lot of fun coming up with Ardala’s couture which was often barely more than two bottle caps and some cobwebs. 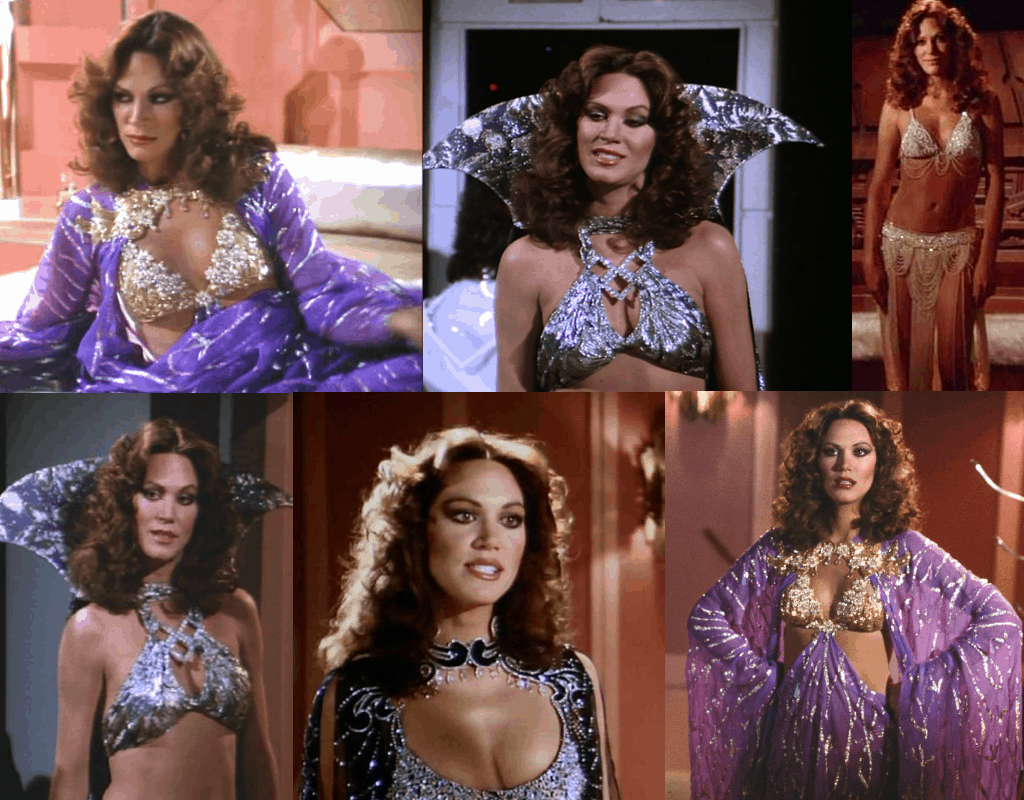 And much to Gil Gerard’s embarrassment, Buck wasn’t immune to the “scantily clad” business as most male characters were back then. A romantic relationship between Buck and Wilma was hinted at off and on but the producers were unwilling to have their hero tied down so Buck was seen with many women throughout the show. 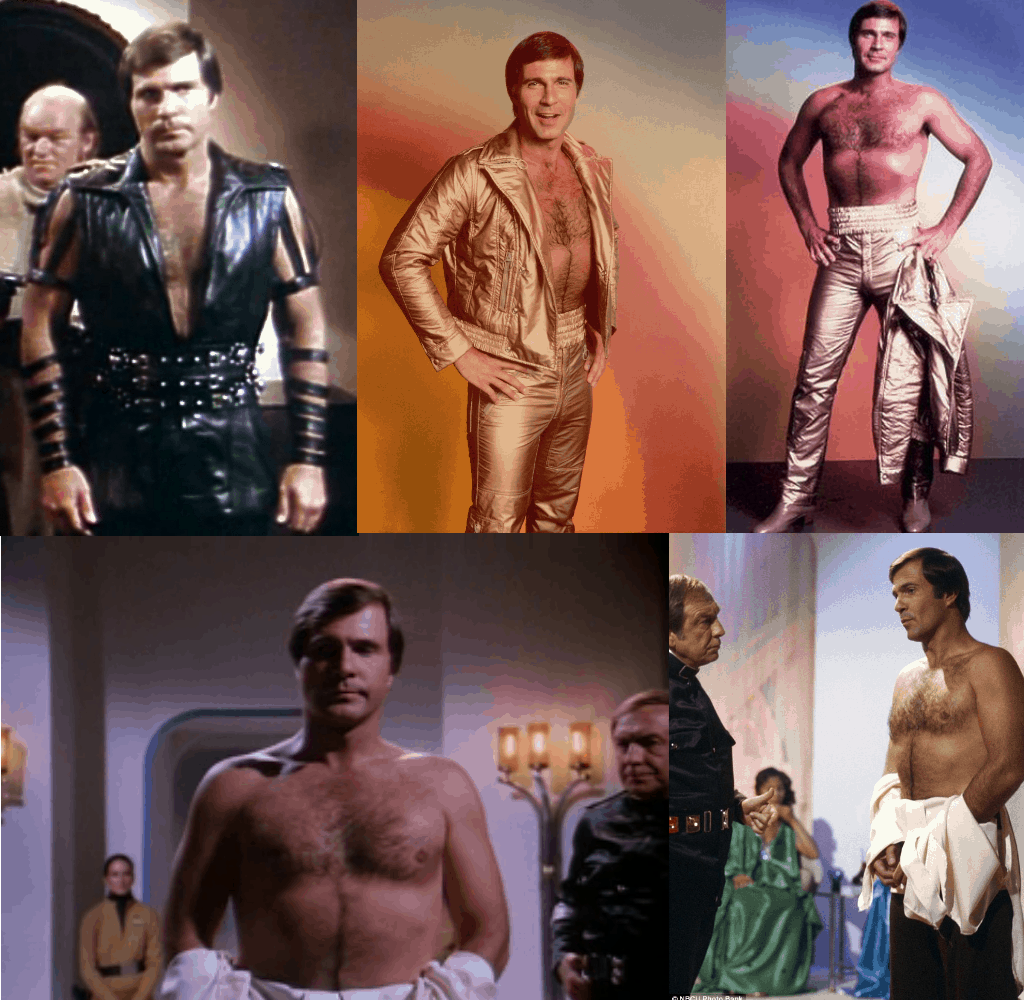 Buck Rogers in the 25th Century was panned by critics and rightly so. It wound up on several lists of “The Worst Science Fiction TV Shows Ever”. Keep in mind that this is a list that includes Manimal! They decried the campiness of the series and the viewers were not far behind…well, maybe they were because viewership was in a steady decline. But NBC wasn’t ready to give up on Buck Rogers….I mean they had all these wonderful ships and ray guns and costumes and effects they got for virtually nothing from Battlestar Galactica! So NBC ordered a second season of Buck Rogers in the 25th Century and had it go through a massive retooling. 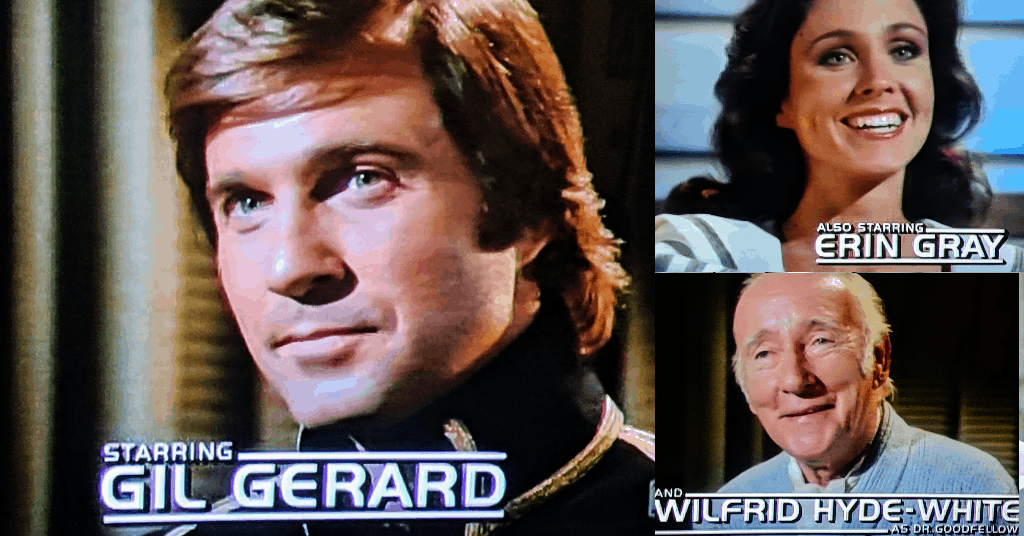 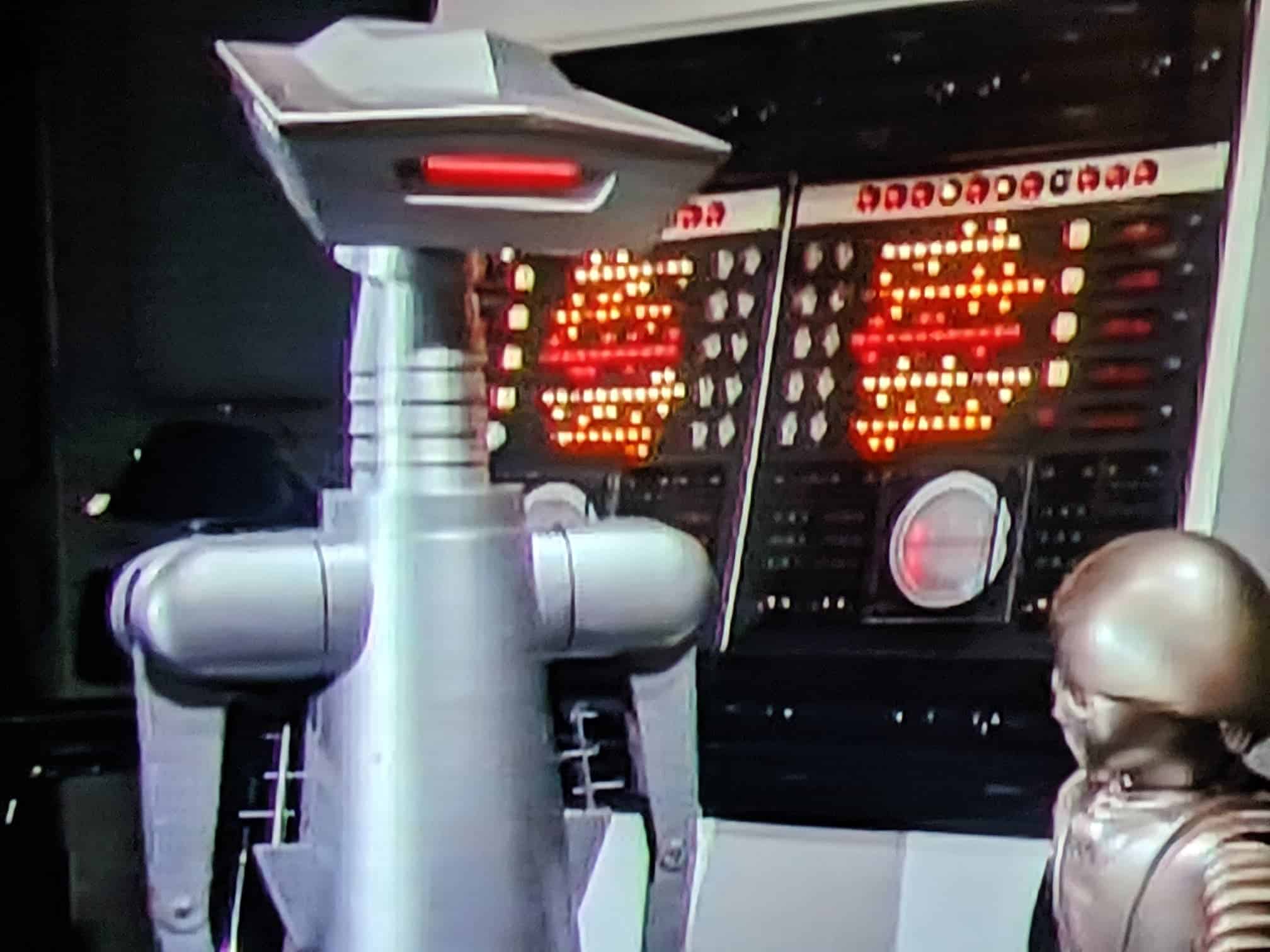 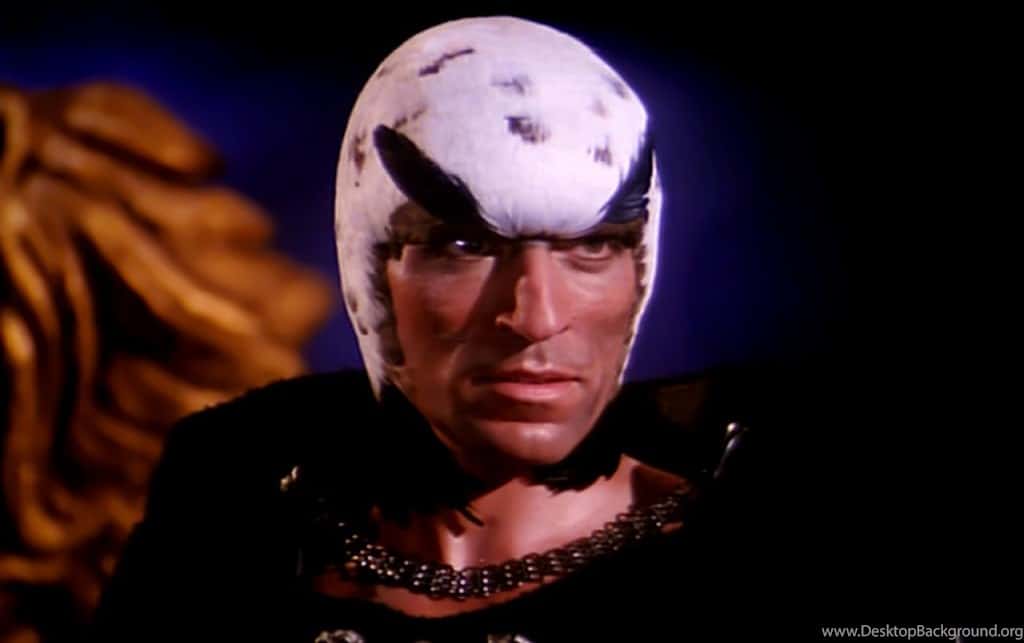 Buck, Wilma and Twiki (ugh!) were the only characters carried over to the second season which was delayed due to an actor’s strike. Buck and Wilma no longer zoomed around space in fighter ships protecting the Earth from extraterrestrial dangers. They were now stationed aboard the Searcher whose mission was to seek out the lost tribes of humanity (well, Galactica wasn’t using the plot any more!) who fled Earth after the nuclear holocaust. Also, back in those days producers loved to have one set where much of the drama could take place because it was cheaper. This is why The Incredible Hulk was so expensive and why their producers tinkered with giving him a van rather than have him hitch-hiking everywhere. The producers of Buck Rogers probably got a great deal on the last of the Battlestar Galactica sets and props at a garage sale and were able to piece together the Searcher from it. 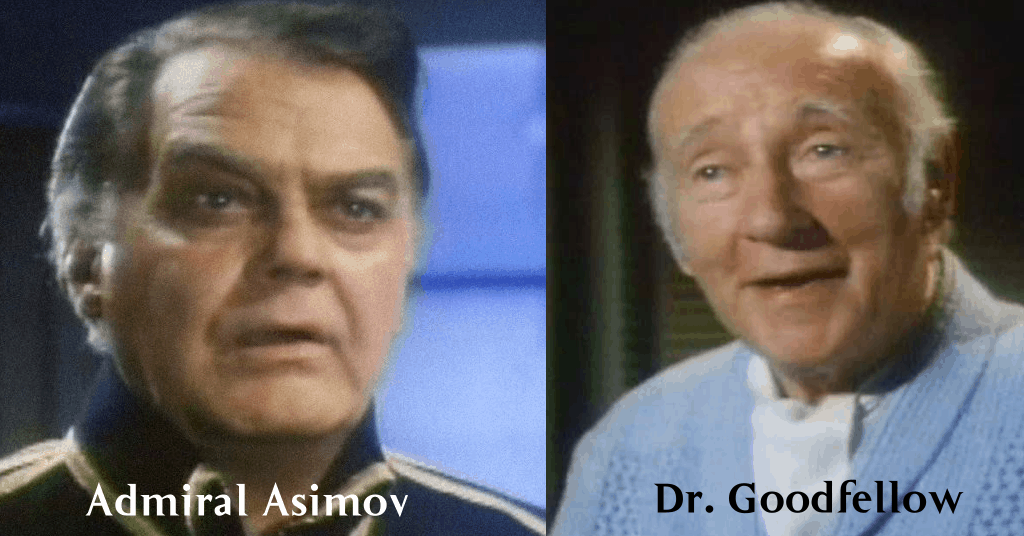 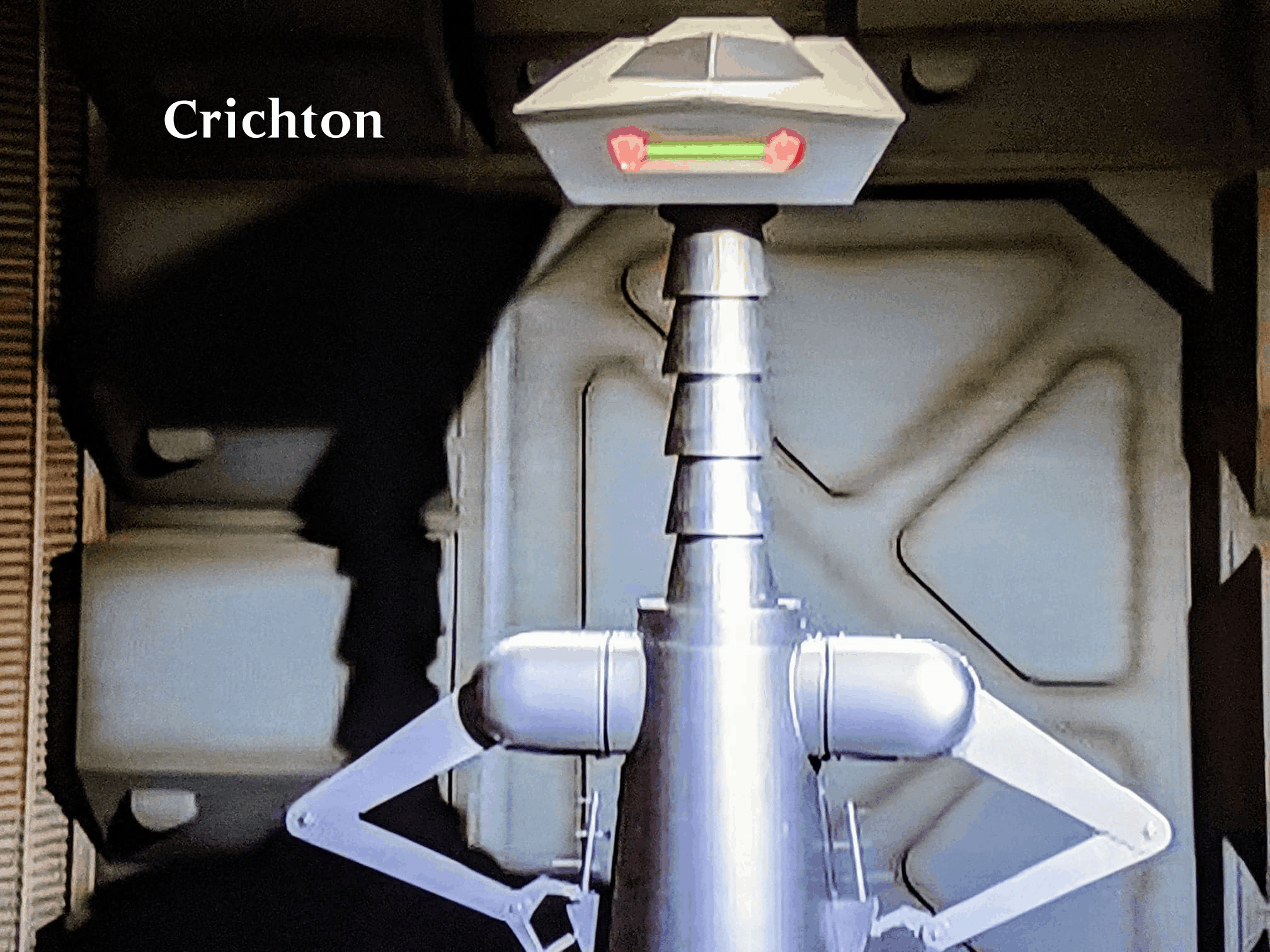 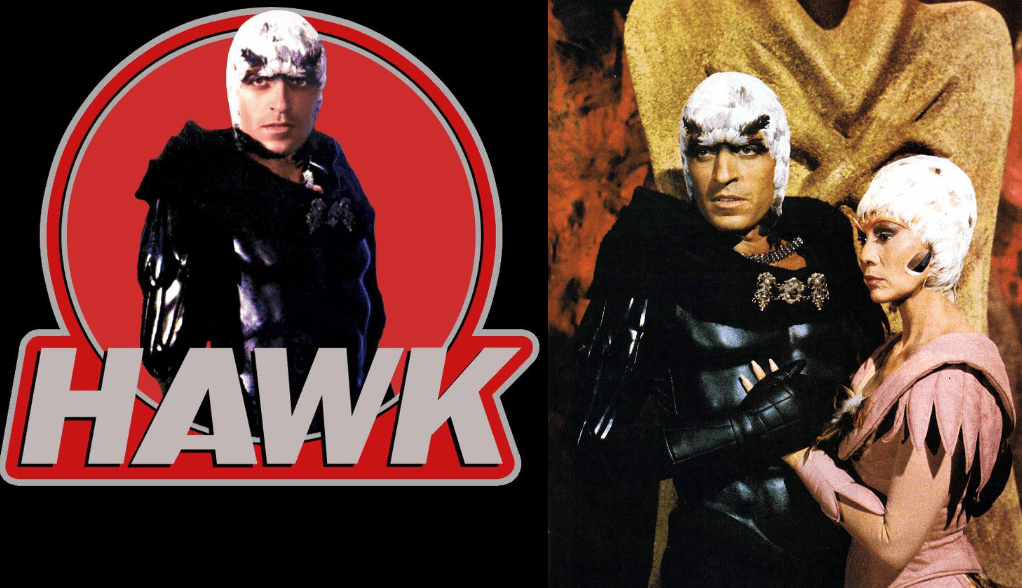 Buck got a new supporting cast which included Admiral Asimov (Jay Garner), Dr. Goodfellow (played by acclaimed actor Wilfred Hyde-White), Goodfellow’s creation, Crichton, a snobbish robot who wouldn’t accept that lowly humans could have created such perfect being as he, and finally there was Hawk (Thom Christopher) who was the last of a race of bird men. I remember really digging this guy (I even made my own feathered wig which I still own today). Hawk had an awesome space fighter which was bird shaped and had talons which would come down much like landing gear and grab hold of other ships. 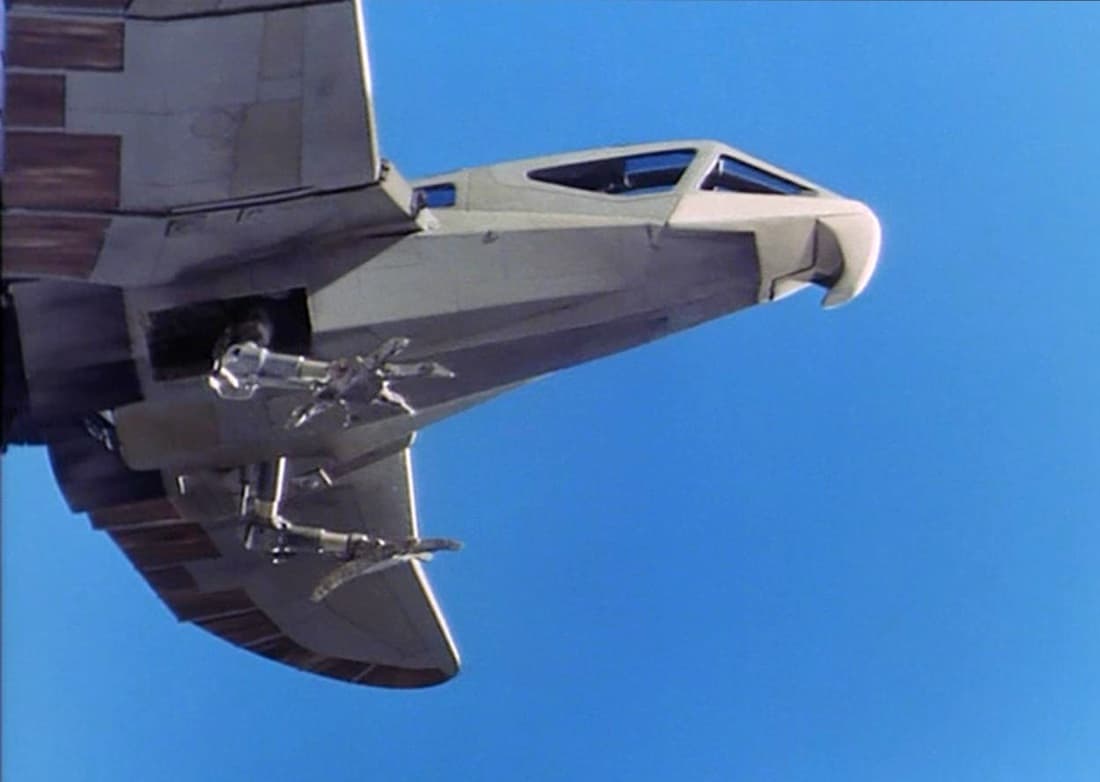 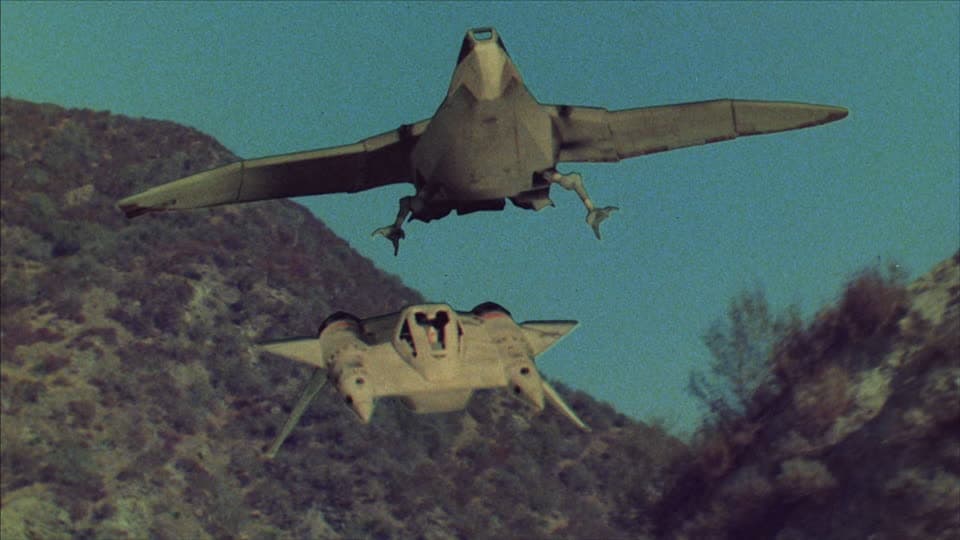 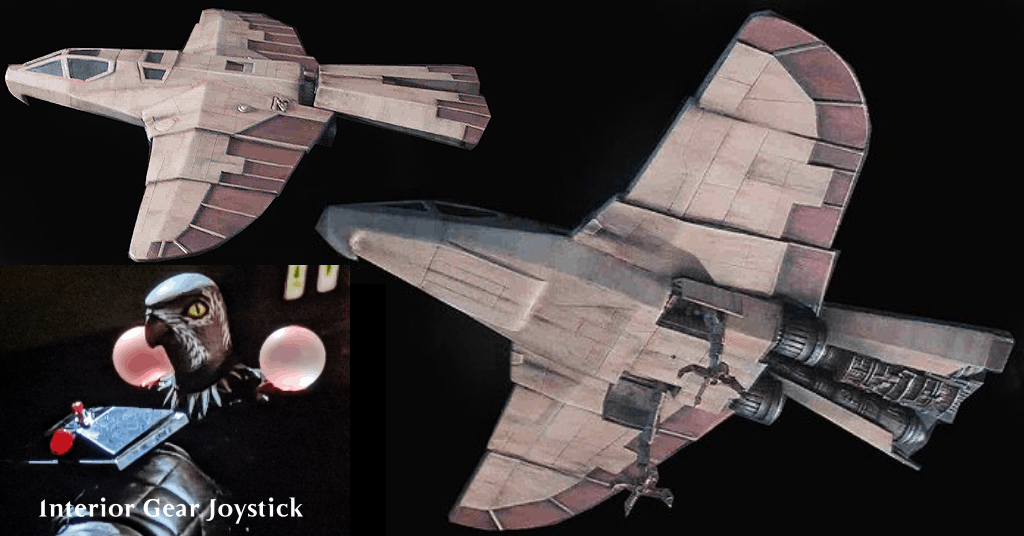 Several big actors who had appeared in roles on the 60s Batman series guest starred including Roddy McDowall, Caesar Romero, Julie Newmar and Frank Gorshin. Other guest stars of note: Jack Palance, Peter Graves, Jamie Lee Curtis, Markie Post, Sid Haig, Vera Miles, Jerry Orbach, Sam Jaffe, Lance LeGault and even the original Buck Rogers, Buster Crabbe. Gary Coleman also appeared in a couple of episodes. The tone for the second season was a little more serious as the humor was toned down from the first season. They tackled topics like racism, ecology, war, mythology and evolution. Nevertheless, the ratings for season two — perhaps in reflection of the actor’s strike — continued to spiral downward and after a shorter season of 11 episodes Buck Rogers in the 25th Century got the ax. 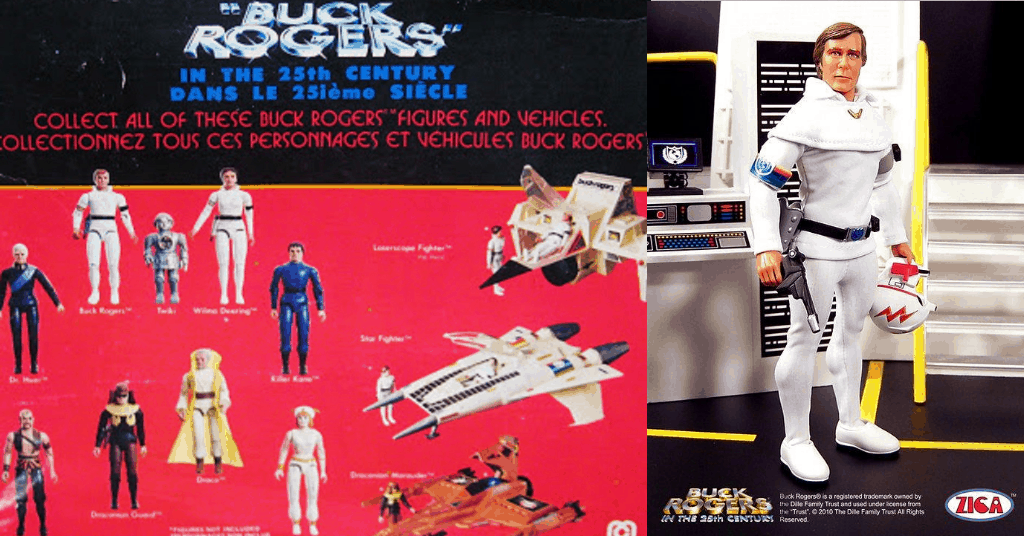 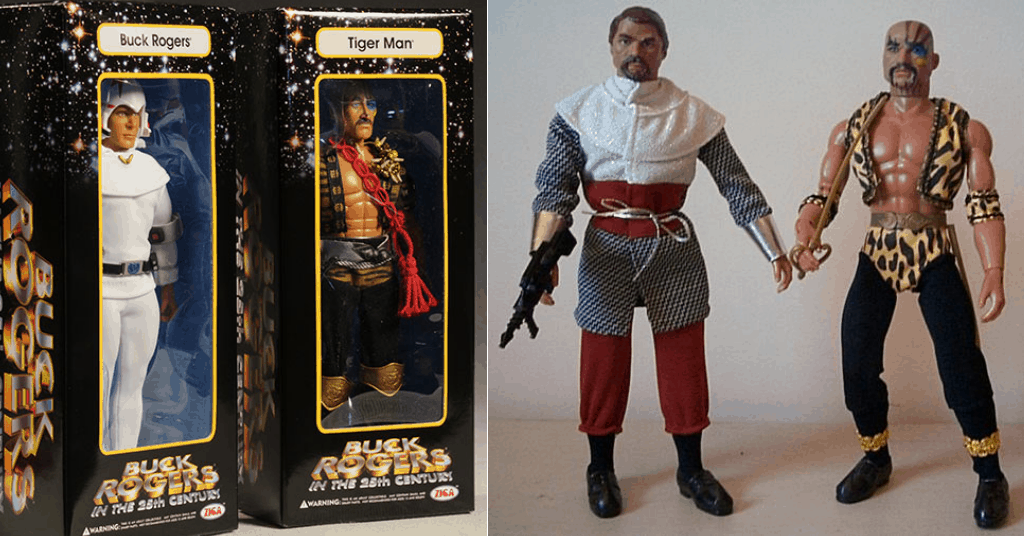 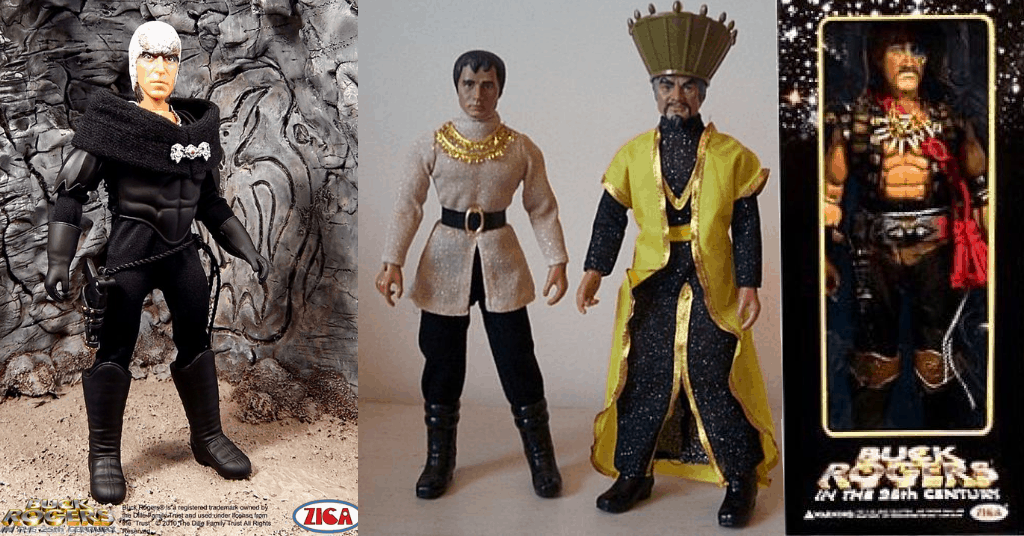 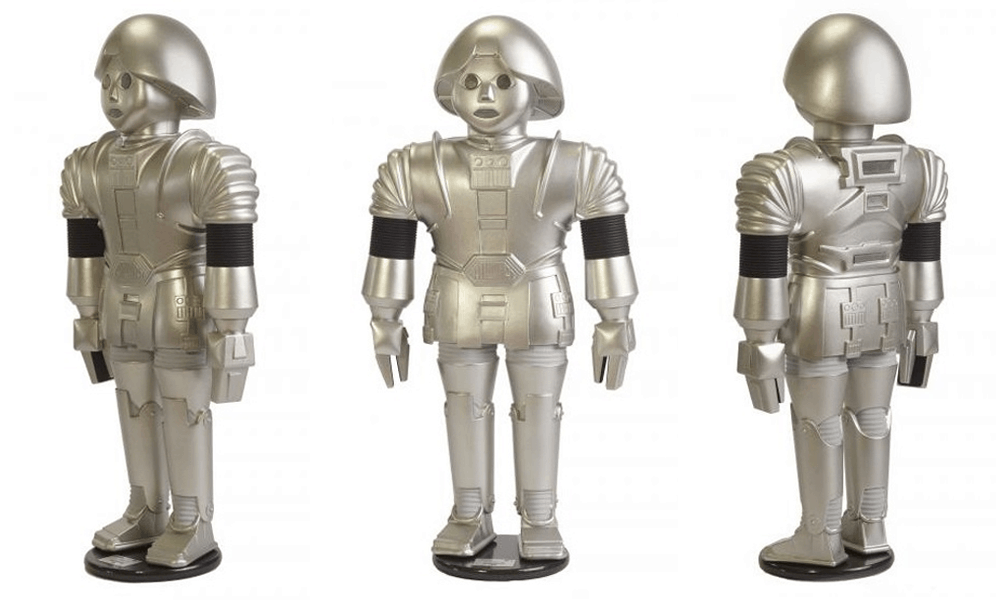 Buck Rogers got a little better merchandising deal than Battlestar Galactica. There were the ships, and Mego did a 3.75″ and 12″ line of figures. In 2011 Zica Toys produced an 8″ line of Mego style clothed figures. 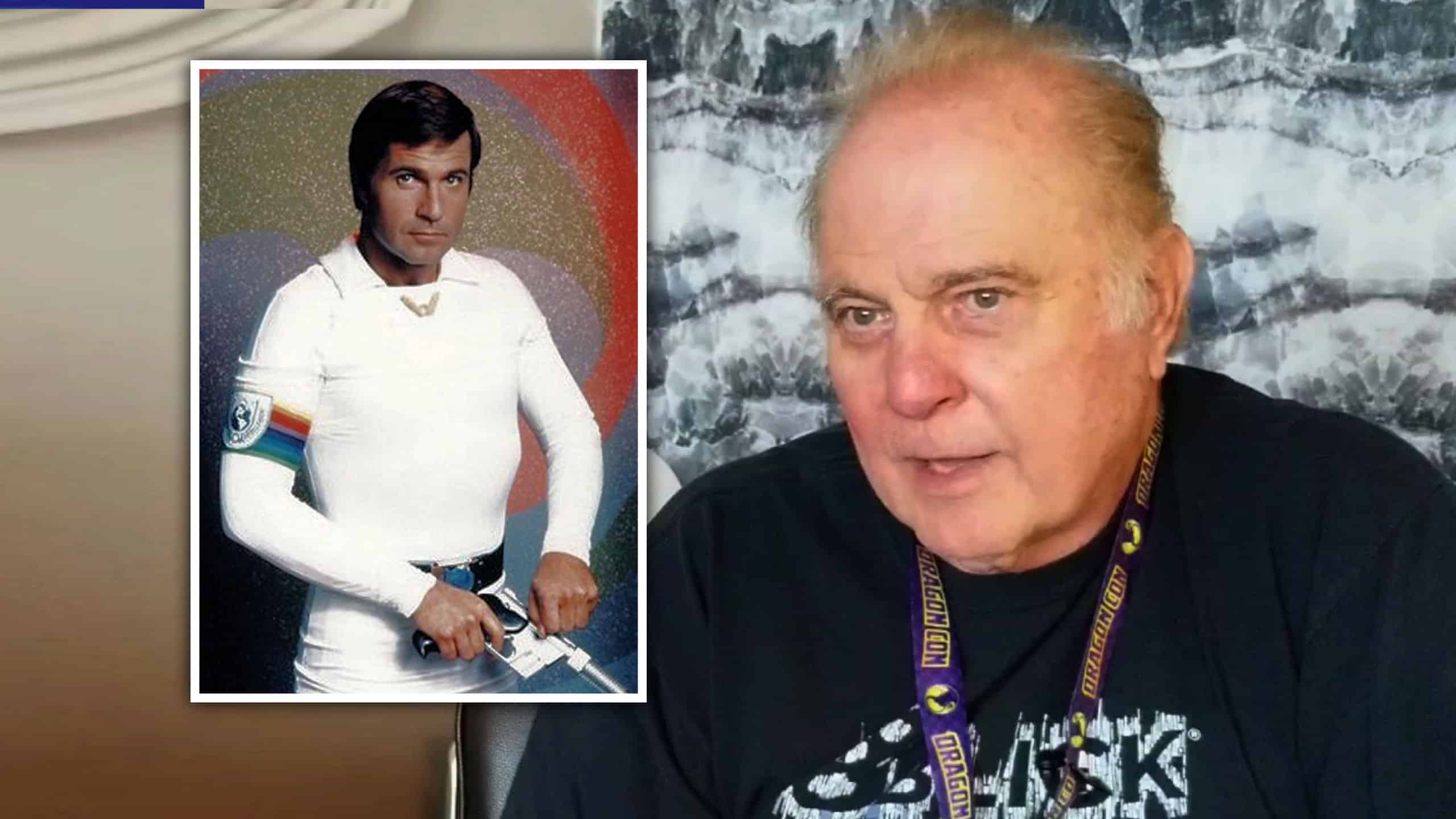 In 2014 Gil Gerard guest starred on Drop Dead Diva and has done many voice roles especially for the Transformers series. He makes occasional convention appearances. 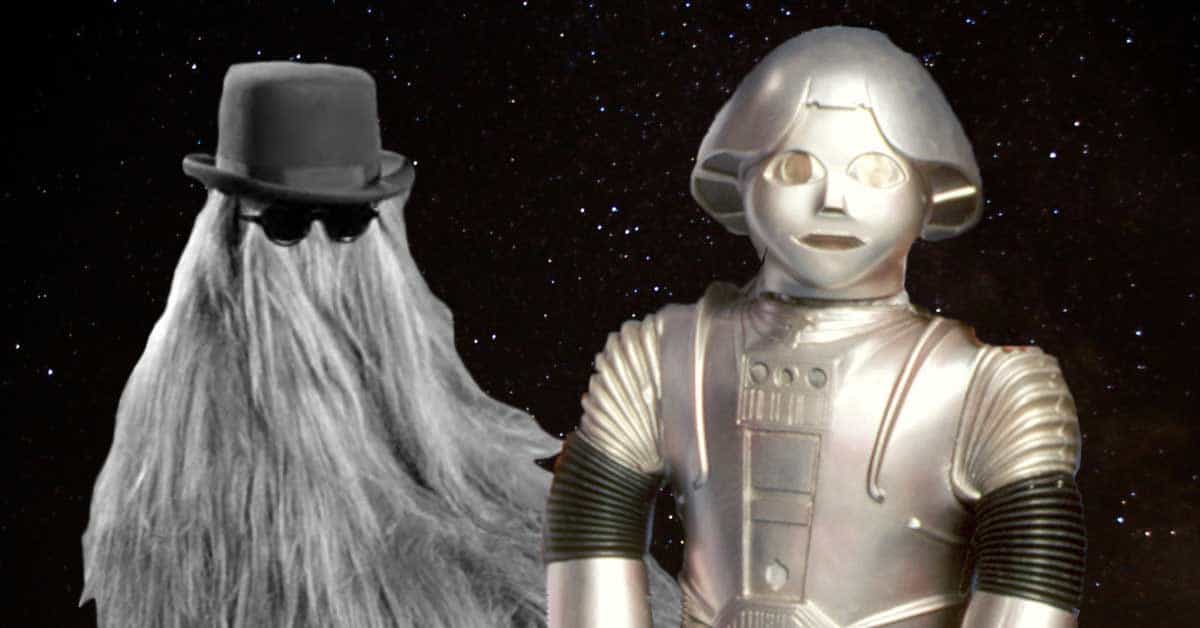 Fun Facts: Felix Silla was 3 feet 11 inches tall and was born in Rome, Italy. He married his wife, Sue, in 1965 and they had 2 children, Michael and Bonnie. While Twiki is perhaps his best known role, he also played Cousin Itt on The Addams Family series.  Felix is still alive today at a grand age of 82 years old. 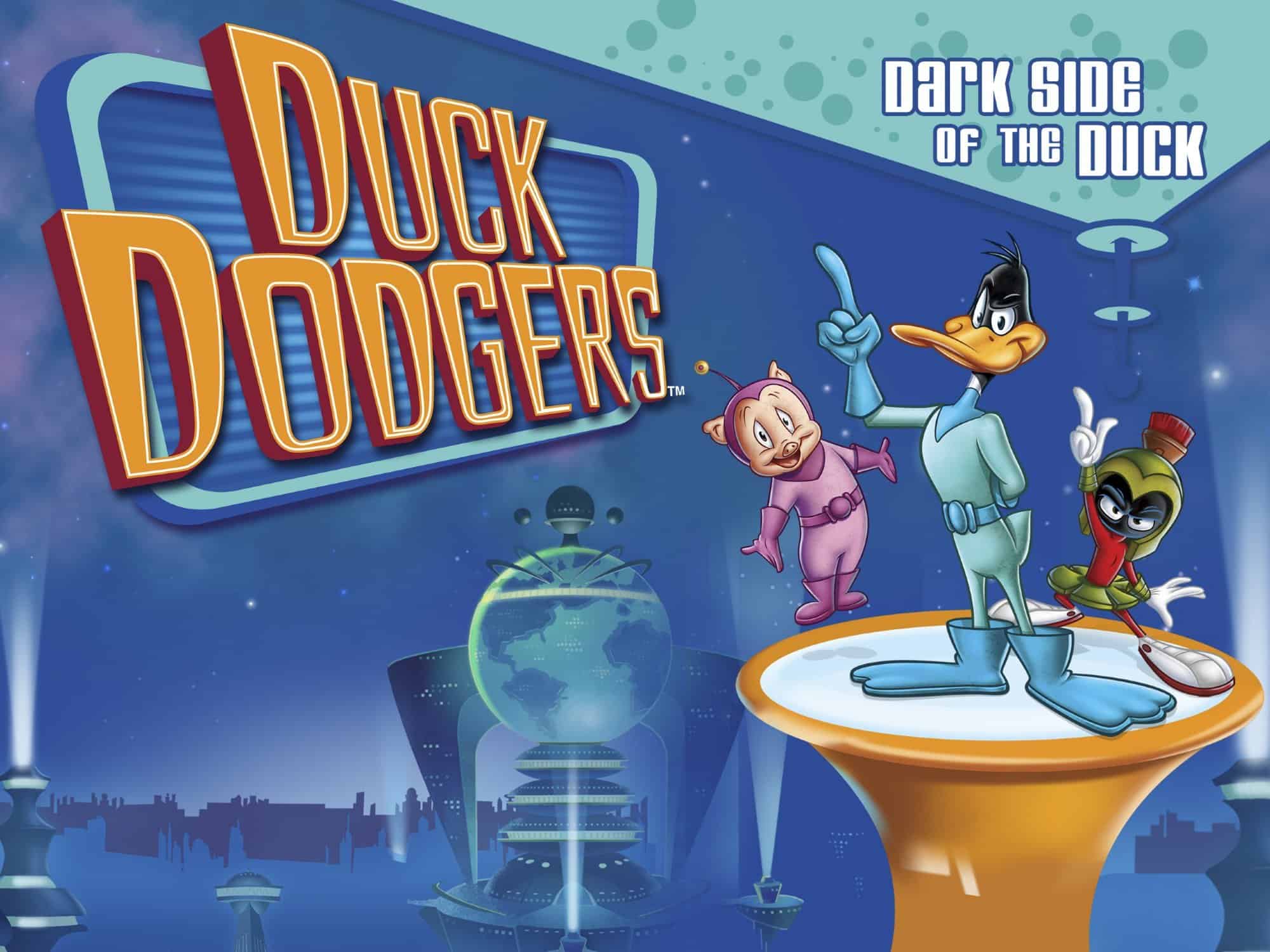 I would be remiss if I didn’t give mention to the series of Loony Toons Duck Dodgers in The 24th and a 1/2 Century starring Daffy Duck and Porky Pig often pitted against Marvin Martian. When you get spoofed by the Loony Toons bunch you know you’ve made your mark on Pop Culture and Buck Rogers certainly has done that. From comic strips to comic books to movie serials and TV series…something tells me we haven’t seen the last of Buck…not by a long shot.

Buck Rogers in the 25th Century sets off our journey through the 1980's super heroes. Coming up we'll revisit more of the heroes who paved the way for today's super heroes such as The Phoenix, Automan, Manimal, Knight Rider and many more! Until next time...Please Stand By!

Please Stand By: The Evolution of TV Super Heroes

Amazing Science Fiction: Snowpiercer: The Expansion of Emotionality
May 23, 2020

Stargirl: Dark and Gritty Traded In For Spunky Family Friendly Fun
May 21, 2020