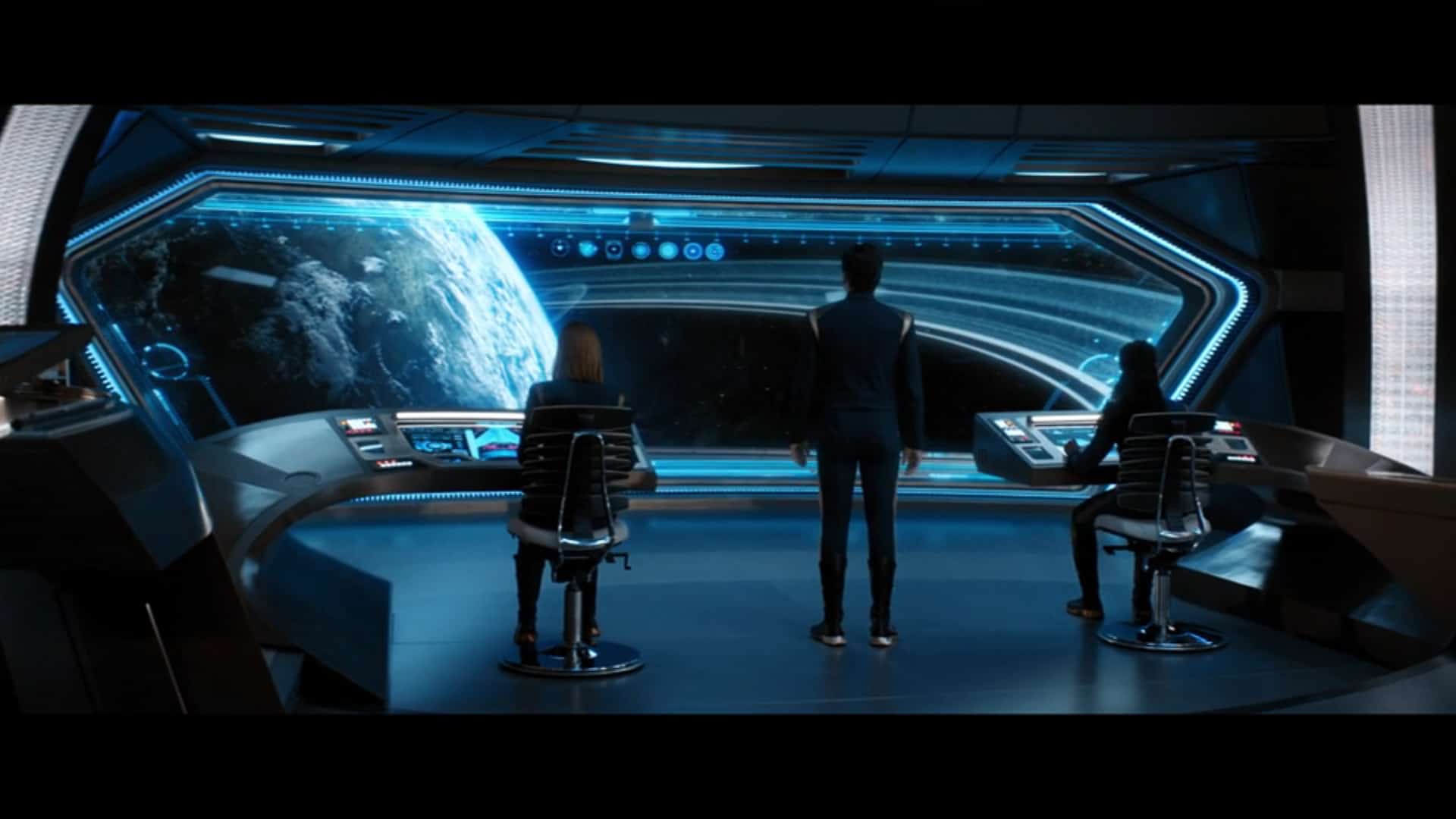 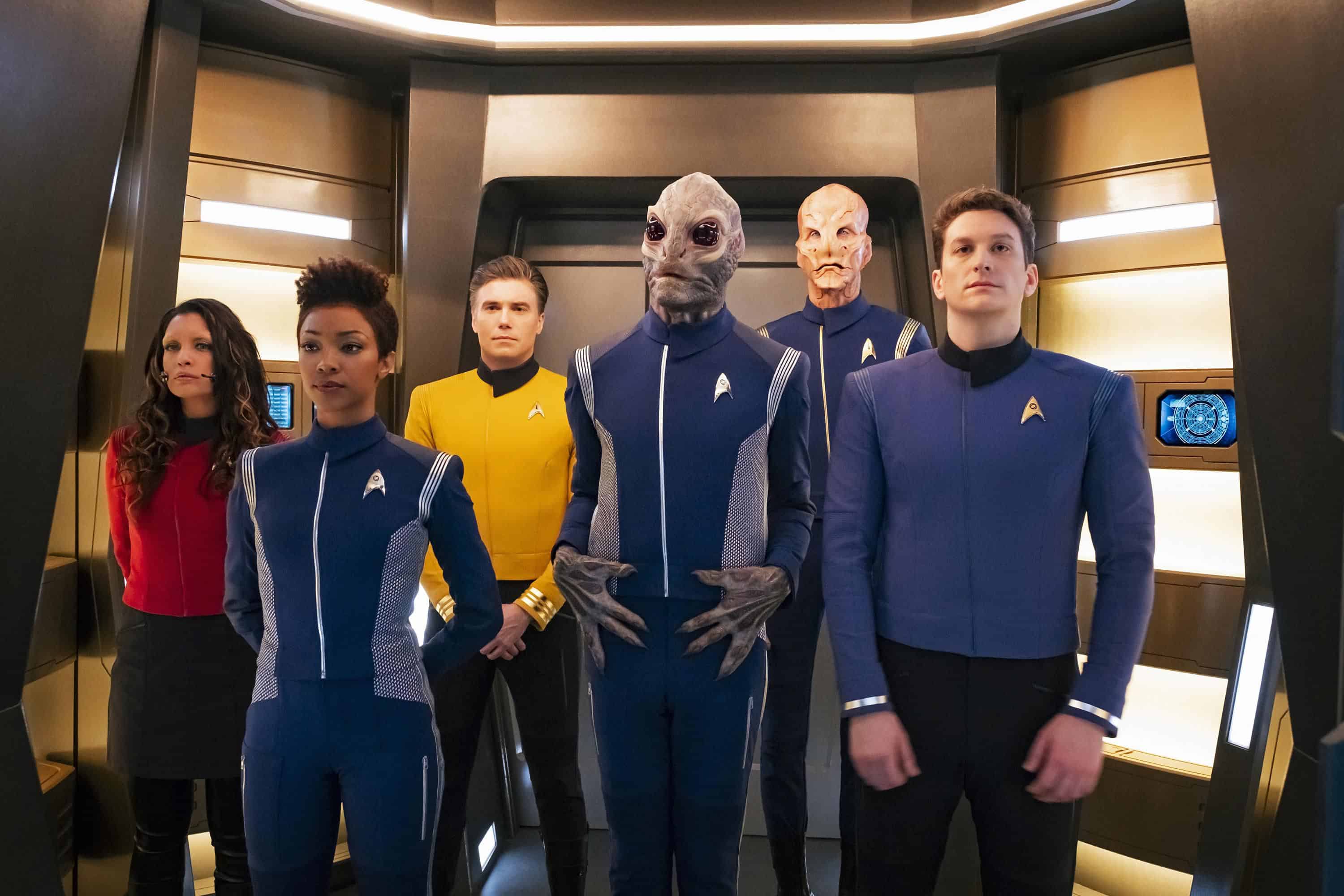 Last Time on Star Trek Discovery: while the starship Enterprise sees to some much-needed repairs, Captain Christopher Pike assumes command of the Discovery and sets off to investigate seven mysterious signals across the galaxy. They come upon the USS Hiawatha which has been trapped in a strange asteroid cluster. The Away Team rescues Jett Reno and the remaining crew. Michael Burnham has a vision of a red angel before escaping on the Discovery with a large sample of the asteroid. Michael learns her foster brother, Spock, is not aboard the Enterprise.

Episode 2 "New Eden": While investigating Spock's quarters, Pike and Burnham discover Spock was already onto the signals. Stamets confides to Tilly that while he was trapped in the network he saw his partner Hugh...after his death. It was the love the two men shared that allowed Hugh to guide the Discovery out of the mirror universe. Tilly has found a way to pinpoint one of the signals but it will require Stamets and the spore drive which causes Stamets to question if he might not want to leave the network if he finds Hugh there again.

As Captain Pike tries to hold his lunch down, Saru tells him "You never forget your first time, sir." After scanning for the distress signal they picked up, the Discovery finds what appears to be an Earth-style village complete with a church. Further scans reveal no warp signature and starships near the planet and most puzzling...the signal has been on a loop for 200 years...before warp science existed.

Determining that the colony of 11,000 on the planet is pre-warp and, aside from the distress beacon, no electricity can be found...it's decided Star Fleet General Order 1 applies.

Speculating that the asteroid chunk they secured may offer a viable non-human interface alternative for the spore drive due to its metreon charged dark matter, Tilly acquires a small fragment weighing over a ton! However, as Tilly admires the space rock, an energy discharge from it knocks her out. 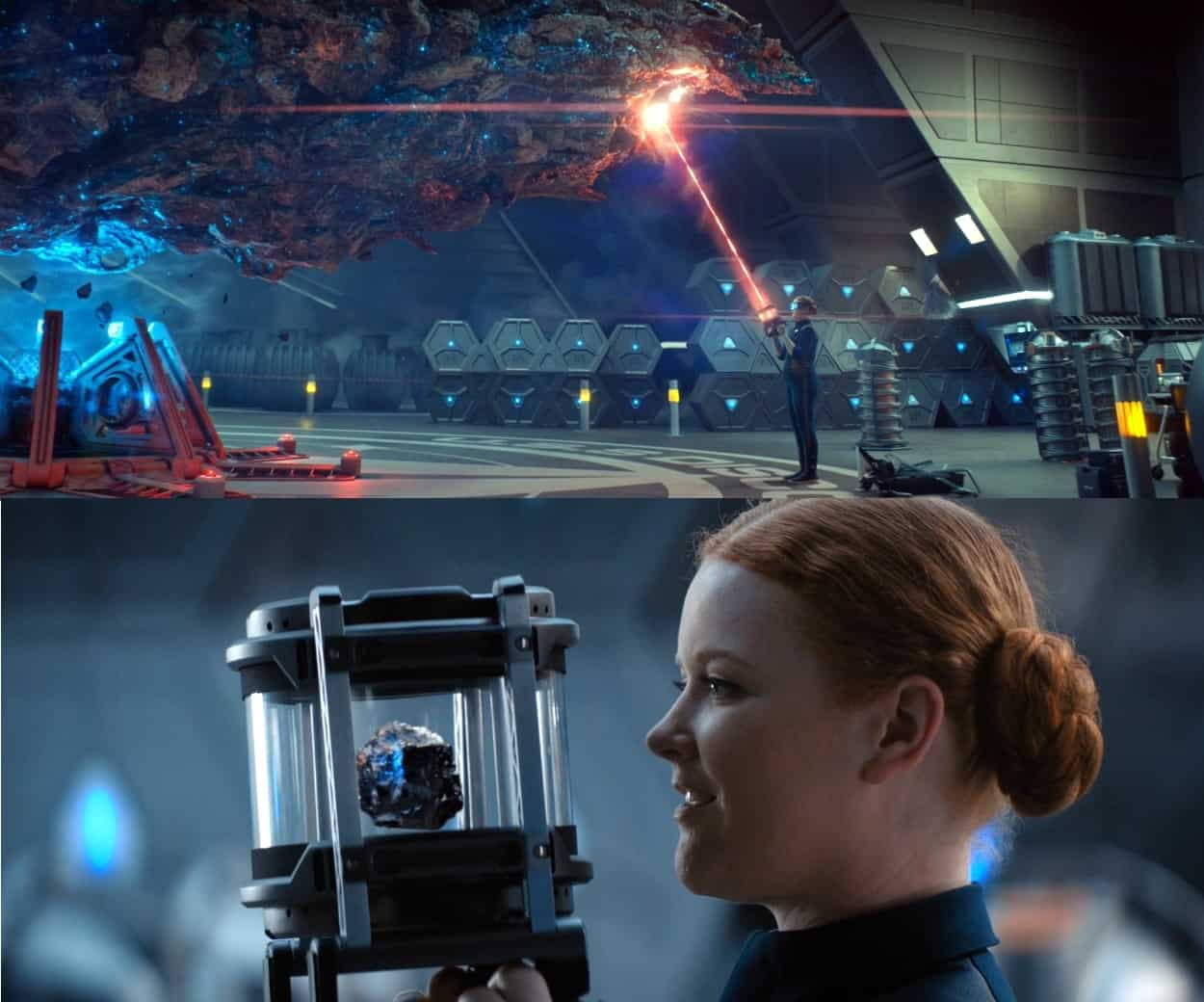 Pike, Burnham, and Lt. Owosekun transport to the village and enter the church where the distress signal is emanating from. Pike asks Michael and the Lieutenant if they had ever been in a church. Owosekun says her family were non-believers and Michael states she is familiar with the texts of Earth's religions. She also determines the stained glass window portraying Jesus also contains references to Judaism, Islam, Hinduism, Buddhism, Shinto and Wicca. The people on the planet have cobbled together a religion based on the primary faiths of Earth. Pike mentions the purpose of the stained glass windows were to teach the gospel to those who couldn't read.

A man enters the church and Pike tells him they are "from the north". The man, Jacob, says the All-Mother will want to see them. Later, in a very religious ceremony, the Away Team is welcomed to "New Eden". It is also learned that the "first saved -- soldiers and civilians -- sought shelter on Earth in a white church as bombs fell from the sky during World War III in 2053". But before the bombs exploded, an angel surrounded by pillars of flames appeared and "delivered the church, and those within, here to Terralysium".

Back on the Discovery, Tilly wakes up in sickbay with the crewman May, who presumably saved her, standing by her bed. On the Bridge, Saru and the other officers make a shocking discovery that radioactive particles from the planet's outer ring will kill everyone on the planet in 62 minutes. On Terralysium, the Away Team's secret is discovered by Jacob whose family had kept the church beacon going till the power went out.

Michael and Captain Pike clash when Pike tells her they will follow the rules of General Order 1 and leave the planet once the distress beacon is turned off so no one else will come along and find it. Before Michael can argue her point much further, Captain Pike is critically injured and the away team is forced to return to the Discovery. Later though, Captain Pike returns to New Eden and gives a battery to Jacob in exchange for a broken helmet cam from the first soldiers who came to Terralysium. 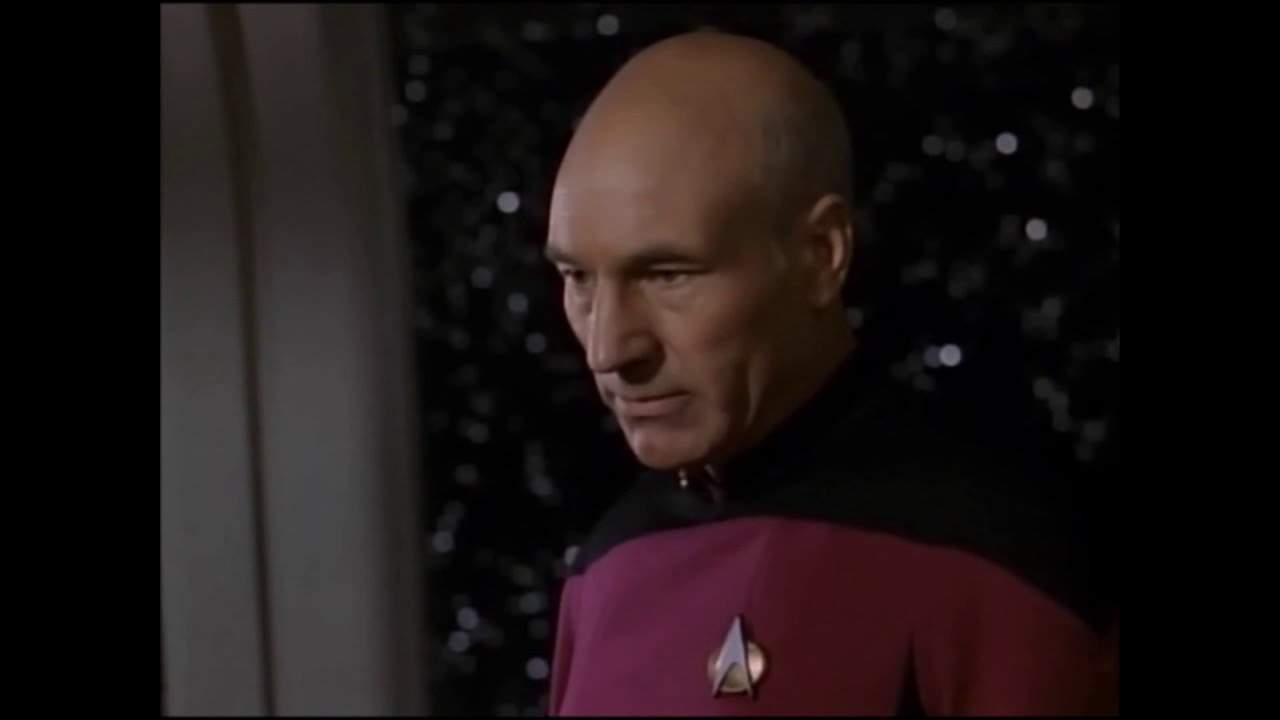 It is no secret that Star Trek creator Gene Roddenberry had an extreme distaste for religion. He felt that the human race, the more advanced it became, would outgrow the need for such superstition. In the Next Generation episode “Who Watches The Watchers?”, Captain Jean-Luc Picard says the following: “Horrifying…Dr. Barron, your report describes how rational these people are. Millennia ago, they abandoned their belief in the supernatural. Now you are asking to send them back into the dark ages of superstition and ignorance and fear? No!”

The religious beliefs or lack thereof, of Star Fleet personnel from Earth, is not brought up much that I can recall (although I remember Kirk making some remark to “God” in Star Trek V: The Final Frontier that their one god was enough). But I get a strong vibe that this Captain Pike is a man of faith, probably Christian. Time will tell if this bears out.

After Gene Roddenberry’s death, writers started to slip religion more often, at least where other planets are concerned. And I think it was to our benefit. Think of the Bajorans…Star Trek Deep Space 9 is predicated around this planet that worships “prophets” from a nearby wormhole. And the Klingons….their richly fleshed out culture is full of faith-based references. But while Star Trek fans have accepted these premises, fans of both Battlestar Galactica and Lost had a total fit over the series finales of both shows. Which is strange because Battlestar Galactica had religion running throughout the series…the multi-theistic beliefs of the humans vs “the one true God” of the Cylons, a race of robotics. Now that’s irony. In Lost, science vs faith was a running theme of the show. But many viewers took the epilogue of an “afterlife” to mean the whole show was set in purgatory which was not true and they stated many times that “everything that happened, happened”. Personally, I find that faith-based plots are fair game but when it reaches a level of being preachy that’s where I draw the line. I watch shows to be entertained, not converted.

What I find disturbing in this episode is Pike’s willingness to leave these people from Earth stranded on this planet. Yes, it is 200 years since their ancestors were brought there against their will but they were originally victims of a kidnapping you could argue. Had the Red Angel not removed the soldiers they might well have died and these descendants would never have been. Or maybe they would have lived on Earth through the “Age of Warp Drive”. I’m going to have to side with Michael Burnham on this. I think in the very least the colonists should have been offered the choice of returning home. Maybe they would have chosen to stay on Terralysium or maybe some would have returned to Earth. I don’t feel they should have been treated like an extraterrestrial culture…one in which I would fully support the Captain’s decision. I’m also curious as to when “General Order 1” will become “The Prime Directive” and what, if any, differences there might be. Maybe in the future of Discovery (before TOS) there might be some provision that would allow for the rescue of the Terralysium colony.
Before I close hailing frequencies, I want to address something from my review of episode 201 “Brother”…apparently some people were offended by my abbreviation of Star Trek Discovery as “STD”. Honestly, I did not see the connection to “sexually transmitted disease” until it was brought to my attention. In the future, I shall endeavor not to use this abbreviation but I wanted to point out that a portion of my review was about not taking things so seriously. While I feel just as protective of the Star Trek legacy as most of you, I would say if you read another review by someone and they use this abbreviation, just laugh it off. There are far more serious things that need attention….like, why are there so damn many lens flares? Did Discovery pick up an STD (Starship Transmitted Disease) from the JJ Abrams films?  The notion is, well, fascinating.

Star Trek: Discovery continues to deliver excellent content that is timely and relevant but still harkens towards the classic feel of the franchise

Star Trek: Discovery continues to deliver excellent content that is timely and relevant but still harkens towards the classic feel of the franchise