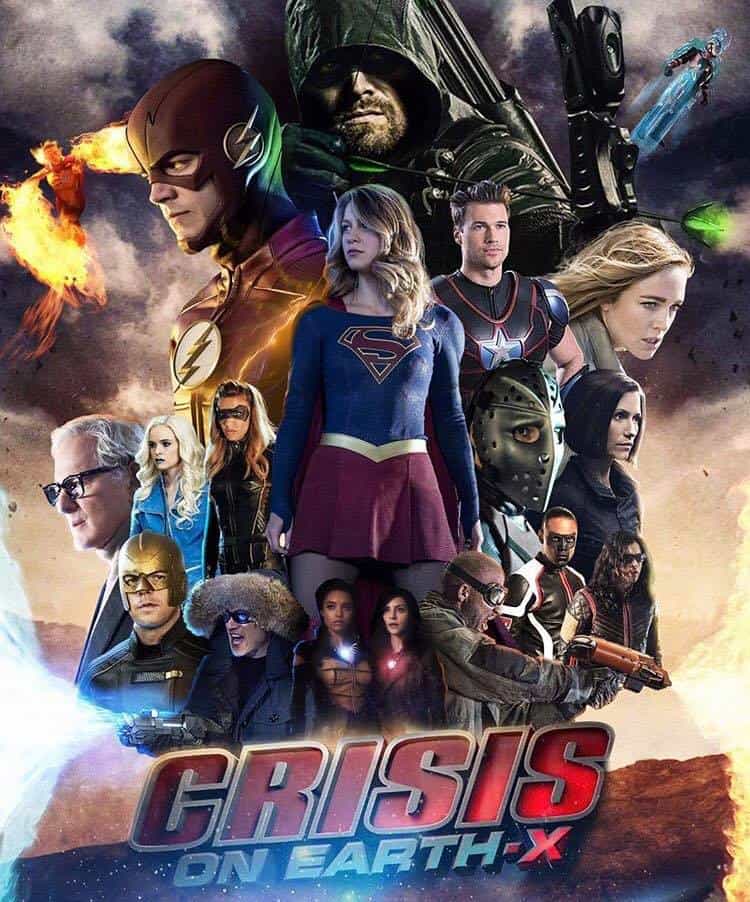 Trapped on an alternate Earth, the heroes must find a way back home or die trying.

This episode is the third part of a 4-part cross-over called “Crisis on Earth-X”, which takes place between the CW Network television series Supergirl, Arrow, The Flash and Legends of Tomorrow. Because of this, there are scores of characters involved and several individual show storylines referenced. 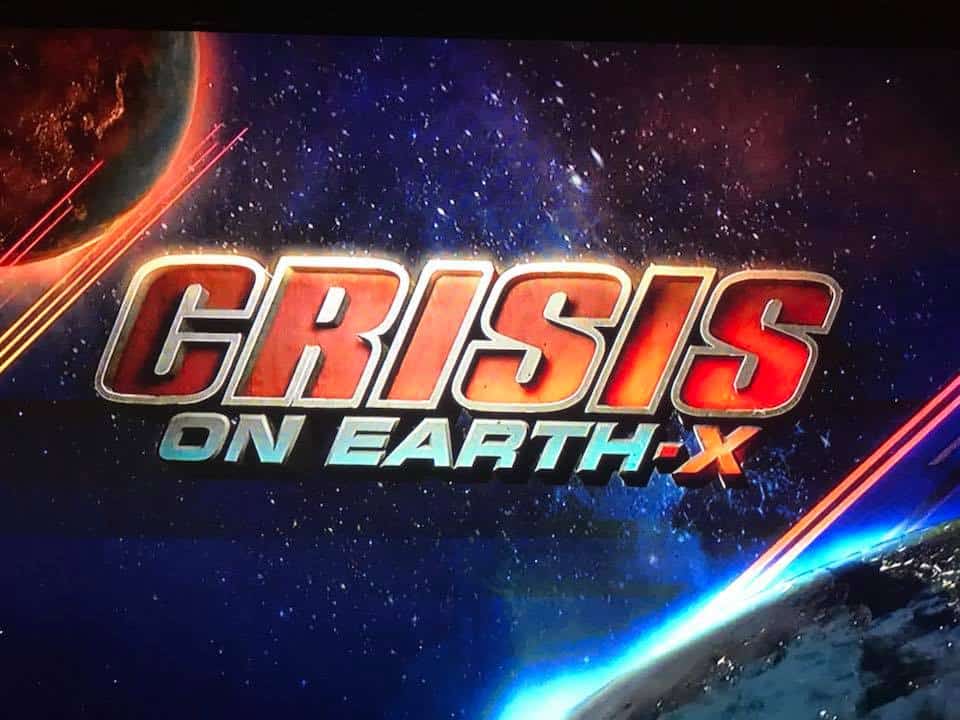 When Barry Allan (aka The Flash) is about to marry his longtime love Iris West, the wedding is crashed by evil Nazis. Fortunately for them, the majority of the persons attending the wedding are friends with superpowers. They manage to hold off the Nazis, but it is revealed that the Nazis are from an alternate Earth were Nazis won World World II. The leaders of the Nazi party are evil versions of Oliver Queen (aka Arrow) and Kara Zor-El (aka Supergirl) who are married, and Prof. Eobard Thawne (aka Reverse-Flash). They want to capture our world’s Supergirl so that they can transfer her healthy heart into her evil counterpart as hers is weakened by too much solar absorption.

When the Nazis return, it is with additional powered beings such as Metallo, an evil robot powered by Kryptonite. They are able to defeat the heroes, taking The Flash, Arrow, White Canary, Firestorm, and Supergirl’s adoptive sister Alex Danvers to a concentration camp on Earth-X while the remainder of the heroes are locked in meta-human prison cells at Star Labs and Supergirl is being prepped for surgery.

Trapped in the Earth-X Auschwitz concentration camp, the heroes see that the words above the gate say, “Arbeit Macht Frei” which translates to “Work Sets You Free”. There are power inhibitor collars around their necks as well. They notice other prisoners there, most of whom have either stars on their prison uniforms or pink triangles. When Jefferson Jackson, who is one half of the Firestorm persona, asks a prisoner what the pink triangle means, the prisoner answers, “I loved the wrong person”. Sara Lance (aka The White Canary) notices a high ranking Nazi official approaching and is shocked to see that it is an alternate version of her father Quentin Lance. He tells her that she looks a lot like his daughter, and asks why is she helping the enemy. She answers that she loves both men and women. Disgusted, the evil Quentin tells her that his world’s daughter felt the same way, so he had her killed. He demands the new Earth-1 arrivals and a prisoner with a pink triangle march to an open field just outside the Auschwitz walls. When they attempt to escape, Quentin presses a button and they all fall to the ground due to electrocution. Seeing that they are powerless to escape, the group sees a large trench. They line up beside it and are about to be shot by the Nazis to fall into it dead when Leo Snart (aka Citizen Cold) appears and uses his freeze gun on the Nazis. The heroes take the opportunity to find safety in the trench from newly arriving Nazi soldiers. Leo takes the collar off of the pink triangle prisoner and tells the others to close their eyes. The prisoner is then revealed to be Ray Terrill (aka The Ray). He rises into the air and blasts the remaining Nazis with light. The heroes are then able to escape the camp completely and go to Leo and Ray’s secret rebel base.

Waking to find themselves at Star Labs and locked in meta-human jail cells, Cisco (aka Vibe), Black Canary, Caitlin Snow (aka Killer Frost) and Dr. Harry Wells try to escape but to no avail. Still free and roaming, Iris West and Felicity Smoak look for a way to get them free. Kara (aka Supergirl) is strapped to a hospital bed and positioned under a red sunlight. This weakens her to the point her body is able to undergo the heart transplant operation. Her evil counterpart and Prof. Eobard Thawne taunt her about how weak she is and how she will be giving up her life so that the Nazis can reign supreme. 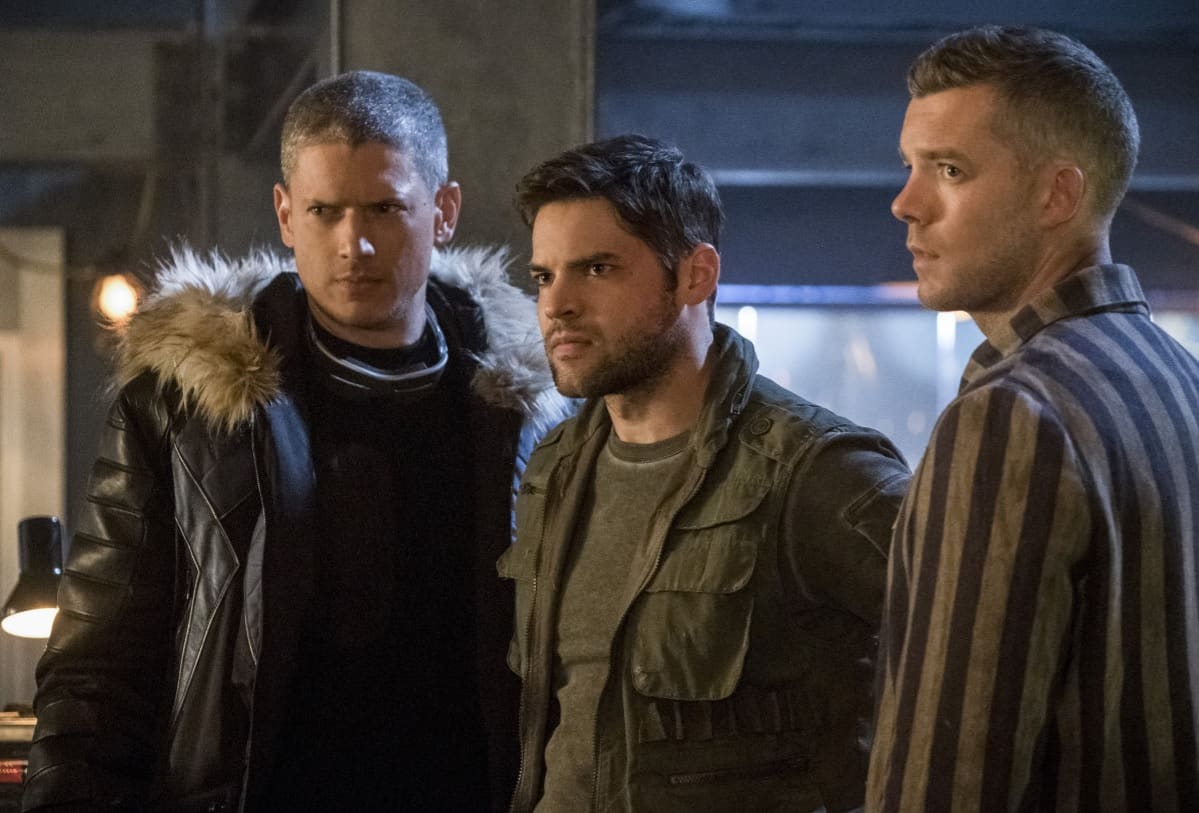 At the Earth-X rebel headquarters, the heroes learn that their leader is a grizzled version of Winn Schott, whom they refer to as Freedom Fighter General Schott. When they tell him that they are from Earth-1, The Ray admits that he is from Earth-1 as well, and that he arrived on Earth-X via a dimensional portal that the Nazis currently control. They ask Winn to let them try to access the portal so that they can get home again. Winn says no, stating that it is a dangerous doom’s day weapon the Nazis plan to use and that he means to destroy it. Alex tries to reason with him, telling him that in her world that she and Winn are very close, and that there isn’t anything he wouldn’t do to save her or her sister. Winn tells her that the Winn she knows isn’t him and that he still means to destroy the portal. Distraught, White Canary tells Alex that she lost her sister in her world and that she will do everything she can to make sure that Alex doesn’t lose hers as well. Sympathizing with them as well, Citizen Cold convinces The Ray to talk to Winn and give them one hour to try to return their new friends to their home. It is here that we learn that Citizen Cold and The Ray are a couple.

Just before Thawne is about to cut into Supergirl, Iris and Felicity manage to turn off the power to Star Labs. They grab Supergirl during the chaos and try to escape, but are stopped by Metallo. Metallo returns the trio to Thawne, who threatens to kill Felicity if she doesn’t provide the access code to return the power back to Star Labs.

Disguising himself as his evil counterpart, Arrow infiltrates the facility containing the portal back to Earth-1. Quentin is unsure if he is the Nazi Arrow so he has soldiers bring in a Jewish prisoner. Arrow is shocked to discover that it is an alternate version of Felicity. Quentin gives Arrow a gun and tells him to kill her. Arrow instead tries to shoot Quentin, but the gun doesn’t have any bullets in it. Arrow fights his way out of the room, finally giving the prisoner Felicity a gun, telling her to use it for protection. Firestorm, The Flash, White Canary, Citizen Cold, The Ray, and Alex Danvers then show up and attempt to turn on the portal. Martin Stein, who is one half of Firestorm, gets shot and killed while his counterpart Jefferson watches. 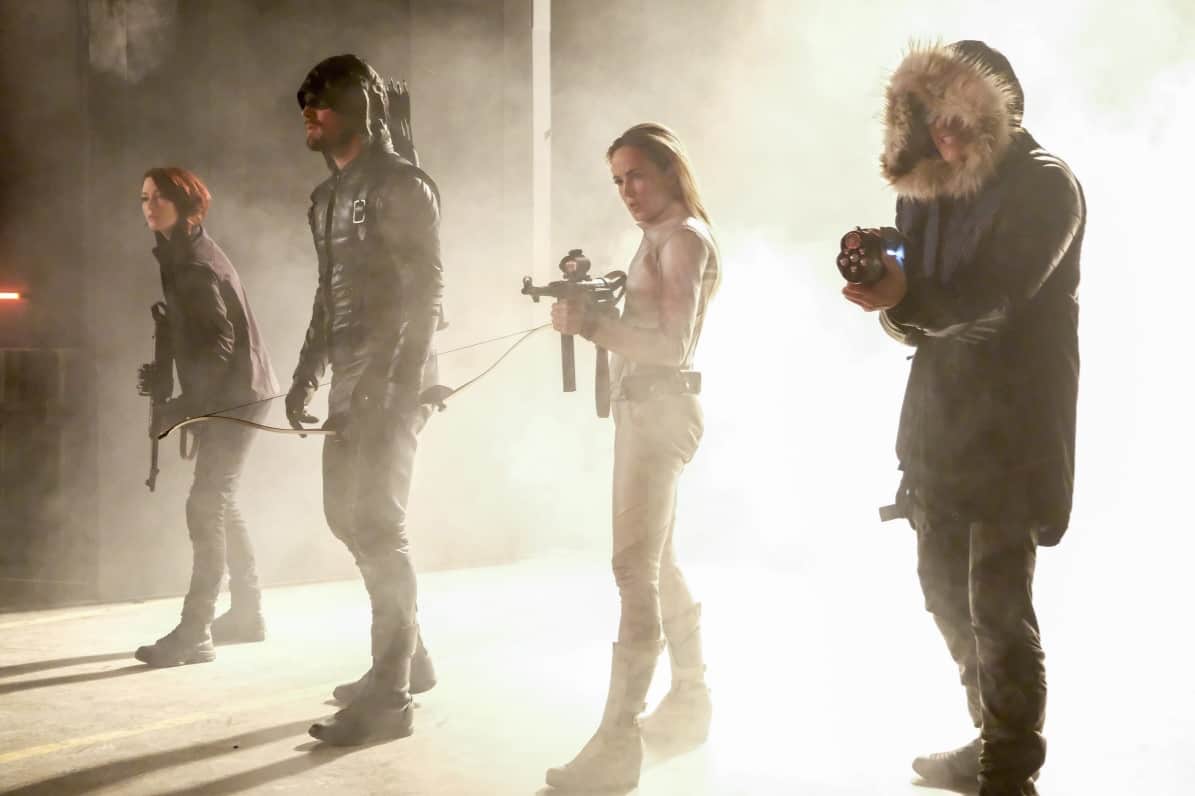 Discovering that Winn shortened the time given to them, The Flash and The Ray try to stop the weapon he has sent to the facility to destroy the portal: Red Tornado. 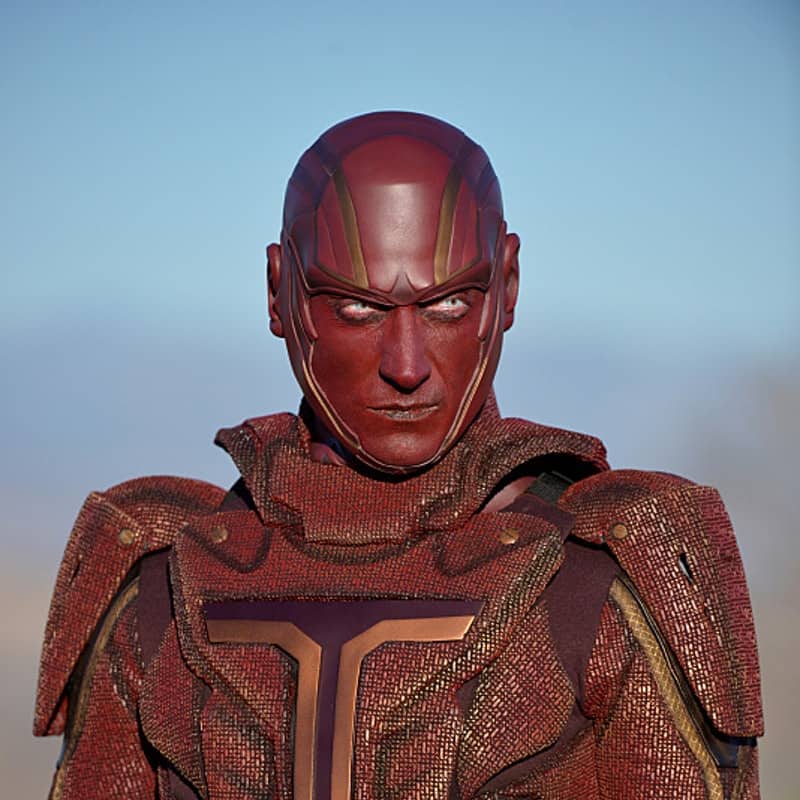 What Does This Mean for the Future?

Supergirl is close to losing her heart again, though this time literally, and the rest of the heroes are about to be killed by the powerful android who creates tornadoes, Red Tornado. Things are not good for the future of our heroes, to say the least.

Final Thought: Somehow the heroes manage to find themselves in even hotter water than before. Still, through the darkness, there were a few Rays of light (pun intended) seeping through. The first one is discovering that The Ray is not only from Earth-1 like our heroes, but also romantically tied to Citizen Cold. Their kiss was a total whoa moment for fans to see.

This was just as fun a pairing as the producers putting Sara and Alex together for a one night stand. Further showing that The CW is an all-inclusive network who strive to show equality for all of their characters. A tip of the hat to them in that regard. 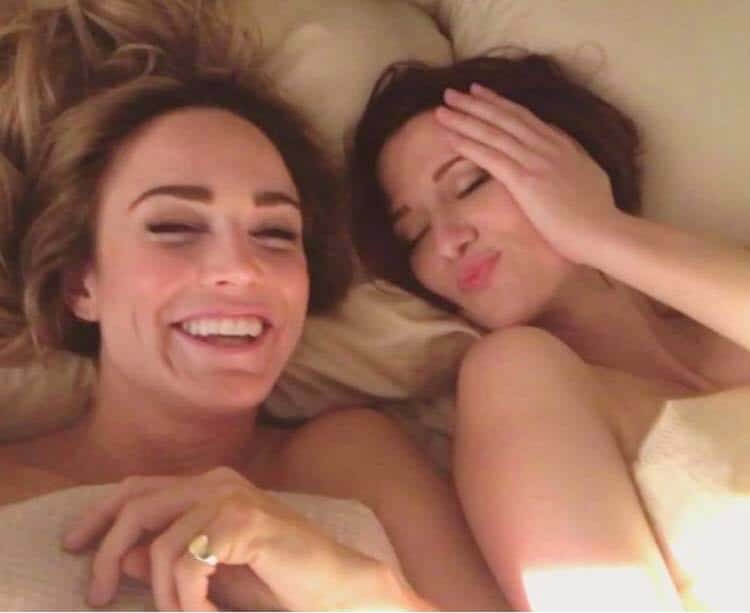 Another fun bit was bringing back characters who were previously killed, like Quentin Lance and Tommy Merlyn. Even if they were alternate versions of themselves, it was still pretty fun to see them interacting with the old casts again. Having Red Tornado appear at the end and just be a total bad ass was geektacular!

Seeing Winn rise to ranks of Rebel General Leader was pretty interesting too. It makes me wonder what his world’s father (aka Toyman) was like and how he interacted in that world. Same goes for other meta-humans like Martian Manhunter, Isis, Mon-El, Vixen and the like. Either way, it shows a great strength of character for Winn, even if he was a bit of a blowhard.

Final Thought: Here’s to looking to see what happens in the next episode, and if Firestorm will make it through the storyline alive!

Over the Garden Wall: Familiarity in the Unfamiliar
January 20, 2020