The Paper Girls: Extra! Extra! Read All About It! 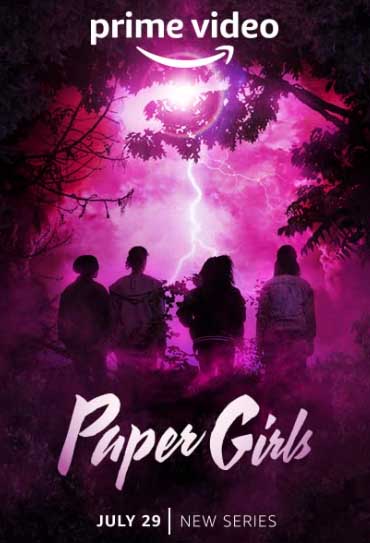 Four young girls get transported to their own future where they must try to get back to their own time and come to terms with how their future lives turned out.

In 1988, in a suburb of Cleveland, Ohio, four twelve year old girls are out delivering papers on the morning after Halloween.  New girl, Erin (Riley Lai Nelet) is being shown the ropes on how to survive by Tiff (Camryn Jones), Mac (Sofia Rosinsky) and KJ (Fina Strazza).  The morning after Halloween is a dangerous time, as teen boys like to bully the girls.  When Erin is attacked and Tiff’s walkie talkie is stolen, the girls track it down to a house under construction.  What they find there wasn’t what they were expecting, and the girls are thrust into the middle of a war between two factions of time travelers. In the first two episodes, our heroes are transported forward to 2019, where they meet Erin’s adult self, and she must face the disappointment that her future is not as bright as she intended it to be. 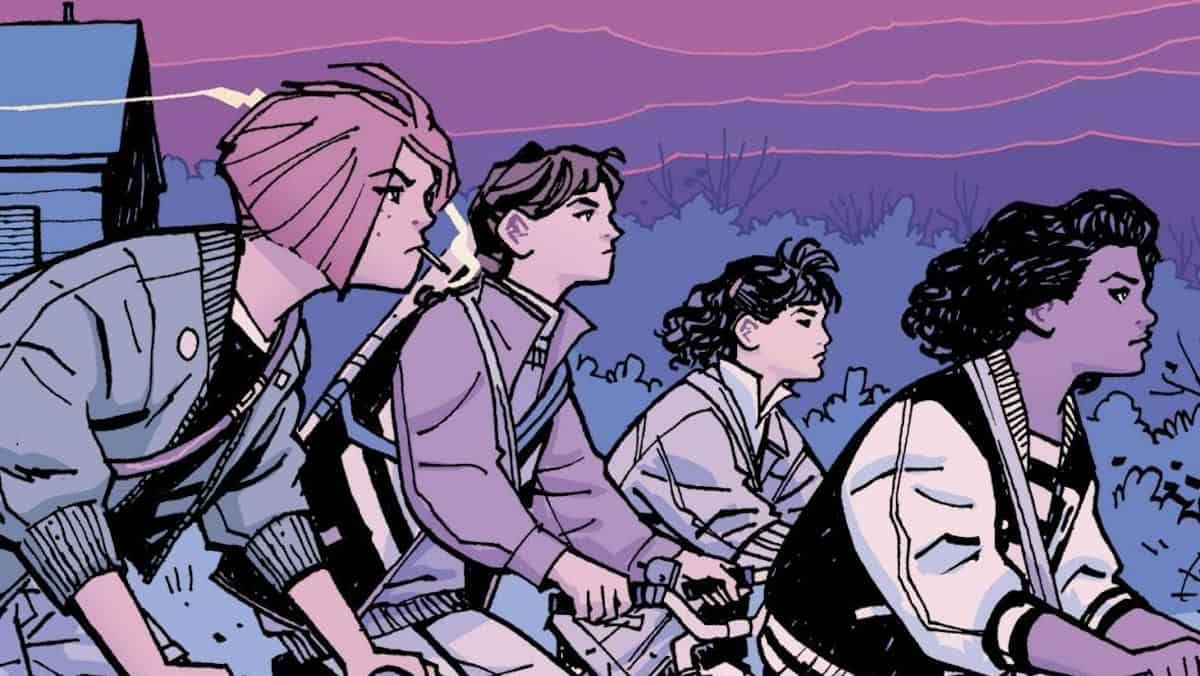 The Paper Girls is based off a comic book of the same name, written by Brian K. Vaughan, and illustrated by Cliff Chiang and premiered on Amazon Prime on July 29, 2022, with the release of all the episodes, so it is binge-able.  I have only watched the first two episodes and have not read the comic book and so cannot comment on the entirety of the series or how it compares to the source material. 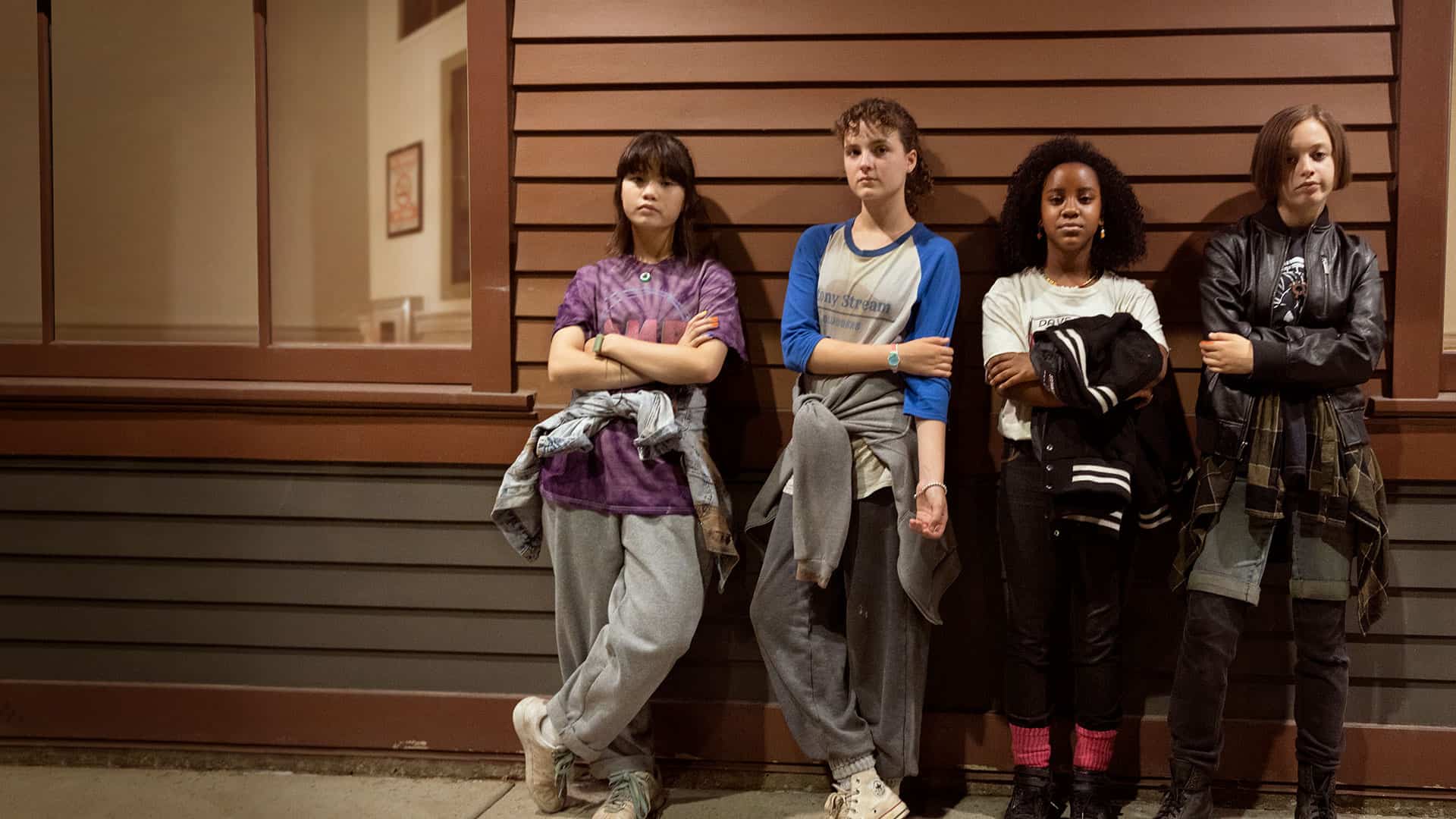 The series is definitely science fiction based, with future soldiers fighting with weapons not yet developed, time travel pods, and medical insect bots, and the situation the girls are in is absolutely extraordinary. The real drama and most of the action is centered around their history and futures and when the two collide, how they embrace or reject their fate.  The girls are all from vastly different demographics.  Mac lives in poverty with her blue-collar father and brother, she is tough, and puts on a tough act, but really, she is envious of what all the other girls have.  KJ is from a wealthy family, but she resents that. She also must battle ethnic discrimination as a Jewish girl.   Erin who is Chinese and Tiff who is black, are also battling discrimination.  People of Asian descent seem to be specifically disliked in the town, as it is alluded to that the main employer, the auto plant, is being taken over by a Japanese company, putting many of the town’s folk out of work. Each of the girls have their own demons they are battling and the peak at their future selves is somewhat unsettling. The girls’ performances are all very good.  The emotional gamut that the girls must run is impressive switching from timid, to angry, to shocked to jovial, showing remorse, disappointment, happiness, camaraderie, strength, and vulnerability, sometimes all within the same scene.  The young actors handle this all very well, playing it realistically without going over the top.  I do think the initial acceptance that they have time travelled happened a bit quick, with little explanation of what is actually happening.  The production value is good, but the visual effects aren’t anything groundbreaking, but are adequate and don’t detract from the story. The music is well chosen with songs from female groups of the 80s.   The plot is intriguing with enough mystery and adventure to keep an audience, but the shows rhythm was a bit off, hard to explain why, but it just didn’t flow as well as it could have.  Possibly this is due to the amount of exposition that needs to happen to really comprehend why the young girls react the way the do when meeting their future selves.  Plus, there is a whole war going on that hasn’t quite been explained.  The two factions are not from 1988 or 2019.  Who are they, where or when do they come from and why are they fighting, hasn’t even been posited as a question yet.  All we really know is that the Prioress (Adina Porter) is ruthless and is not afraid of killing.

The show is well acted and has an interesting story with likeable, flawed and vulnerable characters.  Definitely worth a watch.

The Paper Girls: Extra! Extra! Read All About It!