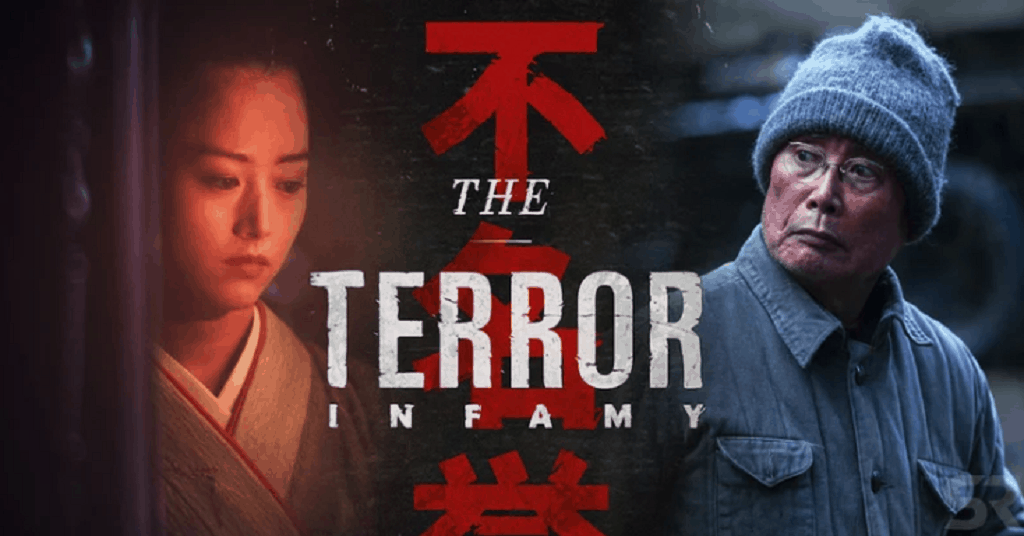 The Terror: Infamy is the second season of AMCs seasonal anthology series, The Terror. Taking place in World War 2 America, it follows the lives of Japanese Americans forced to enter the Japanese internment camps. The season focuses on Chester Nakayama, a wannabe photographer, and the lives of his family. He is about to have a child with a Mexican woman, Luz, who enters the camp with him. All the while, the camp’s residence’s are being haunted by a Japanese ghost: a yurei. 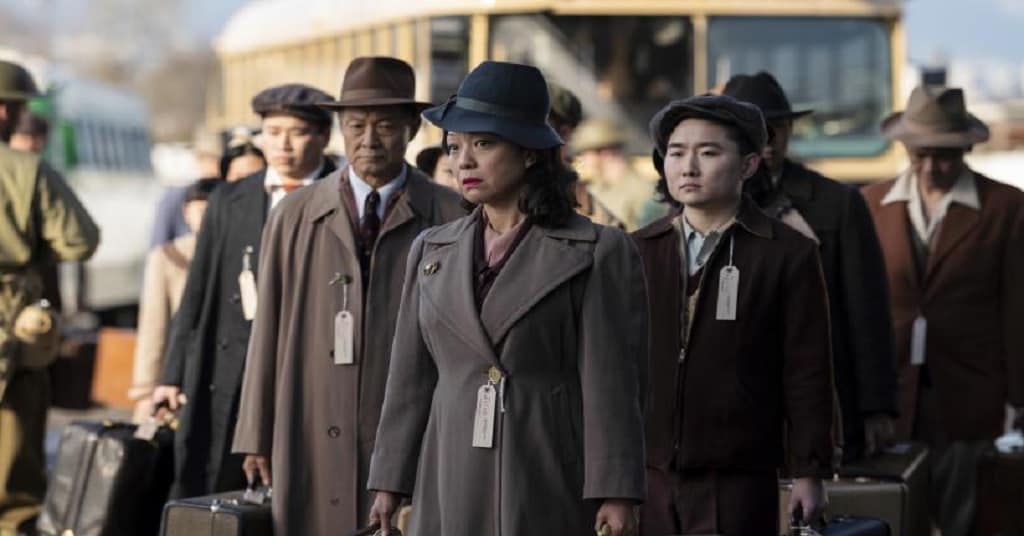 The season starts off on an okay note, with a fairly strong first episode. There were a lot of things starting off that felt very much in place. There were plenty of creepy moments, the atmosphere fit the show, and the characters started off being somewhat likeable. However, this changed as the season progressed. The characters, except for one, didn’t grow to be more likeable than they were in the first episode. The characters didn’t really grow at all. And, when they did, characters that were meant to be likeable grew to be more unlikeable then where they started off.

For example, there’s our main character: Chester Nakayama. He starts off as a fairly basic protagonist, and continues to remain that way. Sure, he has conflicts, but they’re all resolved in a very boyish way. For example, (And this is a spoiler, so if you don’t want any, skip to “You never feel sorry…”) in episode 7, Chester finds out that his parents adopted him. Instead of dealing with this in a calm, collected manner, like an adult, he throws a temper tantrum and ends up getting thrown out of the camp. If Chester were a seven year old boy, this would make sense. But he is not, he is a grown man. You never feel sorry for Chester, you always feel that he’s living out some sort of pouty, edgy teenager faze at best. This isn’t preferable for when trying to build him up as a noble protagonist. 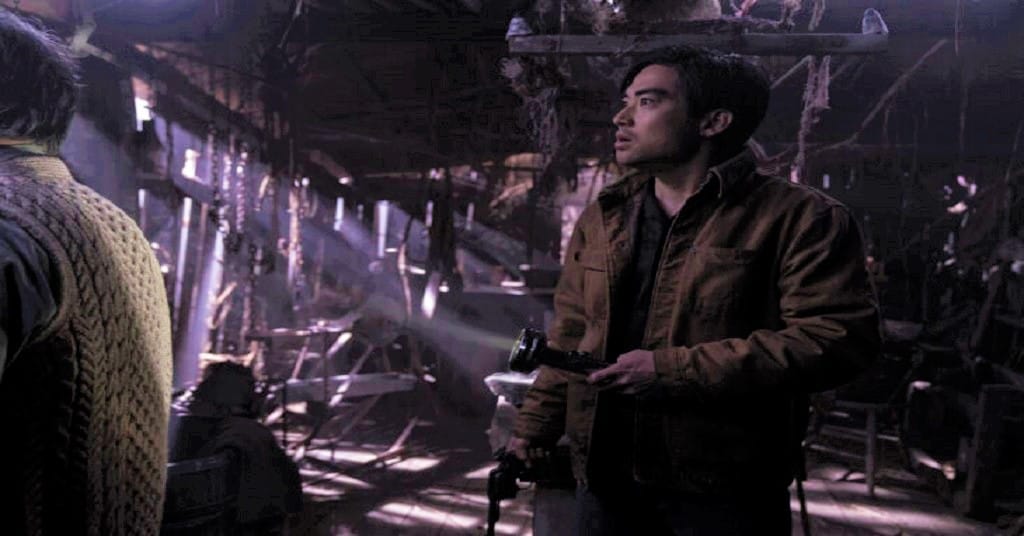 His relationship with Luz feels incredibly forced. For such a large part of the season, their relationship never gets time to develop save for two shots of them in the first episode. After that these two characters are thrust into a rather impossible decision where Luz chooses to go into the Internment Camps to be with Chester. They go through challenge after challenge and they still end up stronger than they were before, even though  you rarely see moments where they seem to have any reason to want to be together.

Luz is exemplary of a lot of female characters in The Terror: Infamy, not that we have a ton. Besides Luz, there’s Chester’s mom, Asako, and Amy. Asako and Luz both serve one role, to be subservient to the men in their lives. If the man runs away, the woman will wait for him. If the man gets unreasonably upset, the woman will just have to pray for forgiveness over actually asking for it. While the show is set in the 1940s, and that is the way women were treated at the time, the show gives no acknowledgement to the fact that this behavior shouldn’t be occurring. If anything, it romanticizes it. Amy, thankfully, does shy away from that stereotype, proving to be a little more interesting. But, unfortunately, we don’t see enough of her.

This next part is a spoiler, so if you don’t want spoilers, skip to the next paragraph. Yuko’s backstory in episode 6, providing a twist to the season, proved to be one of its worst aspects. The twist is that the yurei, Yuko, is Chester’s mother and Asako’s sister. While it does give reason as to why she’s doing what she’s doing, there are a lot more questions this twist creates. For example, why doesn’t Yuko try and contact either her son or her sister earlier? We know she knows they exist due to how the episode ends, but she doesn’t try and contact them, instead trying to take his son’s child and make it hers. And it’s never really explained, except for the weak explanation at the end that Chester was too Americanized. As far as Asako, they presumably had a relationship, but it’s only explored once in a short flashback scene that doesn’t really add anything to what’s already been told, which isn’t much. The point of this reveal is to make Yuko a tragic character. Unfortunately, it fails at this, because of the apathy she shows her sister and son. What’s left is an unrelatable villain whose intentions are explained fairly early. Once the villain’s intentions are explained, the villain becomes less scary, and more predictable, which is why most villains are revealed at the end. Therefore, it’s nonsensical that the villain is revealed here.

Furthermore, there are two very conflicting central ideas of the show. There’s the central idea that what happened to the Japanese Americans during this time is horrific and there’s no justification for it. George Takei, a character and consultant for this season, said in an interview that the Japanese Internment camps are very similar to the Immigration Detention Centers in modern America. This season very much, albeit latently, drew the comparison. However, there is another theme of human nature, particularly, the human nature of the Japanese Americans. While the season has its racist white characters, it also has a number of morally problematic Japanese characters. While this would work if it were either about human nature or about the Internment camps, having them both at the same time doesn’t work. The messages of the terribleness of the camps works well, and the implication of it as a metaphor for modern times also works well, without any preachiness as in my first review I expected. 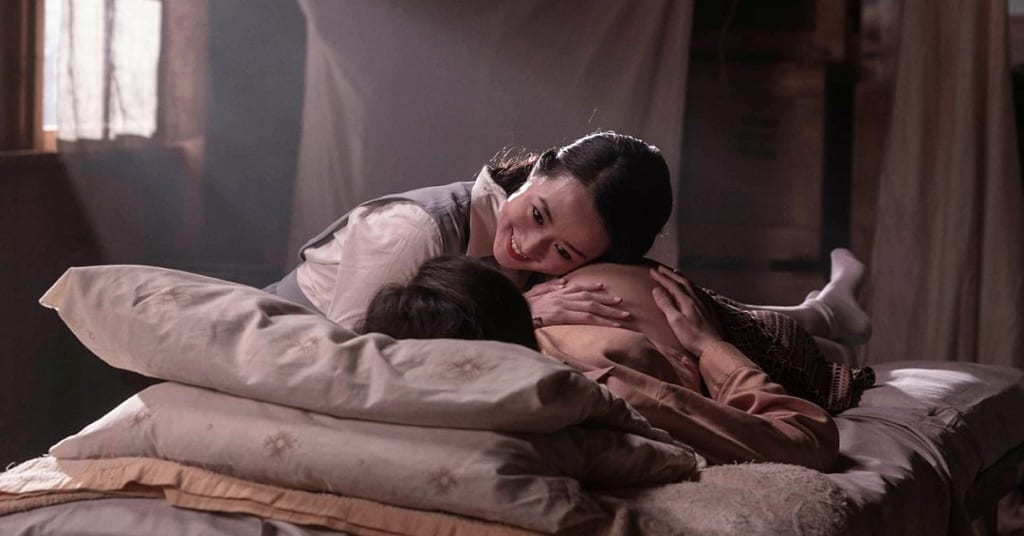 Unfortunately, in the end, this season isn’t all that scary. While the first episode has a few terrifying moments, particularly in the first scene, after that there isn’t as much. And, it’s not treated like it is in the first episode. I described The Terror in the show’s first season and in my review of the show’s first episode to be a “slow burn” kind of horror. While it may have been true then, it certainly isn’t true now. The show stopped having these slow burn moments very quickly, instead being replaced by scenes of brutal, unnecessary violence and gore. The darker lighting is utilized well with some of the more horrifying shots, but, given it’s used continuously, it starts to lose its value over time. And, the villain’s true form is fully revealed in episode 5, exactly halfway through the season, with all of her powers revealed beforehand. Therefore, in every episode after, very little is scary anymore; everything’s predictable.

One of the biggest problems of the show is the acting. While none of the actors perform fantastically, with the exception of a few. Derek Mio, who plays Chester Nakayama, the main character, is particularly disappointing. To be completely fair to him, he’s traditionally more of a comedic actor, but his performance as Chester Nakayama is comparable to an actor on a Disney Channel show. It’s a mix of over-acting and under-acting, and not a mixture that cancels the individual substances out to make plain “acting”

The biggest disappointment, however, is with George Takei. He’s barely in the show, and when he is, he appears for only a few seconds. The show very heavily advertised the second season as starring George Takei, but in reality he’s in it for a very small amount of time, having, at most, ten lines in total. He has absolutely no discernable characteristics, other than the fact that he’s old, and his inclusion is completely unnecessary to the plot.

To be fair, it did have its good moments. For example, Amy’s conflict with Major Bowen was a fairly interesting one, and the conclusion to his story arc was satisfying. Major Bowen himself, played eloquently by C. Thomas Howell, was a cool character. His upbeat nature was a strict contrast to his explicit racism and brutality. Amy was also interesting, the only strong female character in this season, who ends up doing the most for the people of the internment camp. She’s seen in a more tense situation then Chester is, trying to save everyone through her position as a secretary but still under the control of the Major. Also, Henry Nakayama, Chester’s conservative, stuck in his ways, father has a satisfying conclusion to his character arc. While this is partially due to the talent of Shingo Usami in portraying him, nonetheless his conclusion was satisfying.

This season was not the best, having a lot of flaws due to characters, themes, and cinematography. Although it had a few merits, ultimately it’s not worth the watch.