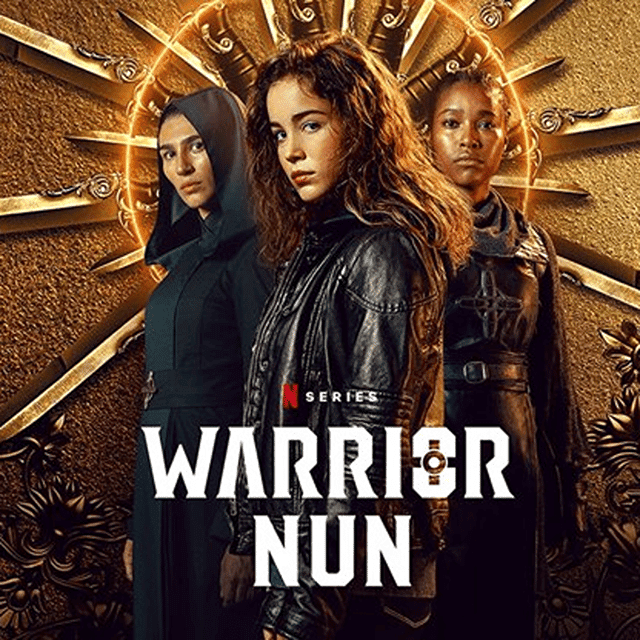 Ava must deal with the events of season one while she trains for a rematch with Adriel.

Ava (Alba Baptista) was an tetraplegic orphan who, after being killed, is resurrected when an angel’s halo is embedded in her back.  This leads her to the OCS (Order of the Cruciform Sword), an ancient order fighting demons on earth.  The events in season one culminates in Ava freeing the demon that everyone believed was the angel who gave up his halo to save the original Warrior Nun.  Season two opens with Ava laying low with OCS member Beatrice (Kristina Tonteri-Young), both work at a bar and Beatrice continues to train Ava in fighting and the use of her powers so she will be ready for the rematch with Adriel.  Ava feels guilty for being tricked into releasing Adriel (William Miller), who now has a dangerous cult following that believe him to be a divine angel.  Jillian Salvius (Thekla Reuten) continues to work on her portal in hopes of getting her son back.  Lilith (Lorena Andrea) searches for Mary, who nobody knows if she is dead or alive.  Father Vincent (Tristán Ulloa), who is in league with Adriel, tries to thwart Lilith and traps her which ends up in a blood bath. The OCS seems to be at an end as their outposts are being defeated. The newly elected Pope (Joaquim de Almeida) tries to keep the rumors at bay, while still trying to collect the halo. I must offer full disclosure, I have not watched season one, and honestly had not heard of the show before being asked to do the Season Two review.  I am aware of the comic book which the series is based on but have not read it.  So, I am going into season two blind with little knowledge of the series story to this point and no perspective on how it compares to the source material.  That being said, this is completely my loss, as the series seems very well done and interesting, but I am very confused and lost in what is happening and what is truly going on.  Episode one of season two is not a good place to try to jump into the series.  Even with the “Previously On” prologue to the episode, I was still scrambling to use context to fill in the blanks, and figure out who was a good guy, who was bad, who was a demon and was Adriel really an Angel?  By the end of the episode, I did feel like I had a keen grasp on the main points that transpired in season one and how we got to where we are in season two. All the action in the first episode of season two happens in different locales throughout Europe, mainly focusing on Spain.  I am going to assume that the first season is similar.  I am pleased that they actually cast European performers.  Alba is Portuguese, Kristina Tonteri-Young is a Finnish / New Zealand actress, Tristán Ulloa is Spanish, Thekla Reuten is Dutch, and the list goes on, but there was never a moment that I couldn’t understand what they were saying, well except when they were actually speaking a non-English language, but subtitles were provided.  The acting is all quite good and there are some really nice moments. The production value is high as well with the small use of special effects emphasizing the plot and not detracting from it.  The settings are all chosen well relating the modern story to the rich European and religious traditions that form the backdrop for the show.  The music choices were good with a balanced mixture of pre-existing songs and originally created music.  The plot line, although a bit confusing, is intriguing and there is plenty of room for more character development as the series progresses.

The only negative thing I can really say about the show, is that the current market seems to be overrun with “strong girl with special powers fighting big bads” plot lines, which almost makes this series feel a bit cliched.

Overall, a strong show with a great and diverse cast, but with the number of similar shows out there, felt just a tiny bit cliched.