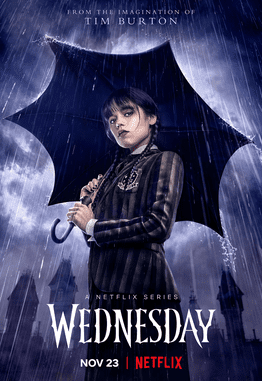 Episode Title: Wednesday's Child Is Full of Woe, Woe Is the Loneliest Number

Wednesday Addams begins attending Nevermore Academy when she gets pulled into a mystery involving her own family.

The gothic morbid humor of the Addams Family has captured the hearts of its audience since the late 1930s when the original comic strip by cartoonist Charles Addams premiered in The New Yorker. People of a certain age will remember the 1964 television series, or the Film series in the 1990s, or the multiple cartoons throughout the decades.  All the past incarnations have focused on a family of strange but wonderfully dark family whose idiosyncratic ways are juxtaposed against the normal world.  To the Addams, they are the normal ones, and everyone around them are the “weirdos”. This latest version, now streaming on Netflix, narrows the focus of attention down to one family member in particular, the teen daughter, Wednesday (Jenna Ortega), born on Friday the 13th and named after a line from her mother’s favorite poem, “Wednesday’s child full of woe”. After being expelled from Nancy Reagan High School, for taking vengeance on the bullies who tortured her brother, Morticia (Catherine Zeta-Jones) and Gomez Addams (Luis Guzman) pull some strings and enroll Wednesday in their old alma mater, Nevermore Academy.  This is a school for the outcasts in a world that fully acknowledges the existence of vampires and werewolves and all matters of other creatures.  Although the school is filled with these outcasts of society, it is like any other school, with its cliques and bullies, queen bees and underlings, jocks and nerds and Wednesday disrupts them all.  At first, she is reluctant and attempts several times to escape, trying to prove that she is nothing like her mother, but when a mystery pops up that involves a monster killing people in the nearby woods and a prophecy that she will destroy the school, Wednesday accepts her plight and remains.  With the help of her overly optimistic werewolf roommate Enid (Emma Myers) and a love interest normal boy from the nearby town named Tyler (Hunter Doohan), Wednesday attempts to solve the mystery that brings some family secrets to life. 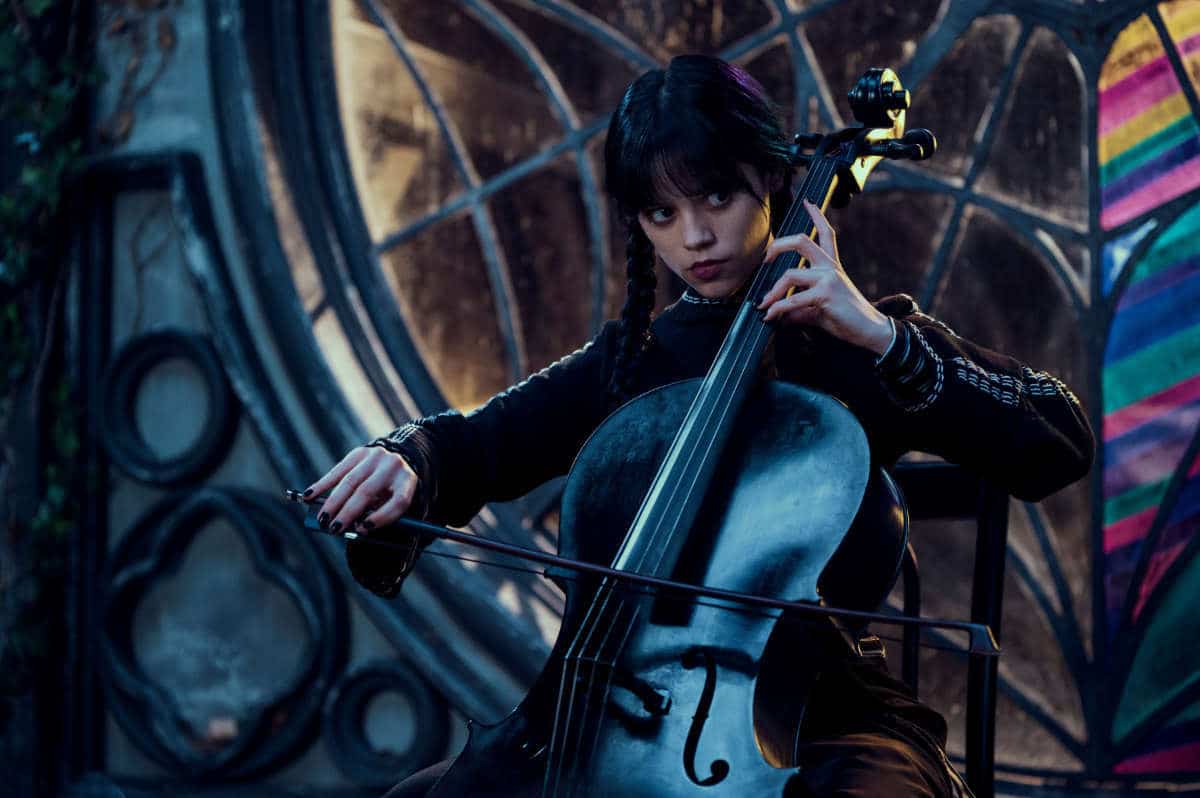 When I first heard about this series, I got very excited for I love the Addams Family and I love murder mysteries and this combines the two, but to sweeten the pot a little, it is directed by fan favorite director, Tim Burton with music by my favorite movie composer, Danny Elfman.  After watching the first two episodes, I was not disappointed.  Jenna Ortega plays the perfect Wednesday, rivaling Christina Ricci’s portrayal in the 90s movies.  Ricci returns to the “Addam’s Family world” playing the only normal human instructor at the school, Marilyn Thornhill.  Gwendoline Christie plays Larissa Weems, the dean of the school, whose sunny disposition is contrasted with a dark and knowing smile hiding a multitude of secrets.  Wednesday believes emotions make you weak, but Jenna’s stoic stature slips from time to time to show that Wednesday has a very deep (and dark) emotional well.  I was a little worried at first that the overly cheery Enid would be a weak link, playing the stereotypical upbeat roommate, but Emma Myers turns her character into a loveable ray of sunshine that even Wednesday begins to like (although she wouldn’t admit it). The plot is a kind of hybrid, combining a coming-of-age story with a supernatural horror comedy mystery.  The storyline is intriguing, and the characters all have secrets they are hiding. The script is smart and clever, with the classic Addams’ family dark humor.  The production value is adequate, although the look of the murderous creature was a bit cartoony. There are some great cinematic moments that combine the glorious music of Danny Elfman with the some beautifully composed visual elements.  The school grounds and other locations are well designed and the darkening of Wednesday’s school uniform, is a perfect foil from the other students’ colorful clothes.  This highlights the recurring theme, that even a group of outcasts have their outcasts.

I am not sure everyone will like this show, but it is right up my ally and I love it!

All episodes of Wednesday are available to stream on Netflix.