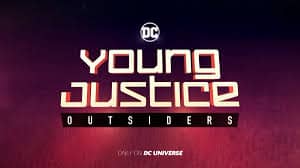 Its been a long and frustrating hiatus but Young Justice is back! Again! Yes the long awaited second half of the long awaited third season of the DC animated series has returned to us and already its looking to be another fantastic ride.

The episode opens with the Justice League (having been in space for two years since the end of Season 2) on Thanagar investigating a pile of dead Thanagarians left by Darkseid’s Parademons after they stole some rare Nth metal.

We then visit Happy Harbor and become reacquainted with Brion, Violet and Forager. Now that the three of them have gotten accustomed to their powers and situation, Nightwing invites them to join the Justice League’s covert ops team. 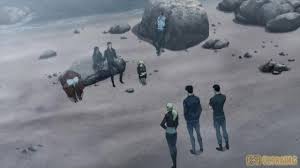 We then cut to a TV news bulletin where it appears that popular VR goggles have been busted by Kaldur and the rest of the League for identifying meta humans, subliminally guiding them to kidnap locations, having their meta gene activated and then sold into super slavery.

We then pan away from Kaldur’s press conference to reveal Lex Luthor at the UN admonishing the League for their lack of autonomy only for THAT to pan away to reveal G. Gordon Godfrey roasting the methods of Luthor and the League.

After stopping a purse-snatcher and growing increasingly suspicious of Granny Goodness' plans upon watching her interview with Godfrey, Beast Boy decides its time he takes more active measures.

On the Watchtower, M'gann notes show with the new recruits joining her team  as well as veterans like Conner, Artemis and Beast Boy returning to active duy, membership seems to have doubled. After Artemis praises the increase in female membership, Violet reveals that she doesn't 100% know if the presence of the Mother Box inside her is female. Brion assures her that this more than fine with him.

Back on Godfrey's show, Luthor is interviewed where he again reiterates the League's need to be held accountable for their influence. It is here that Lex's sister Lena is first mentioned as well as Luthor hardly bothering to deny that he may have had something to do with her charitable contribution to a Meta Human Youth Center.

Meanwhile, deep in outer space the League's ship makes contact with a gargantuan space station run by none other than Granny Goodness. With the aid of the fiendish Desaad and her Female Furies, Granny launches an attack on Superman, Wonder Woman and Hawkwoman once they have made it aboard the station.

Back on Earth, it seems like Artemis is fitting in perfectly with taking care of Red Arrow roy Harper's daughter Lian. In the living room, Dr. Helga Jace reveals to everyone that she fears she is not doing enough to help and kindly requests a functioning laboratory to help Victor with his predicament.

The three League members defeat the Furies and even rescue them once Granny subjects them all to a torture ray. As Grann's ship veers away through a Boom Tube there is a voice over of her back on Earth assuring everyone that new and improved technology for people's entertainment is well on its way. The episode ends with Beast Boy looking worried as he watches footage of Lex, Godfrey, Kaldur and Granny Goodness on his laptop.

Three minutes in to Season 3 Part 2 and I’m already loving this!

It was a pleasant surprise seeing Guy Gardener here, I love Guy or any Green Lantern for that matter. I had a good laugh from Guy reiterating “Don’t call us sidekicks!” to the Thangarian General, it was a great throw back to the original tagline for Young Justice when the series was first announced.

I really enjoyed the dynamics of the veteran YJ team’s pitch to the newcomers best seen when Conner mentions that facing danger isn’t a mandatory part of the job and they can follow Aqualad and Donna Troy’s example by fighting their battle inside the system.

I genuinely thought that the VR goggles were going to turn into the Anti Life blasting mind control helmets from Final Crisis. Oh well, it’ll be interesting to see where the series goes with Apokolips that’s for damn sure, its one of the reasons fans wanted it unconcealed in the first place!

I had another good laugh during Kaldur->Luthor->Godfrey pan away scene I thought that was a clever directing choice. I miss Tim Curry as the VA for Godfrey but it certainly looks like James Arnold Taylor is going his best impression of him as seen by his chat with Granny Goodness.

As much as I love the series, that vast number of DC characters on this show makes it difficult to give screen time to all the characters. Did you like all the character development that Conner and M’gann got in this one episode? Then there’s a whole crowd of people who were upset that Dick or Artemis didn’t get enough time and vice versa.

Any episode that has a part where Lex Luthor looks at the viewer asking “Who Watches the Watchmen” is a gem in my book. Its especially relevant today especially with the events of the enjoyable if heavily delayed Doomsday Clock comic series. Lex’s attitude in the latter part of his conversation with Godfrey was a great example of his manipulative behavior.

Going back to my earlier comment about too many characters, its fascinating to see Lena Luthor now apparently being introduced but remember we still have other characters and plot threads like Jason Todd, Black Lightning, Darkseid and even Damian Wayne still out there so the fear that this party is getting a little crowded is becoming increasing valid.

I loved seeing the tranquil threatening tone of Granny Goodness perfectly displayed here. Having her electrocute Big Barda for basically nothing, not for torture just for “discipline” was 1000% in character with the sadistic leader of the Female Furies. 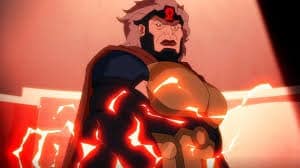 Sadly, its also beginning to look like Terra isn’t a triple agent as hoped and really is a spy for Slade Wilson. Yes, it seems as though YJ really will go through with the Judas Contract story line after all…somehow in the middle of the thirty other plots going on.

The action didn’t kick up until the very end of the episode with a great if brief fight between the Female Furies vs Superman, Wonder Woman and Hawkwoman. I found the ending to be a little empty. Just seeing Beast Boy on his laptop looking concerned about the growing Granny threat didn’t exactly provide us with any new information, but in a world where cancelled TV shows come back from the dead I guess that’s a minor gripe.

Overall, the plot development here wasn’t too crazy but for what we got, I am satisfied and more excited than ever to continue watching this excellent series and what happens to the many characters that make it what it is.