Drumsticks of Doom- Issue 2 (and Issue 1)

Issue two of the Heavy Metal saga is moshing towards you!

When Black Sabbath (not the Beatles) became the world’s most famous band, the universe was changed, musically and otherwise. Lost arts, like Alchemy, were made common, schools taught about transfiguration and alternate science, Demons were summoned and some stuck around.

Lana LOVES music. She has played in bands all through high school and now, in college, she still plays in her ex’s fledgling metal band. She’s finishing up the best practice yet when they are drawn into a spiritual battle to keep metal on the top of the charts. 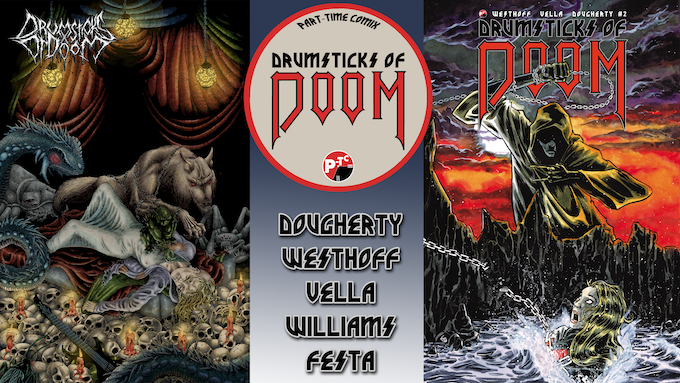 Issue 2 continues the mystery of the drumsticks as Jimmy and Lana head to the factory where the mallets were manifested. Lana still doesn’t understand her powers as they begin to change and they may be changing her.

Sharp Wit & the Company of Women 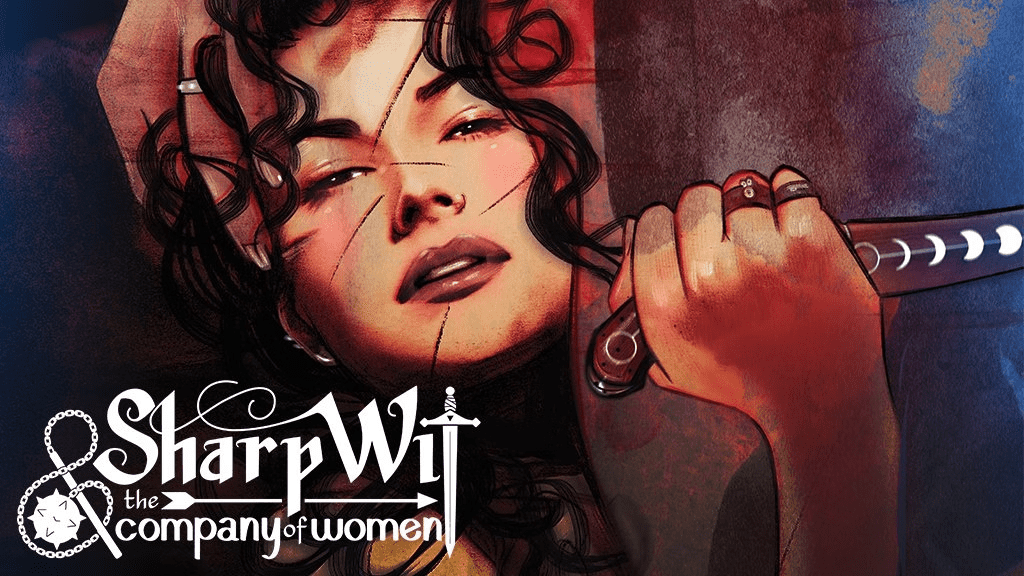 From editors Michele Abounader and Brent Fisher, comes Sharp Wit & the Company of Women (SWATCOW), a multi-genre comic anthology featuring creators who all identify as members of the LGBTQIA+ community. This 150+ page comic anthology will include 19 original stories about the strength, power and agency of women. The project’s Kickstarter campaign page (via www.swatcow.com) will be live as of September 27th at 12:00pm EST.

The 19 story teams include some of the most invigorating queer-identifying talent in comics today. In supporting this anthology, backers will be directly supporting the efforts of creators that span spectrums of sexuality and gender identity. The campaign will also feature several rewards items including cover art prints by Tula Lotay, and additional art prints by Elisa Romboli and Natasha Alterici.

In the first issue of Granite State Punk, we gained insight into the New Hampshire landmark, THE OLD MAN OF THE MOUNTAIN.  Zeke had just gotten released from prison and is now living in the last place he ever wanted to be… his dead parents’ house. He has for years tried to drown out every ounce of the memories of this place and his messed-up childhood.  Zeke now is forced to confront it and the revelation that his past is filled with the occult and dark magic. 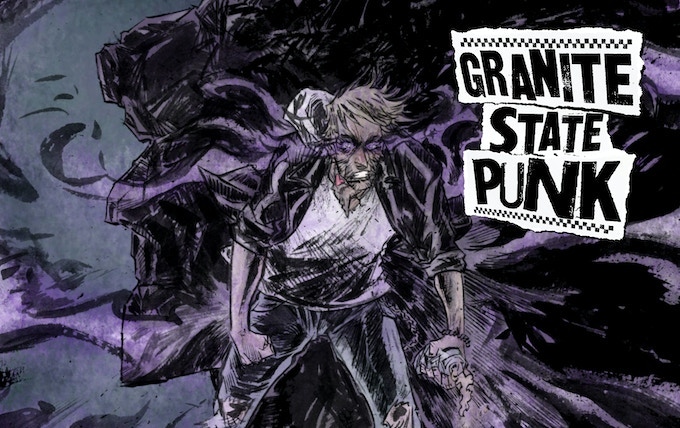 This KICKSTARTER is for the NEXT ISSUE of GRANITE STATE PUNK: BREAKING EDGE -a BRAND NEW SERIES.  This all-new comic book One-Shot is for mature readers only! If you like PUNK ROCK, WITCHES, MONSTERS, and HISTORICAL FICTION, this is the Kickstarter for you!! This is the 15th campaign that Orange Cone Productions has launched and we can’t wait for you to join us again.

In this issue of Granite State Punk, we look at the legend of Goody Cole. She was the first woman put on trial and convicted for being a witch in the state of New Hampshire. After the end of the last issue, newly straight-edge Zeke goes to Hampton Beach to learn more about his past from his estranged uncle. However, what he finds there is something entirely different. 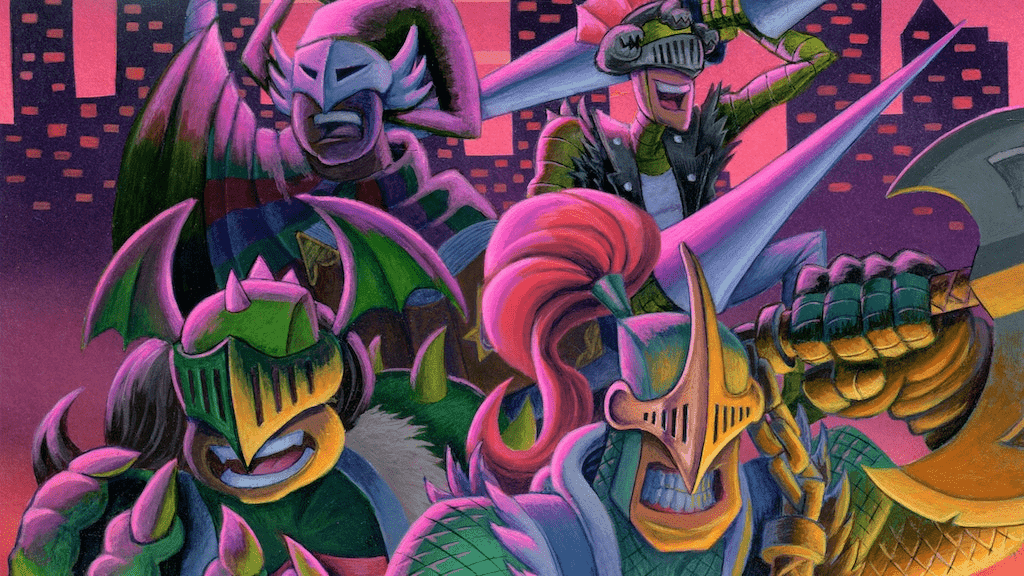 The Green Knight of Arthurian legend and a band of 12-year-olds from 1992 travel to the future to battle environmental catastrophe.

Ernie and his friends just wanted to have a fun afternoon at the local arcade playing their favorite game: Knight Fight Fury 4. But then, as if their favorite game came to life, the Green Knight of Arthurian legend comes smashing into their lives with a time-traveling quest to save the future! Their objective? Stop the evil knight Mordred from killing the Earth Goddess in the year 2123 in a place known only as… THE ALPHA ZONE. 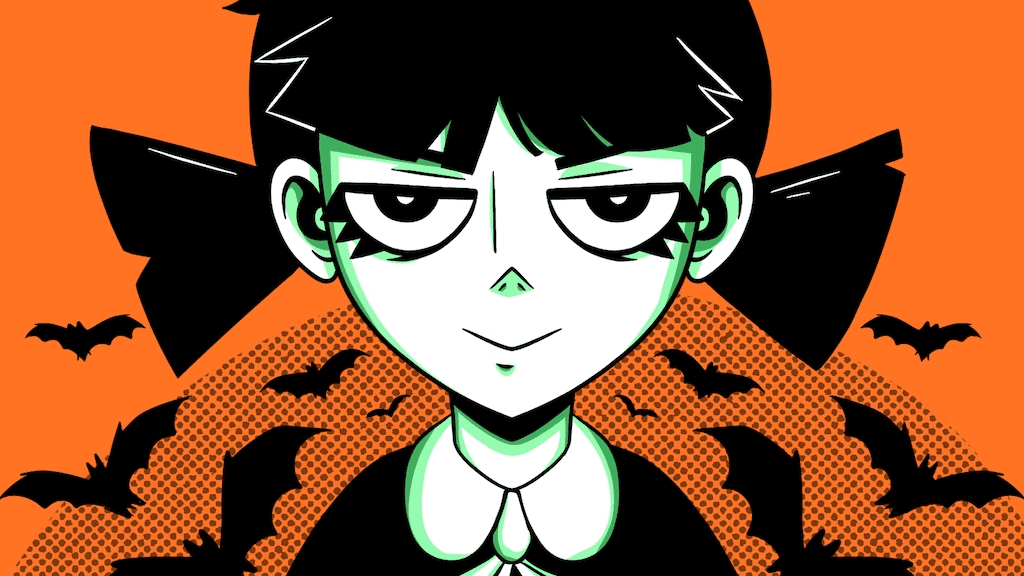 Halloween House II is a 16-page color comic book about the secret lives of your favorite Halloween monsters and their human adopted daughter, Annie. But don’t be fooled, Annie seems to have a more sinister streak than her supernatural housemates… Last year I self-published Halloween House I, and now the ghoulish family is back for another year of chills and thrills! This issue follows Annie trying to resist her murderous urges when her dad tells her to make friends with the neighborhood trick-or-treaters. 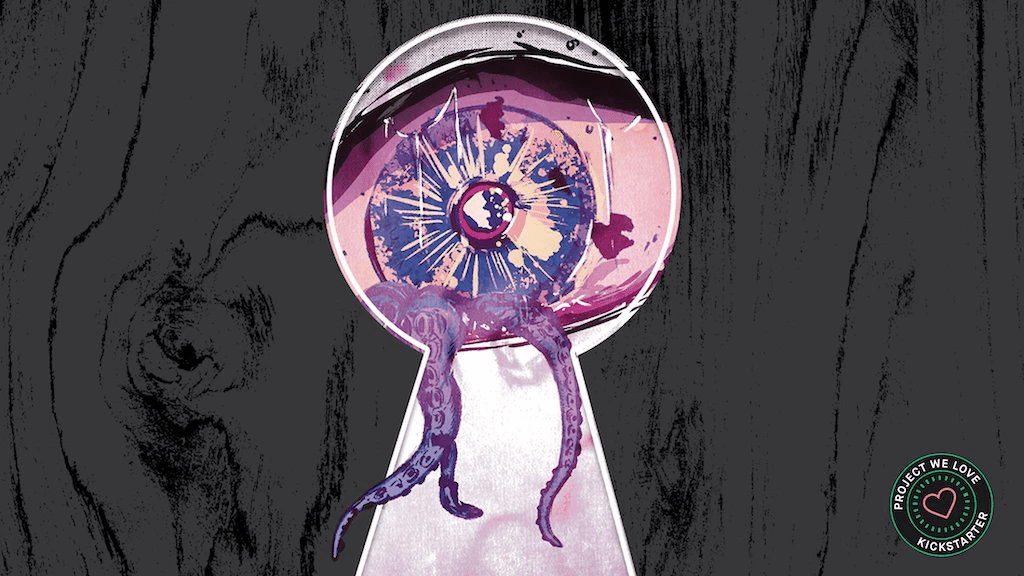 Welcome to Monstrosities, Warden Comics’ 2022 horror comic anthology. Returning from their recent successes on NOD, Double Cross, and Crow and the Eternal Night, Monstrosities is a full escapade of horror crazy curated by Ludie Sexton and Colleen Palmer. For this project, we’ve paired some insanely talented indie creators to bring you over 100 pages of insanity driven terror. If that’s not enough to back our book, it’s also complete and ready to go to print as soon as the Kickstarter is over! 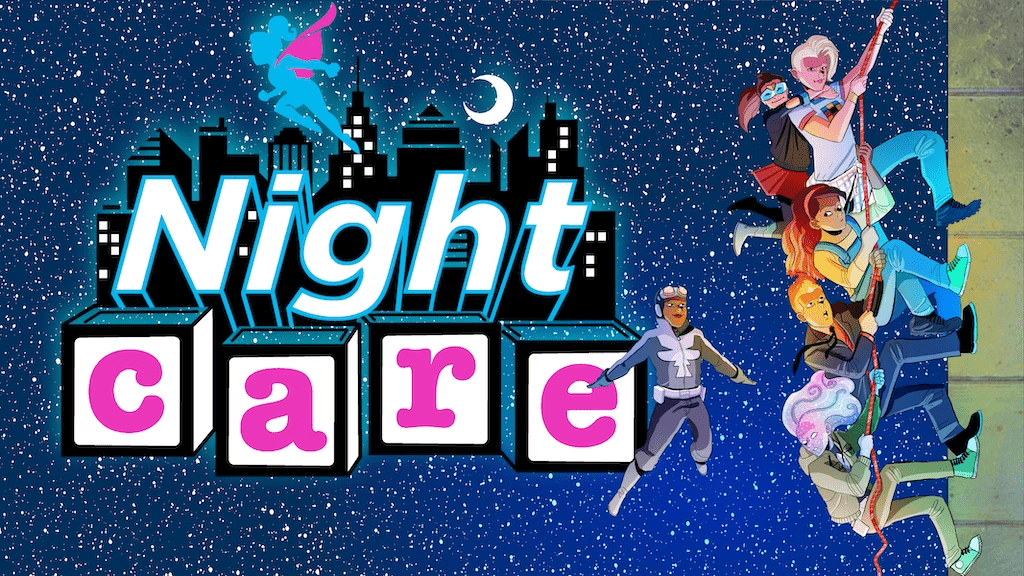 We took our love of John Hughes movies and infused it with our love of teen superheroes. The result was Adventures in Babysitting the Teen Titan Runaways — or as we like to call it, Nightcare. It’s a 48-page, full-color comic about a group of very special children who are not taken seriously, who have to step up to save one of their friends when everyone tells them not to. They put aside their prejudices to become something mightier than anyone could have imagined. The world can be a big, scary place and sometimes terrible things happen — but with some determination and the right set of friends, anything is possible.