Costumer, Ngila Dickson, and concept designer, Richard Taylor are responsible for hundreds of elaborate costumes from one of the most successful trilogies in cinematic history. If you’ve seen the “Lord of the Rings” films, then you’ve seen their exhaustive work. Between forty seamstresses, over nineteen thousand costumes were created for the films.

Each of the different races in the trilogy had a very specific look which set them apart from the others. Different fabrics, styles, and colors were used to differentiate the Elves, Dwarves, Humans, Hobbits, and Wizards.

For the Elves, Dickson said, “They invoke their environment and they’re very light on the earth, so we searched for very, very fine layers of fabrics for them.” The fabrics for their clothing included Indian silk brocade which had been treated with a combination of bleach and sandpapering to achieve their shimmering, metallic effect.

Mirkwood elves, like Legolas, wore a very basic suede jerkin over a pale silk shirt and dark trousers. His knee-high boots were a soft leather. His entrance into the trilogy included a velvet cloak, which he would not wear again. He, like the other members of the Fellowship, would also wear an enamel pin of green and silver. Legolas also wore a vambrace on either wrist, both detailed with a scrolling gold pattern.

Arwen and her father, Elrond, are given similar looks, ones indicative of their High Elf heritage but very much practical for the purposes they’re worn. What’s called Arwen’s “Chase” costume consists of a dove-gray suede coat, belted with an ornate silver buckle, and an underskirt. It also has an open collar which stands just at two inches. It’s constructed from angular shapes and a few S-curves which help the costume to flow when she attempts to outrace the Nazgul. 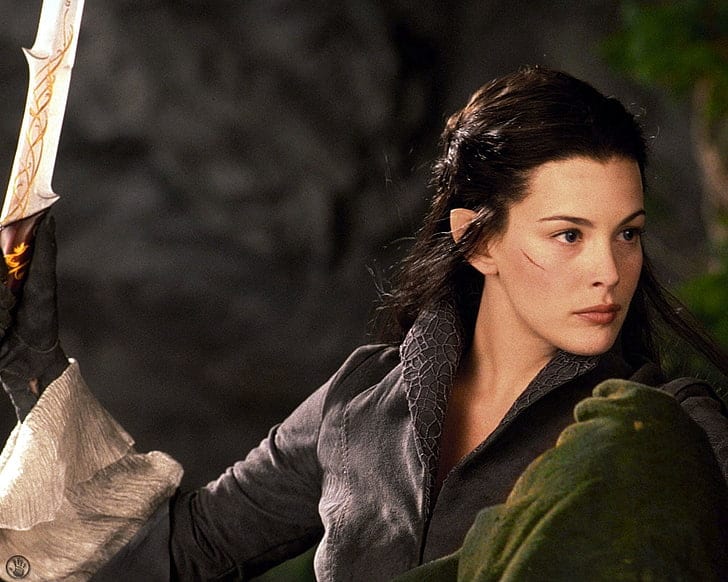 Elrond’s overall look is one of flowing robes and fitted under robes. Most are made of a type of silk and fasten with small ball-buttons. They’re very often sleeved with a belled type lower arm, giving them the same sort of “Other World” feel as other Fantasy and Science Fiction films. A lot of his robes have a kind of stitching or embroidery on either the shoulders, the back, lower sleeves, or all of the above. This sort of finery is not given to any of the other characters in the same way. 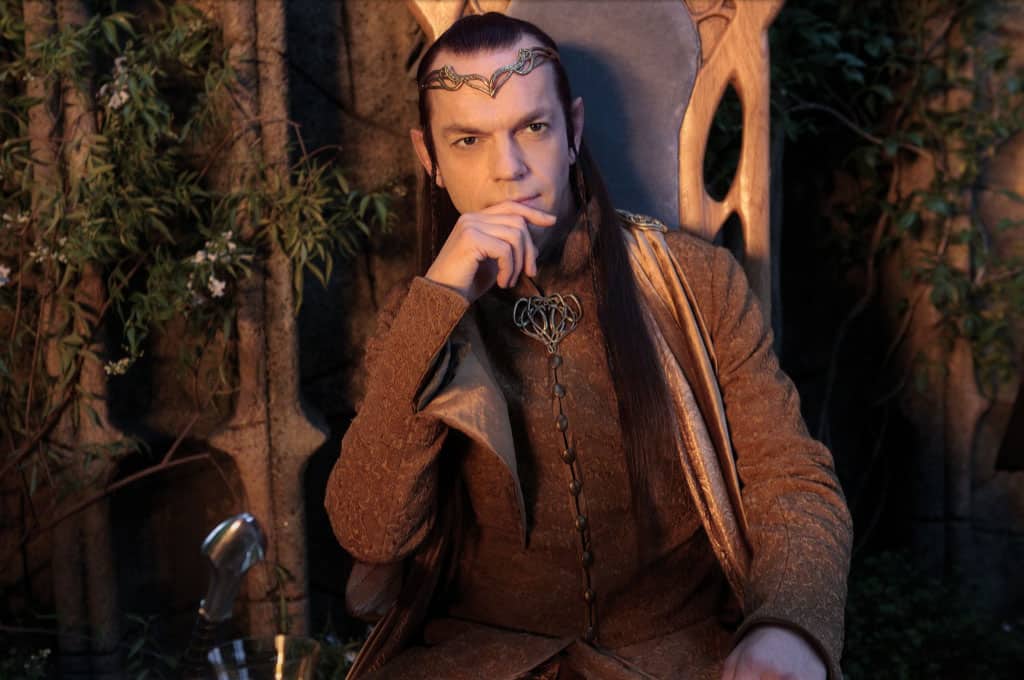 Like Elrond, the Rivendell elves were given more color and texture to their costumes. Dickson’s design was very indicative of something from the “Other,” so they had a different feel. The length of the costumes, from neck to hem, gives the elves a taller, more waif-like feel.

The Lady in White, Galadriel’s costumes are very long, flowing gowns of silk and beadwork. Dickson designed the sleeves to run around six inches longer than the actress’ fingertips. The neckline for the dress worn in the prologue had a wide cowl neckline, which elongated the shoulders. This style would be recreated several times throughout the film. The choice of fabric and the cut of the costumes gave the character an ethereal quality.

Gimli’s costume begins as a simplistic tunic over dark trousers. The tunic is given a squarish sort of embroidery which consists of interlocking threads on the shoulder pieces and the leather cross pieces over the chest. The sleeves are a light chain-mail which end in gauntlets. This kind of box-cut comes to signify the dwarves and give them a more utilitarian look.

Hobbits had, according to Dickson in an interview with Follow the Thread, an 18th Century “country” feel. She wanted to use a lot of the design, including frock coats and English waistcoats. Because the Hobbits did not wear shoes, their pants were almost half-pants, coming down to just above the ankles.

For the Hobbits, fabric choices included cotton velvet, cotton Velveteen, and soft leather. Off-white linen was used for the shirts and hemp cloth for the cloaks. The choices of fabric, paired with earth tones, created a different look for the Hobbits,  grounding them to the earth and nature in a very different way than the elves of Rivendell.

Frodo’s costume consists of rust-brown trousers with functional pockets, where he sometimes puts the Ring. X-backed suspenders hold his pants up and leather ends secure them to the garment. A linen shirt with pinstripe sleeves under a brown velvet vest give him a distinguished look. A tweed frock coat also separates Frodo from the other Hobbits, letting us know he is one of them but, perhaps, of a societal step up. 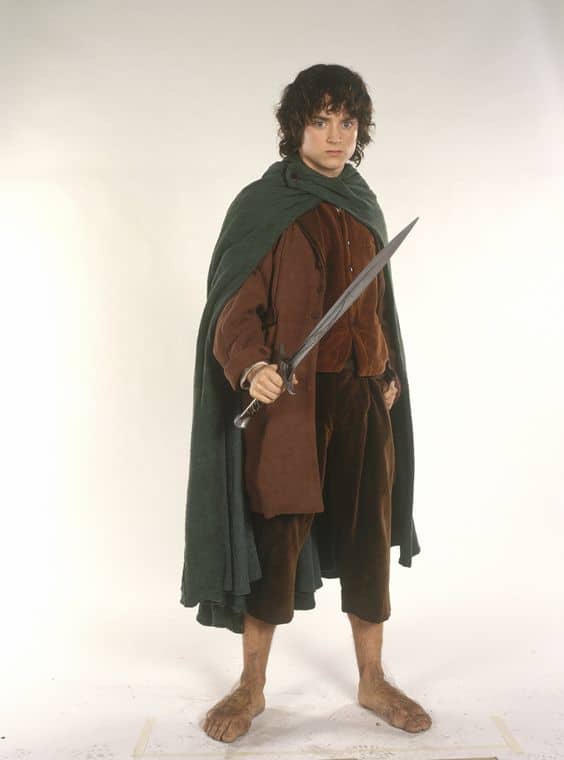 For Samwise Gamgee, the look was simplistic. When he’s discovered by Gandalf, he’s wearing a light-colored shirt, worn X-back suspenders, and a striped vest over dun-colored trousers. If one takes a closer look at the pants, they can see a patch over one knee. This, along with the six flat buttons (as opposed the domed buttons on Frodo’s vest) on Sam’s vest are telling details of his “every man” status. As the film progresses, a simple wool coat is added to Sam’s costume. 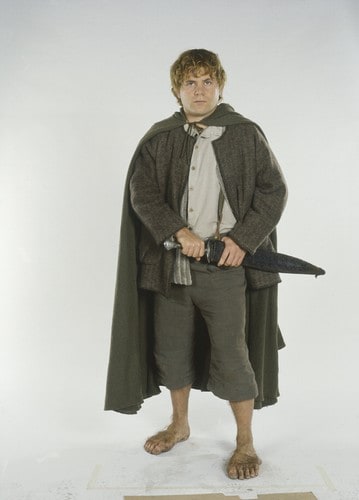 Two other Hobbits, Pippen and Merry, have some similarities of costume with Frodo and Samwise. Their color scheme is the same, dark olive greens and browns, and the soft rose brown, as well.

Pippen wears corduroy pants, the same X-back suspenders, and an off-white shirt. His has a band collar and is mid-thigh length with colorful embroidery down the center. This detail sets him apart from the others. He wears no vest but has a patterned scarf of green, gray, and purple.

Dressed in simple brown trousers and buttoned suspenders, Merry also has a simple white shirt with a cuffed end. Under his charcoal gray frock coat, he wears a yellow vest with a stippled-quilting pattern. This pattern creates a nice texture none of the other Hobbits share. He, like the others, wear a dun-colored, hooded cloak with simple tabs, until they receive their Fellowship cloaks and pins. 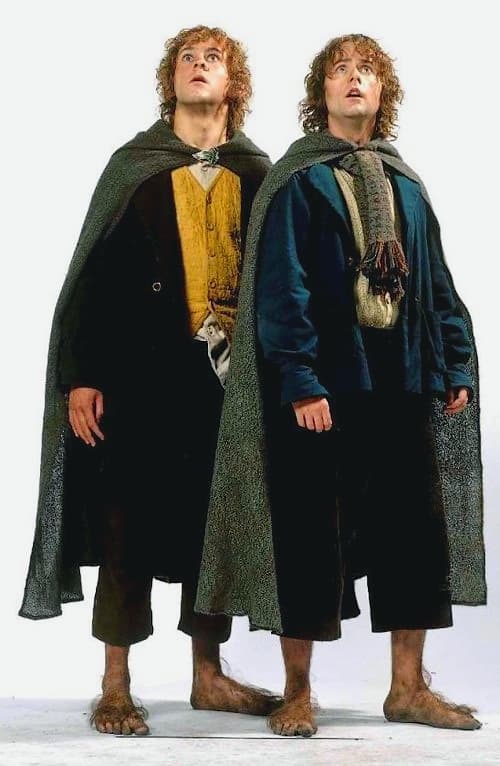 Aragorn, one of the lead humans, had a very detailed costume. Viggo Mortensen, who played the character, had a great deal of input on his costume. Dickson envisioned the Aragorn character as one of “great travel,” so the costume needed to reflect this. It needed to feel as though the character had lived in the costume, not just put it on for the film. Dickson made specific decision to make it a very dark licorice green which made it look black, under some lighting.

It’s basic concept was one of layers, starting with a fine, gray linen shirt with light embroidery around the neck, leather trousers, and tall, soft boots. It had a long, sleeveless jerkin over the top. The shoulder pieces had braided ties which looked as though they could come off in hotter weather. For colder weather, Aragorn wore a long duster of a heavier leather and a rolled-up cloak on his back. 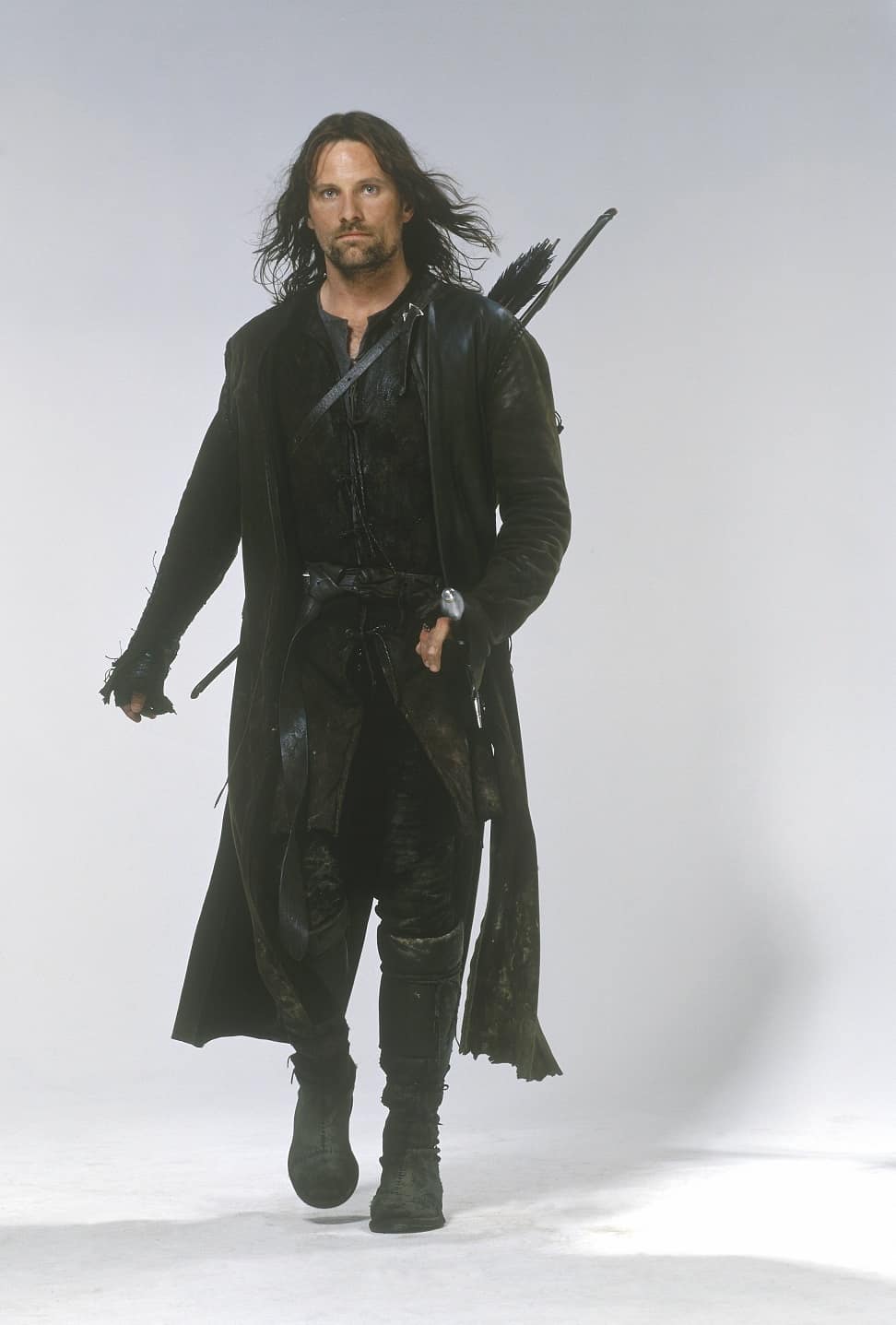 Dickson said, of the richer embroidery, Aragorn needed a “sense that he came from, or was given things which were much more regal.”

The Steward of Gondor, Boromir, wears just two simple costumes. Both are tunics, pants, vambraces, and boots. A gold clasp holds the cloak together. One of Boromir’s costume is a leather surcoat which comes to just above the calf. It’s sleeveless with ample arm openings with decorative trim around the edges. There is a black version and a dark green version, both worn over chainmail. A cloak is added to each version. It is made from etched silk and velvet and features a hood. It is longer than most others worn in the film.

The Wizards proved to be a different sort of challenge.

Dickson began with a woven cotton fabric for Gandalf. Over a three week period, an overdying process created a much more worn, older look for the gown, cloak, and hat. Some have said the color was a brownish-gray while on film, it looks like an even, pure gray. The gown is a simple design worn over baggy trousers. According to alleycatscratch.com, they were tagged in the wardrobe department as “culottes,” which are a shorter pant. Again, according to the same website, the pants had an elaborate embroidery design on their hem.

The cloak worn over the gown contains a bit of embroidery at the bottom portion. This gets lost in the “mud” applied, which was a suggestion by the actor, Ian McKellen, who played the character. He felt as though Gandalf would have travelled a lot in this costume and it would show on the fabric. 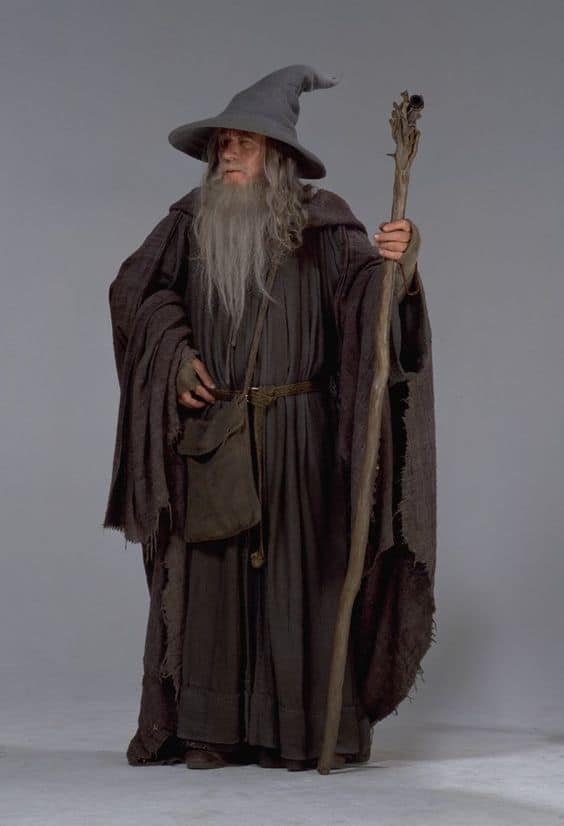 For Saruman, Dickson said she wanted him to have a kind of grandeur and “stature of an elf.” Because of the overall color palette of white, Dickson used silks and brocades to create texture, which would give it depth. The outer robe was a sleeveless piece with heavy embroider along its front. The under piece had a rolled collar of the same brocade as the piping on the outer robe. It also had long, flared sleeves of cream jacquard. A curious bit of trivia is, the sleeves are “the wrong side” of the fabric, which gives them a bit of a sheen and more of a cream color. He also wears a long belt made of pale gray, brown, and cream and looks like woven cords.

Outlaws and Drama: An interview with Derrick Weiford and Nate Taylor!
October 1, 2022