Spawn and Batman, Together At Last By spring of 1994, Image was on an unstoppable rise, and despite a few to-be-expected-from-a-new-company misfires, the entire industry was taking notice. How could it not? Naturally, this extended to the Marvel and DC, who could no longer afford to sit idly by and pretend this new, upstart company would be a flash in the pan that could be ignored. So while Marvel would eventually cede their bruised ego (after all, they were the alleged villain in the Image founders’ story, the Goliath to their David) and agree to cross properties over in joint-publishing ventures, it was DC who eagerly jumped first. And thus, the companies’ two biggest moneymakers, Spawn and Batman, would join forces.

Todd McFarlane, for his part, owed at least a partial debt of gratitude to Batman for his career. The artist had famously been tapped to quickly replace the departing Alan Davis on the art chores of “Batman: Year Two,” and despite only drawing three issues, his mark on the Dark Knight’s visual presentation was striking: McFarlane’s Batman was moodily draped in perpetual shadows, with an impossibly long, billowing cape that seemed to have a life of its own. He was an almost inhuman creature of the night, less a man and more a thing to be feared. If that sounds familiar, it should: the same visual DNA McFarlane used with Batman was transplanted to Spawn – and as a bonus, he included a clownish adversary for good measure. That’s not to imply that McFarlane deliberately swiped anything from Batman; far from it: the characters are vastly different in just about every way. Spawn kills, Batman doesn’t. Batman is also debonair playboy Bruce Wayne; Spawn lives in an alley. Batman’s morality is always above reproach; Spawn is a quintessential ’90s anti-hero and all that entails.

But needless to say – Spawn was a cash cow, and despite the fact that the Batman franchise was riding high in the wake of “Knightfall,” DC saw an opportunity and went for it. The joint publishing venture resulted in two distinct crossover comics, one published by Image (Spawn/Batman) with Frank Miller and Todd McFarlane heading up the creative team, and the other published by DC (Batman/Spawn, naturally, with the subtitle “War Devil”) with a creative team of Chuck Dixon, Doug Moench, Alan Grant, and Klaus Janson. The latter’s three writers represented the core Bat-writers at the time; Janson was tapped for pencils and inks to give the project a bit of old-school luster. 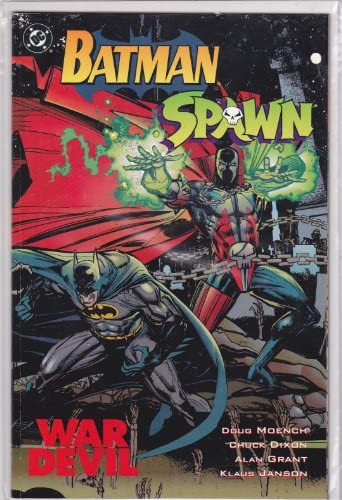 Readers, though, undeniably preferred Image’s contribution. Although both sold like hotcakes, the DC creative team couldn’t help but feel creaky and out of step with the Image zeitgeist; the DC approach to superheroics couldn’t have felt more different than Image’s down to a molecular level And by no fault of Janson’s, his Spawn simply couldn’t touch the hem of McFarlane’s Spawn’s (majestically flowing) cape. DC’s bid for old-school respectability backfired, resulting in a comic that feels like it fell utterly short of meeting its expected moment.

Miller and McFarlane, though, really couldn’t do anything but shine. Miller, still riding high off of Dark Knight Returns and Batman: Year One had recently unleashed Sin City on an unexpecting world, and was pretty much untouchable at that point in his career. And McFarlane, of course, was having his own moment in the spotlight thanks to Image’s skyrocketing success (a moment he would continue to juice later in the year by launching his own toy line, Todd Toys). Together, they devised a story that, if not necessarily all that deep, absolutely sated fans’ needs to see Spawn and Batman hanging out, fighting, and doing the butt-kicking thing together. Not exactly a tall order, but it was McFarlane’s pencils that made the whole thing look cool and feel special: 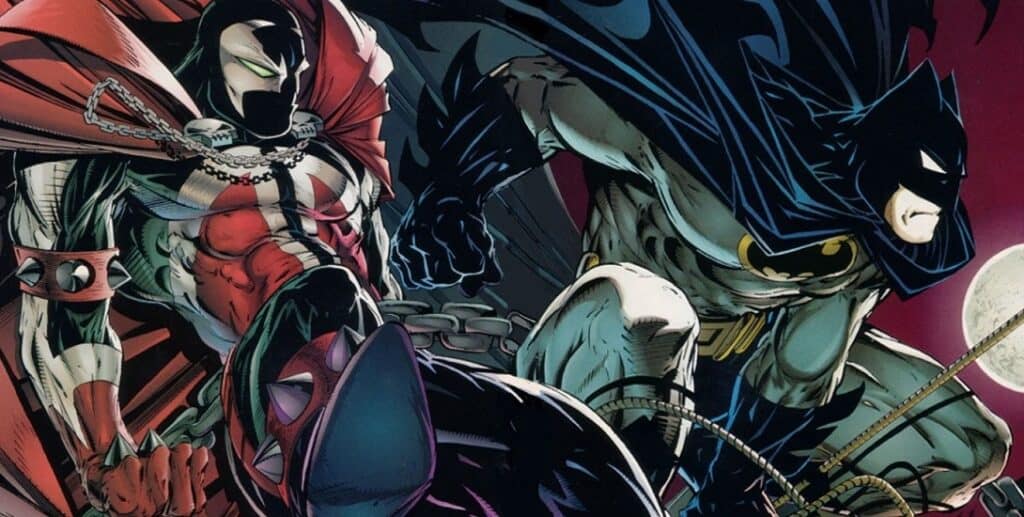 So what if the story was paper-thin? Image was all about the art, and Spawn/Batman delivered on that ethos in spades. What Miller and McFarlane inherently understood was that simply watching Spawn and Batman interact (read: fight) was what fans wanted more than anything else. It was the sheer visceral thrill that mattered. And in that, they absolutely succeeded.

In the years to come, Image would be awash in crossovers with other characters from DC and, yes, Marvel. As the comics industry entered the mid-’90s and the collector’s bubble began to burst, these types of inter-company crossovers became a short-term license to print money, and were cranked out with such regularity that they no longer seemed all that special anymore (honestly, it’s pretty hard to take Supreme/Gladiator with any level of credibility). But for one shining moment in 1994, the possibilities still seemed new and fresh. 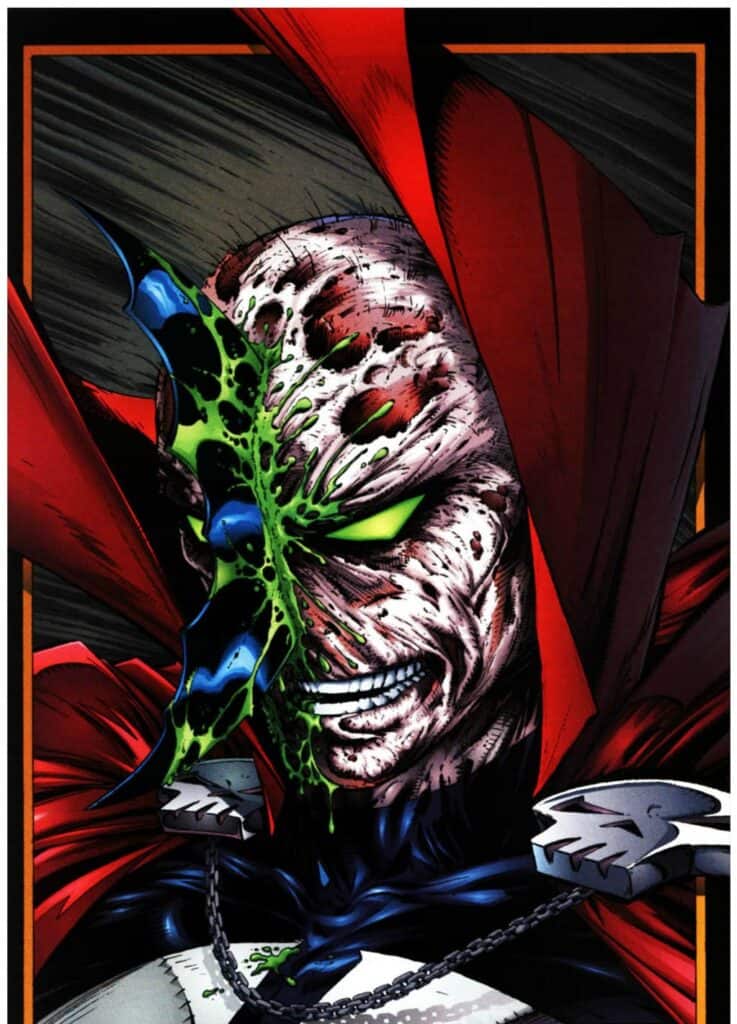 But elsewhere at Image, there were signs of growing pains. WetWorks at last debuted from Whilce Portacio, making him the final Image founder to roll out a solo comic. Unfortunately, the comic landed with a thud; an eighteen-month wait between the initial series announcement and the first issue due to the sudden death of Portacio’s sister didn’t help matters. But it was also, simply put, not a very original comic. The problem with taking artists and trying to turn them into writers had always been somewhat apparent at Image from the get-go, but with WetWorks, it was blatant: the comic was yet another about soldier-types with rippling muscles, big guns, and zero personality. That these soldiers fought werewolves and vampires wasn’t enough to distinguish them from the crowd; the series limped along until 1998 before being shuttered. That the team was woven into the WildStorm universe didn’t seem to help with its popularity; WildStorm itself would have no trouble evolving and growing without it. 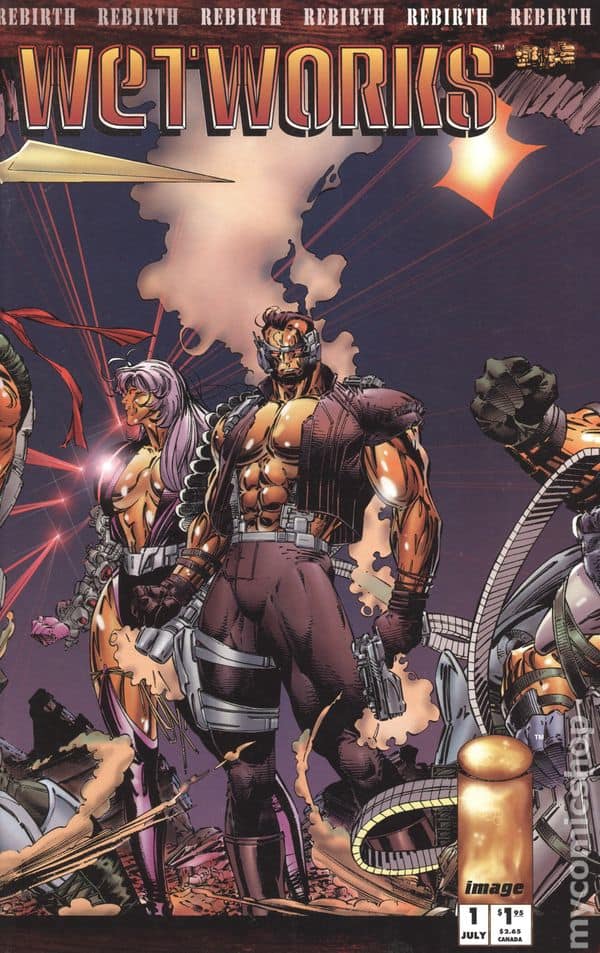 Then, in June, came a wave of cancellations that became known as the “Image Purge.” Keith Giffen’s Trencher, Mike Grell’s Shaman’s Tears, parody comic Stupid, and Larry Stroman’s Tribe all got the axe due to low sales. Although not indicative of anything cynical or sinister in particular, it is noteworthy that at least two of those cancelled titles were the brainchildren of old-school Bronze Age creators Giffen and Grell, who were apparently trying to groove with the new generation but were out of sync from the start. Either way, both titles flopped. Many of Image’s detractors saw this wave of cancellations as a bellweather of the company’s demise. Clearly, they were wrong.

Finally, September of 1994 saw the disastrous Image X-Month, in which each of the founders swapped books with others: 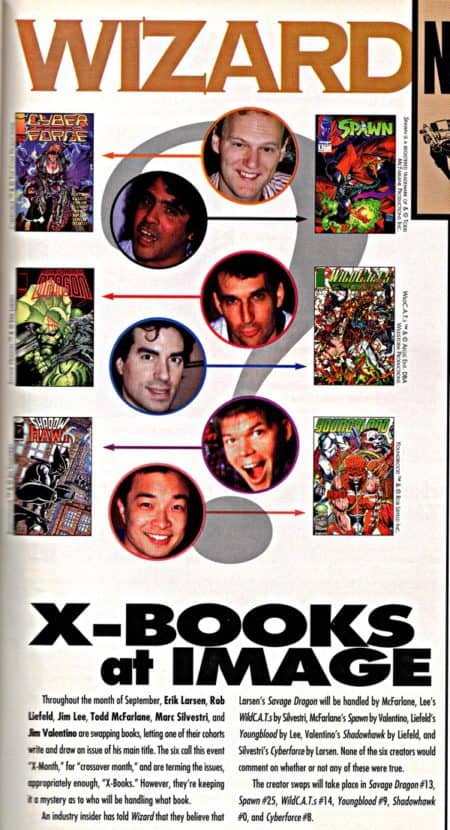 The hype was there, but there were immediate logistical problems that stemmed from the founders keeping which books they would be working on top-secret. The idea was to generate hype for all the books, but instead, retailers had no idea what quantities of which issues to order, causing a nightmare on the ordering side of things. In the end, it was a fun idea, but ultimately one of fluff that traded on the idea that the creators’ names themselves would be enough to carry the day. And that might have been true, if they’d actually told anybody which books they were on. Thus, Rob Liefeld on ShadowHawk or Jim Lee on Savage Dragon didn’t wind up mattering at all in the long run. Excess copies of the X-Month books can be found in just about any dollar bin at a given comic shop anywhere. Oof.

But as 1994 slowly rolled toward 1995, things were happening at Image that would ultimately wind up changing the company’s trajectory… permanently.

NEXT: Things get absurdly cheesecake up in here as Gen 13 debuts!