As Scottober came and went, Scott Snyder and frequent collaborators like Greg Capullo, Francesco Francavilla, and Francis Manapul launched a series of titles through a partnership between Snyder’s Best Jackett Press and Comixology Originals. The three titles out of the gate – We Have Demons, Night of the Ghoul, and Clear – were all strong outings for the respective teams that felt in line with the creatives behind him. Now, Snyder has paired with three new artists to present wave two of Best Jackett Press, bringing new genres and storytelling sensibilities to Comixology this Scotturday.

Canary #1: The Hills Have Eggs 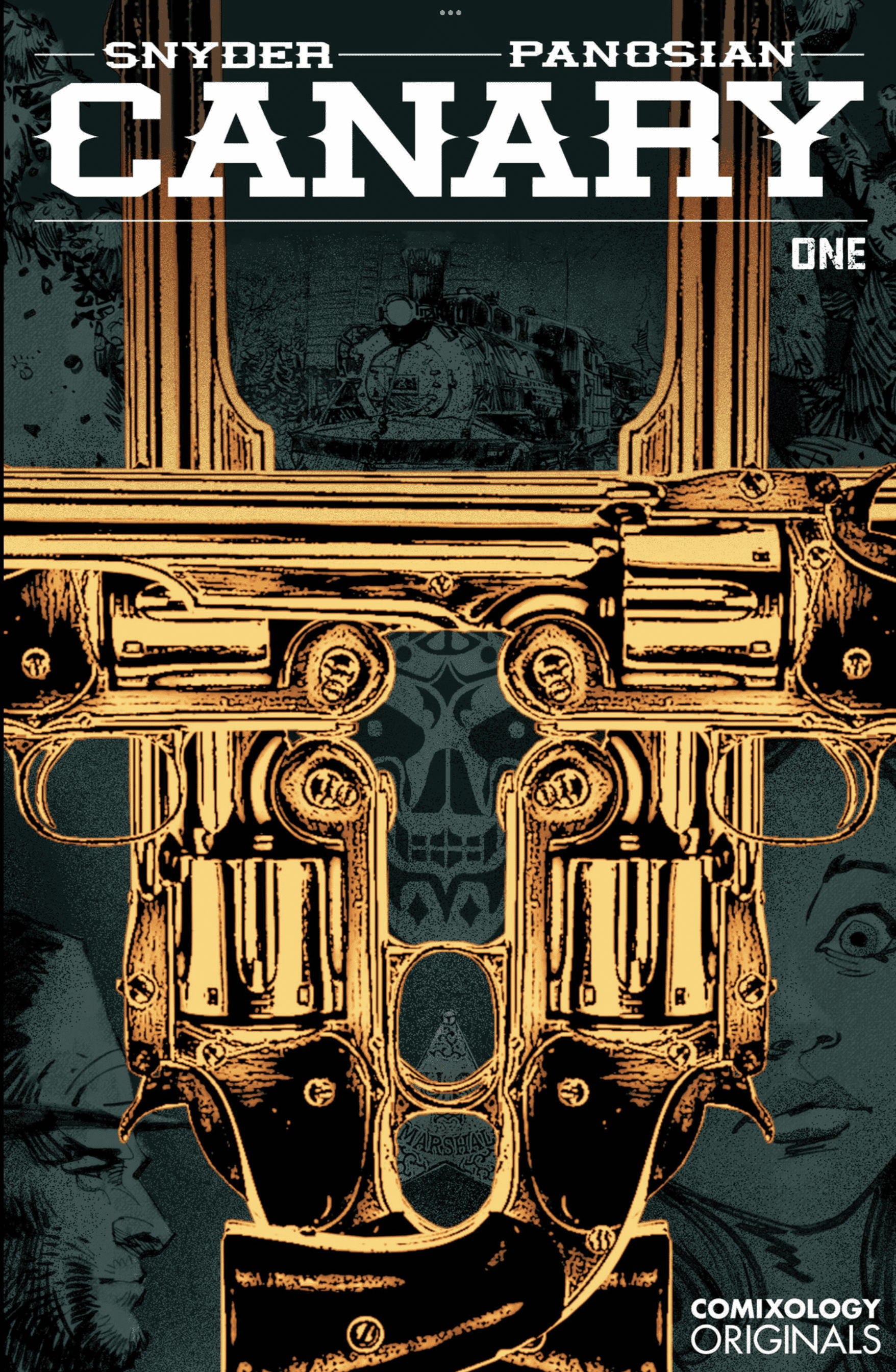 The first series from this wave of titles is Canary #1, written by Snyder, with art and colors from Dan Panosian, and lettering by Richard Starkings. The story follows Marshall Holt, a U.S. Marshal, and dime novel hero as he investigates a series of strange murders throughout the Western U.S. A child is the culprit of the killing that opens the issue, inspired by a monster egg found by his school teacher. The script bounces between the investigation of this murder and a previous case Holt was working on, which involved a murderer named Hyrum Tell, a man who seemingly has a throat lined with teeth. Snyder wastes no time establishing the genre twist to this seemingly straightforward western, revealing the horror of chattering teeth in the confrontation with Hyrum, and then catching up with the child, who describes a monster lurking in one of the eggs from his teacher’s lesson. It appears that this story unfolding is a weird west tale, and is a compelling opportunity for Snyder to work in horror once again.

Snyder’s script is solid in this first issue, but it’s Panosian’s art and coloring that sells the book. The linework has a sprawling and controlled aspect to it, giving a sense of scope and atmosphere to every page, channeling the cinematograph and visual language that makes westerns so iconic. What’s astonishing is that Panosian can do so in a setting less common for westerns. Instead of vast, endless deserts and gorges, the audience is treated to Utah in what appears to be Autumn, with plenty of forests and green plains. That texture that Panosian gets to play with, mixing the greens and browns of falling leaves and endless grasslands with the harsh red/orange hues of a seemingly always setting sun evokes that western palette while signaling something is different. The art and coloring are hauntingly beautiful, and like any good western, sear into the brain.

Barnstormers #1: A Flight Risk, Without a Fear of Fallin’ 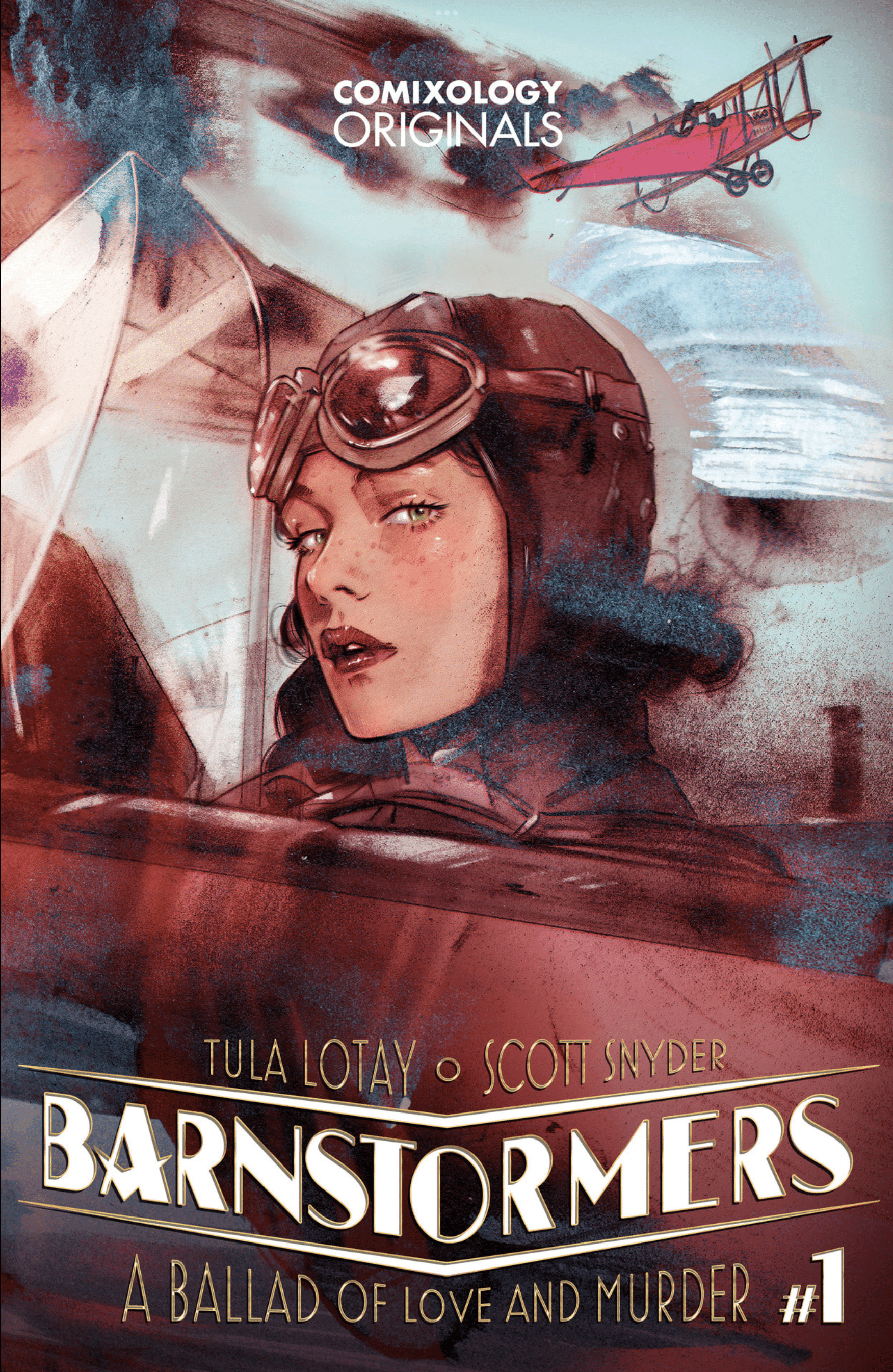 The second title of what we’re dubbing Scotturday is Barnstormers #1, written by Snyder with art by Tula Lotay, colors from Dee Cunniffe, and letters from Richard Starking, which follows in the footsteps of Canary, as a story in another place and time. Here, instead of the old west, the issue unfolds across 1927, following Hawk, a pilot barely scraping by after the war, as he’s forced to take up barnstorming to fund his cross-country travels. His flight and performance don’t go as planned and crashes into a wedding, inadvertently getting kidnapped by the bride who’s looking for an exit strategy.

Just like in Canary, Snyder wastes no time setting up and then subverting the genre and premise of the story, as the sky-bound romance turns into a pulpy sci-fi revenge story, with Hawks revealing an automaton he encountered during the War (World War I to be exact) is chasing him. It’s an excellent twist that builds on the already excellent historical fiction angle and makes for a compelling throughline. Snyder’s prose writing skills get to shine in this issue, which feels closer to works like A.D. After Death, which was less a traditional comic and closer to an illustrated serial short story.

Barnstormers is a comic with clear sequential storytelling, but the prose gets to shine when it escapes caption boxes and settles in the background coloring. Snyder’s smart enough to make sure that Lotay’s gorgeous art and Cunniffe’s romantic colors are never obstructed. Lotay brings a romantic, painterly quality to the issue, with art that feels like it belongs on the covers of a swashbuckling romance novel. She gets the chance to stretch some horror imagery with the automaton, but almost immediately it returns to the picturesque layouts and rendering. The world is just so lush, and inviting, encouraging readers to just drink in the details that at first glance seem simple. When Lotay gets to shift from sequential compositions and give larger panels paired with the longer prose excerpts, the book sings, matching Snyder’s flowing language with sequentially captivating images. Cunniffe’s colors go perfectly with Lotay’s style, capturing beautiful blue skies, harsh burning oranges, and stunning grayish fog that just elevate the art to a whole other level. Reaching the end of Barnstormers 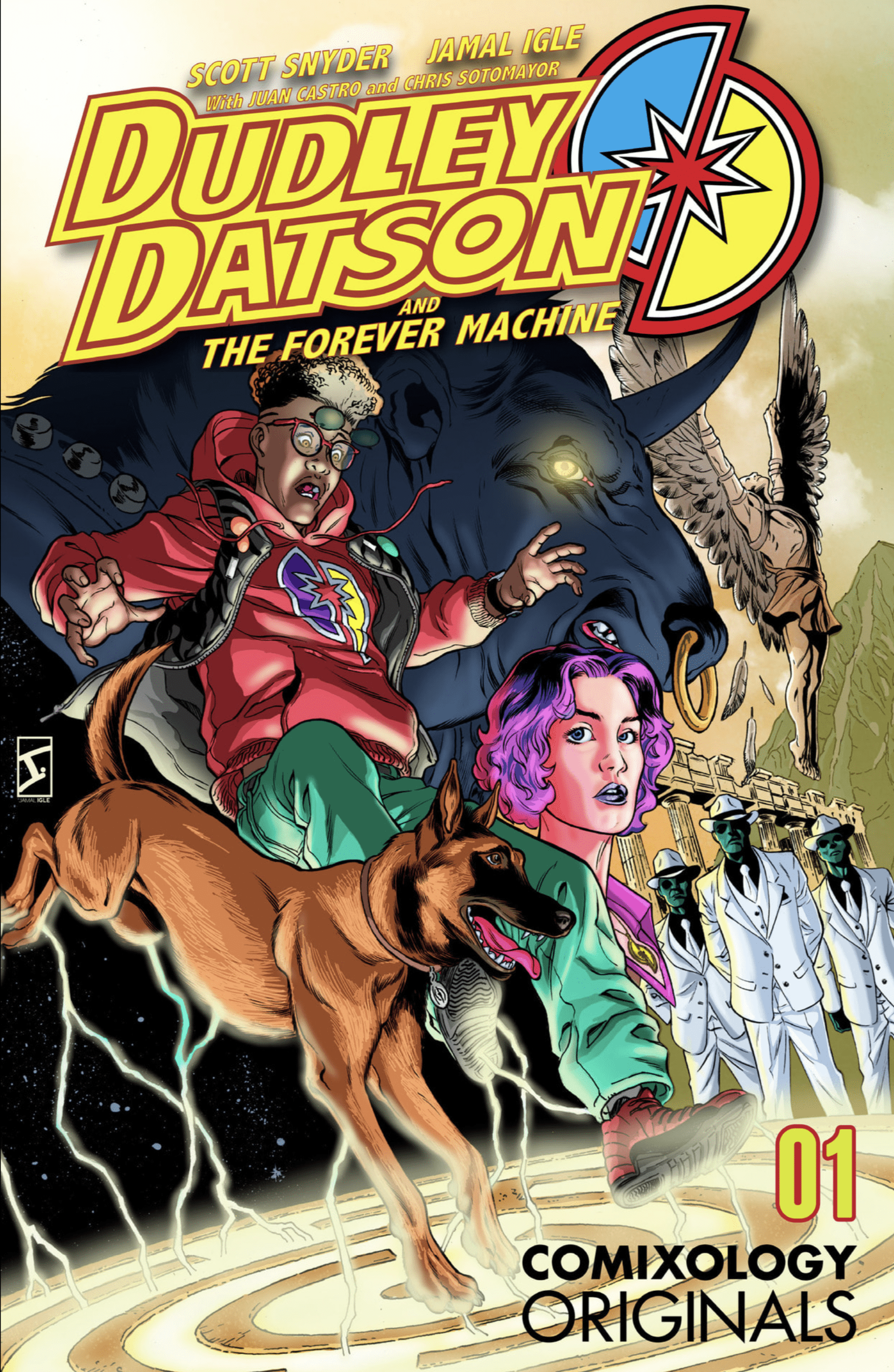 Dudley Datson and the Forever Machine #1 – written by Snyder with pencils from Jamal Igle, inks by Juan Castro, colors from Chris Sotomayor, and lettering from Tom Napolitano – is the most straightforward of the three books but it is also the weakest. The book focuses on Dudley Datson, a young but brilliant inventor with a sick father. Dudley invented Duds, a smart fabric made up of woven led threads. After his father misses the inventor’s showcase due to health issues, Dudley decides it’s time to put off science and goes to the lab to quit, before seeing his mentor being attacked by armored goons. Things go sideways fast, and Dudley is given a McGuffin that promises to play into the book’s metaphor for growing up.

Multiple times in the issue, Snyder’s dialogue or captions work to over-explain information that could be shown, like having a character clearly explain they’ve been best friends since the fifth grade. Snyder and team are working this story as a YA (Young Adult) riff on Fantastic Four/Challengers, but unlike the other two number #1s, the lack of genre twist hurts the issue, as it doesn’t have a chance to zag or surprise the audience. Snyder seemingly gets too roped into the idea of a YA story, and it shows in that exposition as it’s clear the script doesn’t trust the reader to infer the little details. Hopefully, with the table setting of the first issue done, the dialogue and exposition will feel a little less forced in subsequent issues.

Igle’s pencils are the most typical of the three books, feeling like they would slot perfectly in a Marvel or DC line-up. Faces and proportions are fine and consistent, but the takeaway is there’s nothing that particularly sticks out from the issue. Whereas Canary and Barnstormers both have distinct styles that evoke the genres and tones they’re playing in, Dudley Datson falls flat, seemingly a generic YA story about a young person getting a MacGuffin that will help them accept the harsh reality of adulthood. Hopefully, now that the team has passed the first hurdle and thrown Dudley into the world of super-science, the art will match the pace and get the chance to stand out against the YA field. (Igle does get major points for rendering such a consistent and fun looking corgi throughout the issue. More panels of them in the future, please!)

All three series can be purchased through Comixology or Amazon Kindle, or read for free with a subscription to Comixology Unlimited.