Welcome to “The Pope’s Comics,” our new regular column by award-winning novelist, poet, and Comic Watch contributor Bethany Pope! Bethany brings a wealth of knowledge on literature, LGBTQIA+ issues history, gender, comics, and so much more. We sincerely hope you enjoy!

Over the next few weeks, I’m going to be examining the mythology of comics, specifically through examining the ways that various characters fit our understanding of what constitutes a myth. Comics are our modern mythology, after all, and superheroes are what we have in Western culture instead of an active pantheon of gods. This column, and the ones that follow, are not intended to denigrate any active religions, but rather they are a way of understanding how a psychological pattern, which has existed within our species as long as we have, manifests within contemporary western culture. In other words, although mythology is inherently connected to religion, there is a difference between an active faith and a myth.

This series is going to be about mythology, but I will be avoiding characters who were intentionally based on mythological figures — at least for now. Thor and Loki are off the table. So is Hercules. This is because such characters were intentionally patterned off of gods, and therefore their evolution was not an organic process. They were intentionally shaped copies of myth. They didn’t evolve over years or decades as a function of natural human psychology.

I will be analyzing these characters using a pattern taken from a book titled The Hero: A study in Tradition, Myth and Dreams, by Lord Raglan. Raglan was a sociologist whose work was later popularized by Joseph Campbell, author of The Hero With A Thousand Faces, and it is incredibly useful for seeing how a character relates to an archetype.

I’ve included an empty copy of the index here:

As you can probably imagine, many mythological figures fit comfortably within this matrix. Theseus, the man who fought the Minotaur, scores twenty points. King Arthur lands at a comfortable nineteen. Harry Potter scores six, which isn’t high, but other popular modern characters score much higher.

The language of the index is sexist, so I will make adjustments when analyzing female or other Non-Male characters. I am posting it as written for this first essay so that you can get a feel for my process.

In this column, I am applying the Hero Index to what is possibly the most popular, well known subject available, the Man of Steel himself: Superman. I will only elaborate on the entry numbers which align with his mythos. 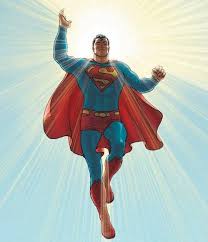 Superman’s father is not a king, in the traditional sense, but at the time of the character’s conception (heh) Science was reigned supreme in the public consciousness. Indeed, Superman was born when one of his creators (Jerry Siegel) wrote a story titled “The Reign of the Superman” in which an evil scientist injects a homeless man with a fantastic serum which enables him to develop powers. The fact that Scientists often served the role of Wizard or King in the fiction of the 1930s and beyond flavors the development of Superman as a variety of modern, secular Christ figure (or as Joseph Campbell would have it: Dying God) one whose wise father ‘sent him down’ to earth where he fights for the redemption of mankind. This is doubly appropriate, given the fact that the veneration of Science began shifting Christianity out of the picture in the 20th century.

I would say that falling down from earth in a sort of cosmic escape pod and being adopted by a pair of Midwestern American farmers qualifies, yes. 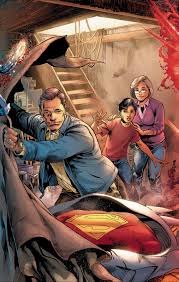 Beyond the comparisons that are often made between Jesus and Superman, and there are many (I just made one myself), Superman is often compared to a god in the text. Batman refers to Clark as a god many times.

I mean, his planet exploded. That wasn’t directed at Kal-El personally, but it’s difficult to argue that it didn’t almost kill him. Compare this to the way that the goddess Hera pursued the infant Dionysus, immolating his mother and setting literal armies against him. Moses also dealt with an early attempt on his life. Heroes, gods, all of these mythological figures must be threatened, and triumph, early, because this is what sets them aside for the reader from the common swell of man. This early threat is what pushes them into the golden liminal space of myth. Presenting Clark as the lone survivor of the explosion of Krypton was a fantastic way of going about it.

The image of a baby, floating alone through the emptiness of space, blind and protected only by a high-tech rush basket, is incredibly powerful. I’m not in a position to speak about Siegel and Shuster’s Judaism, but the image definitely echoes the story Moses. It also resonates with the story of Perseus, who was set adrift with his mother Danaë in the Aegean sea, sealed inside of a trunk. Danaë’s father, fearing a prophecy that he would be deposed by his grandson, locked his daughter in a cell so that no one would seduce her. This drew the attention of Zeus, who appeared to her as a shower of gold that pooled in her lap. Nice, sexy image, that. After Perseus and Danaë were pulled from the water by a passing fisherman (low ranking people like farmers, hunters, or fishermen are a common part of this myth pattern) Perseus performed many acts of heroism before eventually marrying a princess and ruling his adopted country. It was sort of a benevolent version of the Injustice series, is what I’m saying. 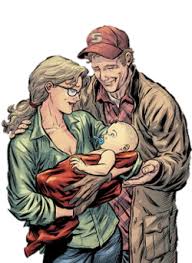 When Clark reached adulthood, he left for Metropolis, and his double life. Metropolis is his “kingdom” in the sense that he loves and protects it. The planet Krypton has also featured in his story, many times.

I can’t list everything or we’ll be here all day. 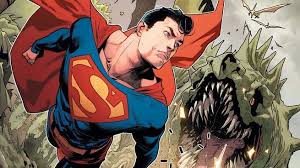 In the current continuity, Superman is married to Lois Lane. In many stories, marriage is the end, but one of the ways that you can tell if the story you are reading falls into the category of myth is if the marriage is only a brief stop, or a deviation from the usual status quo. If a marriage serves, over the long term, to detract from the story, you are either reading a myth or watching a soap opera. See also: Spider-Man selling his marriage to the literal Devil in order to return to an adolescent state under the care of his aunt. As someone who is married and who is trying to lead what a Jungian psychologist would describe as a heroic life (a life that is fully engaged) this presentation of marriage would be worrying, were it not for the fact that marriages in myths are symbols of completion and one cannot be ‘complete’ and fully alive. Life is by definition a state of constant change, and a complete thing can change no longer. Comics, being our modern mythologies, are very much aware of this, which is why marriages featuring main characters (almost) never last.

Superman is the most famous superhero in the world. How much more king-like can you get?

In the 90’s his popularity dipped, a fact that led to an event which we will talk about in a moment. There have been many stories (often set in an alternate reality) where the people of Metropolis turn their backs on the man of steel. There have been many stories in which Superman fights Batman, an event which always symbolizes a sort of holy loss of favor, often due to Clark turning his back on The Law.

This is usually the point where he retreats to the Moon or his Fortress of Solitude.

Now, it’s difficult to argue that being slaughtered by Doomsday equals dying a mysterious death, but I’m going to try anyway.  From the perspective of the fictional people of Metropolis, the death of someone with the powers of a god would be very mysterious. For the audience of readers, the whole selling point of the event was the mystery of what (or who) could possibly murder a god. The answer, of course, was Doomsday, which has a nice, apocalyptic feel to it. 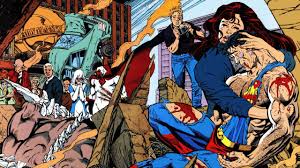 The hilltop, in mythology, symbolizes the liminal (that word again) space between Heaven, or the realms of the gods, and earth. It’s also a vantage point where a great many people can witness the death. I would argue (indeed, I am arguing) that a city center serves the same purpose, in our collective imagination, as the top of a hill. It is, after all, the place where announcements and proclamations are made. It is, if you look at places like Times Square, a halfway point between what we think of as the real world and the realm of illusions and other beautiful dreams.

Although Superman’s body was originally buried in a crypt, it didn’t stay there very long.  A villain known as The Eradicator, pulling a common mythological move (see also: the journey of the head of Orpheus) stole the corpse and placed it in a Kryptonian Regeneration Matrix, a MacGuffin designed to serve the role of the sacred Ambrosia Demeter used to grant mortals immortality. 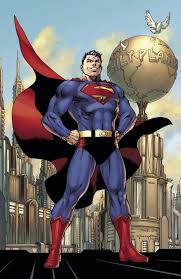 How many statues of Superman have we seen in the text?

Superman’s Hero Index Score: 16. Superman scores below figures like Perseus (18) and Moses (20) but he scores above Zeus (15), Robin Hood (13) and even Alexander the Great (6). In any case, it is impossible to argue that Superman is not a member of our modern pantheon. Hopefully this breakdown will illuminate part of the reason that the character is so popular. The world has always needed heroes. 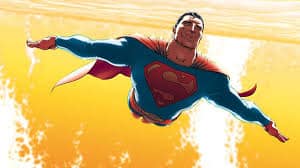