Welcome back to “The Pope’s Comics,” our new regular column by award-winning novelist, poet, and Comic Watch contributor Bethany Pope! Bethany brings a wealth of knowledge on literature, LGBTQIA+ issues history, gender, comics, and so much more. We sincerely hope you enjoy! 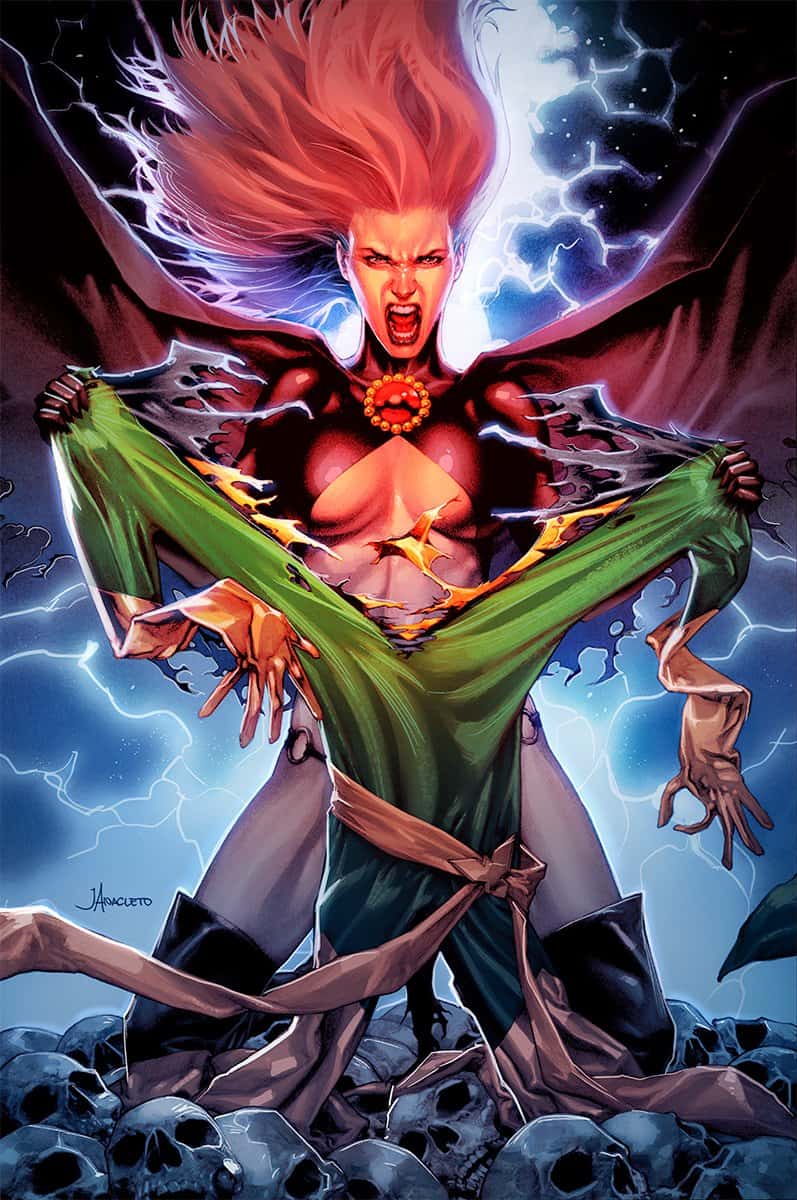 At first blush, The Goblin Queen might seem an odd choice for an essay dedicated to unpacking the heroic mythological elements in modern superheroes, but it’s important to note that the definition of what constitutes a ‘hero’ has shifted dramatically from its early Western origins. For the ancient Greeks, a ‘hero” was someone (often touched by the gods) who committed great acts. While most classical heroes were generally benevolent, they were also capable of occasionally horrific acts. Think of Jason and what he did to Medea (more on this, later). Greek heroes often had what modern mythographers term a ‘fatal flaw’, one that brings about their eventual destruction.

Indeed, that destruction is baked into the index devised by Lord Raglan for the classification of myths. Viewed from a classical perspective, rather than through a Judeo-Christian lens, Madelyne is more of a ‘hero’ than almost any Marvel character.

As I said last week, this classification structure that I’m using is based upon The Hero: A study in Tradition, Myth and Dreams by Lord Raglan. Here’s a run-through of the structure.

While discussing Maddy, I’ll only use the entries which directly apply to her story. The language of this structure is emphatically sexist (it would be surprising if this weren’t the case, given the era in which it was composed) but I will correct for this in my analysis. Once again, I’m not bashing Christianity, or any other religion, in this essay. I’m merely drawing a distinction between one understanding of morality and another.

Pryor is a clone of Jean Grey, the queen of the X-Men. Pryor was conceived in a test tube and no sex was involved. At the time that she was cloned, Jean was a virgin. Virginity is always a tetchy subject, since it’s a social construct whose measure shifts according to the culture of the people within it, but if we’re looking at Comics Code-era Marvel, yeah, sex of any kind but the most subtextual was off the table completely. Interestingly, given the facts of Pryor’s conception, she is a variety of double-virgin birth. According to medieval Catholic tradition, not only was Christ the result of a virgin birth, but so was Mary. I bet you never thought that you’d read a serious argument comparing The Goblin Queen to Jesus Christ, but there you go. These psychological patterns are so wound into our understanding of our culture that they’re almost impossible to escape.

Maddy’s “father” is Nathan Essex — the geneticist known as Mr. Sinister, a man so interested in cloning that he generated an entire society, which he ruled, composed of cloned versions of himself.

If we take “near relative” to mean someone who is genetically connected to the hero’s mother, some versions of Sinister (clones are fun) implanted himself with samples of Summers/Grey DNA. He also ran the orphanage where Scott Summers grew up. The fact that he raised Scott makes Sinister something like Jean’s father-in-law as well as Maddy’s father.

I would say that being cloned in a lab qualifies as “unusual,” yes. 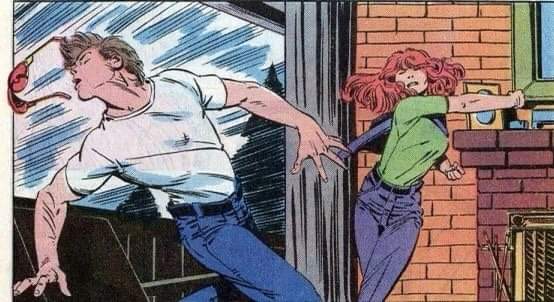 Energy from the Phoenix Force (the Marvel deity of death and resurrection) brought Madelyn to life, serving as a sort of third parent — a position which positively thrums with mythic importance.

Sinister abandoned Maddy as a failed clone and left her to drown in her cloning matrix.

Madelyne was sent to Alaska, to work as a pilot for Scott Summers’ grandparents.

Maddy had no childhood since she emerged as a mature adult. All of her memories were implanted by Sinister. Since this is the case, it’s not particularly surprising that we know nothing about her girlhood. 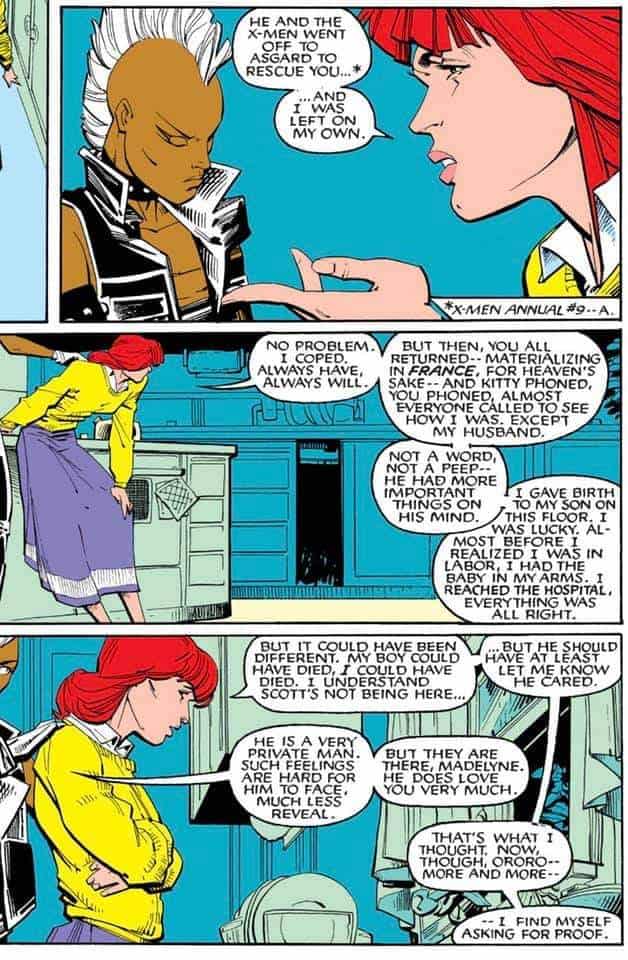 Madelyne meets Scott Summers and, after a time, was brought into his life. Eventually Madelyn became central to the life of the X-Men.

Maddy was brought to Asgard with the rest of the X-Men. She was given healing powers and became the lynchpin of their victory.

After eventually establishing her differences and independence from Jean Grey, Maddy and Scott married. They quickly had a child.

While the X-Men were stationed in Australia, Madelyn became one of the team’s leaders, despite her apparent lack of powers.

During Scott’s “retirement” from the X-Men, Maddy was the monarch of her own life. She had a child, a career, and was depicted as being in a generally happy relationship.

Madelyne was presented as a feminist. She had a career of her own which she was unwilling to give up after having a child. Madelyne set boundaries with Scott, and enforced those boundaries. She was probably one of the most morally and psychologically healthy characters in the series, for a time.

Scott returned to Jean Grey the second she reappeared in the books, returning to her like a dog to his vomit, or Jason, fleeing Medea for the more prominently powerful daughter of the King of Corinth. Scott (like Jason) presented this action as being within his moral right. There’s a great deal of similarity between these stories, honestly. Jason left Medea after ‘fulfilling his duty’ to her by presenting her with legitimate children. Scott returned to Jean because he ‘loved her first’ and, for him, the earlier promise took precedence over the latter. Of course, Scott also took the child he’d fathered. He presented this child to Jean Grey, who claimed full parental rights, pushing Madelyn in every way out of her position. This betrayal was later compounded when Jean ‘inherited’ all of Maddy’s memories. Claremont knew exactly what he was doing with this story, as you can see from the horrific dream sequence posted below. 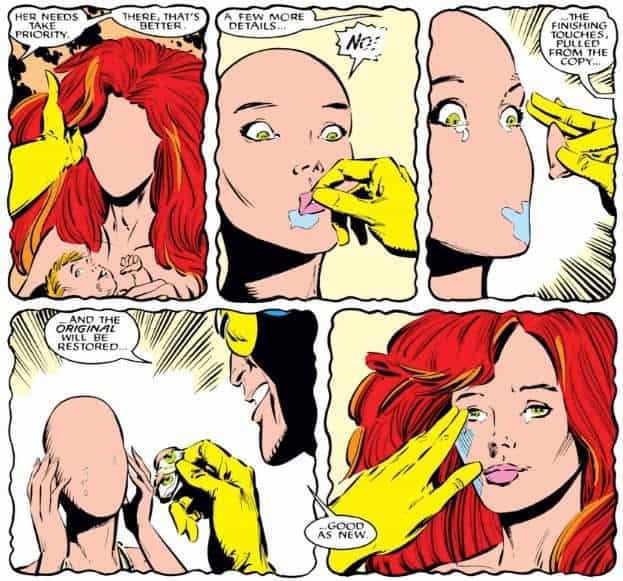 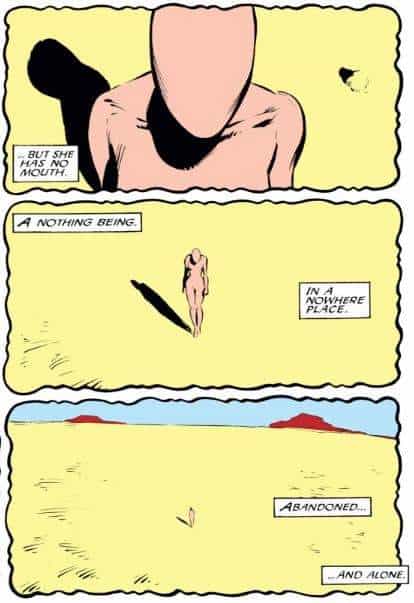 It’s interesting how the editors influence these modern myths. Because Scott Summers was meant to fill a Judeo-Christian definition of what it meant to be a hero, his abandonment of his wife and child had to be retroactively justified. Maddy’s entire ascension into the role of Inferno big bad was created as a means of reframing Scott’s treatment of her. However, fan reaction shifted this intended interpretation into the framework of pre-Christian tragic myth.

During the events of Inferno, Madelyne intentionally commits psychic suicide in an attempt to draw Jean with her into death. Her reasoning makes sense, after all, Scott has taken everything from her and given it to Jean. Why shouldn’t she also take the rest? 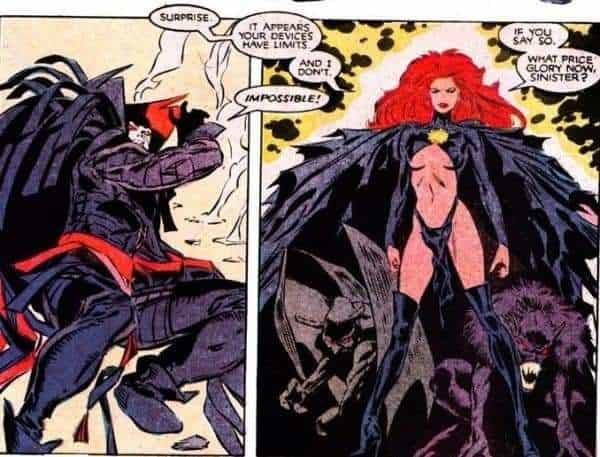 As I said in my article about Superman, in the modern world, a city center serves the same mythological purpose as the top of a hill. It is a visible liminal space, caught suspended between the heaven of our collective imagination and the common soil. Maddy’s death, in the middle of New York, was highly visible to everyone.

Madelyne’s so was not only removed from her custody, twice, he was removed from the books. Nathan Summers contracted a techno organic virus and was therefore sent into the far future where he remained until he was either (originally) well into adulthood or (the current era) a late adolescent. The fact that Madelyne, in her “madness” and grief, attempted to murder her son was a further reflection of the Medea myth. This betrayal caused Nathan to sever all connection with her and view Jean as his natural mother.

Madelyne Pryor scores 21 points on this scale, falling between Moses (20) and Krishna (22). Because this index classifies heroes on the level of myth rather than Judeo-Christian morality, Madelyne attains a higher level of recognition than one might originally suppose. Hopefully this essay will lead to some level of reevaluation of the character.