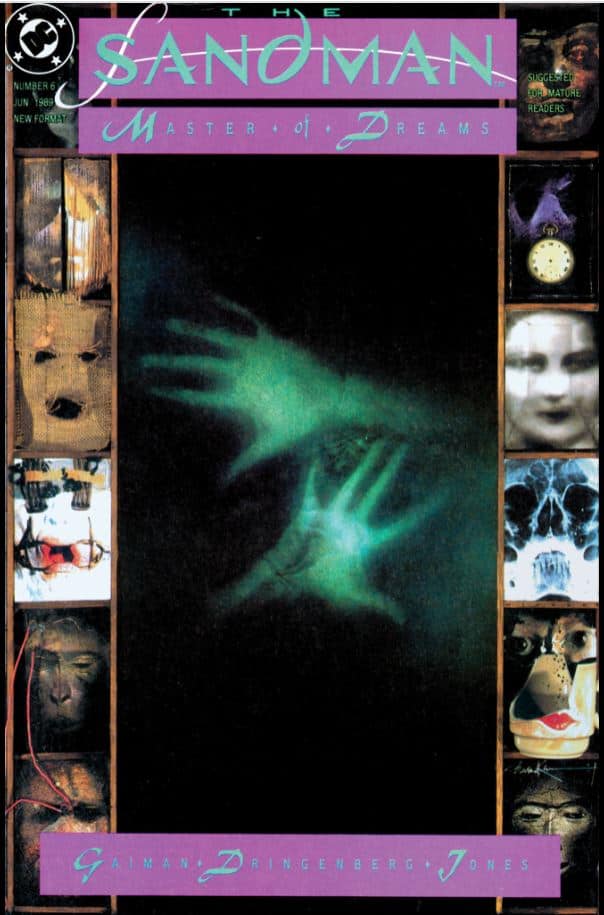 “Hour 1: The flies walk into the web.” There is something inherently terrifying about being trapped. No control as horrors awaits, inevitable death.  Often in gothic literature, castles, monasteries, large houses, and similar settings represent this fear of being locked up or trapped in ourselves. What about a 24-hour diner? According to Neil Gaiman, the answer is yes. The Sandman #6: “24 Hours” was released in 1989 through the DC Comics imprint Vertigo, written by Neil Gaiman, drawn by Mike Dringenberg and Malcolm Jones III, colored by Daniel Vozzo, lettered by Todd Klein, and edited by Karen Berger. There are only a few comic issues that I would call masterpieces, and The Sandman #6: “24 Hours” is near the top of that list.

The issue follows John Dee, also known as Doctor Dee and Doctor Destiny, as he controls occupants of a diner for 24 hours. Gaiman often took advantage of more obscure or forgotten characters and reestablished them for his stories. With The Sandman, Doctor Destiny fits perfectly into the story, and it feels like his entire history was leading to this issue. Doctor Destiny was created as a Justice League of America villain long before Sandman came around. First appearing in 1961’s Justice League of America #5, Doctor Destiny is shown impersonating Green Lantern and appears to control gravity. Doctor Destiny controls people by manipulating their dreams and altering reality with the materioptikon, which Gaiman retcons by adding that the materiopikon is actually the dreamstone that belongs to Dream, or Morpheus. 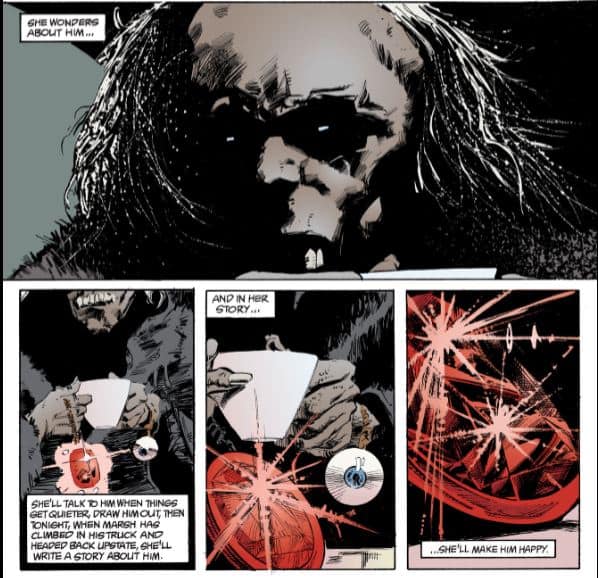 The John Dee of The Sandman is a far cry from his appearances in Justice League of America. Though there are several issues that deal with Doctor Destiny controlling members of the Justice League, much like he does in The Sandman #6. However, the Justice League are superheroes, not innocent bystanders. In Justice League of America #154, released in 1978, the League is able to break free from Doctor Destiny’s control by hypnotizing him and preventing him from dreaming, and later locking him up in Arkham Asylum. This encounter leaves him looking like a decomposed body with wide, sunken eyes, gray skin, and stringy hair, much closer to how we see him in The Sandman #6.  While Dream uses the dreamstone to bring rest and dreams to the world, John Dee uses it to bring chaos and waking nightmares. 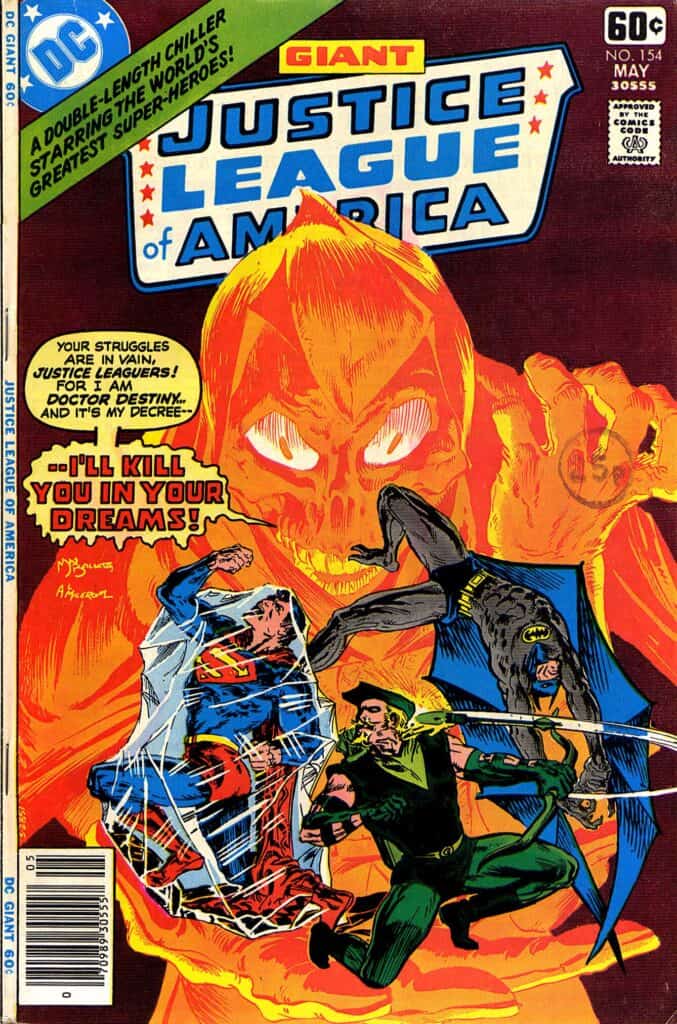 Nightmares play such a key role in horror stories. On the grotesque in gothic literature, Maximillian E. Novak writes, “if the gothic might be thought of as being close to the literature of fantasy and dream, it is the world of nightmare to which we must address ourselves.”  Novak continues with the idea that one goes mad every night, and the only way to cure it is to wake up. In The Sandman #6, the occupants of the diner are living out their nightmares. Upon being released briefly from John Dee’s hold, the realization of what is happening is only more maddening. It is hard to discuss nightmares, and dreaming as a whole, without mentioning Sigmund Freud. Freud’s “Uncanny” even mentions the Sand-Man, but this Sand-Man is one that takes out the eyes of children. Freud writes, “the feeling of something uncanny is directly attached to the figure of the Sand-Man, that is, to the idea of being robbed of one’s eyes.” John Dee fits the description of Freud’s Sand-Man much better than Gaiman’s. At one point, John Dee makes one occupant stab out their eyes with ice picks, literally robbing them of their eyes. The entire issue is surreal and uncanny, the occupants and the reader feel a complete loss of control that is extremely unsettling.

One page in particular displays the comic’s near-perfect execution of this psychological terror. During hour 5 we see two diner occupants standing and questioning each other about why it feels like they’ve been there for hours but also like they just arrived. Their panic is quickly resolved when they both agree that they love this place and sit down. This cycle continues over and over into hour six, where we see another occupant writing a letter to her partner asking for forgiveness after hitting her. In the background, the two occupants from hour five can be seen in their loop of standing up and panicking. 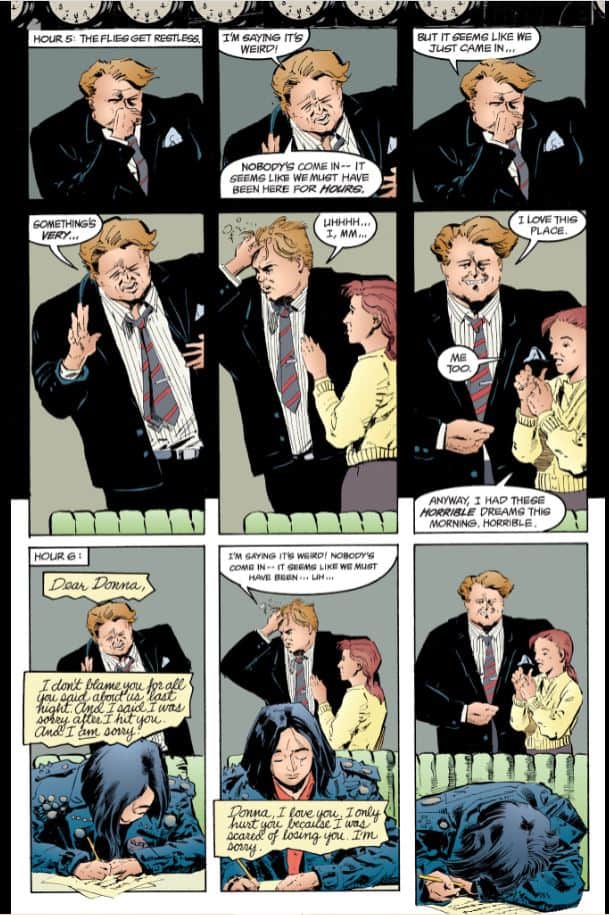 The occupants slowly lose their minds under the control of John Dee. One hour they treat him like a god, in another, he has them sing to him, or confess their darkest secrets.

We see John Dee standing in the diner surrounded by the dead occupants who John Dee made kill themselves or each other during hour twenty-two.

What is incredible about this issue is how Gaiman and the creative team are able to convey to the readers the feeling of dread and isolation that the diner occupants feel. The reader is shown that the rest of the world is in similar chaos, but the reader feels just as trapped as the occupants. Of all the comics I have ever read, this issue has stuck with me the most.  In The Sandman #6, the hero doesn’t save the day and there is an actual feeling that things are only going to get worse and worse. The reader feels completely trapped, like a fly about to be caught. If you haven’t yet, read this issue. Read all of The Sandman while you are at it. Luckily, getting your hands on a copy of The Sandman #6: 24 Hours is now easier than ever. You can get collected additions at nearly anyplace you buy comics or books. There are still plenty of single issues floating around, as well. On top of physical copies, you can read digital versions on Comixology and DC Universe Infinite. There is an excellent fan film online titled “Sandman: 24 Hour Diner,” an audio adaptation through Audible, and it has been confirmed that the upcoming Netflix adaptation will feature an episode based on the issue.