Throwback Thursday: DAREDEVIL #282: Daredevil is in fact Running Up That Hill 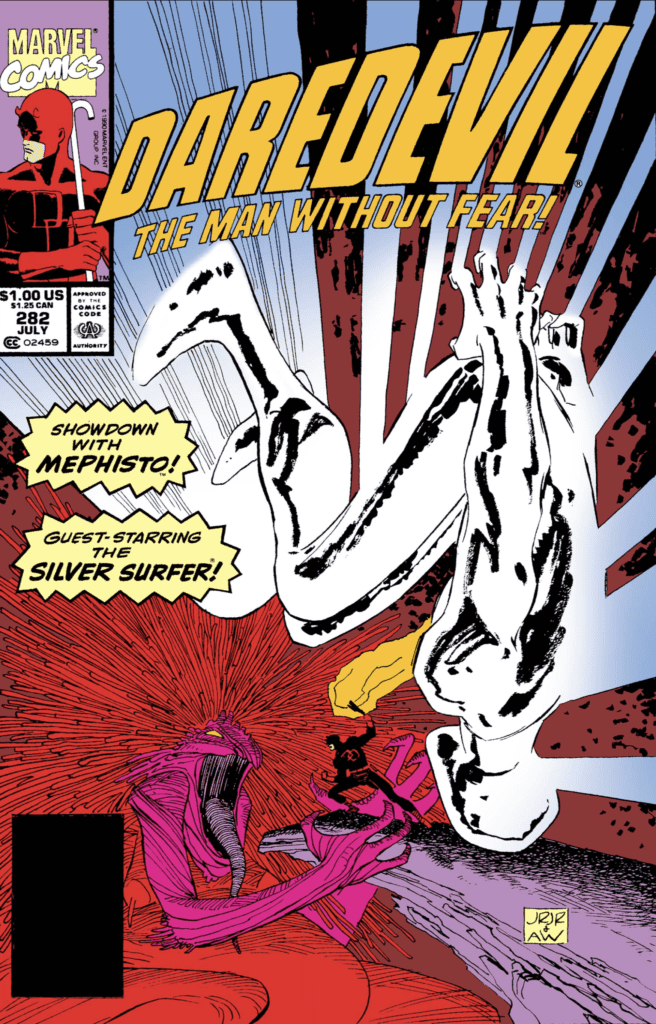 Marvel is planning to relaunch a new Daredevil title after the Hornhead-centric event Devil’s Reign, with the continuing creative team of Chip Zdarsky and Marco Checchetto. The event saw the “death” of Matt Murdock and the shedding of that identity in favor of the hero working with Elektra to wipe out The Hand for good. Zdarsky has gone on record and stated that Ann Nocenti’s run on the title, which followed Frank Miller’s seminal run, is a major inspiration to his approach for the character. This upcoming relaunch feels like a spiritual sequel to the themes and primary conflict of Nocenti’s run, which was often illustrated by John Romita Jr. before the artist would team up with Miller to create the foundational origin story for Matt Murdock in the ‘90s.

Nocenti’s run had the challenge of following what’s considered by many to be the best Daredevil story of all time, Born Again, and had an uphill climb to rebuild a broken-down Matt Murdock. In true Nocenti fashion, she breaks away from comparisons to the writer before her by diving deep into the psyche of the hornhead, along with plots tackling relevant socio-political and spiritual issues of the time. That doesn’t mean Nocenti steps away from the core aspects of Daredevil comics, and there’s plenty of street crime, overwhelming pressures from the Kingpin, and a backdrop of law and order. But the DNA of the run is steeped in a clashing ideology for Murdock, who like the book itself, wanders through snapshots of a world gone crazy, both in the physical and the abstract.

Issues would jump from plots about genetically engineered meats, to killer robotic vacuum cleaners, to a sexually charged clash with breakout villain Typhoid Mary, and then throw an in arc dealing with a young boy blinded by Kingpin’s industrial waste. Nocenti tells a complicated, thematically rich story across her time in the book, and leads the arc to a spiritually complex conclusion with Daredevil #282. Nocenti would go on to script two more issues before leaving the book on a perfect note, but 282 is a firm conclusion to the multipart tale that cements the post-Born Again identity for Murdock.

The issue – which was penciled by Romita Jr., with inks from Al Williamson, colors by Gregory, and letters by Rick Parker – starts with Daredevil in Hell, or at least a hellish dimension depending on one’s interpretation of Mephisto. Matt’s wandering and pondering his resolve as he has a verbal back and forth with Blackheart, Mephisto’s son created by Nocenti and Romita Jr. From page one, Nocenti makes clear she has a perfect voice for Matt, blending a grandiose and morose diction with a philosophical insight into his blindness and its relation to surviving Hell. From there, the issue follows as Daredevil makes the case for humanity as he endures his companions being tortured and killed by the demons until the Silver Surfer appears and defends the group. Daredevil wins the moral fight with Mephisto and Blackheart by proving that they win by not fighting with evil but turning the other cheek, as Murdock eloquently puts it.

That conclusion enrages Mephisto, and without Surfer’s intervention, would see the end of Daredevil, the Inhumans Gorgon and Karnak, and a genetically created perfect woman. As the Silver Surfer wages a war against the hellish beings, Daredevil and the survivors leave and reflect that they and the He upstairs will always offer forgiveness to the demon. Nocenti caps off the exchange with perfect narration, and the group returns to Earth, in a beautiful field of grass, with the dead compatriot watching over them as an Angel, having ascended to a better place. It would be easy to label Nocenti’s ending a deus ex machina because of its sudden solution, but that ending feels so thematically powerful and earnest that it is easy to accept. Matt’s declarations to Mephisto crystalize Matt’s philosophy and the essence of his being after being dragged down hell and back. While he may take the visage of the Devil for his mission, it’s clear that Matt is, and will always be a man of God, who believes in foundational freedom in humanity that ensures that no one is ‘just’ good or evil.

Nocenti is getting to merge metaphysical, cosmic, and street-level in this story, putting Daredevil, the Silver Surfer, and Blackheart into a collision course. Romita Jr. matches that energy from the script and at every turn dials it to 11. The issue is full of beautiful splashes, and there’s something in the way that Romita Jr. renders the Surfer flying through the cosmos that is breathtaking even now. The way Romita can play with anatomy and shapes to illustrate speed is original and gives the illusion of something traveling at the speed of light. Romita’s pencils alone are amazing in this instance, but the colors and inks compound to shift that effect of movement into the next gear. That image of the Surfer takes up the top half of a splash on page 11 (in the Marvel Unlimited copy of the issue) and is evocative of Alex Ross’s artistic style.

The page also highlights Romita Jr.’s powerful pencils when rendering Blackheart and Mephisto, still using the reptilian designs for the character that make the characters so much more interesting to see. Mephisto has heft and pudge to his design that evokes something more akin to a whale or walrus, but it’s a different thickness than the one usually reserved for a character like Kingpin. Mephisto and Blackheart are these aliens, twisted figures that lord over Daredevil and his companions. The Surfer matches that alien design, but there’s something more fluid, and softer in his lines, and Romita gives both figures the chance to come into conflict towards the end of the issue. It’s Kirby Krackles and hellfire that erupts in the fight, but Romita never loses the emotional throughline of Daredevil as these larger-than-life figures battle.

Daredevil #282 is the pinnacle of Nocenti and Romita Jr.’s time on the series, encapsulating the scope of plots and themes that Matt Murdock was forced to endure to regain himself. Frank Miller’s set-up for Nocenti’s run was echoed through Devil’s Reign, and the relaunch is working to tackle the character of Matt Murdock in the same way Nocenti did. It’s not hard to see why Zdarsky was drawn to this era of the character. With Matt and Elektra going up against The Hand (and the Punisher based on recent events in the Marvel universe) that thematic complexity of good and evil in the face of unanchored humanity. I wouldn’t hesitate to call Zdarsky’s run the spiritual successor to the one-two punch of Miller and Nocenti, and for a full appreciation of the current series, I think reading Nocenti is essential.

Throwback Thursday: DAREDEVIL #282: Daredevil is in fact Running Up That Hill