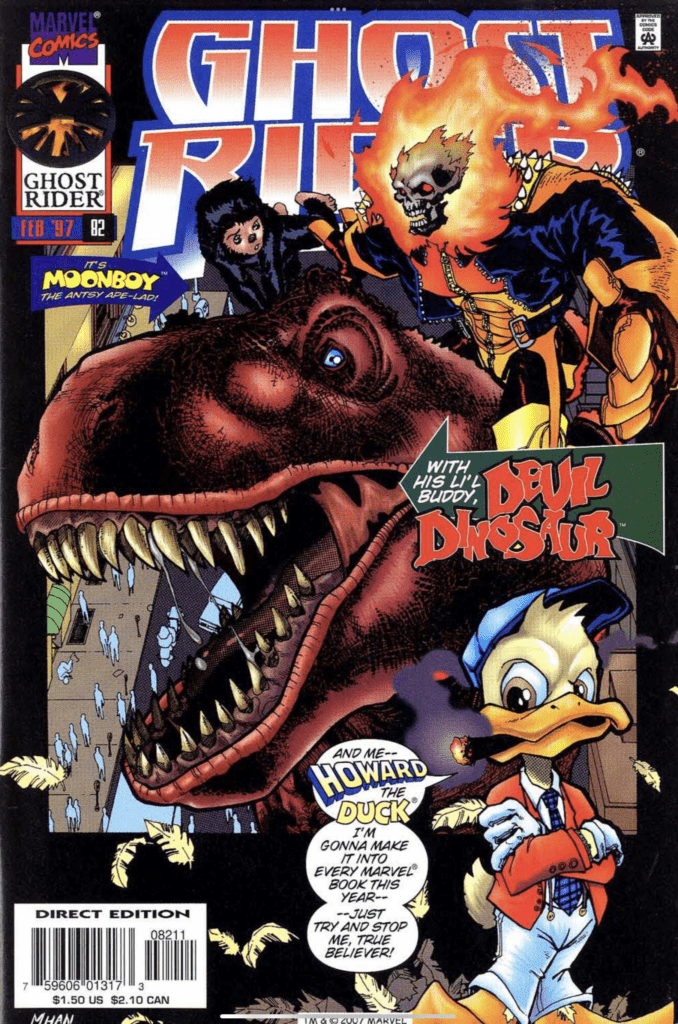 For some characters, the pinnacle of their existence is a transcendental, everlasting story arc or character trait. While for other characters, their design or aesthetic is what stands the test of time. For a character like Marvel’s Ghost Rider (in any incarnation throughout his recently crossed 50th anniversary), the pinnacle is a sweet tattoo design, all flaming skulls, motorcycles, and chains. That isn’t to say that writers and artists haven’t worked to put their stamp on the character or take them to interesting places, as this week’s Ghost Rider 50th anniversary one-shot proves. But at the end of the day, when the name Ghost Rider is mentioned, or the character appears in another title, or the larger cultural zeitgeist, the design is going to take priority in most peoples’ minds.

In the span of the spirit of vengeance’s publication history, an issue like Ghost Rider #82 – written by Ivan Velez Jr., with pencils from Pop Mhan, inks by John Lowe, colors by Brian Buccellato, and lettering from Richard Starkings and Comicraft – proves just how far good designs can take the character, and vice versa. The story is an installment of the ongoing saga of Danny Ketch, the long-lost half-brother of Johnny Blaze (who has relinquished the mantle of Ghost Rider) and picks up as Ketch takes his mother home from his sister’s grave. The two are swarmed by crows and Ketch believes it to be an attack coordinated by the villainous Scarecrow.

That’s the bulk of the crow storyline for this issue, as the remainder of the page count is dedicated to the adventures of Johnny, who at this point in Marvel history is going by Blaze, wielding a hellfire-imbued shotgun. He’s working with magic user Jennifer Hale to try and send Howard the Duck back to his reality, but the spell goes wrong, and they instead summon Moon Boy and Devil Dinosaur to New York, where the two proceed to cause wreckage. Ketch sees the chaos on the news and decides Blaze needs his help, spurring the Ghost Rider to appear and assist in subduing Devil Dinosaur. The issue then sets up a potential reunion between family members as Danny’s sister has seemingly risen from the grave.

The issue is honestly a mess in the best way possible, and unlike many comics of the here and now, delivers on the cover art offered. Velez Jr.’s script is littered with verbose prose and extended internal monologues that feel stilted and forced. For a character like Ghost Rider, less is more, and it’s a good sign that modern writers like Ed Brisson and Ben Percy have learned that lesson. In this issue, Ketch’s spirit of vengeance speaks like any other Marvel hero, reflecting on their decision and the images unfolding across the page, and it shows a lack of faith in the art to convey story and emotion. The issue works at its best when Velez Jr. lets his prose take the back seat to Mhan’s art as the seemingly random elements (magic, interdimensional ducks, prehistoric dinosaurs) of the issue clash.

Mhan does a great job with a majority of the issue, but the place that his art is lacking is the Ghost Rider figure. The style of the issue resembles an attempt to mix the blockiness of John Romita Jr.’s anatomy with an anime aesthetic, which leaves the Ghost Rider figure disproportioned and stiff. The anime/manga styling also gives the Ghost Rider skull an almost cartoony face and expressions that undercut what makes the character work best. Outside of the Ghost Rider design, the only other weird choice is the design of Blaze, which does fall in line with the era’s sensibilities, but ends up making the character look like a male Elsa Bloodstone. But outside of those two elements, the rest of the book looks great, Mhan’s style is a perfect fit for characters like Howard and Moon Boy, and he does an amazing job rendering Devil Dinosaur, and the action as they all fight across New York.

Ghost Rider #82 is proof that sometimes you can win with style over substance, which is the case for much of Ghost Rider’s publication history. The issue delivers on its promise of Howard the Duck, Moon Boy, and Devil Dinosaur, and the Rider getting into a brawl across the pages of the issue, doing so with pretty solid art. It’s highly doubtful that Ben Percy’s going to throw Howard the Duck or Moon Girl and Devil Dinosaur in his current supernatural horror take on the character, but we as fans can always hope.