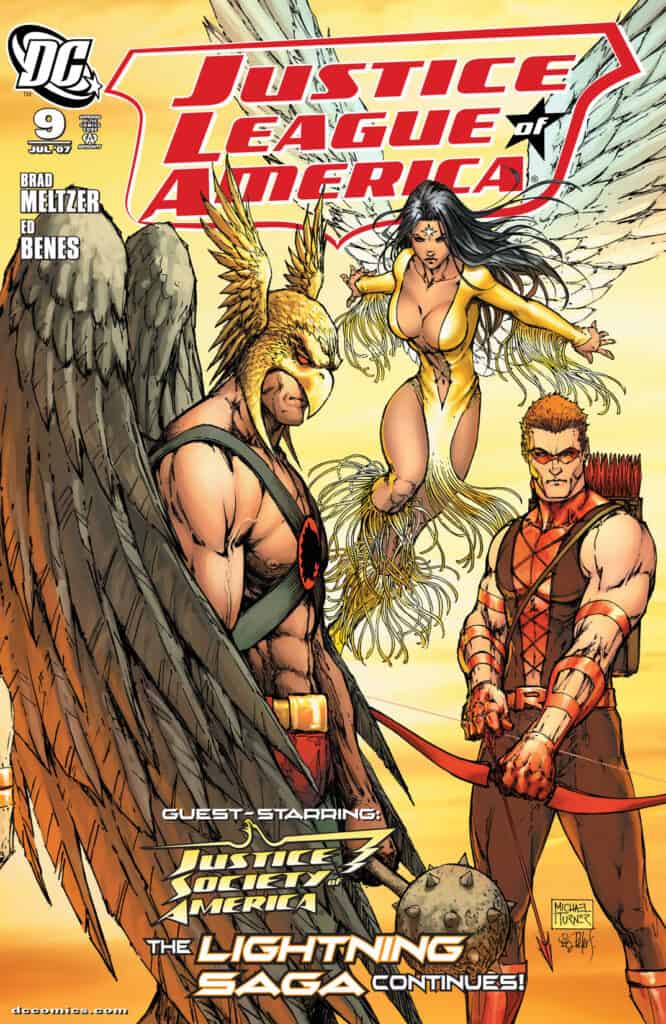 The world, and the multiverse were never the same. Just days after the Infinite Crisis, by Geoff Johns, Phil Jimenez, George Perez, and Jerry Ordway, and the world was still dealing with the aftermath. Some benefited all the better, while some fared better, some just couldn’t recover from it. The JLA and JSA, probably the most important teams to the DC mythology, had been put through the ringer, and DC decided it’s time for another reboot, or more accurately a retroboot. If you don’t know what a retroboot is, it’s exactly as it sounds. We go back to a period of time where the continuity picks up where it left off, and in this case, from the end of the Magic Wars which marked the end of the Levitz run. Not everything was the same, as seen in the Tornado’s Path arc, and Val Armorr, the original Karate Kid, was alive, and a part of this group of Legionnaires who were mentally sent to the past to bring back someone who has been an integral part of the DC universe since the first Crisis. The concept should be pretty straightforward, but of course there’s a stupid reason why they couldn’t just come together to fix everything.

This storyline was helmed by acclaimed author Brad Meltzer, who despite being a relative newcomer to comics had created quite the buzz with mixed reception of the Identity Crisis storyline from a few years earlier, and Geoff Johns. Johns was DC’s golden boy at the time, who rose to fame after revitalizing the JSA, brought back Hawkman, and had recently revitalized Hal Jordan’s return as the main Green Lantern again. Everything he touched just turned to gold. These two writers had a deep love for the classic DC universe, and you could tell. On art duties we had Shane Davis, and Ed Benes on the Justice League, while we had Fernando Pasarin and Dale Eaglesham handling the Justice Society, and while their styles are so different from each other, it wasn’t that jarring. Especially Eaglesham’s JSoA. It just felt nostalgic, and left me with a warm fuzzy feeling. 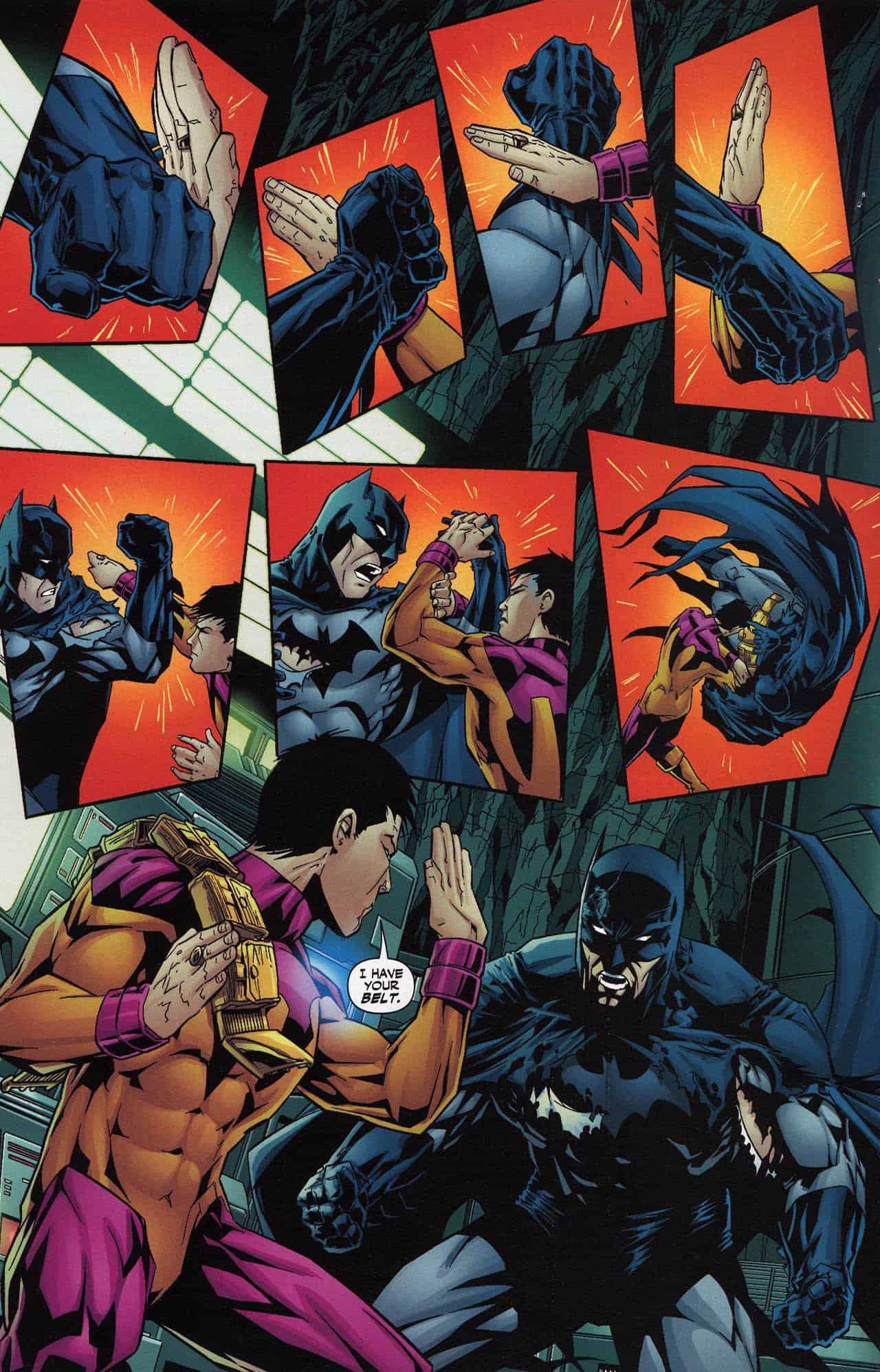 This is why Batman always win. He cheats.

The crossover was a pretty decent throwback to a time where these two teams would have a “Crisis” every year, and they’d have a team up, despite being on two separate earths. I kinda wish the Justice Society had been returned to the recently returned Earth Two, especially since the original Superman from Earth Two had been returned to DC’s continuity. Honestly, the lack of use and proper development of their multiverse since the end of Infinite Crisis has been the largest glaring misstep that DC had. There was so much potential there, and they just let it slip away. I understand the reason, they felt that if a book wasn’t set in the “New Earth” (the post Crisis that was the stage for the modern DC universe), it wouldn’t be viewed as important, but I don’t think the rest of the DC fandom thought the same thing. What shoulda/woulda/coulda been. 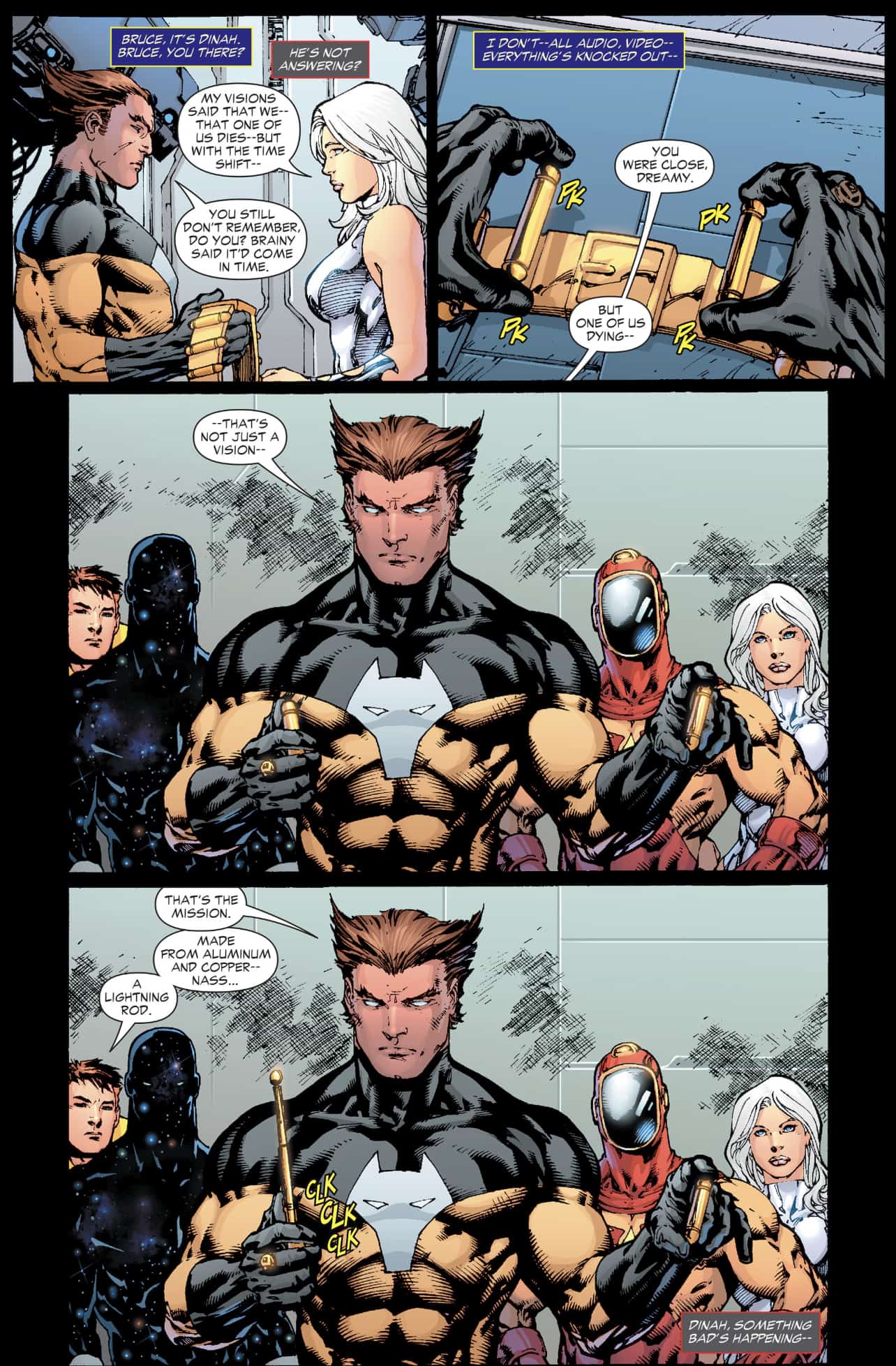 Now that I’ve discussed my post Infinite Crisis grievance, let’s discuss my favorite parts of the crossover—the return of the Legion of Superheroes!!! After Wonder Woman, my favorite DC property is the Legion of Superheroes, every iteration of them. Sure, there are versions that I like more, but overall, the message is still the same. They’re all working together to form a better world. It made for a slight bit of confusion, because DC was publishing a LoSH title at the time, with a different set of the Legionnaires (they were affectionately called the threeboot Legion), so unless you were a long time fan, it’s understandable that you’d be confused here. Unfortunately this storyline wouldn’t be picked up until later, during the Final Crisis, Geoff Johns, and the incomparable George Perez, would give us a story titled Legion of Three Worlds (Supes would name drop it here tho!) 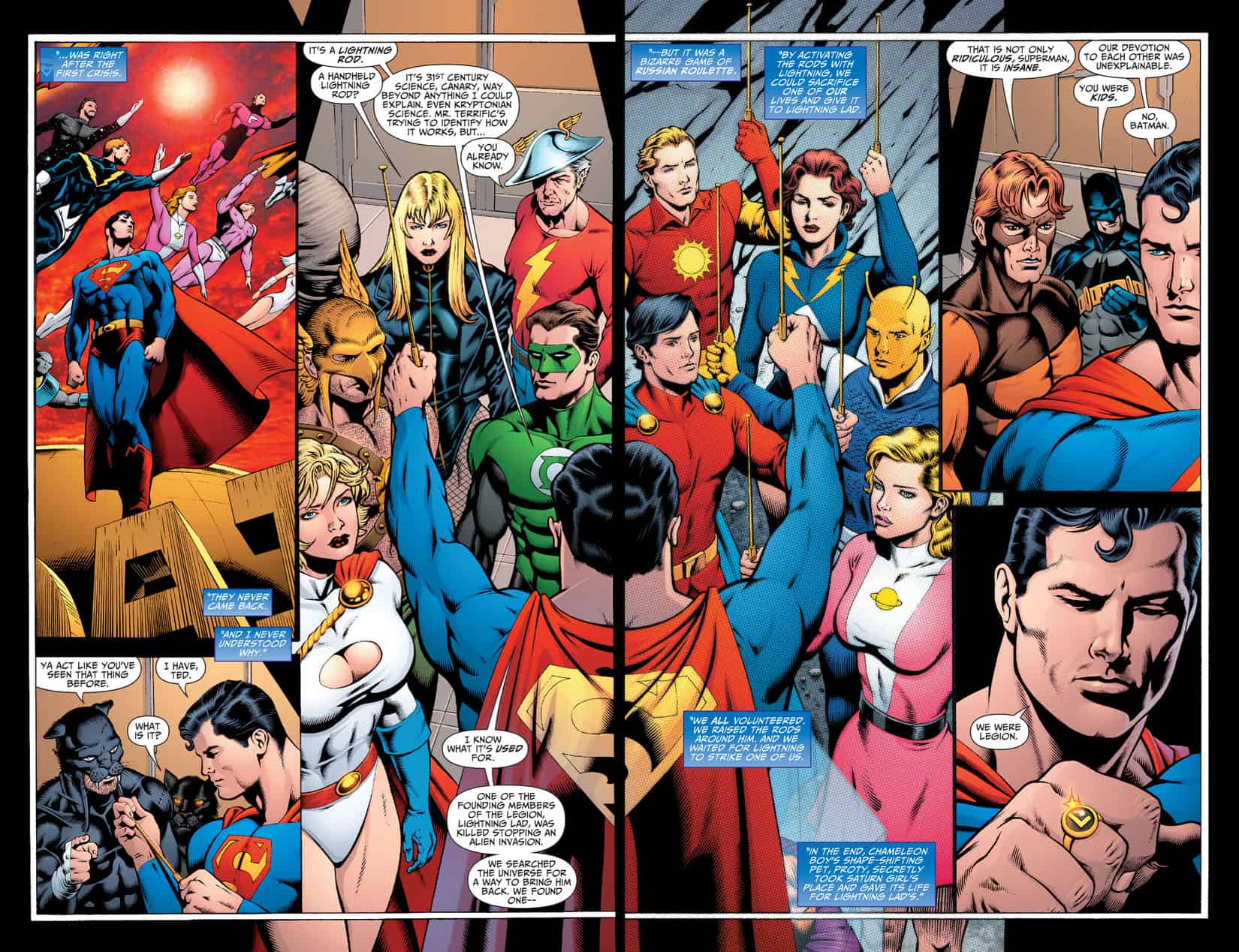 There were some inconsistencies here, like the original Karate Kid was back without explanation, and I’m not sure if it was ever addressed after (I could be wrong!) He had died 5 years earlier (1984) in the Baxter series, and the Legionnaires here were fresh from the Magic Wars, but overall it was fun to see these teams all together again. I’ve always been a DC fan over Marvel, and I know I’m probably in the minority (especially when you go buy the books sold, and the market share), but the DC universe just spoke to me more. Maybe it was the image of me at 4 years old watching reruns of the Lynda Carter Wonder Woman series, twirling around and around with hopes that I’ll transform into Wonder Woman, or reading stories of kids who come from all walks of life, who despite having the odds stacked against them, come together to make the world better for the future than the present they’re given. It’s that sense of optimism and hope that’s stuck with me all these years, and that’s what makes this team so great. 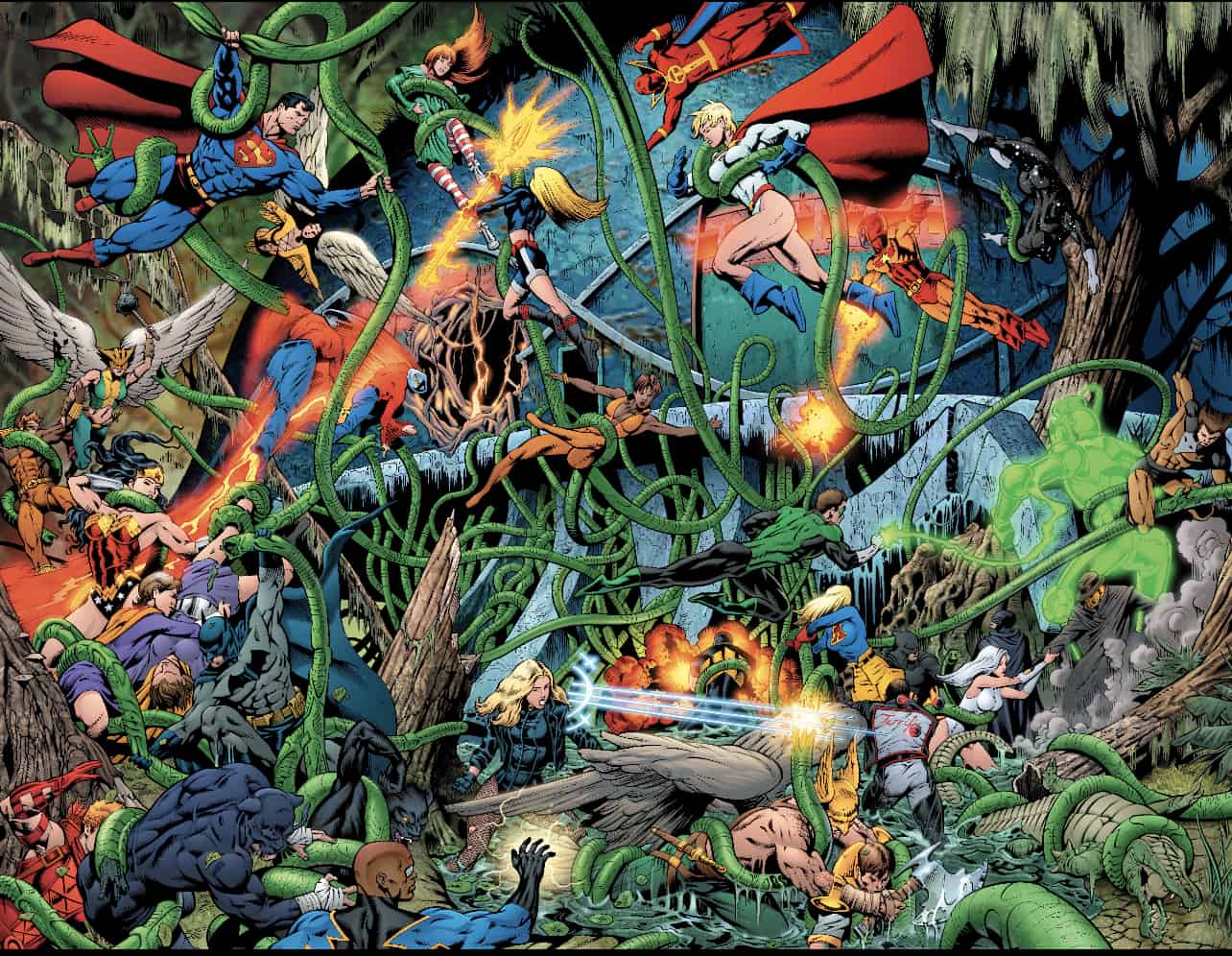